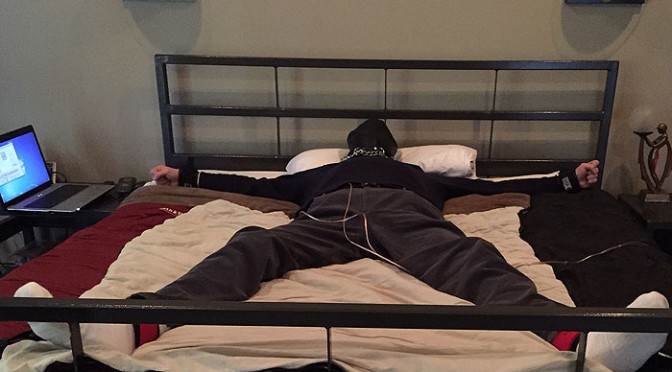 The morning started off with some punishment for me. Sir strapped me down to the bed with e-stim straps around my cock and balls and another strap across my ass. Using his PrisonGuard program, I was subjected to e-stim punishment for the best part of an hour. PrisonGuard was in control … It worked in two modes … Punishment mode and rest mode. In rest mode there was no power being supplied to the e-stim box, and I could rest in my spread eagle position. In punishment mode, PrisonGuard would randomly send power to either the straps around my cock and balls, or the strap across my ass, or BOTH!! I can honestly say, the e-stim to the cock and balls was the toughest to cope with, be it on its own or in conjunction with power being sent to the ass strap. When power was sent to the ass strap alone, I could endure it better but it was still intense! PrisonGuard would randomly pick how long it would spend in each mode. So at one point I had about one minute in rest mode followed by nine minutes in punishment mode!! As I lay on the bed, when the hood wasn’t on, I could see the countdown on the screen as each mode played out. It seemed to take forever for the punishment modes to pass, but the rest modes would fly by really quickly. As the final ten seconds of rest mode counted down, I would brace myself knowing that once that counter hit zero, something in my pants was about to get fried! During the whole punishment session, Sir sat on a chair, or on the bed next to me, watching his Boy being punished, and sometimes offering me a pat on the head for some reassurance from him … Woof Woof!!

This afternoon there was a knock at a door, and Sir got a nice big box in the mail. It was a present he had treated himself to for his birthday, something he has had his eye on for years and always wanted … It was the Mr. S Leather Deluxe Leather Sleepsack Fetters USA!

Sir has had his eye on this for years, and he decided it was time he got it, and Woof Woof does he love it!! He got it with all the optional attachments on it, and it’s a very professional piece of kit indeed! Once we had time to examine it, it was time to give it its initial test run. I put him into it and zipped it closed around him and then strapped him shut into it. The interior is leather lined, making it a very snug fit, and the build quality is so good that he said it’s very comfy, snug and escape proof! This is just our initial test run of the new sleepsack, and right now, as I type this, I can hear Sir snoring away like a content bear fast sleep in his sack. WOOF!! And if you look to the left of that picture, you can just see the corner of our cage where I am locked away just about every night after dinner. I very much enjoy being locked in this cage, because it is right beside my Sir’s bed, just where Sir’s Boy should be … WOOF WOOF!!!

Get the sleepsack here

Metal would like to thank Paul for this report, and for the pictures!

Hi Metal, I thought I’d share this with ya, something you might enjoy. I’ve recently just came home from a vacation in Los Angeles and while there I got to experience some cage time. Not much, granted, but some.

The first was at the Rough Trade store, they have a cage at the bottom of the stairs on the ground floor, and I was able to sit into this. WOW!! What a rush!! Once the door was closed over (it wasn’t locked), and I could take in the whole environment, I found it a very thrilling and very arousing experience.