Chapter 17: Preparing for Your New Career in the Hospitality Sector

Two tall young slappies jumped out of the van.  One opened the door for Mr. Williams; the other took charge of Kristian and me.

We were told to face the van, and we heard our shackles being unlocked and falling onto the concrete.  Then we heard, “OK, I be gettin you in now.”  “In” meant the luggage compartment—a windowless steel box with a tiny grille through which we glimpsed, for a moment, the luxurious compartment where Mr. Williams was now positioning himself amid pale green leather upholstery.  In the luggage compartment there were hooks on each side, up near the top, to secure any cargo that might get loose.  But now we were the cargo, and we were attached to the hooks by our cuffs.  A few moments were required for the slappie to push us into place, facing each other; then the hooks clicked shut, the door slammed, the slappie’s heavy boots pounded their way to the driver’s compartment, and the delivery van was in motion.

I’d never felt one way or the other about Kristian, but riding in a box with your hands trussed above you and your boots and butt fighting for space with another guy’s boots and butt, while the other guy mutters “Vere are ve going?  Vere are zey taking us?” is enough to make you tell him that if at this point he can’t say “w” he should shut his fuckin mouth.  Under stress, he had reverted to “Viking” mode, but just the fact that we were both wearing browns and we were both being shipped to the same place–when I looked at him I saw myself, and that was enough to make me hate him.  Not so long ago I’d been sleeping in one of the best rooms at the King George, and from what I’d picked up from Kristian, he’d been backpacking in some kind of hostel.  It didn’t matter; we were ending in the same place.  I’d heard that inmates of hell all hate each other.

When you can’t see outside, all stops are sudden, so it came as a surprise when the van came to a halt and we heard doors open up front.  Naturally, Mr. Williams would exit first.  We heard one voice saying “Good day, Mr. Williams,” and another, at a distance, saying, “Welcome back, Mr. Williams.”  Those must be the slaps that waited at the entrance to the hotel, and I prepared myself for a walk in chains through the gold and marble lobby.  But the van started up again.  When the back door opened and we were unhooked and dragged out, our legs falling like lumber onto the pavement, we found ourselves looking, not at an elegant stone façade rising up from a fashionable street, but at a brick wall staring down at a dark narrow alley.  A line of dumpsters testified that this was the back of the hotel.  The black steel door was the kind you usually see at the rear of a place that has a restaurant.  It needed to be steel, to keep the stink out of the building.  There are a lot of sickening things you can smell and see if you happen to stroll “around the back” of an expensive venue.  Something that this one lacked was the small grubby window that lets you glimpse life inside the kitchen.  This wall had a window, but it was painted black and covered with bars.  And when the driver unlocked the black door and motioned us inside, the first thing we saw wasn’t a kitchen–that must be someplace else.  What we saw was a big, low-ceilinged room with a slappie sitting at a battered wooden desk.

The slappie at the desk looked up.  It was a surprising sight—if there was ever a slap that actually looked like a CEO, this one did.  He was white and tall and fit.  His cheekbones were high and his nose was straight.  His eyes and his hair—short but wavy—were a deep, dark gray.  Except for his slappie suit, he looked like he was about to convene a meeting of the Board.

“You two can go back to the motor pool,” he said, taking the folder.

“Yes, boss,” the driver replied.  His buddy took off our cuffs and hung them on a wall, and they departed.  Kristian and I were standing at the desk like two bad students who’d been called to the principal’s office.

The boss’s voice was east-coast American.  It was the voice of someone who had gone to Yale, which maybe he had, before something happened and he had to dress up in browns, complete with “My Name Is Derek.  How May I Serve You?” stamped on his shirt.

He spent a minute finishing something he was doing on the desk.  Then he looked at us and said, “I’m sure you don’t know this, so I’ll tell you: the King George Hotel is the premier hospitality destination of this island.  The owners intend to keep it that way.  For that reason, they employ a large staff of slappies.  That’s why you are here.  If you give the hotel its money’s worth, things will go well for you.  You’ll get your grub and your browns and your bunk, and I’ll leave you alone.  If you don’t, you’ll wish that you had.  If you understand me, say ‘yes boss.’”

“Your work will be assigned to you.  You will do your work.  You will not complain, and you will not talk to freemen, unless the freemen talk to you.  If they do, you will say nothing about yourself or any other slap.  You will say nothing about what goes on down here in the quarters.  You will give the freemen Yes sir and No sir and Very well sir, and that will be all.  If you receive an order from one of the freeman staff, you will follow that order.  If you receive an order from a guest or a freeman on the street, you will say ‘Thank you sir, I must discuss that with my boss, sir.’  Do you understand?”

He reached into his desk and pulled two small objects out.  They were round steel tags with “KGH” inscribed on them.  The letters were silver, and there was a gold-colored crown on top of them.  “Bend down,” he said, and he clipped one of them to the front of my collar, like a dog tag.  “Now you’ll remember who owns you.”  Then he did the same to Kristian.  I noticed that Boss Derek was wearing the same tag.

The boss opened an old dented laptop, looked in the brown folder, and pounded something into the keyboard.  I heard a loud, conclusive sound.  “That’s your limits,” he said.  “Three hundred feet.  That’s your radius.  Go outside of that, you will be caught and punished.  Severely.”

“Dev!” he shouted.  No, he didn’t shout—he spoke the words, and it was as if he’d shouted them.  Immediately one of the brown shadows that had been lurking in the back of the room appeared at his side.

“What should I call them, boss?”

Dev was a slender young Indian, so slender you could pinch his side between your thumb and forefinger.  The collar on his neck might have been heavier than his head.  That’s the way he looked.  He was the kind of slappie that looked more impressive in his uniform than he would in freeman clothes.  So I guess I wasn’t surprised when he said, “First thing I’m gonna do, I’m gonna get you your uniforms.”  He gazed reproachfully at the browns we were wearing.  “Your PERMANENT ones,” he said, and walked us back through the big room.

There wasn’t much in it–a long table with 20 or 30 stools along it, some chairs off to the side, some lines of fluorescent lights on the ceiling, and a slappie swabbing the floor with a mop.  That was all the furniture I saw.  The back of the room was lined with barred doors.  Through one of them I saw stairs leading up.  Through the others I saw storage rooms.  Brooms, buckets, green stuff in 20-gallon plastic cans, shelves full of brown stuff that had to be uniforms.  Dev angled us toward one of the rooms and opened a heavy padlock.  Inside there was a table but no chairs.  The walls were crawling with slappie clothes and slappie boots.

“I call this my I.D. Haven,” Dev said.  “Here’s where I change you dudes out.  You gonna go from nobody to somebody, mon.”  He’d been speaking American English, but islan’ talk was charging in.  “I mean, thee Coop send you out with nothin but you basic BROWNS.  Only NAME they give you is that number on you collar.  Sound like an ol’ song, right?  ‘How much is that number on my collar?’  I doan know how I know that song mon.  Course, you pay one big price for you number, dude!  Like we say, you goan WORK for that number!  But anyways, right now, you got no MARKINGS on you.  Not like me!”

He pointed proudly at his left pec.  Yeah, there it was, the “markings” you saw on every slappie’s chest:  MY NAME IS, and the rest of it.

HOW MAY I SERVE YOU?

He was right — compared with that, my chest was empty.

“I got the same stuff on my ass, dude!  But you can study that later.  Right now, strip off.  Browns in thee bin.”

The “ass” comment—how gay could he get?

I was just taking my shorts down.  There was a steel bin in the corner, and our clothes were going in there.  “Thirty-six,” I said.  Kristian said “32.”

“Ver’ well!” he said.  “That’s what Boss Derek always sayin—‘very wellll.’  You think he was English!  But I figure, ALL slaps comin from thee SAME place.  Anyways . . . . ”  He pointed at the stacks of nicely folded browns.  “Like you seein, thee BASICS are already print’ on thee suits—“My Name Is,’ ‘How May I Serve You?’  All pre-print’!  Ver’ nice.  But now it is my honor an privilidge to do thee rest an letter in YOU YOUSELF!  By which I mean, to ink up you OWN name an number.  So when somebody seein ‘How may I serve you?’, that question is comin from you!  Any question mon?”

Nothing except how did a little American guy get to be a slappie like Dev?  But neither of us asked it. 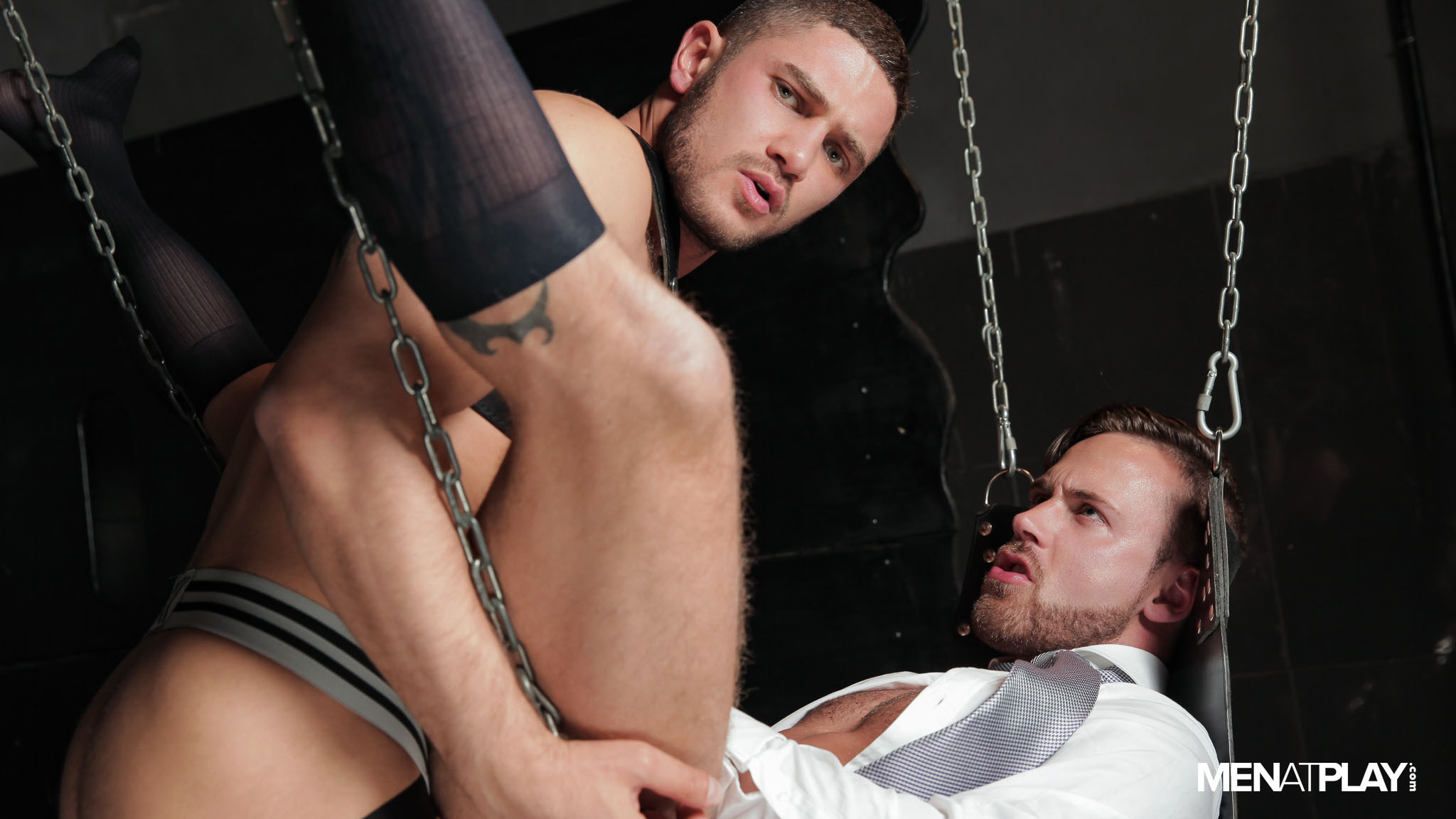