The officers didn’t say anything, they just unlocked a big wooden door and a door made out of bars—wow! bars!—and took me along a little sidewalk, and there was a building like an old garage and it had bars across the front and they put me in there and locked it up and went away.  Oh, they also took the cuffs off, cuz now I was in a cage and maybe I didn’t need them.  Maybe some other dude did!  Anyway, now I’m in this thing like a cage, and of course I’m lookin out through the bars to see what I can see.

First thing that grabs you is a big hunk of concrete, like a runway for a plane, a small plane of course, because it didn’t look like a mile long or anything.  Then there were a lot of wooden buildings lined up around it, mostly sort of long and narrow, though most of them I couldn’t see very much of, because of the bars and I had to crane my neck.  It looked kind of like that old army base I saw from the freeway, but everything was painted brown and it obviously wasn’t supposed to be some kind of exhibit of fighting spirit or pride or whatever, and actually if the roofs hadn’t been so straight and clean you would have said that maybe it was abandoned.

I looked at it for a long time and then some slappies came by.  Three of them, and they slowed down and yelled a few things, like “Where’d you get that shirt?  Steal it?” and “What kinda monkey do you think that is?” and “That ain’t no monkey, that’s an ape!”

So they were having fun, and I gave them a smile and hey! they walked over and talked to me.  There was an Indian and a couple of white boys, and it was interesting that I was behind bars and the boys in brown were outside walking around.  “You new here?” one of them asked, and we all laughed about that, and there was no point in being shy, so I said, “Can you tell me what I’m lookin at?”  Then they pointed at some of the buildings and said that’s thee chow hall and that’s thee laundry and right there is thee barracks where you gonna be livin mon.  So, very cool, but they had to leave and then I was alone again for a long time.  That was OK, I guess, cuz I got to think about what I was seeing, and I thought about how nobody I knew would believe that any human being could possibly live in that place.  Damn! I thought.  I shoulda asked Sergeant Henshaw how the wifi was!  I’d never made a lot of jokes, but I thought that was a pretty good one, even though I was telling it to myself.

So I was really interested in looking at the place where I was gonna be livin mon.  But after an hour or so, I guess, the two SLP cops came back and unlocked the cage and took me out and pulled me up the steps of this little house, I guess you’d call it, which was right next door, and there were a couple slappies in there, a white guy and a black guy, and the cops handed them some papers and said “Fix it up” and they left, and I was alone with the slappies.  They were, I dunno, a few years older than I was, and they were pretty hot.  Their shirts said that the white one was Jojo and the black one was Malcolm.  So it was Jojo and Malcolm and “it.”  I was “it.”  But they were slappies, so maybe they’d talk to me.

They stood and looked me over.  “Another country club kid,” Jojo said.  “Defnitly,” Malcolm said.

Which surprised me, coming back like that.  I usually wasn’t that quick, and of course I didn’t want to piss anybody off.

“I’ll say,” Malcolm said.  “We makin sure a that.  Take off you clothes and throw em in the bin.”  So much for my nice slacks and my VERY attractive shirt and my fairly expensive loafers, and I was totally naked!  Actually, if it hadn’t been for those shots I took of myself for Step 2, I probably would have been, like, really shamed and embarrassed to be performing with my dick out that way.

But talking about exposure—one of the first things they did was to search all of my “cavties,” which meant mouth, pits, under my dick, and yeah, inside my ass with a hand wrapped in plastic.  Maybe these slaps did it because the cops didn’t want to, but it seemed like Malcolm and Jojo were arguing about which of them was gonna do it to me, and Malcolm won so he did it!  Of course I’d been fucked before—P and D took care of that—but this was a lot less fun.  Educational, though!  I’d heard about gettin sex pleasure out of stuff that isn’t really “sex,” and I got the idea that this was what Malcolm was doin.  Yeah, definitely.  And you know what, I was sorta gettin into it too.  Though less than he did.  And most of my good feelings came from imagining that I was doin it to him.  But when you thought about it–and I had a pretty long time to think while he was reamin my butt–that’s why I was there.  I wasn’t there to get nice stuff and “enjoy” myself all the time.  I was there to be made into a slappie.  In other words, I was there to get totally butt fucked.  And I sure felt more like a slappie when it was over.  Pretty sore, though.

Next up, a shower in an old broken-down bathroom.  The SLP doesn’t waste any paint!  And of course the hot water handle doesn’t work, probably because there isn’t any hot water.  Weird that I would just expect it to be there when I got into a “shower.”  Really wakes you up, though.  Turns “slappie” into FUCKIN SLAPPIE!  And I did appreciate the bars on the little bathroom window.  It was like, if I had any second thoughts while I was in there alone, there was that extra level of insurance.  Then back into something that looked like the dining room in some old person’s house, sort of small, dark wood, and whatever, except that the paint was all nicked and there wasn’t hardly any furniture except a table where Jojo was sitting and banging on a computer and saying a lot of mothuhfuckahs and so on, and Malcolm saying, “This what you get when you a volunteer mon,” and Jojo saying, “Shut thee fuck up mothuhfuckah,” but I couldn’t tell whether he was joking or not.

My ears honed in on the word “volunteer,” and I wanted to ask Jojo if he was a volunteer like me, but this wasn’t the time to do it.  Although I would have had plenty of time, literally, because I was standing there naked while Jojo and Malcolm tried to get the computer to do whatever.  Jojo kept saying things like, “Why WOAN they give us somethin that fuckin WORKS?” and Malcolm kept coming back with things like, “Maybe it was somethin you said!” Then Jojo would call him a “bitch!” and claim he was “ALWAYS like that!”  So they were a couple of queens.  Pretty hot, though.  I didn’t mind watching them.

But anyway, I don’t know, it was maybe half an hour since I’d dripped my last drop on the floor until Malcolm put a tape measure around my neck and said “17 and a half.”

I knew what was coming.  I was about to be collared.

Malcolm handed him a collar—MY collar, size 17 and a half!—and Jojo stuck it into one of the machines that were lying on the table.  There was a buncha noises.  Then he took it out and held it up to the light.  “Whaddaya think?” he said.

“Clear and sharp,” Malcolm said.  “Hey newbie!  Know what we doin?  We puttin you number into you collar.”

“Nother words,” Malcolm said, “you gettin a thing in you collar to track you ass.  That OK with you, newbie?”

“Smartass!” he said.  A sign that we weren’t on the same wavelength.  In the background, Jojo was typing away.  Tap tap tap, usual plastic sound of computer keys.  Then a loud PING, and a computer voice croaking, “Activated.  Proceed with attachment.”

“Think you can memorize that?”

“Definitely!” I said, and I bent my head and I felt the thing going on.  Then he snapped it together, and that was it.  I’d finally been collared! 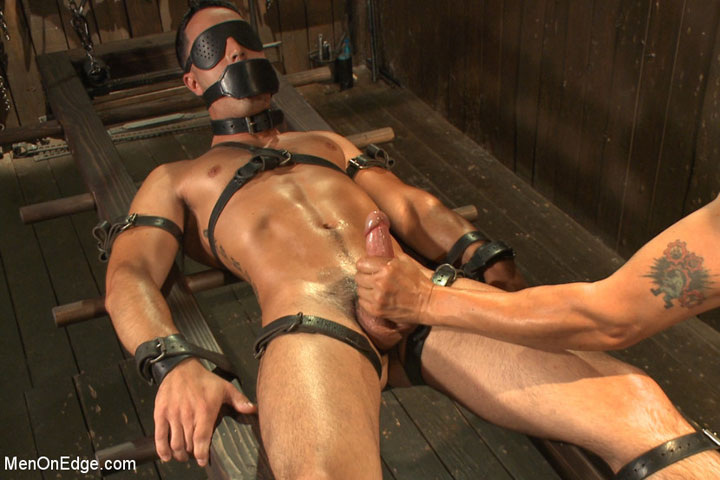