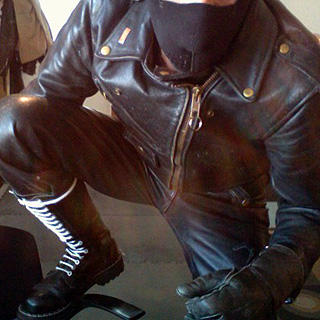 The light comes on, the cell door swings open, another day of hell begins after another miserable night in sweaty leathers with butt plug torment. A single skinhead steps in and says, “Fag prisoner #5, get your butt over the squat toilet and present your ass.” Jake crawls on hands and knees, chains rattling, over the dirt floor and waits by the pit. The skinhead unlocks and removes jakes’s muzzle and the crotch strap from the harness, unzips his butt access and proceeds with the enema.

Looking over at me says, “I haven’t forgotten you, fag, enjoy this.” He then presses a control on the remote box he carries, and my butt plug starts vibrating with a new intensity as my cock tries to respond in the painful constriction of my seed pod.

“Listen up both you faggots, my two mates and I have a plan to get you poor sorry leather fags out of this hell hole and us with you and stick it to that fucker overseer skin and some cowboys. We can get you your bikes, gas and all your personal IDs. Me and my two mates have also been trapped here for months with the same future you all have.

“Today, prisoners #1 and #2 have been sold and will be taken from the work chain gang by a couple of cowboys and led to a mine and rock quarry as permanent slave labour. Those two leather fags have been here more than two months and this is their last chance for freedom. That fucking ‘Sir’ who lured you here has already hooked a couple more leather fags as replacements. He is a sadist and hunts for any biker with a leather fetish and enjoys watching them suffer while laboring in the dirt locked in the gear they love, getting off at the sight as their sweaty grotty leathers wear out from the constant use.”

As he finishes with Jake, zips him up and re-attaches his crotch strap, he calls me over to the pit, removes my muzzle and my crotch strap with the attached butt plug and un-attaches it (to my relief) and proceeds with my enema.

“We three skins only have a key for the locks on your harness, lead chain and muzzle and we have to leave the locks hooking to your collars and harnesses closed or the overseer will notice, but today when we hook you to each other in a chain gang we won’t be closing those locks. When the time comes this will free up your movements when you are no longer attached to each other.

“The overseer has the key for your seed pods and posture collars also for your leg and wrist shackles and has a controller for shocking your cock and balls. Be ready for it. When we act, me and my two mates will go for the overseer, and you leather fags take on the two cowboys. When we have control of the keys we can restrain them in your chains. Wait for the overseer to remove the two prisoners’ chains and the seed pods so that my mates can remove their harnesses, collars and muzzles. As soon as you see us going for the overseer, take out the two cowboys.”

He then replaces our muzzles, gives us some water and leads us out of the cell to join the chain gang. All three of our controlling skins make a show of hooking our lead chains to each other and we head out. I am again harnessed to the work cart. It’s a slow trudge to the work site and when we arrive the two cowboys sitting their horses are waiting. The overseer orders the skinhead in control of prisoners #1 and #2 to free them from the chain gang and hand them over to the now dismounted cowboys. (These boys are hot wearing leather bat wing chaps tight ass levis, boots and spurs.) The overseer joins them and proceeds to remove the shackles and leg irons from the two prisoners, then the seed pods and finally their harnesses, posture collars and muzzles.

At this moment the three controller skins rush the overseer, pinning him to the ground while we six leathermen jump the cowboys. The controller skins are locking the overseer in the shackles and leg irons taken from prisoners #1 and #2 while one of them sits firmly on the overseer’s face the other two quickly take his keys and start removing all our chains. We then take the chains and lock the cowboys in them with arms behind their backs. We are then released from the fucking seed pods (our now free cocks and balls hanging out of our leathers), which permits us to remove the heavy harnesses. The posture collars are removed and locked onto the stunned cowboys and the thrashing-about overseer.

Two of our discarded harnesses are now being put on the cowboys by a leatherman and a skinhead laughing as they pull their cocks and balls out of their Levis, slip the harnesses cock ring firmly around them, pulling the straps tight while locking the harnesses on them. The struggling cowboys curse and protest as the seed pods are locked around their cocks and balls, and quickly silenced by a punch and muzzles tightly strapped and locked on them. The leathermen throw each cowboy belly down over the saddles of their horses, slapping their upended butts and one leatherman plays with a harness control box and jolts them with electric shocks to their seed pod confined balls.

A couple of the leather prisoners are helping a skinhead restrain the cursing overseer. Opening his fly, they pull out his cock and balls, and fitting the cocking on a harness tight around them they strap the harness on him, locking it, and then seal his cock and balls into one of the discarded seed pods. The skinhead overseer is muzzled and now strapped to the work cart.

We toss the remaining harnesses and discarded restraints on it, and head back to the blockhouse, constantly administering repeated shocks to encourage the overseer to keep moving. When we arrive at the blockhouse we drag the cowboys from their horses, shoving them in one of the cells and lock their lead chains to the wall. They are looking scared. The skinhead overseer is pushed in to join them and is also locked to the wall. It’s pretty tight and hot in the small 2-man cell, so we leave a harness control box outside the closed and locked door set to administer random continuous shocks until the batteries on their harnesses go dead to keep them entertained.

The three locked-up men can be heard moaning. Our three skinhead liberators lead us to the garage storing our cycles and an office where all our IDs and credit cards are found. On the way we captured three other cowboys, and we use the remaining harnesses and restraints on them, also locking them in one of the cells in the blockhouse.

There were several full 5-gallon gas cans in the garage. We filled up our bikes and we are ready to ride the hell out of this place. We are concerned that all our leathers have the word “PRISONER” painted on the back of our leathers and could attract unneeded attention from the Law, so we decide to wait until after dark. All six of us leathermen and the three skinheads get to know each other. Jake and myself have a mutual attraction to one of them and each other and he asks to ride with us. The other two skins also have partnered up with other leathermen. We talk out our plans, and we agree to ride to a rural property one of the leather men owns and hang out together as “THE 6 PRISONERS.”

The sun sets, and we leathermen ride out, the three skinheads who freed us join riding pillion. One rides with me, to share a future with Jake and myself.

Metal would like to thank rts for this story! 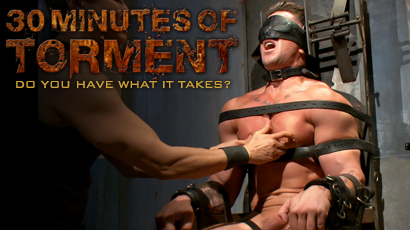