Note: This is the final chapter of a multi-part story by lthr_jock. To start at the very beginning, click for Part 1.

Despite Mike’s experience in sleeping in bondage, it took him a while to get to sleep as he was still nervous about what Barry might do. But in the end he dropped off to come sharply awake as an alarm clock blared out in his ear. As he blinked awake, a muscular arm reached over him and turned the alarm off. The arm then draped across Mike’s torso before idly flicking his nipples. “Morning, Mikey. Time to get up. I’ll let you go once I’ve showered.”

Uncaring that he was naked, Barry got up and walked into the adjacent bathroom. Mike could hear the sound of water running as he struggled against the restraints. He looked at the alarm clock – 05:10 – there was still enough time for him to get to work. Barry seemed to be in the shower for ages before appearing in the doorway with a towel wrapped around his waist. He then took his time undoing, Mike, leaving the hands and gag for last. “Look I’m sorry, but I have to go to work.” Barry nodded “I understand, Mikey. But one question – did you enjoy yourself?” Mike nodded. “Good. Then I’ll be seeing you again?” Mike paused as he headed for the door. “Yes. Not sure when though.” He looked at the clock again. “Sorry, but I really have to go.” Barry laughed and waved Mike out of the room.

Mike sat in his car and looked at the time. He would just be able to get to work, but didn’t have enough time to go home first – so would have to go to work in his leathers. “Dammit!” He slammed his hands against the steering wheel and as he did so the padlock on his collar bounced off his chest. It reminded him that Frank could help, so he quickly texted him. Seconds later he got a response with a tag for a street close to the station. “Understood. Meet me here.”

Mike drove as fast as he dared to the address and sat there nervously waiting for Frank to arrive. Quietly he cursed not putting a change of clothes in the boot of his car. With just under 15 minutes to go before the start of the shift, Frank pulled up beside Mike’s car and would down the window. “Morning, Mikey. Wow the guys are going to love you in your leather gear. Great collar too.” Mike rolled his eyes. “ Come on, Frank, help me out here.” Frank stopped grinning and glared at Mike. “I mean, please can you help me out Sir?” Frank smiled again and nodded. He pulled a duffel bag off the passenger seat and tossed it into the road. “Clothes and the key in there. See you at work.”

Mike nipped out of his car and grabbed the bag. He looked around and found a sheltered spot to change in. As he took the clothes out, he sighed – Frank had still found the time to indulge his sense of humour. As a result, when Mike arrived at work he walked into the locker room in a lime green skintight Underarmour tanktop and a pair of black compression shorts, under which was an electric blue speedo. As he had no other underwear with him, he had to wear the speedo all day. Luckily it was so late on that Frank was the only other person in the locker room. He was clearly enjoying it – even when Mike handed back the chain collar and padlock with a whispered “Thank you, Sir.”

The next couple of weeks were back to the normal routine. Mike visited Gordon twice and went to the gym regularly. As he looked at himself he could see that he was bigger. More than that, he was now less worried about being on view, so he was wearing tighter clothes – and less of them.   He’d spoken to Barry several times, though they hadn’t met again. They generally texted or Skyped most evenings – and on most occasions he was in some form of bondage while they spoke. Mike hadn’t heard from Jan at all.

Then he received a mysterious email from Gordon telling him to expect a package. Sure enough, that evening a courier delivered a small package which when he opened it had a DVD inside. There was no indication who it was from or what was on the DVD. He slid it into his PC and waited. It booted up and with no intro showed a football goal with a single figure stood in the middle of it. The figure was stood with arms and legs spread wide and as the camera approached the goal, Mike could see that the person was chained in that position. He could also see that they were naked. The camera zoomed in on their face – it was Jan. He had been gagged with a hefty ball gag and was clearly yelling into it. The camera panned out again.

Then from somewhere behind the camera a football was kicked towards the goal. It sailed past Jan and into the net. Mike could hear Jan yelling into the gag as a second ball flew past, this one catching Jan a glancing blow on the side, despite his attempts to twist away from it. One ball after another got booted at Jan, some missing but others hitting him with painful thwacks and leaving his body spattered with mud. One particularly accurate shot bounced the ball off his head and as he shook his head to clear it, the next one hit him full force in the groin. Jan crumpled, his legs giving way and hung there supported by the chains holding him in place. The camera turned to reveal Barry and Frank both wearing football strip and grinning at the camera. “Hope that makes you feel better, Mikey.” The two men laughed and the DVD ended.

Mike sat back in his chair. To his surprise that did make him feel better – and so he watched it again.

“Will you just shut up, you look fine.”

Mike sighed and turned back to the mirror. Several weeks had passed and his time in the gym had definitely bulked him up. Which was good as his current clothing left nothing to the imagination. He was wearing a skintight pair of rubber jeans – mostly hidden because of the rubber chaps he was wearing over them, secured at the waist with a thick rubber belt and a huge silver belt buckle. On his feet were black cowboy boots that had been glossed to a mirror shine – it had taken him an hour earlier. His shirt was a long-sleeved cowboy shirt – in rubber and open at the neck where it was joined by a rubber bandana. He had on an open rubber waistcoat and gauntlets. His ensemble was finished with a rubber cowboy hat that had somehow been strengthened to keep its’ shape.

He turned back to Barry who was dressed identically. “I look like an idiot.” “Shut up and put your gun belt on.” Mike strapped the black rubber gun belt around his waist, the usual holster replaced with a handcuff holder. “See, doesn’t that make it better?”

Mike sighed – he clearly wasn’t going to win this one. Barry moved up to stand beside him – two rubber cowboys stared back at them. “Besides, Gordon told you to wear it, didn’t he?” Mike nodded. “Ok then, time to go.”

The two men headed outside to wear Barry’s car was parked. They drove across town, with Mike unconcerned that people might see how he was dressed. They pulled up outside the Eagle and without hesitation, Mike walked through the front door to join the packed crowd for the Cowboy Party. Mike started looking around and soon saw Gordon. He was stood at the end of the bar dressed in a similar way to Mike – except that his costume was in black leather and he had several hanks of rope hanging from his belt. “Mikey, looking good.” Mike blushed and nodded awkwardly. He then felt a hand on his arse and turned to see Frank “Evening, Mikey.”   Frank was dressed identically to Gordon and the four of them were clearly getting some attention from other people in the room.

They had a few beers and made polite conversation until Gordon turned to Frank and said “Ready?” Frank nodded and led Barry over to a small stage. Mike watched until Gordon pushed him from behind and he walked through the crowd until he was stood by Barry. Gordon and Frank took the rope off their belts and as they did spotlights illuminated the stage. Both tops worked in unison, clearly having worked out in advance what they were going to do.

Firstly Gordon pushed a ball gag into Mike’s mouth and secured it behind his head. He then pulled up the rubber bandana to cover it. Turning Mike so that his back was to the audience, he used rope to tie his hands behind his back and then created a complex rope harness over Mike’s chest and stomach ensuring that he could not move his hands or arms. As he was turned back to face the audience, they could clearly see the bulge in his rubber crotch. Mike looked across at Barry to see that he was being secured in the same way. At a command from Gordon, Mike knelt down and then Gordon helped him to lie on his side. Loops of rope went around his ankles, above and below his knees and his thighs. Gordon then created another rope harness around his waist and crotch that served to accentuate his bulge. Finally he pulled Mike’s ankles up towards his arse and secured them there in a hogtie.

Mike and Barry were now side by side, rubbered, sweating and hogtied. They were laid so that they faced each other and their flies were undone and their cocks pulled out. A 1 ft length of chain was produced with a ball strap at each end and was secured so that the two hogtied men were connected and each movement by one pulled on the balls of the other. Both men started moaning as they pulled against each other, their cocks rising until they touched. Gordon stood up to face the crowd. “There you go folks. The first one to cum has to serve the other one for a month.”

And so he lay there, rubbered, restrained and grunting. His cock was in full view of the people in the bar and although his face was partially obscured, anyone could have recognised him when he walked into the bar. Even now, photos of his exploits could be being sent to his Inspector. But Mike finally realised he didn’t care. To feel this good, it was worth the risk.

NOTE: To read the next story by lthr_jock, click for The Bet

…and if you still want more like this,  be sure to read these other stories by lthr_jock:

Picture below is from Maskurbate 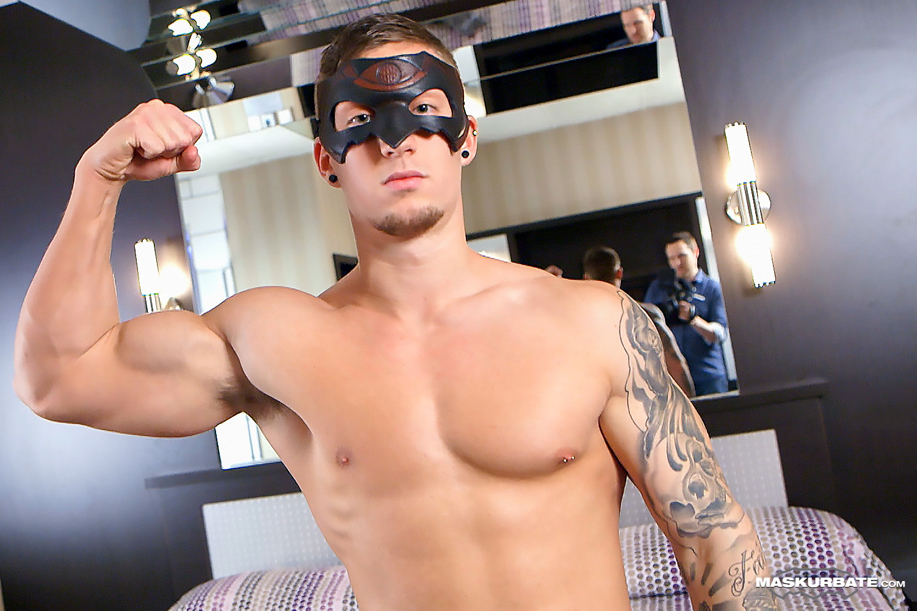