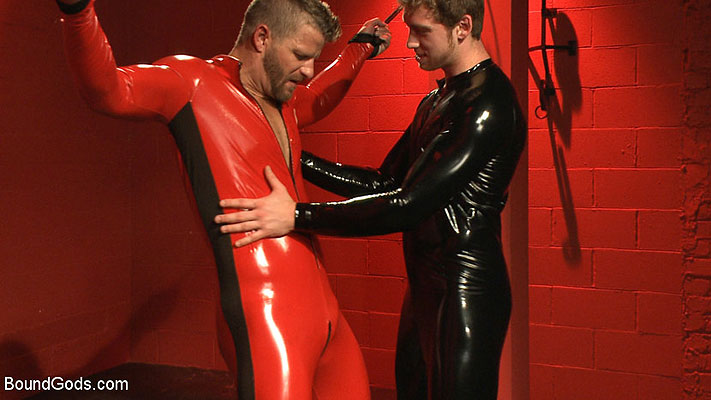 Connor Maguire of the Onyx tribe infiltrates a Redz lair, tormenting and fucking one of their members, Jeremy Stevens While the bondage-loving Redz tribe are away, Jeremy Stevens is left behind to watch over their lair. Late one night he brings a hot stud, Connor Maguire, to the lair for some fun. Jeremy begins tying up Connor’s muscular body as he sucks Connor’s rock hard cock. When Jeremy unties Connor, he soon realizes his mistake as Connor pounces on him, revealing his Onyx identity. Connor tears away Jeremy’s Redz uniform and edges the Redz member over and over. Jeremy’s bent over to swallow Connor’s cock before taking a rough fucking from the Onyx member. After he’s beaten with the flogger, the Redz member finds himself bound on the ground, with his balls trapped in an electrical device. Once Connor shoves an electrical butt plug up Jeremy’s ass, he begins tormenting his balls and his prostate with shocks of electricity. After one last fuck, Connor milks a load out of Jeremy’s cock before spraying his own hot cum all over the Redz face. To see a free video preview of this shoot, click here.

You can purchase SlickItUp gear by clicking here.

Click for Slick It Up — and be sure to check David’s awesome blog, House of Vader Hey guys, if you are looking for something exciting to give your kinky boyfriend for Christmas, check out Slickitup. They have lots of hoods, full body suits — and plenty of jeans and other fetish apparel. Whenever I have ordered anything from Slickitup, I have received a personal note from the designer and owner of this company, Dave, who is pictured showing off the big guns.

Thanks for keeping it hot, Dave!