Andy woke up in his cell when the lights turned on.  He just assumed that it was morning as there was no window in his cell.  He got up and stood facing the back wall of the cell with his toes and nose touching the wall as he waited for Murray, his personal guard and abuser.

The cell door slammed open and Murray strolled in.  He unlocked the heavy leather control collar from Andy’s neck and dragged him from the cell.  The collar would have given Andy a severe debilitating shock if he had passed through the door of the cell while it was still on.  Murray walked him out of the cell and down the hallway.  Andy realized that they were heading for the punishment room.

Soon Andy was stripped and buckled to the heavy wooden cross.  Murray had discovered that he enjoyed inflicting severe pain on his personal target of abuse.  Andy waited on the cross listening to Murray walking around the room.

The thud of the dehners aroused Andy.  Despite his hatred for Murray, he was turned on by him especially when as he was today in his full state trooper uniform.  He picked up a bull whip and uncoiled it.  He began cracking the whip, warming up his arm.  He moved behind his bound squirming target and began whipping Andy’s back and ass.  Andy arched his back as the first strike of the whip occurred.

By the time he had received 9 strokes he was screaming and begging for the whipping to stop.  He could feel blood dripping down his back and his back felt like it was on fire from the pain.  Andy passed out and his body slumped down being held up by the heavy leather cuffs padlocked around his wrists.  Murray smiled and re-coiled the whip and hung it on the rack.  He went over to the closet and grabbed a bucket and filled it with cold water.  He walked over and tossed the cold water on Andy to bring him around.

Andy came to and struggled to stand up and take the pressure off of his shoulders.  He slumped against the cross and wondered what was going to happen next.  Murray walked over and unbuckled him from the cross and dragged him back out of the room and tossed him back into his cell.  Before leaving the cell, Murray made sure that the heavy control collar was back on and buckled and locked tightly around Andy’s neck.  He looked down at Andy and sneered telling him that he would be back later as he had to go arrest a couple of new prisoners that were arriving soon.

Andy groaned and staggered to his feet and then sat down and slumped onto his bunk.  He crawled onto the bunk and laid on his stomach as he knew he would not be able to take the pain if he tried laying on his back.  He lay trembling as his body worked through the endorphins that had been released during the whipping.  He knew that it would just happen again as Murray had a very violent nature.

After recovering, he sat up on the bunk and looked out through the open door of the cell.  He knew the door was alway left open during the day to tease and torment him as he would not try to leave the cell.

He heard the clanking of chains dragging on the floor of the jail.  He stood and moved as close as he could to the door and watched as the latest group of prisoners shuffled by all wearing their orange prison uniforms and transport chains.  The guards surrounded them in their full black swat gear.  The prisoners were a little stunned due to the reality of their situation.  They had signed up for a prisoner experience but once they were arrested and processed, the reality of their situation hit home as the guards did not hold back and physical abuse was used indiscriminately to keep the prisoners under control.

For a few days, Murray left Andy alone as he had a new group of men to abuse and beat.  He would swagger by Andy’s cell and check to make sure Andy saw him and flinched thinking he was going to be beaten.

The routine had become tedious but Andy could do nothing about it as he was effectively locked in a cell under the total control of Murray.

A few days after the last batch of prisoners had left the jail, Andy was laying on his bunk sleeping out of sheer boredom.  The long days of being locked in the cell was taking a toll on his mind and body.  A loud bang came from the front of the building and the building shook.  Andy sat up on his bunk but the cell was pitch black.  He knew his way around the small cell but he sat on the bunk wondering what was going on.  Suddenly, gunfire sounded through the building.  Andy stayed on the bunk wondering what was happening.

After a while, the lights came on in his cell and the door clanged open.  A couple of men in olive green battle gear entered and one of them asked if he was Andy.  Andy nodded and they radioed that they had found him.  They told him to come with them but Andy refused to move.  He though it was a trick to try and get him to break his rules so Murray could punish him.  Andy moved back away from the men and told them he was not going anywhere as they were trying to trick him.

They radioed and told someone to bring him back to the cells.  Andy heard some men coming through the cell block, their boots thudding on the concrete floor.  Andy stood at the back of his cell feeling very nervous as he still did not know what was going on.  Two more men walked into the cell and Andy recognized one of them.  His former master stood there in jeans, boots, a tee shirt and cuffed.  It was a shock to see the man who betrayed him to his former colleagues and had effectively sentenced him to a living hell as the play toy of Murray.

His master looked at Andy and told him that he was sorry about what he had done.  He explained that after leaving Andy in the custody of his former colleagues he began to feel guilty.  He finally went to the FBI and turned himself in as an accomplice to kidnapping.  He went on to tell Andy that he had taken a plea bargain in exchange for all the information he could provide about the private prison and the owners.

Over the last few weeks the FBI had gathered intelligence and made the plans to raid the facility.

Andy nodded and still refused to move from the back of the cell.  One of the FBI agents moved forward and grabbed Andy by the bicep.  Andy tore himself loose and still refused to move.  Finally, the FBI agent who had grabbed him asked what he was afraid of.  Andy told him that the heavy leather collar prevented him from leaving the cell as it would shock him till he collapsed.  The agent nodded and examined the collar.  He saw the padlock on the buckle and asked who had the key.  Andy told him that Murray was the only one he knew that had a key.  The agent called on the radio for Murray to be brought to the cell.

After a few minutes, Murray entered the cell with his escort.  His arms were cuffed behind his back, his usual immaculate trooper uniform and boots were stained and dirty.  He snarled at Andy and told him that he was not going to get loose.  The lead agent removed the heavy ring of keys from Murray’s duty belt and sorted through the keys and tried several until he found the right key and unlocked the collar.

Andy freed from the collar, relaxed and walked out of the cell along with the lead agent.  They walked out to the intake area and the rest of the prison guards and the Commander were there all in cuffs.  The lead agent looked at them and told them that they were all under arrest and being charged with kidnapping and forcible confinement.  The men looked at each other and then they were moved out and taken to the local jail for processing.

Andy’s former Master looked over at Andy and told him that he was sorry for betraying him.  He was taken along with the others.  The agent looked at Andy and told him that he was going to be taken to the hospital to be checked over and then he was free to go home.  Andy looked startled and asked if he still had a home.  The agents nodded and told Andy that his Master had turned over everything to the FBI including the keys to Andy’s house.  Andy nodded and felt nothing as things had happened so fast.  He numbly let himself be led out and taken to the hospital.

After Andy was released from the hospital, he was taken home and allowed to rest prior to the trial starting.  During the preliminary hearings, he got a message from his former Master.  Andy was surprised but agreed to see him.  His Master had been released on bail pending the final approval of his plea deal.  If the deal went through, he would be put on probation but no jail time.

Andy walked into the meeting and his former Master stood up and looked very sheepish and apologized again.  Andy nodded and asked him why he had turned Andy in and let them make him a permanent prisoner.  He hung his head and said that he thought that Andy wanted that as he had talked about becoming a prisoner.  Andy nodded and looked at his former Master and said that he had thought about it but the reality was totally different.

Andy looked up and told his former Master that he had changed as a result of his time in the cell.  His Master nodded and stood there.  Andy told him that he was going to forgive him but there was a condition.  He had to earn his forgiveness by becoming Andy’s boy and learn what it means to serve and belong to a Sir.  His former Master nodded and then dropped to his knees and lowered his head.  He begged for forgiveness and the opportunity to learn and pay for his crime.  Andy nodded and told his new boy that they had a journey to go on and that they would travel the path together.  Andy then turned and left as his new boy had to meet with his lawyer and then go to court.

Metal would like to thank the author, Rubrpig, for writing this story! 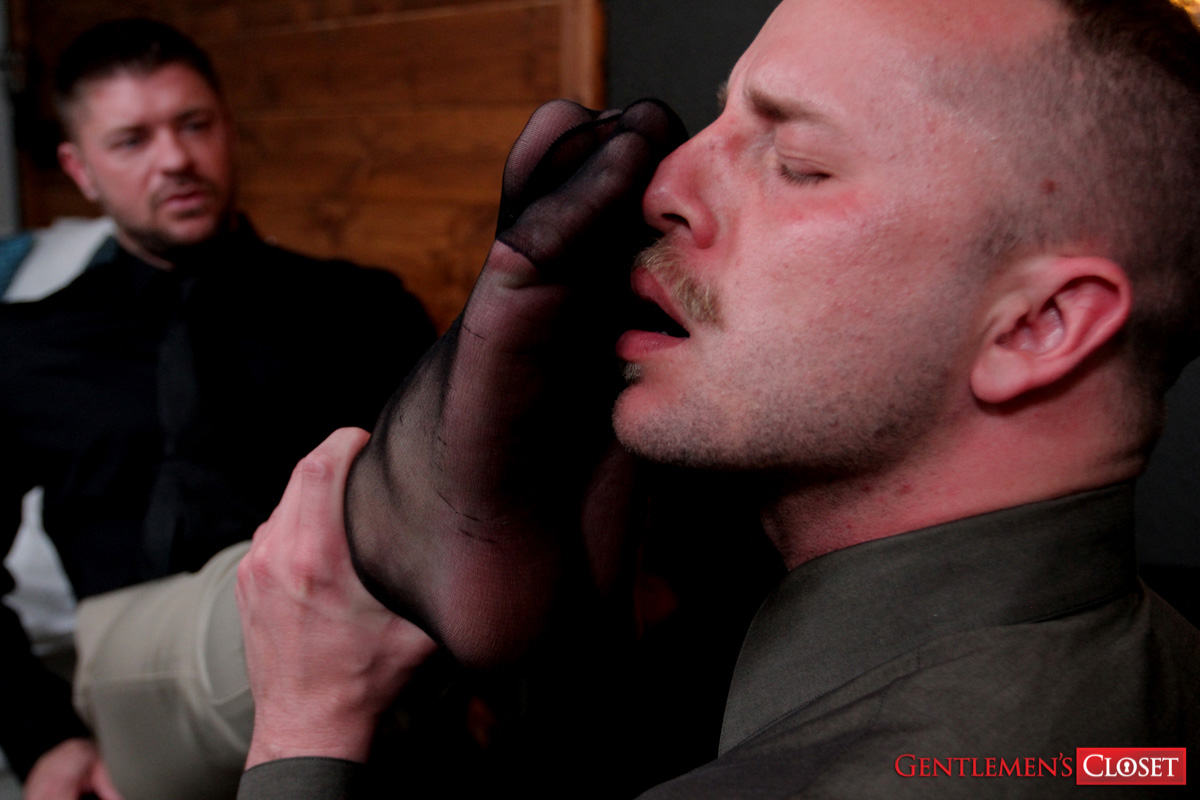