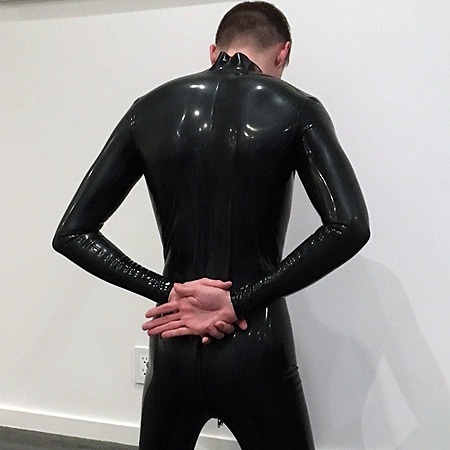 The hunt is on. Gimp is curious who will win…Will it be Master Mike? Master Robert? Or maybe Master John and Master Alex? Or Master Gary? The gimp’s mind darts between each of the men it serves as it ducks between the crowds at the convention. While the gimp desires each Master for their different techniques, it doesn’t want to make it easy for them. The chase can be fun. Gimp’s mind flashed to a few weeks ago.

It was Master Alex’s idea. Let the gimp loose in a large public event, and see which of the Masters can “bag” the gimp. The winner gets to claim the gimp as His full time property, though it is still devoted to the group. Gimp loved the idea. It was high time it moved in with one of the Masters full time and took its training to the next level.

Gimp had spent the last four years while in college training with the group; five Masters who all knew each other and wanted a devoted rubber sub to train and share. Since gimp graduated recently and was without too many attachments, it would be easy for it to move in with a Master. But it was Master Alex who suggested the hunt idea to keep it fair.

Here it was, locked in chastity, sealed in rubber, then covered in a full Spider-Man suit, and set loose at the SD Comic Con. While all these other people were going around, sharing their hobbies and interests, the occasional guy showing off their body in a full Lycra cosplay suit, gimp was darting around the crowd while five Masters hunted it, each wanting gimp to live under Their roof for a year to mold to their liking. At least until the next SD comic con, when the hunt would happen again.

Once in the corner, it glanced around. From this spot, it noticed Master Gary a few booths over. Gimp moved slowly next to another group of guys in Spider-Man suits, trying to blend in. Gimp knew there was some identifying feature on the suit so the group could find it, but gimp was never made aware of what or where the feature was. It would just have to try to hide in plain sight.

Master Gary looked around, but couldn’t see gimp, and moved on. Gimp was a little relieved. Master Gary was the “Master of pain” in the group. While each Master helped push gimp, Master Gary’s sessions tended to be the most difficult. Granted, one of the reasons for that was Master Gary also oversaw the majority of gimp’s punishment sessions. Nothing enjoyable about those, though. Master Gary has always made an effort to remind gimp about how far it has come with its pain tolerances. Due to His training, gimp always got hard now (as much as chastity would allow) when the whip made an appearance. Gimp always enjoyed CBT, thanks to Master Robert, but took it a long time before it could enjoy the pain from impact play. Due to his powerful frame and evil instruments, Master Gary was the Master gimp was most nervous about being captured by. With that in mind, gimp decided to move away from the corner and towards the center of the room.

As gimp slowly made its way through the crowds, focused on putting distance between itself and Master Gary, it felt as if it was being watched. Gimp stoped and looked around. Sure enough, Master Mike had spotted gimp, and was heading straight for it! Gimp took off at a quick walk, same as Master Mike; neither wanted to call too much attention to each other. But gimp was a little worried, it wasn’t sure how to loose Master Mike.

Master Mike was the first Master of the group that gimp met. It started when gimp was a freshman in college and started spending a lot of time around the gym building when the wrestlers started training for their upcoming season. While gimp wasn’t much of a jock, gimp enjoyed “studying” near the gym, back resting against a tree, watching the wrestlers come and go from practice. While gimp thought it was being discrete, the Coach of the wrestling team quickly noticed this near daily occurrence from his office window. And that coach was Master Mike. Their dynamic started from a quick introduction, and then a tour of the gym a few days later.

Then, once Master Mike saw how nervous gimp was around Him and got a good sense of gimp, He offered to help do strength training with gimp. How could gimp say no to this sexy coach? One thing led to another, clothes became tighter, coach became more demanding and controlling, gimp became more comfortable in following orders, subtle touches here and there, more time spent in and out of the gym, gimps eyes showing nothing but worship, and eventually once Master Mike knew gimp was addicted to Him, He made His move. He offered the gimp the role of being a sub, deepening the training from body, to mind and sex. Master was right, gimp couldn’t say no. Master Mike knew that with time, training, and some force, gimp would be just as addicted to uniforms and gear He was. And the day gimp was given its own wrestling uniform was the day gimp was introduced to the group.

“Gotcha!” gimp heard as it felt a hand close around its wrist. It was foolish to think it could outrun a coach. A quick wrestling move, and gimp was forced to its knees, held by Master Mike. For a quick second, its future with Master Mike passed in gimps mind: sports gear, athletic training, and coach/jock role play constantly. And while gimps locked dick leaked at the idea of being forced to wear compression gear in public for the next year, it remembered the wrestling training Master Mike gave it, and it twisted its body….Master Mike’s grip slipped due to the Lycra and rubber layers, and gimp darted away into another group of spider men taking photos. “Fuck”, it heard as it sped away.

At this point, gimp was starting to sweat under the rubber. The warmth building in the room, mixed with the quick physical scuffle, was getting to gimp a bit. Gimp slinked away to a shaded corner of the center to gather itself. After a few mins and it felt cooler, gimp stepped out again into the room. This time, gimp went slower, taking its time to move through the booths, and stealing the occasional glance at the sexy guys dressed in similar suits. After thirty mins, gimp was getting a little nervous; all that time moving about and gimp hadn’t seen any of the Masters. Then a few booths to gimps left, Master John appeared again, followed quickly by His husband, Master Alex. Damn they looked good while their eyes scanned the room.

Master John and Master Alex were leathermen. They lived and breathed it. Even here at the convention they were wearing boots, leather pants, Fred perry polos, and leather suspenders. Gimp knew they must be very warm, as they are rarely seen without one of their many leather jackets on. And gimp knew how many. Gimp knew exactly how many leather caps they had, and how many boots, pants, jackets, and shirts they had, since gimp was responsible for keeping them cleaned, oiled and conditioned. In addition to being flown to SF for a full bluf uniform to be made for it, gimp was also measured for a full leather bondage gimp suit and learned the proper boot care routine from a well known bootblack.

Both Masters had taken great care to teach gimp how to serve leathermen, in and out of the playroom. Gimp learned how to cook and clean based to their liking (which the other Masters took advantage of as well), and how to trim cigars and serve as an ash tray and foot stool. Gimp also learned proper slave etiquette under their watch: how to greet its Masters, how to keep its body groomed and clean, how to speak and proper posture. And when gimp served well, it would be rewarded with the ability to cum while humping one of their boots, then quickly clean up the mess, all under supervision.

And then, three booths to gimp’s right, Master Robert appeared. And that’s when gimp made its choice. Was it cheating? Yes! But what’s wrong with tipping the scales a bit?

Master Robert was a rubber and bondage Master. He was the one who insisted on the catsuit under the Spider-Man suit. He was also the Master who challenged gimp the most. He was an expert in long term bondage and gear. He assisted the other Masters with their bondage skills, as Master Robert felt bondage and captivity helped a sub feel free, and gimp agreed completely. During the longer weekend training sessions with Master Robert, gimp thought it could sense there was more Master Robert wanted to subject gimp to. Master Robert used bondage, isolation, and control to push gimps mind.

While gimp loved serving the other Masters, the real reward and freedom was found in Master Robert’s playroom, suspended by chains, sealed in rubber, being fed piss while the electro box fried its cock and balls. Or strapped tightly to the wall, facing a mirror, watching a timer count down until Master would come back to use it. Or seeing the fire in Master Robert’s eyes while He talked to gimp about how much He would be turned on watching gimp be pierced, or marked. Gimp was craving some of Master Robert’s horrific cock and ball torture at this exact moment. And that motivated gimp’s next decision. And even though gimp knew it would be punished, gimp tipped the scales.

Gimp ducked backward, took a right, and “tripped” right into Master Robert. And sure enough, as gimp tried to get up, prepared to act like it was going to take off again, it felt a yank around its neck, a click of a padlock, and a quiet whisper in its ear: “hope you like that catsuit gimp, it won’t be coming off until we fit you with that PA.”

And gimp leaned back into Master Robert, its mind and heart racing with excitement and fear. This next year would be interesting.

Metal would like to thank the author, boyryan54, for this story. If you like be sure to leave a comment in the form below. You can find boyryan54 on Recon. 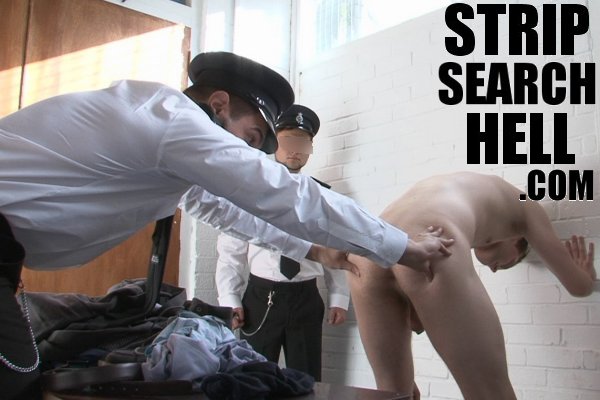 6 thoughts on “The Hunting of Spider-gimp”