We were halfway to the truck when Daz stopped. “Hang on, just remembered,” he said and, taking my keys, went back into the house. He came out a couple of minutes later with a smile on his face. “Almost forget the tit clamps, might as well give him full use of my stuff while I’m here.”

“Of course, he’s fit and healthy with all that ‘love and attention’ you been giving him.” He said that with a sarcastic voice but I knew what he meant. “Not going anywhere either. No, Chris my friend, he simply needs to know that his position isn’t going to alter just because you’re not some kind of heartless sadist but actually a regular guy, who happens to also like a bit of kinky s&m play and is his Master as well. He’s bloody lucky to have been bought by you and not me.” He grinned even wider and I chuckled at that. “Now, let’s get some in.”

After some beers and chasers for Daz and a couple of beers for me, as I was aware I was driving, we returned to my place a couple of hours later.

“You sure you’re ok with what we just discussed?” Daz asked me getting out of the truck. “I don’t want you to start telling me to hold off once we start, especially as you’ve already told him he’s mine as long as I’m here.” I had thought about it on the drive back and was not altogether sure but nodded anyway. “Yep, I’ve been far too soft on him. Houseboy is one thing, but he’s a slave and I can see how things will pan out if he’s not reminded of his place regularly.”

Daz thumped me on the arm and laughed. “And when I’ve had some fun with your prize possession this evening, perhaps you and I can have some more in that double bed you’ve got upstairs. I’ve got enough rope and leather items to keep us occupied while matey in the dungeon contemplates his life.”

I felt my cock rubbing against my jeans as we walked up to my front door. I was always semi hard whenever I was with Daz anyway, that was a given, but with all that was going on I forgot we were soon to be sharing some old pleasures again. I tried to push the lump in the denim down a bit, but Daz caught sight of it and simply grabbed me by the shoulders and covered my mouth with his in a long deep tongue-twisting snog. No use trying to push my cock down where it was less obvious now. I could feel the precum oozing around my crotch.

I followed him inside, down the stairs and into the cellar room. I leant against the door and watched as Daz stomped over to the bent figure. Zero was sweating and making one or two attempts at struggling to ease one pain only to make another worse. Daz grabbed his hair again and pulled his now red blotchy face up.

“See this?” he said pushing his crotch into the slave’s face, “this is a hard cock straining under these leather pants. And do you know why it’s straining? It’s because I’m looking at you, in your painful position, your sweat dripping off your nose, your arms pinioned up as far as they can go without being dislocated and your ass waiting for me to attend to it. And you’re thinking, ‘what have I done to be treated like this by that sadistic cunt, and why doesn’t my Master help me?’ Well there’s a very simple answer. It’s because I AM a sadistic cunt and you’re a slave who thinks they’re a house guest and who needs to be shown exactly how slaves will be treated when and if their Masters think it’s due. And it’s due, oh yes it’s due.”

Daz turned to me and grinned again. He held on to Zero’s head and pointed over to me with his other arm. “You see, your Master is as hard as I am and going to watch every second of your beating. It’s not a punishment beating, you’ve done nothing wrong, it’s simply because we can, because we enjoy it and after we’ve finished and you’re left here hanging by your tired, sore, aching arms we’ll be fucking each other because we can, because we really enjoy it. But first things first, let’s get this gag in nice and tight, we don’t want you biting that tongue of yours do we, and I like to keep the noise down a bit if possible.”

Daz held a solid pecker gag up to the slave’s face. “Open wide,” he said with a chuckle. He forced the gag in as far as it would go and buckled it tightly behind Zero’s head. “Nice one. Now, let’s see. Yep, here it is.” He walked back from the bench, slapping his palm with a heavy rubber paddle. It was about three eighths of an inch thick with steel studs on one side. He waved it under the slave’s nose. “I didn’t know if you’d experienced one of these, maybe when you were training perhaps, but not since you came here so I thought you’d like to be acquainted.”

I coughed and Daz looked at me. He walked over and stood close to me. “You will be careful,” I whispered.

“For fuck’s sake, Chris, I do know what I’m doing. Half of this is to scare the little shit into believing either of us is capable of hurting him more than he ever imagined. We, or rather you, need him to respect that and remember it. Of course it’ll hurt him, but he’s had worse in training. Have you seen what they do to them in those places? All that will happen is that he’ll be sore for a few days and be so happy to have you for a Master he won’t put a foot wrong. If he does then just give me a call if you don’t want to handle it yourself.” He kissed me again, holding me by both arms and pulling me in tight to him so that we both felt our cocks rub against each other.

“Wait. Wait, wait, wait,” Daz suddenly said. Walking back to the bag, he pulled out a leather arm binder. “Should have thought of this earlier,” he said, letting the winch lower the slave’s arms. “Kneel,” was the command and Zero knelt. “Hold his shoulders and lower him as the winch slackens off, Chris, I want him flat on his stomach. Now you kneel with his head between your knees.”

I wasn’t sure exactly what was going on, but I made sure that the best part of my wet crotch was hard up against Zero’s face. Daz gave me a short leather strap. “Tight as you can above the elbows, push his arms together as much as you can while I manage this end.”

A couple of minutes later and Zero’s wrists were free of the restraints but his hands were now duct taped together with the fingers pointing out straight. Once covered they looked a bit like the tip of a spear. Then Daz started to thread the leather binder up the slave’s arms. It was ok until he got to the elbows but then the leather had to be widened a bit more until Daz was able to finally get both arms in and touching the strap I was still holding. He laced it carefully and ended by adding a strap around the wrists and another above the elbow. His sweaty face looked over to me and smiled.

“Good job mate, that’ll hold him still more than wrist restraints would and I do like my slaves to be as still as possible when I’m beating them.”

He activated the winch once more and Zero unfolded into a Z shape then began to stand. Higher and higher went his wrists, pulling his arms up until he was once more bent forward.

“One last detail,” and Daz velcroed each end of a spreader bar to Zero’s ankles, fixing a padlock to the centre ring and the eye bolt I had fixed to the floor. “Now we can start.”

I was, by this time, as horny as I think I’d ever been. I could feel the precum oozing down my right leg and I so wanted to grab the slave’s head and thrust my cock into his mouth. But I had to wait. I needed Daz to do this. I pulled an old wooden chair over from the side of the cellar and sat down right in front of my slave’s face where it was bent over, our heads at the same level. We looked straight into each other’s eyes, mine excited and wide, his showing both fear and trepidation. I turned slightly to see Daz several paces behind his bent over ass looking like a championship tennis player about to return service.

Holding Zero’s face between my hands I simply said, “I want this to happen. You may not think it, but it will help your life here no end. After each time you feel that paddle you say ‘Thank you Sirs.’ I want to hear every word, every time. Fuck the gag, get used to it. Miss one. and it’s repeated.”

I gave Daz a thumbs up and waited. I counted about 25 before Daz moved. The sound of the paddle slapping the flesh of the slave’s ass resounded round the concrete room followed by a sort of high-pitched wail and heavy intake of breath. So far so good, but no words. Thumbs down. Daz took a second swing, and by the sound of it made it harder than the first. The whine grew to a howl and Zero’s face crumpled as he bore the pain. I grabbed his face again and looked straight into his eyes. He opened them, took a couple of seconds then managed to gurgle “Fffthnng uutheuurs.”

I accepted that. Another hard one had him bouncing forward as far as the restraints would let him, the whining howl again turning into a desperate need for breath. Misshapen words escaped the gag. Daz waited now. I didn’t know how many he thought was enough, but it obviously wasn’t yet. Suddenly he pounced forward and shot three hard whacks in quick succession. The slave went wild, almost dislocating his shoulders. “Christ that must have hurt,” I heard myself saying. He was now a mess of snot, sweat, tears and drool.

“Enough!” shouted Daz. That’s your ass finished with, almost. He picked up an aerosol canister and sprayed the bright red flesh. Zero screamed blue murder at that, a high-pitched continuous scream that went on between gulps of air. “Just to be on the safe side,” said Daz. “Antiseptic.”

He lowered the slave to the ground. Where he lay in a disorderly heap still sobbing and moaning, slowly trying to touch his ass cheeks with the arm binder. “One down, two to go,” Daz looked at me as he said it.

“Yep, ass, back and chest, the perfect set. Time for a cup of something?” He pushed the toe of his boot into the slave’s side. “You got a rest period, slave. See you in a few minutes. Don’t go away.”

He followed me up the stairs, turning off the light and slamming the cellar door.

Zero mentally wrapped the darkness round him as if it was a fur rug in a winter forest. 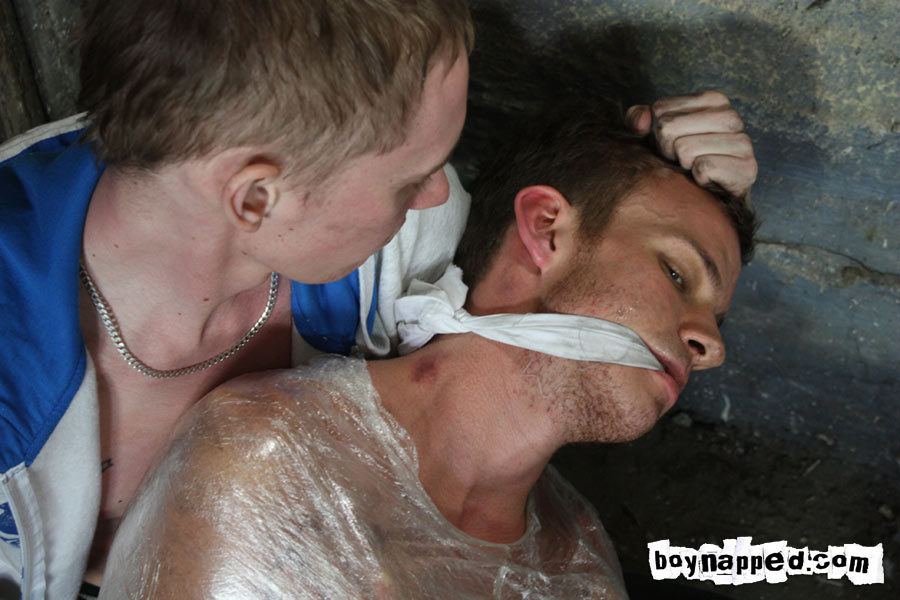