Before he could see them, Dylan smelled the stink of spilled beer and the sound of frat-boy stadium rock. As Colton turned a corner he heard shouts and cheers, and when Colton jerked Dylan’s leash and pulled him into view, the cheers became twice as loud. The Reds were having a blast.

The party was an obscene display of… stuff. Multiple boxes of uneaten pizza, bags of hamburgers and French Fries, and coolers full of beer bottles. Huge TVs hooked up to satellite boxes played some sporting event, though Dylan dared not look at it. Other TVs were hooked up to Xboxes.

But the Reds owned another type of “stuff” now, too. In the center of the room, a naked man was crawling on all fours. Costume dog ears were strapped to his head. Out of his ass protruded a leather dog tail, the other end of the toy jammed into his butt. A thick leather collar encircled his neck, and a loose leash hung from it that dragged as he crawled.

It was only when Dylan glimpsed the dog’s face that he realized who it was. It was Charlie. His best friend. Swim team champion. And now… what? Pet? Mascot? Fuck toy? All of those, probably.

Charlie saw Dylan and Colton and his face froze. For three seconds, Charlie thought about how humiliated he felt, and how much he didn’t want his friends to see him like this. At the same time, Charlie was filled with pity for his friend Dylan, seeing him naked and greased up like that. Charlie knew what was in store for Dylan.

Reds, either drunk or crazy with success, were spread over sofas, standing on tables, dancing on a bar. There were only six Reds, Dylan had to remind himself. He counted five of them here. Rex was someplace else.

When they saw Dylan the Reds surrounded him, all but pushing Colton out of the way.

“Fuck, how the mighty have fallen,” one said.

This was worse for Dylan than he had imagined. Thing was, he knew all these guys. Most were his friends.

Mark and Dylan had known each other since freshman year. They had been roommates for Sophomore and Junior years. Dylan and Mark had shared great times together. Both were pretty good looking, so they had a lot of fun at parties with the local co-educational college, and scored lots of chicks together. In one instance Dylan had played the role of wingman so well, he had gotten Mark laid, something Mark was eternally grateful for. Mark had invited Dylan to his family’s summer home for a week. Mark and Dylan were close.

Drinking from his beer, Mark walked up to Dylan, and looked at his naked, bound friend from head to toe.

“How’s it hanging, slave? Not too low, I see,” Mark said, and playfully slapped Dylan’s dick.

Dylan was gagged, and unable to speak, but he looked at Mark with pleading eyes and made grunts that he hoped his friend understood as him pleading for help.

Mark casually laid his arm across his tied-up friend’s naked and glistening shoulders, and pulled him in close, like he was about to whisper a secret.

“When you get fucked up the ass, pretend like you’re taking a shit. It opens you up and makes it all less painful,” Mark said, loudly into Dylan’s ear.

The Reds laughed hilariously at that, and Mark reached over to Dylan’s face, and held his cheeks in, shaking his head softly like you would a baby. Without anyone noticing, Mark also moved the neck of his beer bottle down to Dylan’s helpless ass, and gently pressed it against Dylan’s ass cheeks.

A voice came from upstairs: “Set him up in the basement. Leave him there alone.”

The basement, Dylan thought, looked like a sex dungeon. Complete with bars on the windows. Several O-rings lined the floors, and some chains descended from the ceiling.

Mark put ankle cuffs on Dylan and latched each ankle to an O-ring in the floor, wide apart.

“Don’t freak out. I’ve got a plan. Play along,” Mark whispered to Dylan quickly. Then he trotted back up the stairs, leaving Dylan there, alone.

At the top of the stairs, Mark rejoined the party. He looked for where the dog, Charlie, was. He grabbed Charlie’s leash and led him outside to the patio.

“I might have an important job for you, doggie,” Mark said.

After he had sent Colton and Dylan into the house, Daniel had been attempting to work out his frustration. The scene had just been too hot. Dylan so humiliated, Colton so shy, yet so compliant. Colton had just let him tie him up!

The pain from his cock-cage was constant for Daniel, now. He desperately wanted to take it off, to just jerk off.

Then Mark came outside. At the sight of a Red uniform, Daniel stood straight, hands at his side.

“Do you have what I asked for?,” Mark asked Daniel.

Daniel nodded to a corner of his table. Mark looked there, and smiled.

“Good. And I’ll keep my end of the bargain. Take off your jock strap, slave,” Mark said, dangling a key from his hands.

Daniel stared at the key. The key to his cock cage. There was nothing in the world he wanted more. He took off his jock strap, immediately. Then he reached for the key.

“Oh, not so fast, slave. Hands over your head,” Mark commanded.

Daniel winced. Mark was going to be cruel to him. But, he accepted it. Daniel reached his hands up. Mark walked up to Daniel, and tied Daniel’s hands together with rope, then tied them to an overhead pipe.

“You’ve tied up so many other guys. Ever been tied up yourself?” Mark asked Daniel.

Mark teased Daniel by running a finger along Daniel’s ribs.

“Yes– yess– you were right–,” Daniel said, between laughter.

“And this,” Mark said, grasping Daniel’s locked cock cage, “is an important part of your motivation.”

“Please. You promised, if I got you that stuff, that you would…,” Daniel began.

“Yes, I know my promise. And I’ll keep it. But I’ll offer you another deal. Slave, I want you to picture something. Supreme Leader Rex, naked, blindfolded, gagged, and chained right here. Next to him, the other four Reds. All helpless. All yours to play with and enslave,”

“And I’ll sweeten the deal. On top of that, you get this. Come, doggie!,” Mark called out.

Charlie crawled out onto the patio on his hands and knees, the butt-plug tail still sticking out of his ass. Mark grabbed his leash and walked him over to right in front of Daniel.

Daniel had been hot for Charlie since seeing that glorious speedo photo of him on Instagram.

Charlie knelt on both of his knees, raised his body straight, and held out both his arms forward, wrists bent down, like he was imitating a dog. This showed off his lean, muscular torso, and, in particular, his gorgeous ripple of abs.

“I’ve got a special reward for you, slave. If this stuff works out for me,” Mark said, motioning to the items on the corner of the table, “then you’re going to fuck this hot swimmer slave. But otherwise, well, you’ll have to wait a lot longer for satisfaction,” Mark said.

For effect, Mark tickled Daniel’s stomach, right above the crotch. Daniel closed his eyes and groaned.

Mark turned Charlie around so that his ass faced Daniel’s erect, aching cock. He made Charlie kneel down, then tied his leash to an O-ring on the ground–very low, so that Charlie could barely lift his head. That left Charlie’s ass just inches away from Daniel’s cock.

“Master– please– I’ve kept my side of the bargain–,” Daniel said, pleadingly.

“Don’t worry,” Mark said, as he scooped up the items on the corner of the table and pocketed them, “if all goes as planned, you’ll have more guys to fuck than you can handle. Until then, how do you say it? Accept your place,” Mark said.

Daniel watched as Mark walked away with all the keys to his freedom. Daniel winced and tried not to think about his aching balls and dick.

Metal would like to thank the author, Jackson Amacher, for sharing this story! Be sure to leave a message in the comments below 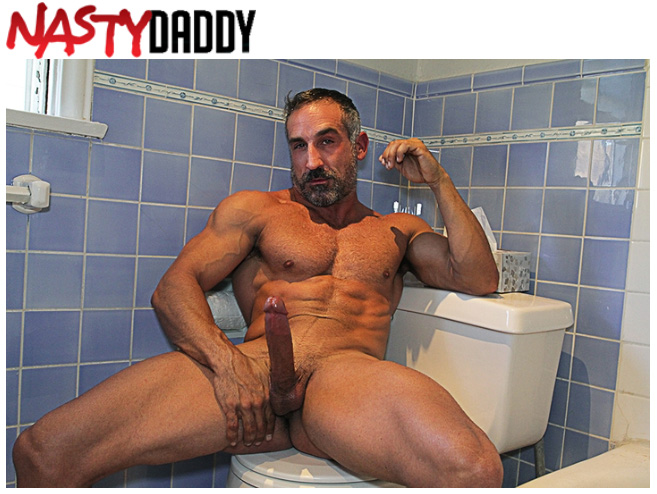