Colton remembered. The rules are simple. The exercise lasts two days. Each team has a fort. Each fort has a prison. The winning team is the one that has the most prisoners in its prison at the end of the two days.

The Reds had taken over this house, and were living in it, but it was, Colton knew, actually the Blue fort. And that basement was the Blue prison.

There was a thermostat on the wall. Colton switched off the air conditioning. Then, he flipped a few more switches and turned a dial. He heard the old furnace in that basement rumble to life. The furnace would have that basement, and the whole house, positively boiling pretty soon.

Colton went outside. And he saw them there: Daniel, naked, and with what looked like a metal condom over his dick, his arms chained above his head. And Charlie.

Colton and Charlie were friends. They had been since freshman year. Colton’s heart sank when he saw his friend like this: crouched naked on the ground, costume dog ears strapped to his head, and, worst of all, a butt plug jammed up his ass, with a tail coming out the other end. A thick leather collar encircled his neck, and a rope was tied from it to the ground.

Why, Colton wondered, didn’t his friend take that shit off? His hands weren’t tied.

Colton untied Charlie from the ground. Then he reached for the butt plug.

Charlie hung his head in despair. The constant humiliation must be awful, Colton thought.

Just then, they could all hear loud pounding and shouting from the basement door.

“Uh, excuse me, I should go deal with that,” Colton said.

“You two look adorable, really. But, could you please take a few seconds to untie me?,” Daniel asked.

“Hang in there,” Colton called over his shoulder.

From the basement, some of the Reds were pounding on the door.

Trying to knock it off its hinges, possibly. Colton quieted them by knocking from his side.

Colton could feel how hot the air had become in the short time he had been outside.

“Let us out,” came a voice from inside.

“Can you all hear me? Good. Here’s the deal. I’ve got a team of Blues here now, with some Whites for muscle. The game is over for you Reds. You’re all going to spend the night in there, sweating, lying on the concrete floor, unable to sleep, fighting each other for space, maybe even for air. Right until the referees come to release you, and declare the Blues the winner. You won’t only lose, you’ll lose as prisoners. But, because I’m generous, I have a deal to offer,” Colton said.

He paused. They were quiet down there, now.

“In one hour, two of you will be let free. We’ll let you sleep here overnight, and then we’ll let you escape. Naked, of course, but free. All you have to do to get that free pass out of the basement is to bring us everyone else’s clothes. Dominate your fellow Reds the way you dominated the rest of us,” Colton said.

Colton heard silence down there. Then the sound of fighting.

Colton grabbed Charlie’s leash and led him outside. He found Daniel there, with his left hand almost entirely free of the rope.

“Mark should’ve used handcuffs. One second,” Daniel said. And then he freed his left hand, and untied his right.

“Well, not yet, but, we’re getting there,” Colton said, somewhat surprised.

“Fine, fine. Let me know if you have some Reds you want tied up and enslaved,” Daniel said.

“You’re pretty laid back about it all,” Colton said.

Rubbing his wrists and shoulders, Daniel walked up to Colton and Charlie.

“Whoever is in charge, I’m here to help them out. I consider it a win whenever I get to practice my art on studs like the two of you,” Daniel said.

“To win, though, you’re going to want to make sure you have more prisoners than they have back at the Red camp. I wouldn’t be so sure of that. They’ve tied up all of the White team in there, except for the ones who are out on work duty. They’ve got the two captains, Ryan and James, in their prison, permanently chained to a block of drying concrete. Have you checked their control room? You can see their prison through the cameras there. You could even, I suppose, use the radio to command your fellow Blues to release the Whites and march them up here to the basement,” Daniel said, while he absent-mindedly rubbed his shoulders.

“Where is the control room?,” Colton asked.

“It’s in that shed, right over there,” Daniel said.

Colton went to the shed. The door was locked with a combination lock. But through the window, he could see that Daniel wasn’t lying.

“I know the combination,” Daniel said.

Daniel laughed. He walked over to his discarded jock strap, and slowly, and tenderly, pulled it on over his cock cage.

“Feels good to be in charge again,” Daniel said, stretching his arms and snapping his own waistband.

“Daniel, tell me what you want,” Colton said.

Daniel stared at Colton’s naked, lean body, and his gigantic dick. Colton’s face was so innocent, and trusting.

Daniel stared at Charlie, crouching submissively on the ground. Charlie was smarter. Charlie knew what Daniel was going to ask for. Charlie was silently mouthing the word “please” and shaking his head while keeping eye contact with Daniel.

“I want to see you two fuck,” Daniel said, simply.

“Guess you don’t want to win,” Daniel said. He stood, and started to leave.

“I could just walk to the camp and tell the Blues what’s going on,” Colton said.

“You’re naked. And Ernie’s on a power trip over there, right now, trying to become head of the Blues. He’s more likely to tie you up, fuck you, and make you a prisoner than he is likely to agree to free all of his prisoners. He’ll only obey if he hears a command come through from the control room,” Daniel said, staring at his fingernails.

Colton stared at Charlie. They made eye contact. Charlie could not speak, but he nodded, solemnly, as if to say: It’s OK. Colton did the same.

“That’s enough. Now, Colton, get on your hands and knees, right next to Charlie,” Daniel said.

Colton shared an embarrassed look with his friend and crouched down as ordered, his ass in the air.

“Charlie, mount Colton like a dog and fuck him,” Daniel said.

Staying in his crouching position, Charlie crawled on top of Colton, pushing him to the ground slightly, and then eased his erect dick into Colton’s ass. Despite the humiliating, demeaning situation, Colton was surprised at how gentle and tender Charlie was. At first, at least. As the sex went on, Charlie made lots of short, jerking motions, a lot like a dog.

Daniel walked around the two as Charlie humped Colton. He particularly enjoyed looking at Colton’s face as he was fucked for the first time by his friend. He especially liked the sight of Charlie’s butt-plug tail, still sticking out of his ass, wobbling as Charlie fucked Colton.

Daniel walked to his table and grabbed a collar. Nonchalantly, he walked over to the two men, and put the collar on Colton. Colton was too preoccupied to ask why, or to object.

Charlie’s grunts became more frequent, and his pitch went up an octave. Daniel saw Charlie’s body tense up, and Charlie made a face that made it clear that he had just experienced some of the best sex of his life.

“But, you’re not done, yet. Charlie, get on all fours. Colton, you too,” Daniel said.

“Now, then, if I do this quickly, Charlie’s restraining bolt won’t zap him,” Daniel said.

Daniel grabbed the “tail” out of Charlie’s ass. Then, wasting no time, he inserted it into Colton’s ass.

“Get on top of him, Colton. Hurry! The timer’s running. That tail needs to stay within a foot or so of his dick,” Daniel said.

“You’ve got to keep your bodies close, or he’ll get shocked. Here,” Daniel said, taking a very short chain from his table. Daniel locked one end to Colton’s new collar and the other to Charlie’s collar, putting the two literally neck-to-neck.

“That’s the warning tone! Get closer to him, Colton. Go ahead and fuck him!,” Daniel shouted.

Colton was rock hard. He closed the distance between himself and Charlie. In one fast, immediate movement, he thrust inside Charlie, bringing his hips all the way to Charlie’s ass. Charlie yelped and cried out with pain.

Daniel wrapped a single belt around both their waists and tied it tight.

“What the fuck?,” Colton called out.

But Daniel ignored him. He grabbed Charlie’s hands and pulled them back behind him, crossed them behind Colton, and handcuffed them there.

Then Daniel started walking toward the house, leaving them.

“I’d say you can squirm out of there on your own, once your dick softens, at least. And so long as you don’t mind Charlie getting a nasty shock,” Daniel said.

“Do you even know that combination?,” Colton shouted out.

“Of course not. You two have fun, I’m going to get my dick freed,” Daniel said, over his shoulder.

Metal would like to thank Jackson Amacher for sharing this story! 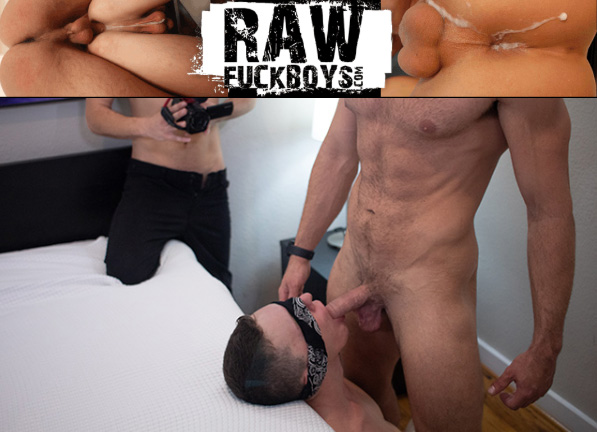 One thought on “The Rules of the Game – Chapter 07”