Elliott grabbed Chris’s arm and assisted him off the chair and walked him towards the desk. He unlocked Chris’s cuffs from behind his back and told him to put his hands on his head. Chris had dressed very casual for the occasion, quite unlike Tom. He was wearing a t-shirt, shorts and flip flops. Looking at him, Tom guessed that he was a little taller than himself, and while he clearly went to the gym he was not muscle toned to the extent the two cops were. Nonetheless, Tom found him immensely attractive.

Chris handed over his possessions as he was instructed to before being finger printed. He was told he was to be given a strip search. Chris felt his heart flutter a little, while Tom was just as excited to have a ring side seat. Chris took off his flip flops and put them in the plastic tray provided before taking off his t-shirt and shorts. He stood there in a pair of black Calvin Klein briefs, filled to capacity by his bugling dick. As he pulled them down Tom could see Chris’s semi-erect dick leaking precum.

Elliott snapped on a pair of latex gloves before examining parts of Chris’s body. Chris was told to stand with his hands on the back of his head while Elliott looked into his mouth and ears and lifted his dick. He was then asked to show the soles on his feet before Elliott told him to bend over for a cavity search. Chris did so; the expression on his face told Tom that he wasn’t expecting this, but Tom grew more excited at the spectacle, knowing he would be next.

END_OF_DOCUMENT_TOKEN_TO_BE_REPLACED 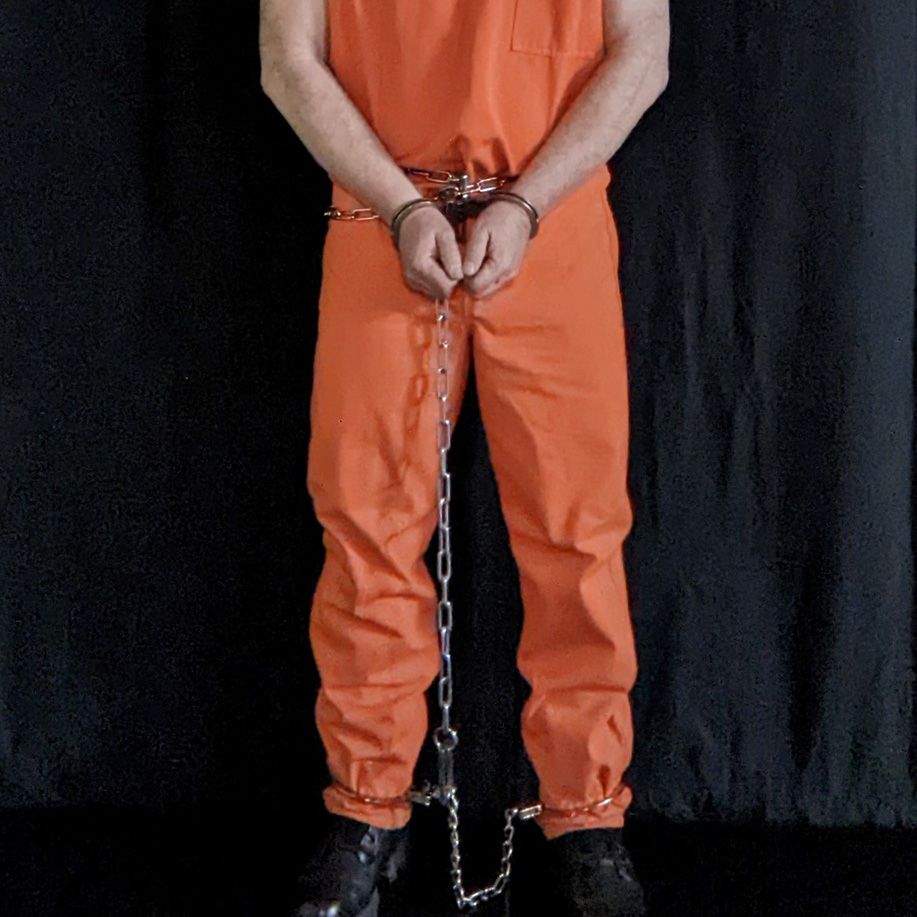 “If you can sleep at all, we should try to doze off for a while,” Matt suggested.

I nodded my head in agreement and looked straight up at the evening sky. It was a nice night out. I closed my eyes and drifted off to a fitful sleep.

There was a shooting pain to my balls that woke me up unexpectedly. I yelled loud enough to startle Matt spread out next to me. When I gained my composure I saw Daniel standing over me with his boot on the rope leading from my balls to the stake. He was looking directly down at me. He placed his full weight onto the rope again pressing it down into the dirt and eliciting another scream from me as the rope pulled on my balls.

It was still dark out. I had no idea what time it could be or how soon before the sunrise would take place. My shoulders were on fire from being stretched and my balls were aching from the abuse Daniel was inflicting.

END_OF_DOCUMENT_TOKEN_TO_BE_REPLACED

Chapter 9: Someone Up There Likes Me

The answer was obvious: I’d keep up with my classes and try my best to keep up with my fantasies– same as always, because I was never gonna wind up on St. Bevons as a slappie anyhow.  If I got rejected, big fuckin deal.  But of course that’s not the way I felt.  I wanted them to accept me!  Cmon, after all those Steps, isn’t that what you’d want?

So the next few days were pretty miserable and anxious.  Finally I had to make a rule that I’d check my mail only twice a day, instead of jumping into my phone every minute.  That’s why it took me about eight hours to find the new message from SLPOUTREACH: “Joel Barlow:  We are pleased to inform you that on review of your Application, Documents, and Interview, you have been accepted for admission to the State Labour Program.  You are now permitted to proceed to Step 4.  THIS STEP MUST BE COMPLETED WITHIN 30 DAYS OF THE DATE OF THIS MESSAGE, OR YOUR ACCEPTANCE WILL BE CANCELED.  Use the following password.”

END_OF_DOCUMENT_TOKEN_TO_BE_REPLACED

Chapter 4: What I Saw from the Coffee Deck

The Coffee Deck was a place where you could sit in a chair and look out to sea.  Coffee was served from a cart at the entrance.  At the other end of the resort, the beach came right up to the “facilities,” but this end was on a hill, and the hill was all rustic with brush and shit.  If there was a trail down to the beach, nobody’d put up a sign for it.  But anyway, Patrick said to get there early, so I did.

When I arrived—at 7 a.m.!—there was nobody around except me and an old waiter manning the cart.  When he brought me my coffee he said, “It is unfortunate, sir.  They are working down there—underneath us.  Making the trail.  They do it every day. Often there is noise.  If so, you may wish to return in the afternoon.”  Then I heard it—the noise of men cutting and whacking and shoveling and hauling, somewhere beyond the polished rail that ran around the Coffee Deck.

I leaned over the rail, and I saw them—slappies, a whole crew of them.  They were dressed like Dobie and Patrick, but they were working at stuff that had nothing to do with queer boys from North America who did housework in the morning and sex in the afternoon.

END_OF_DOCUMENT_TOKEN_TO_BE_REPLACED

The following day I didn’t wake up until the early afternoon. Partly the result of exhaustion of the previous few weeks, but more to do with the hangover I was now experiencing from the day before. It was the banging on the door that woke me. I stumbled out of bed and opened the door to find Mike standing there.

‘God, you look awful,’ he said. I stepped back and he came in. ‘Why don’t you take a shower, while I fix some coffee.’

I did as he suggested, and Mike had made some strong coffee by the time I got out.

‘How come you look so good?’ I asked.

‘Because I stopped drinking about three hours before you did.’

END_OF_DOCUMENT_TOKEN_TO_BE_REPLACED

Reality bleeding observed in bodily reactions upon first exposure of clubslave2_alphav1.0_06/17/20XX to Subject L. Subject L had “lost” their desire to ejaculate and/or experience orgasm after exposure. Narrative simulations may have persuasive effect on portrayed character due to inherent character designs which exhibit a clear dominant/submissive dynamic.

(Note: L had one prior exposure to portrayed characters in the [clubslave] line of scenarios. Narrative exposure time, authenticity, and integrity may be crucial to fully utilise reality bleeding.)

END_OF_DOCUMENT_TOKEN_TO_BE_REPLACED

Something woke Jack Thomson from his troubled doze. He struggled, but his arms remained outstretched, roped. Instead he only succeeded in tormenting his prick, tied to the saddle horn, and his ass hole with its invasive thick plug. Unable to see or hear much through the thick leather of the hood, or to move his hobbled legs, he wobbled in the saddle atop the wooden saddle rack.

The leather creaked and then he heard the ching of those damned spurs of Ranger Brad Steenbeck, whose voice seemed far away, “Wake up, kid, time to get moving.” His penis was released, then his legs and finally his arms. But the Aggie still couldn’t see anything through the leather across his face, and his mouth was sore and dry from the tight gag. “Come on, try to dismount.” Jack could feel Brad’s arms supporting him, as he willed his tired muscles to move, after his all-night torment. He finally slid out of the saddle, to be held by the ranger, who untied the hood and the leather gag.

END_OF_DOCUMENT_TOKEN_TO_BE_REPLACED

My brother and I stood in our cells watching as the leather troopers dragged our Sir from his cell. He shuffled along at the end of the heavy leash they hooked to his collar. He was still locked in the steel bondage helmet so he had very little vision so shuffled slowly depending on the leash to guide him. They took him through the back door of the cells which appeared to be the one I saw them use that morning.

We shuffled over to the cots and sat down taking the pressure off of our necks and backs as the chains we wore forced us to stoop a little to take the pressure off of our bodies. We looked at each other and I asked him what should we do next. We really had no options available to us as we were both padlocked into heavy 5 point chains and locked in a jail cell.

Really no way to escape unless we could figure out a way to overpower the troopers and get the keys to our chains. We both looked at each other and discounted that option as the wrist shackles had short chains so we did not have much movement for our hands and arms so that seemed like a faint hope.