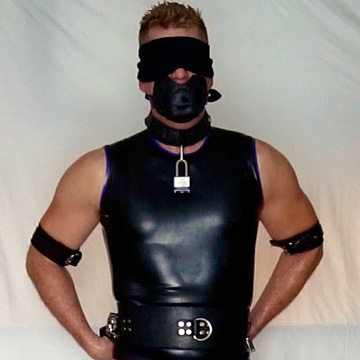 Recap: When last we left our five hapless, young heroes, they were trapped inside an escape room trying to get free. Their efforts failed and they found themselves gassed out, once again rendered into unconsciousness.

They are in the same concrete-floored, wood paneled room that remains dimly lit. It’s warm and humid with a faint hint of body odor. It smells like young men in peril!

Three of the young men, still clad only in their underwear, are piled asleep on top of each other. They slowly wake up. We see Derek, Mike and Adam. Their heads are pounding from the chloroform gas that knocked them out earlier.

“This is some freaky shit, Derek,” Adam laughs, rubbing his eyes, then casually reaches in to his underwear to scratch his ball sack. “At least no one’s gone after our nuts!”

“You love it, I said it was intense,” Derek lauds back.

Though they aren’t restrained, the three boys notice they have leather restraint cuffs attached to their wrists and ankles.

“This is so gay,” Mike yaps, looking at the leather cuffs that have been secured shut with locks so they can’t be removed.

“Mmpphhh!” a mad plea for assistance calls out. It’s Nick. He has been bolted spread eagle against a wall opposite them. His mouth is still gagged, just as before. Being forced, spread out like a big letter X isn’t the worst of sights for Derek to observe. He’s always had a secret crush on Nick. He admires the beads of perspiration running from Nick’s puffs of armpit hair, down his sides and soaking in to his blue nylon boxer briefs as he squirms.

“Guess our hosts know Nick talks too much,” Adam laughs as the three boys head over to Nick’s aid, who gasps and grunts.

They can’t get his gag off, which is very effectively attached to his face with a two-digit combination lock on the front. They can’t help but notice a hint of dirty, white ankle socks peeking out the sides of the muzzle gag. Adam relishes in the familiar smell of his stinky, well-used socks in Nick’s mouth.

They also fiddle with Nick’s wrist and ankle restraints. They’re padlocked, however, and impossible to remove from the sizeable bolts in the wall. Adam also takes delight in Nick’s feeble state and has a little homoerotic bro to bro fun. He pulls open the waistband of Nick’s tight briefs from his crotch and mocks his buddies dick size. “Phhfffuucker!” Nick grunts. Derek can’t help but lean in and take a peak himself. There’s definitely nothing to mock in his opinion.

Suddenly, the TV screen on the wall turns on and more instructions are written on the display:

“Welcome to Round 2. Remember! If you stay in the game and survive, you get cold hard cash…”

The monitor now shows an image of another room. They see their friend Tyler in that room. He’s tied town with straps to a padded table in the middle of it. The tall, well-built football jock looks pretty embarrassed realizing a camera is on him. He’s been silenced with a red ball gag to add to the humiliation. Some type of wires with white rubber pads on the end are attached to all parts of his half-nude sweaty body.

“Your teammate needs you. In 30 minutes, our electrode machine turns on and ZAP! Powerless Tyler probably won’t last. They all tap out!”

“We can always use the safe word or signal,” Derek reassures.

“Hell no! We’re winning!” Adam brags. “ISN’T THAT RIGHT TYLER!” he shouts at the top of his lungs.

Poor Nick, gasps and nods his head too, wanting his own acknowledgement, which makes the other boys laugh. Adam ruffles Nick’s shaggy, dusty blond hair. “Hey, at least you got my funky gym socks to suck on, pretty boy.”

The instructions continue while continuing to show their helpless friend on camera:

“You could hold the key to Tyler’s survival. Free him and you all advance to another round.”

The boys immediately start to look around and list off ideas and thoughts.

The instructions, though, are not quite done and provide a puzzling rhyme:

“Here are your hints for keys to success:

•  “Believe in lady luck? Letter help you but thrice is the price.”

• “Butt a buck or two can spread better luck.”

The sweaty, half-naked boys stand around Nick trying to get his gag off. Soon they realize it is of no use without the combination.

A final message on the television reads:

“Last, dear boys. Don’t pity Tyler’s lonely displacement. He’ll be watching your futile attempts from a monitor above for his amusement.”

The live feed of Tyler remains on the screen but now the ominous large font with the countdown begins:

“Yea and remember. These games love numbers and keys! We a clue to get this off him,” Derek provides tapping on large dual combo dial locking Nick’s gag.

They fan out around the sparse room and quickly determine there’s nothing to be found.

To Nick’s annoyance, the boys start searching his actual body. Their sweaty hands and fingers are poking and prodding around his defenseless figure. From top to bottom, they inspect his sweaty thick hair, his earlobes, his smelly armpits. The look at his feet and spread his toes. Adam even yanks down poor Nick’s underwear, exposing his handsome jewels. Derek can’t resist but search a little more thoroughly here, helping Adam inspect around and inside Nick’s pubic hair. They do not find a clue but Derek finds a nice warm, sweaty nutsack to grope. Nick whimpers with his disapproval.

Meanwhile, Tyler helplessly watches the guys on the monitor looking like keystone cops. No strategy. Wasting time. Not thinking. And Tyler, taking in what he sees on the monitor is certain he’s figured it out. The first clue. He’s powerless to help his buddies help him, though.

Before they knew it, they had less than nine minutes on the countdown timer:

“I think the clue says we have three guesses, let’s just make one guess,” Derek suggests.

The others shrug and put in a combination on the locker. They pick ‘21’ randomly. Of course, it doesn’t work.

Like his comrade in bondage in the other room, Nick has also figured out the first clue by observing the monitor from his end. And like Tyler, his knowledge is completely useless and he can only sit back in his restraints and watch the ticking clock.

Derek once again explores other parts of the room. He finally turns back to ask a question when he observes what Nick and Tyler have been observing the whole time.

“Guys? Maybe THEY are the clue. What do they look like?” Derek suggests.

“Seriously!” Derek lights up. “A ‘buck or two can spread better luck.’ Bucks are male. Dudes spread out like them!” pointing to Nick and Tyler’s spread eagle predicament. “And ‘letter’ was in the clue. They look like…”

“Genius dude! Letter X! But wait it’s a number combo so we have to connect that.” Mike thinks out loud.

The boys don’t hesitate and key in 22 on the combination lock over Nick’s gag.

“You ding bat,” Derek says to Adam, immediately realizing the error. “There’s 26 letters in the alphabet. So it’s this one!”

Nick nervously leers his eyes down watching Derek’s sweaty finger tips move the dials of the pad lock. Is he going to do the math right?

The clock countdown is now:

“Presto!” Derek says with pride. There’s a pregnant pause. Nothing happens. The lock doesn’t free the gag. Nick sighs in silence. What?

“Not cool. Not cool,” Mike says looking up at monitor and shouting “Stay together bud! We’re still coming!”

Tyler can be seen on the monitor flush with sweat, looking nervous, stiffened up as in ready to embrace the pain should it come to that. He doesn’t want to quit so he’ll do all he can to not tap out.

“No no, that’s it!” Derek insists. “24!” He re-adjusts the two digit dials just slightly and CLICK! it comes apart. The thick, leather muzzle gag falls away from Nick’s face! It worked!

Nick spits out the saliva-soaked socks that belonged to Adam. “Ahhhh!!!” he gasps with pleasure. “Your rank ass feet are going stay in my mouth for a year!” he yaps at Adam.

The timer countdown on the monitor now reads:

“Guys hurry, what’s next?” Nick says without wasting any time, but gasping for breath.

“A key?” Derek reminds him.

“Wait! Something was in that sock that was hard. Look in the sock!” Nick shouts.

Adam kneels to the concrete floor and delicately picks up the balled up salvia coated ankle socks and shakes them. “I’ll never wear these gross things again,” Adam laughs.

Adam shakes the socks some more from the tips of his fingers and, sure enough, a key, falls out.

“Where does it go? Did you find a lock or door?” Nick asks. The boys say no.

“Wait!” Derek thinks in a flash. “Another out of place spelling was ‘butt’ b u t t. So something to do with his ass?”

“Oh hell no!” Nick protests. Adam playfully places his hand over Nick’s mouth to shut him up as the boys grab Nick by his torso and butt cheeks, pushing his behind away from the wall. A lucky Derek had the honor of reaching first between Nick’s legs, underneath his warm sweaty crotch, so he could fumble for anything behind his ass.

They could hear on the live feed the noise of something electrical. They could witness Tyler getting subjected to that cruel web of wires taped to his body. ZZZAAAPP!!! BUZZZZZ!!!!

“Mmhmmmmm!!!! Mmhhmmm! Mmmmmmm!” Tyler could be heard wailing as he jerked and vibrated on the padded table, holding the stiffest disposition as if trying to fight off the effects.

“Man, does that shit really hurt him?” Mike asks.

“He’ll grunt three times. That’s the deal,” Derek assured referring to the safety signal. However, that meant Tyler being removed from the game.

Derek is continuing to file around awkwardly behind Nick’s ass, knelt below Nick’s underwear, searching for something behind him. To Nick’s relief, Derek found a hole back there in the wall – not his actual hole! — and inserted the key inside. He turns it counter-clockwise. Another pregnant pause.

The boys here a sound in their darkened room. Something opened up. What?

On the opposite wall from where they stood with Nick, a large panel became ajar! The menacing buzzing sound from the monitor was now being naturally emitted through the opened doorway. Louder! Tyler was next door!

“Hurry!” they said rushing. Even Nick, whose restraints were somehow released magnetically from the wall, joined them to race to their friend’s rescue.

“Rip ‘em off!” Adam called out to the rest. They followed his lead, quickly peeling off the wired, rubber adhesive pads from around Tyler’s helpless bound body.

When the last wired pad was removed from Tyler, his whole body went limp and relaxed. The beautiful, tough jock quite the sight, dripping in sweat that soaked his plaid boxers. With his intense blue eyes, he looked at his friends and gave a gesture of thanks.

A few moments later, more information is presented. This time it isn’t writing on a monitor. It is an ominous voice, heavily distorted with digital effects, over a loudspeaker:

“I see you boys have brains and bravery. But do you have humility? We’ll see. Up next is your final test, Round three!”

“Weird he’s already telling us the last round is next. Good, right?” Derek wonders.

“Yea well that means its whatever it is…” Mike began.

Thanks to SockgaggedJason for this story!

3 thoughts on “The Subjection – A TUGs Escape Room Challenge: Part 2”