The truck didn’t take me to the field hand barracks, where I thought I was going. It turned into the driveway to Mr. Hamilton’s house instead. I thought, this is probly what he does whenever he buys a new workie — he wants to see the goods. But —  OK, this is just too hard to talk about, except just a little bit. We pulled up to the side door of the house and I was handed over to this old workie named Cicero, who’s the bigshot up there, and he gave me this funny look and said, “Yes, we’ve been expecting you. Mr. Hamilton is busy right now; I’ll take you to your room.” So right away, it was a room not a barracks.

So he took me down to the basement — which is really nice, for a basement — and he unlocked the door to a little room and told me to wait in there, and he closed the door and locked it, and yeah, it wasn’t a barracks at all, it was just like a bedroom, with a bed and a dresser and a little mirror and so on, so what the hell? It was almost like I was back at home! I did remember how Butch was living someplace next to the House, so maybe this was good, cuz maybe he was still there! Which would be SO great! But I never thought they’d keep him there. I always thought he’d get sent back to the coffle. That’s just what I thought, from looking at him.

So I didn’t know what to think about anything. Then this Cicero guy came back and I started to say how I wanted to be down where the coffled guys were, and he looked at me like I was crazy and he said, “You’ll do as you’re told. And don’t say any shit like that to Mr. Hamilton. He wants you in the House.” So wow! Then the next thing I know, he’s walking me up these big stairs like a museum and now we’re in Mr. Hamilton’s bedroom, and him and this other guy — who I now know was Mr. Thomasen, his boyfriend — are looking at me and telling me to turn around and take off my cap and put it back on again, and they’re saying, “Yeah, looks like it’ll do” and “Need to give it a skills test though” and “Good night for it” and some other stuff that I was starting to figure out what it meant, just by the way they were saying it. So then I was scared! I couldn’t think what to do, and actually there wasn’t anything I could do. “You know,” Mr. Thomasen said, “I think it’s a virgin.”

Mr. Hamilton started to say something, but then the door opened and somebody came in. He was another workie, like me, and he was about the same age, little older, and he was really cute. I mean really, really cute. Although part of it came from the eyeliner! And maybe something he did to perk up his complexion. And he just came through the door like he wasn’t even a workie and came right up to Mr. Hamilton.

Jody looked at me. Then he started SCREAMING! I didn’t really understand what he was saying; I just saw Mr. Hamilton and Mr. Thomasen take a step backwards, and they started saying things like “of course nothing will change your position here,” and he started saying “then why did you buy this little cunt?” Then Cicero comes in and takes me out of the room and puts me in “my room.” Doesn’t say anything, just gives me some food. And locks me in. I’m so tired and confused and … disappointed! I can’t even think. But finally I fell asleep.

Next morning, more food, not so good. I’m fuckin wiped out. I left my house with my bedroom and so on, and here I am in another house and another bedroom, with these bizarre queers fighting about me! Worse than my dad and me when we had that fight. Only good thing, when I wake up in the morning the first thing I see is LUCKY on my shirt. My new name! That I’m so happy about! But maybe now it’s just a joke and I’m not lucky at all.

Don’t they say that the whole thing about jokes is their “timing”? Not sure what that means in my case, because that joke seemed to go on all day. I just laid on the bed and tried not to think, which was easier for me, cuz I’d been through the Reception and Processing Unit — LOL! But it’s true. From time to time I could hear yelling someplace in the house, but I couldn’t catch what was said, and then it would go away. So, all dressed up and noplace to go! Then suddenly Cicero unlocked the door, snapped a leash on my collar, and led me out to a truck that took me right down to the barracks! Which was where I wanted to be!

Although when I got off the truck I was still all confused and desperate and so on, with all these big workies standing around and staring at me. NOW what’s gonna happen to me? I thought. And THEN I recognized Butch, and he recognized me, and pretty soon — everything was perfect! Sex and everything!

Butch is EXACTLY the way I thought he would be! EXACTLY! He’s really like, conservative and, like … pessimistic, and he doesn’t like “trouble,” and he’s always into doin everything the same way, every day — which is great when you’re coffled, right?! But also, he doesn’t like to talk very much, and he won’t say, “I love you!”, which I tell him every day — which is fine, because I like to stalk him and tease him and I know if he didn’t enjoy it, he’d just slap me across the face and I’d stop. Which of course he doesn’t. But I think he’s that way because of all that stuff he finally told me, like how he was this little faggot that Mr. Thomasen kept around, and he was all limp and mouthy and stupid and shit, and then he was a workie and it all had to change. Which he didn’t want to happen, but it did — and that’s hot for me! Because I was exactly the opposite. I mean, I NEVER had sex! NO rich guys. NOT livin in the lap of luxury. OK, I’m still pretty mouthy! But when I tell Butch that I love him, he says, “I guess the gears fit together.” Pretty good, huh? And I think he’s SO hot!!! Which I don’t think I would have thought, back in the day, before he was a workie.

So what can I say beyond that?

A year or so after I was sent DOWN to the barracks (lol!) I was on my way to chow and hey! who’s the new workie? It was Jody! He was marching into chow along with the other dudes from Barn Number 4, and he did NOT look happy! So he’d been sent down too. There’s a buncha stories about that, but I don’t know which one is true. I guess he’d run out of shelf life. But like Mr. Sinclair said, Mr. Hamilton doesn’t part with his stock, so he got Jody a new job, and it was out on the coffle. I guess he got used to it, because I see him around, and he looks like any other workie now.

The other news is what happened two days ago. Butch got a new collar! Seems like his neck was gettin too big for the old one. Which happens, with all the work we do on the coffle. Muscles grow! He didn’t really think he needed a new one, but the vet came by and checked us all out, and that’s what he said. So a few weeks later, a couple guys showed up, and they’re called the blacksmiths. They took Butch out on the road in front of the barracks and they sat him down on a block of concrete that’s out there and they covered his face and his neck and so on with a thick black hood, and they started in with an electric saw, to cut through his collar. Took them a while, and I was getting anxious, like maybe he’d smother in there! But then they took off his hood and he was all right. Maybe sorta dazed or something. He told me later it was so weird not wearing a collar, he could hardly tell where he was.

It didn’t last long, though. They measured his neck and got a collar out of their truck that they thought would fit him, and they stamped his number on it and put it around his neck, and click! He was collared again. Then he stood up and walked back into the barracks and looked around and gave me a kiss and said, “I’m gettin bigger all the time,” meaning you know what. So that night was SO fuckin great. But actually, they all are, even when we’re just lyin there, tryin to find out if there’s any stars we can see through the window with all the bars on it. Which there usually are.

And hey! Nobody ever said I was a giant muscle-bound workie! But maybe in a few years, I can get a new collar myself. How about you? How do you think you’d look in one?

Metal would like to thank the author, Joshua Ryan, for sharing this story! For other prison stories, go to prisonfictions.bdsmlr.com and prisonprocess 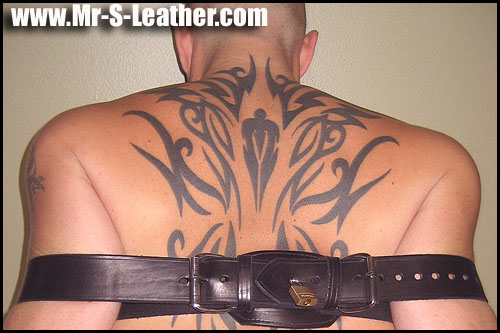