THE SAGA CONTINUES IN A DIFFERENT DIRECTION

In Chapter 8 the West Virginia experience was reaching its climax and quickly ground to a halt. The other prisoner for the weekend somehow managed to escape the compound in the dead of night after a severe flogging at camp. I was back in my cell when all hell broke loose as the jailers searched for the escapee.

At first light the decision was made to break camp and call it quits for the weekend. Half of the campers were spread out thru the area searching for the prisoner, the remainder of the men proceeded to break down and store equipment. I was loaded in Wytheville County orange prison jumpsuit, in cuffs and leg irons — a plastic bag on the front seat with my keys and wallet and a file folder.

Not much was said as the men were not too happy with the outcome, and the indication that the escaped prisoner would be punished if caught. Once we were about to return to I-79 for the return, the car stopped along the road and a well-used “humane restraint gag” was taken from the trunk and padlocked on me. Then travel resumed with conversation between the two men in the front.

About ten miles from my apartment, the older of the two men (who was a PO Officer) told me to expect changes in procedures due to the prisoner’s abrupt departure. Details would be forwarded once decided by the group. They stopped for coffee, and while in the parking lot they installed a transponder on my left ankle. At my apartment building the cuffs and leg irons were removed, I was handed a plastic bag with my street clothes, and another bag with my wallet, id, and keys. But no car! The gag was removed and I as I started to speak, I was told the car would be returned in three days. The doors were unlocked, and the car pulled away from the curb. I was able to get into the lobby and up to my apartment without any encounters with my neighbors.

When I entered my apartment, it was obvious someone had been there while I was away. Initially I could not determine anything missing but the place had been searched. So after a long hot shower, I sat at my kitchen table and started to review what was in the bag with the file folder. This is when things take a completely different direction.

As I mentioned earlier in this story, I was forced to sign a series of papers — Power Of Attorney, Medical Power of Attorney, Commitment papers, Parole papers, Guilty Plea, etc.

At that point it was just my signature, nothing else. Now the papers had been completed, signed and filed in Wytheville County. A Judge, the Parole Officer in the car with me, and a District Attorney. All of this (whether it was real or fake) was unnerving. I also had the tatt mark on my right wrist and leg, as a souvenir of the weekend experience.

I was exhausted and had my own job to return to in the morning on Tuesday.

I work from my apartment during the pandemic, and now it seems that will be a permanent workplace for me. Life returns to “normal” as I had my job which usually takes two to three hours per day, and cleaners and supermarket to get caught up with.

Although this is the boring part, the story needs to be told. Three days later my car is sitting in the lot with the keys in the glovebox. It now has West Virginia license plates, and the owner’s card is West Virginia issue in the name of the parole officer.

The next day the doorbell rings and the PO with another man enter my apartment. I am told that I will be moving to another apartment in the area and this is the Mover who is handling the transfer. I was stunned. Later I found out that my belongings except clothes, personal items and computer were to be sold. My personal stuff would be moved to the new apartment. These two men carried on the discussion without any input from me. They would return the next day with a crew to pack up my stuff, and I was to continue doing my computer sales work as normal. I was to be showered shaved and in sweatpants and tee shirt for their arrival and await further instructions.

So the cell without bars is getting smaller — and tighter — and more intimidating.

On the fifth day, the PO shows up in his state car, gives me 30 minutes to get dressed and walks me to his car where I am placed in the back, cuffed only. A flatbed tow arrives and takes my car. We drive for about an hour toward the West Virginia line and just across the border exit I-79 and proceed to a commercial building with stores in the front and apartments above. In the rear of the building is a garage and small apartment attached. It appears this is to be my new apartment. Private, and in the rear of the complex with a garage for my car and plenty of room to park. I am ushered into the apartment. It is furnished completely and soon my personal effects will be there for me to unpack and set up. The windows are barred, and most of the windows are tinted or painted. Later I would find out what else is there — and guess what? The PO has his office in the building in front of my garage apartment space.

Now the town truck pulls up with what used to be my car.

The PO comes into the room and says that it will be a comfortable place for me to live out my incarceration. Should I make an attempt to escape, I will end up in the same cell as my weekend buddy, who was caught yesterday.

On and by the way, bend over the bed and let Jerry the tow driver have some relief from the long drive.

The new apartment is clean, modern and on the ground floor. Several doors have combination locks — the front door, and two interior doors in the apartment. The actual apartment is one bedroom, a bath, a small kitchen and a side room. Obviously, the building has other areas but those are restricted.

After I was bent over and deep drilled by the tow truck operator, I was alone and free to unpack personal belongings.

In a folder on the table was a copy of the various legal forms posted on my behalf, and a small sheet with important phone numbers in case of emergency, three phone numbers one of which I knew as the parole officer’s cell phone, and two other unknown numbers. Naturally I fired up my laptop and proceeded to see what I could find out about the two other numbers — zero information available.

On the cover of the file folder was the same logo that was now tatted on my right arm. That night in bed I noticed infrared cameras mounted over the bed, in the bathroom and living room. I had no privacy.

I still had the right to walk out the door anytime I wanted — how far I would get would be a different story. On the bed stand was a reminder to charge my leg tracking device at least two hours a day. During the night I hear a tone on my cell phone indicating a message. including a 10-second shot of two guys working over my campmate’s face while he was restrained in a chair. How’s that for intimidation?

So for the rest of the night I was wide awake, laying there watching the light blink on ankle tracker.

The next morning after a long shower I had to prepare for a zoom call for work and had a couple of phone messages to return for business orders. Now I had a log to complete listing the calls I made and the reason.

At 1 p.m. I had just finished up work issues and the lock was activated on the door. It was the PO “checking in on my leg device.” He said he had an alarm message that it was tampered with, all bogus, but an excuse for him to barge in and check on things. He also reminded me I was to be available 24 hours a day, and not stray more than 5 miles from the apartment.

The rest of the day was quiet, and I was ready for bed by 10 p.m. Sometime during the night at approximately 2 a.m. a pillowcase was drawn over my head, my arms were pulled back and cuffed, legs spread and held to the sides of the bed. I did not recognize any of the voices. One guy did say something about the new leg tatt. My tee shirt and shorts were cut off, and I could hear zippers being opened. Something cold and medicinal was shoved up my ass, and then I was gang banged.

The pillowcase was not removed, and I did not recognize the voices. They had to be there at least an hour, and then it was over, the cuffs were removed, and I was left on the bed. In a flash they were gone. I just lay there stunned, obviously this is a group action, and obviously others were probably watching as well from the cameras mounted over the bed. In the morning there was another message on my cell, another brief video clip, with the message to be prepared for a visitor this afternoon.

I am always interested in hearing from any interested readers. Much of this actually happened, but it has also been enhanced. 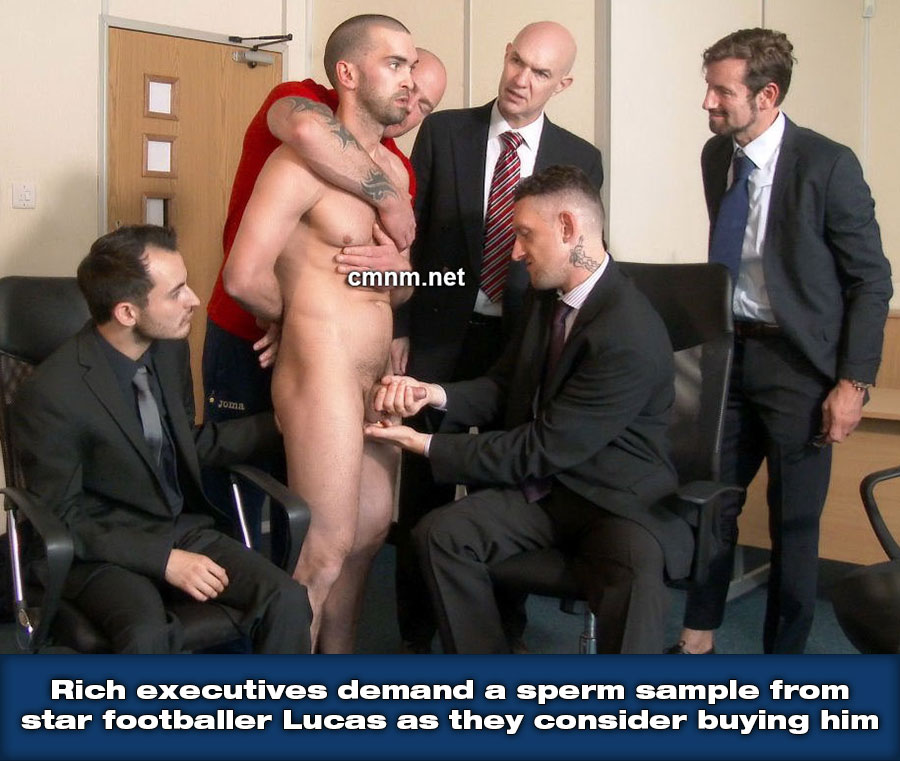