When Jerry arrived at the new house of his keyholder, he didn’t know what to expect. He had been summoned. So there he was, in front of the gate, “the 31st of October at 15h45, not one minute sooner, not one minute later”. He rang the bell, looking through the gate at the gigantic grounds and the almost as gigantic house.

“Stand up and follow me. We’re a bit rushed, but it will make sense soon.”

The keyholder led Jerry to some office. Pretty nice office. Leather club chairs, of course. Wood paneling. Tasteful woolen rugs. Stacked bookshelves. And a nice ebony desk. Jerry was ordered to undress completely. He was soon nude, except for his metal chastity cage. His keyholder gave him heavy leather bindings : wrist cuffs and ankle cuffs. Jerry put them on his body himself. The wrists were fastened together behind Jerry’s back and the ankles only had a short chain between them. Once Jerry was hobbled, his keyholder approached with a mass of leather straps. It was some kind of head harness that he deftly put on Jerry’s head. Some of the straps were tightened to get a good grip on Jerry’s head without hurting him. The keyholder then added a pecker gag, a leather blindfold and heavy duty headphones, all of them held in place with snap buttons. Jerry went blind and mute. For a time, Jerry could only hear the sound of his own body, but with a click, his keyholder’s voice reached his ears.

“You are beautiful, boy. Do you want a souvenir picture? I can take one with your phone.”

Jerry thought about it then nodded.

Jerry obeyed. His hands cuffed behind his back made his pecs stand out. For a time nothing happened.

“It is done, boy. Now, I will lead you to your place for the rest of the day. Let yourself be guided.”

When Jerry was sat, his keyholder removed the chain linking his ankle cuffs and locked each cuff to the legs of the seat. In the same way, Jerry’s arms were freed from his back but bound to the armrests. A heavy leather seat-belt was tightly fastened around his waist. And at last, a padlock joined the leather collar to the back of the seat.

Indeed, Jerry’s cock was getting hard. As hard as was possible in the unforgiving cage. The pain made Jerry try to curl on himself, but he was too tightly bound and could not move. He could only moan in his gag.

For a while, Jerry heard nothing. The headphones were isolating him from the rest of the world. Then he realised he was hearing noises. Moans, actually. Little by little, the sound had arisen and, without knowing since when, Jerry was hearing the sounds of men having sex, sometimes far from him, sometimes as if they were just next to his ears. His horniness increased once more. After a month without a hard dick, after 31 days without release, he went almost crazy.

The vibration started and stopped, coming and going randomly. And nothing else happened to Jerry. Bound, blind, mute, he became lost in a world comprised of his locked dick, his plugged ass and the sound of sex in his ears.

Suddenly everything stopped. Silence in his ears and stillness in his ass. Then a click. And a voice.

“Hello again, boy. And once again, welcome to my new home. I’m so glad you could come today.”

Jerry groaned. He had been summoned ! Only by coming and submitting could he get back the key to his locked cock.

“I know, I did not give you much choice. But it pleases me all the same. Now, enough pleasantries. Let us get to the point. As you know, I moved to this new house. Actually, I gained a lot of money which enabled me to stop working, move here and enjoy some extracurricular activities. To be more precise, I started handiwork and craft. You know the kind : wood work, leather work, metal work. ‘Idle hands are the Devil’s plaything.’ Contrary to idle cocks, obviously.” The voice laughed. “Anyway. Metal work for example is very pleasing. It keeps me warm and it allows me to recycle garbage and rubbish into artworks (or simple ingots). And I bought some cameras to document all of this. It helps looking back at what I did and where I messed up. Very useful to get better and better. … And now you are wondering why I’m telling you this. Well, truth is : I wanted to show you a short movie I did during Locktober. I am pretty proud of myself, If I may say so. So I thought I would show it to you. And what better day than Hallowe’en, the last day of Locktober ? Let us remove your blindfold so that you can watch this movie. I hope that you like horror movie, as this one might frighten you a bit.”

When the blindfold was unsnapped from the head harness, Jerry found himself sitting in a dark room, in front of a large screen. Jerry was sitting in a full home cinema. And he was not alone. Just before him and a bit below, there was a row of seats, every other seat occupied by a man just like him. Jerry turned his head and saw in his own row other men like him, bound and gagged. They were all looking around in the darkness, seeming as surprised as Jerry was. Another click and the voice came back.

The movie had started. Filmed from a first person point of view, it was shown as if the spectator was the person acting. The sound and noises were carried to the ears of the bound men with a very good immersive technology. And the voice of the keyholder started explaining everything.

“I told you about metal recycling, boy. The thing is, I received a lot of small metal parts at the beginning of this month.”

The image of the screen showed a heap of small keys, the kind associated with padlocks, and the hand of the filmmaker going through them.

“I thought all of these were cluttering up, so I decided to recycle them.”

Jerry and the other men saw the hand put all the keys in a kind of pot. And the pot itself was put in an unknown device. It was only when the device was lit that they understood : it was a modern forge.

Jerry moaned and struggled, trying to free himself. Of course, to no avail. If his eyes hadn’t been focused on the screen, he would have seen that many of his fellows were responding the same way. Relentlessly, the movie went on, showing the pile of keys melting in the pot, red and yellow from the heat of the fire. 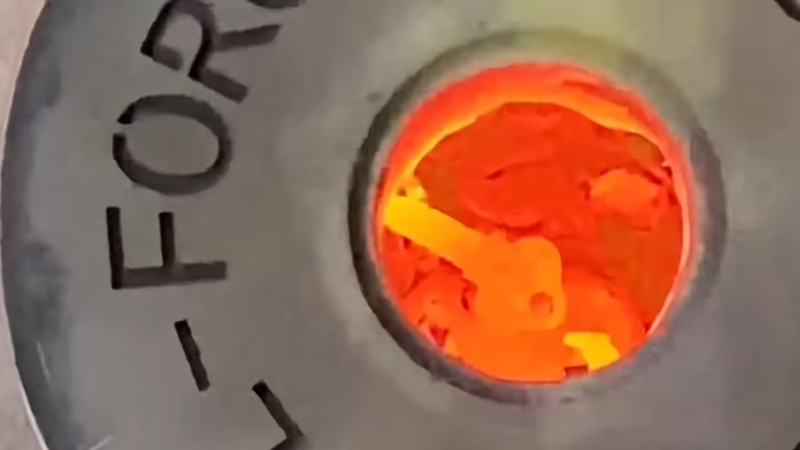 The movie went on. The keys were now no more. Only liquid metal existed. Jerry watched helplessly as the metal was poured in a mold and transformed into an ingot. Pleasing as it was to the eye, it brought no joy to Jerry.

The lights of the room went on and the keyholder went to stand before the screen holding the same ingot.

Jerry heard another click in the phone and looked up. He saw a full dozen of leather men come into the room. Each of them was dressed as the keyholder, in full regalia. And each of them went to one of the bound subs.

Jerry watched the one assigned to him. The dom came and sat on the seat next to Jerry. He took Jerry’s chin in his hand, held it up and smiled at him. And then, he held a key just in front of Jerry’s eyes. Jerry recognised the key. It was his own ! The one he had sent to the keyholder at the beginning of the month. The dom then released Jerry’s chin and used both hands to free the locked cock. Then Jerry himself was released from the seat. And taken by the muscled arms of the dom, to a strong and comforting hug. The dom stood up, carrying Jerry in his arms, against his pecs. Exhausted, Jerry fell asleep in these arms.

When Jerry woke up, he was under a duvet in a very comfortable bed. He was completely naked, no restraint, no harness, no chastity cage. And feeling refreshed and clean as if he had taken a shower. Next to him, lying over the duvet, a leather man was looking at him with fondness.

“I see you have been trained. Now let’s start again, as a human being to another human being, because I really care : do you feel better ?”

“Just a joke. Your keyholder wanted to show you a horror movie for Hallowe’en. He thought that the loss of freedom would mean that to you. But he knew that it would be frightening for all of you, even traumatic for some. So he asked us to help him take care of you afterwards. Will you be all right?”

“A feast has been prepared for all of you. Do you feel well enough to attend?”

“Another choice for you, boy. Do you want the clothes you came with or do you prefer these leather pants?”

The man stood from the bed and went to show a brand new pair of leather pants. Jerry drooled when seeing them.

“Come and get them.”

Jerry stood in turn and walked to the dom. He took the pants and put them on. They were perfectly sized, as if tailored for him. Jerry twisted on himself to see the result. The dom smiled at him.

“Very handsome, boy. Now, are you ready to go?”

“Do you need some time to rest and relax?”

Jerry fell down on his knees, hands together behind his back, head down, eyes on the dom’s boots.

“Please, Sir… I… I would very much like to be brought there as your sub.”

When they entered the dining room, Jerry was one step behind his dom, led by a leash, a collar around his neck. His hands were cuffed behind him, his head was down. He was still wearing the leather pants, but the fly was open so that his caged cock could hang out of it, visible by every man in the room. And Jerry felt at peace.

Metal would like to thank Nephilim for this story. 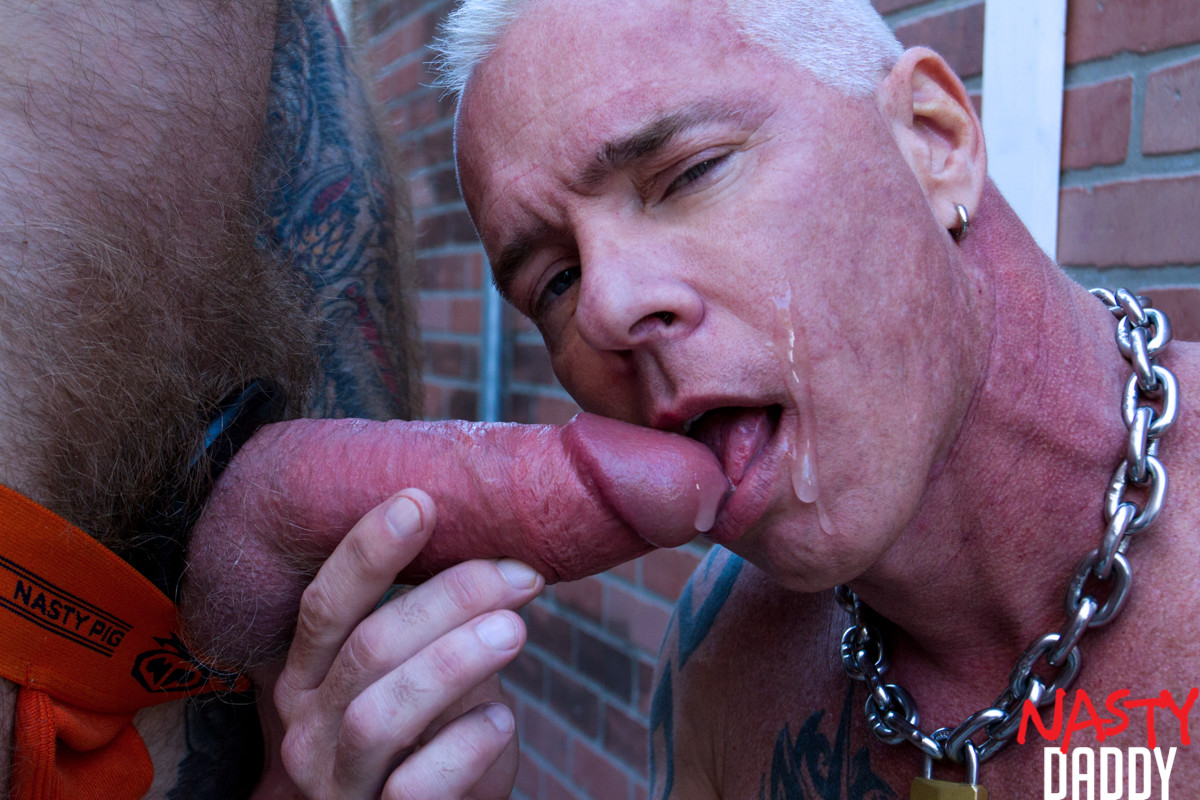