“Very good, boy,” I said as I shoved my tongue down his throat and spent a while making out with him. That grunt response shows me that this is exactly where he needs and wants to be.

I pull my tongue reluctantly out of his mouth and stand up. It’s really starting to get late, and we both will have to work in the morning. I start releasing the restraints from the chair and helping him stand up. It’s a little harder than he expected, since he can’t see and is trying to keep his balance.

I step behind him and unlock and remove the posture collar. Then I start unlacing the hood, grinding my hardening cock against his ass while I do so. He pushes back against me and groans deep in his chest.

“Not tonight, greedy pig. There will be plenty of time for that soon enough. Now you need to get some rest.” I keep unlacing the hood, so now it can slide off easily. I step back around the front of him because I want to see that face as I pull the hood the rest of the way off. I pull the hood off slowly, admiring the sweat that has built up on his face and his closely cropped hair. As soon as the hood passes his eyes, they slam shut tightly from being in the dark for so long.

He slowly starts to open his eyes as they adjust to the dim light of the playroom. As he slowly opens his eyes he stares right into mine, and I puff my chest out, knowing that he is now mine.

“You did really well tonight, boy,” I said as I stare back at him. “You know I’m going to really push you hard, don’t you?”

“Oh really now? Enjoying the lack of speech, are you?” I say as I nearly get light headed from how fast my cock goes to full mast.

He never breaks eye contact with me as I reach down and run the tip of my finger across the piss slit of the steel chastity tube and pull my finger back covered in precum. I hold the finger up to his lips, and he immediately opens his mouth and cleans it.

“I’ll take that as a resounding ‘Yes’ my pig, and I am very glad to hear that. I know that it is starting to get late in the evening, and you are going to need some rest before work tomorrow. It is almost 9 o’clock now, so it’s been almost 13 hours since you’ve had that weight locked on.”

I reach down and start slowly rubbing my hand over his stretched balls as I talk. “You see how hard this control is making me?”

I reach down and wipe my own piss slit and take a long thread of precum to his lips. As he is sucking on it, I keep talking. “You’re not ready for that weight to come off, are you?”

“You’re ready for me to make it a little harder to deal with, aren’t you?” I say as I’m applying slow pressure to his balls.

There is a short delay as he processes it in his mind, but then I hear it.

“That’s a really good pig. I’ve got something very special for you then.” I kneel down and start unscrewing the bolts from the 2-inch ball stretcher. As soon as the two halves come apart he groans loudly, but then just gives me the most pitiful look like I just took away his favorite toy. “Don’t worry, just wait and see.” I say as I start rubbing his balls. I reach behind me and I grab a 2.25-inch ball weight and start pulling his balls down low in their sack and line up the two halves to the weight. As soon as they line up I start screwing in the bolts. He groans deep in his throat, but never once reaches toward his balls to cover himself up. When the bolts are screwed in completely I wrap a piece of tape all the way around the weight and stand up.

“Does that hurt even better now, pig?” I say as I start rubbing his sensitive nipples and making his eyes roll back in his head.

“I’ve wrapped a special piece of tape around the entire weight. If you attempt to remove it then I will know, and you will not enjoy the consequences. You will be wearing this weight for a while as your nuts start to stretch lower. Is that clear?”

“Good pig, now get dressed. You’re going to need your sleep tonight. And clearly you have some new hardware to adjust to,” I say with an evil grin.

Before a split second even passes, he drops to his knees at my feet and swallows my cock down his throat all the way to the base in one move. Who am I to say no? I just take a small step back and lower myself down into my chair and he follows me every inch of the way, never taking his lips off my base. I sit back in the chair and relax as he starts moving up and down the shaft slowly and methodically, massaging it with his tongue as he goes. Oh, this faggot is good at what he does.

He keeps bobbing up and down a few times and then he goes all the way to the base again and looks up at me and suddenly tightens his throat and forces himself to gag. I immediately throb in his throat and he forces himself to do it again. I groan loudly every time, and he just keeps going seeing how much I like it. Each time he does I throb into the back of his throat, and I know I’m not going to last long at this pace at all. He forces himself to gag again really hard, and this time a huge wad of throat slime comes up and down my cock. He looks me right in the eyes as he reaches up and scoops it up with his hand and rubs the slime back on his face. Immediately seeing this, I give a deep primal growl and I start to blast down his throat. He keeps sucking through my orgasm, greedily taking all of it. After I come down from my orgasm he is still balls deep on my meat, and I know exactly what he is needing. I relax my muscles and start to fill him with my fresh piss that always comes right after I shoot.

“Still not wanting to speak, I see? Enjoying that, are you?”

“Good, then when in this room you will not speak unless absolutely necessary and with a clear instruction from me to do so. Is that clear?”

He bends down and picks up his clothes, showing me the muscular ass that he is packing as he does so. That ass that now belongs to me.

I step up behind him as he stands up and wrap my arm around his throat from behind, applying pressure with my bicep and forearm with his adams apple cradled safely in the crook of my elbow.

I lean in close and start talking right in his ear very quietly.

“Listen closely, my boy. This is not going to be easy on you. There’s definitely going to be times where I am pushing you beyond what you think you can handle. There will be times where you may want to quit.” As I talk I start applying steadily increasing pressure to his neck, feeling him start to get heavier. “Keep this in mind, that no matter how much you hurt, no harm will come to you. Do you understand?”

“Good boy,” I say just as I release his throat and catch him on his way down. I reach down and feel a 6-inch long thread of precum leaking out of the front of the chastity tube. This time I lean down and I lick the thread up myself, causing him to groan as he sees me do this.

We walk forward toward the door of my playroom and out into the hall. As soon as we exit the room, he immediately drops to his knees again with his head bowed and nuzzles my crotch. He looks up and meets my eyes and I just say one word:

“Thank you very much, SIR!” he shouts almost like a marine during basic training.

“You are most welcome, boy, and thank you also,” I say with a huge smile. “Now stand up and get dressed.”

We walk to the living room, and I sit down in my recliner and enjoy the sight of this ripped muscle boy get dressed back into his sweaty gym clothes still damp from our workout earlier. As soon as he is fully dressed again he kneels at my feet once again with his face buried in my crotch, inhaling deeply. I reach down and rub the back of his head, knowing that I have to get him out of here before I get hard again or neither of us will be making it to work tomorrow.

“Time for you to go home and get some sleep, boy.”

“Now you will go home and get some sleep. If there is something specific you need to do, then don’t worry, you will know. Tomorrow morning you will go to work and will meet me at the gym after work. Since it is Friday, and I already know you have a free weekend anyway, after the gym you will spend the weekend here with me, boy.”

He gets a full body shudder, but he never breaks eye contact. Then he stands at a full attention and shouts:

I step forward and my lips meet his. My greedy tongue slides through the opening and down his throat, his tongue massaging mine from underneath. I feel the precum from his chastity cage making a wet spot on the front of his gym shorts pressed against my leg. I reach behind him and my index finger slides down the back of his shorts and expertly finds his pucker and starts to slide in slowly. He groans as my tongue and finger both violate him and he becomes putty in my hands, which isn’t really hard to do apparently.

In one motion I pull out of his hole and his mouth and he whimpers like a puppy.

“Goodnight, pig. You are going to need some rest, I can assure you. By the way. Don’t forget that jock for the gym tomorrow,” I say as I reach over and open the front door.

“Goodnight, SIR,” he says, kneeling and licking the toe cap on each of my boots before standing and walking to his car.

I close the door behind him and watch him through the window until he gets in his car and drives away. I’ve been wanting this for so long, and now it’s happened. Hard to believe how fast it happened, but its been a long time coming.

Fuck, I should have drained my bladder in him before he left. I hate to waste this load that has built up …

This story is a work of fiction written by Nitro. This story has been cross-posted to different locations by the author. 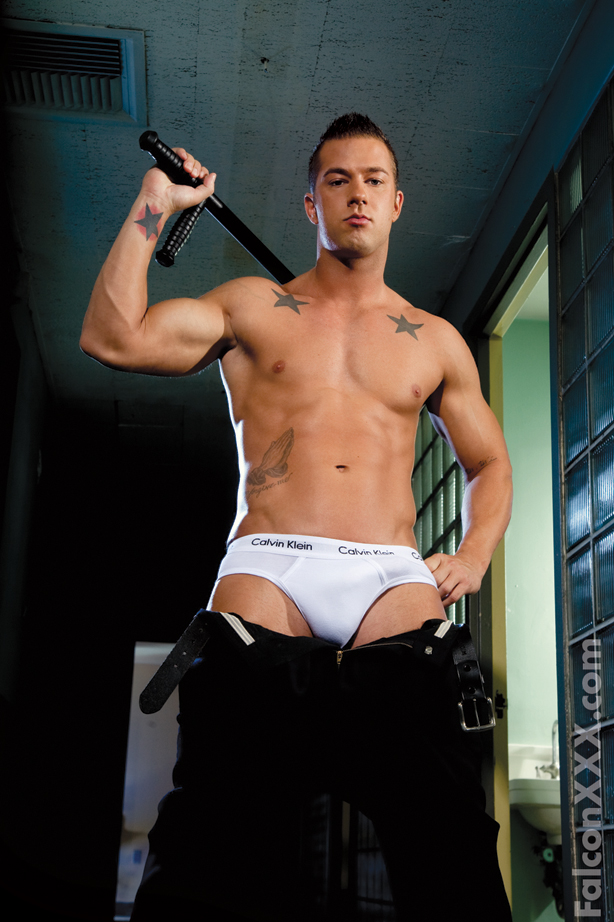