Chapter 20: Stallion A, Meet Stallion B

The slap in front of me was what I’d call an old guy.  Forty years old, maybe–but he looked older and younger at the same time.  His face was sort of weathered and there were scars on it, like his tools had hit him a few times—not too bad though.  Actually good, if you know what I mean.  But what I mean about young . . . .  He wasn’t one of those slaps that always manages to get issued issued a suit of browns that are a little too small for its Giant Bulging Muscles.  His browns were sorta loose and baggy, but you could tell from the way they fell off his pecs and his arms and his thighs that he definitely had things under control in the physical department.  So that was interesting!  But what was really young about him was just the way he was standing in the stall, leaning one arm on the upper rack, like he was saying, OK, whatever, I’m here, so what?

So what can I say?  He was fuckin made for that stall, and that fuckin stall was made for him.  Question was, how well was I gonna fit in?

Which he did.  He showed me how I needed to stow my browns and line up my boots so they’d be outta the way at night, and exactly the right way to use the toilet and the pipe and clean up afterwards.

“You gettin thee upper rack,” he said, and I said, “course,” cuz naturally the new slap would always get the worst rack.  Then he went through the whole routine about chow and lockups and “punishment drill—you gotta be ready for it, cuz evrybody gettin it.  Thee paddle, thee pillory.  You gotta be ready.”

“What detail did they give you?” he asked.

“That’s good.  Probly why you in this stall.  We got thee same detail.”

He told me a little bit about that.  He said it was “dirty” and it “can get hard sometime.  Mr. Sharma want evrything perfect.  But no worries, I show you how.”  Pretty obvious that he liked his detail.  And I was starting to like him.  I already liked the way he looked.  Then the “no worries, I show you” part–that really got to me.  I don’t think anybody else ever said that to me before.  Not just that way.

Then it was time for chow and an orderly came by and unlocked us and we went down the line to a big room that looked like a pen, and that’s what they called it, the Pen, where there were tables and stools and you could hang for a while after chow and chat or gamble or whatever, and he started tellin me different things about the different slaps, like which ones to look out for and which ones were solid, and he introduced me to some solid ones.  “Hey Jolt, sup.”  “Glad to be meetin ya Jolt.”  And yeah, you already guessed—all the time I was gettin hard about this beautiful stallmate I got.

Of course, you know what I wanted to do, but the dude never laid a hand on me, which I thought maybe he would after they locked us in for the night.  But he never did.  Next day, I was gettin hard again, just standing up next to him while we waited for somebody to unlock our stall.  Then marching out to the gardens, shoulder to shoulder, and working beside him all day . . . .  He was showing me how to use all the tools and so on, which was good because when I’d used some of those things before, I’d done it like I was Frankenstein—I mean the monster, not the doctor, although probably the doc would’ve done even worse.  I’m surprised I didn’t slice my hand off, there at the start.  Or crush a couple of feet under a load of gravel or something.  Because you aren’t out there just “la-de-da, I love working in my garden”; you’re out there doin grunt work, hour after hour, and it’s gotta be perfect, or as close to perfect as a grunt can get it, lol!  So you can really get rattled when you’re startin off.  I didn’t know anything about trees or plants or any of those tropical things.  I didn’t care about them, either, if you know what I mean, but I started to care because Toby was showing it all and explaining what you can do with it and what you can’t.

Everybody seemed to get along with Toby, even the bad guys, pretty much.  One reason–he was really strong and fit.  I know I wouldn’t want to tangle with him.  He had, like 25 pounds on me, and despite his age, his wind was really great.  And once he got into somethin, he stayed in it, you know?  As far as bad guys—a lot of them weren’t actually very good at being that way.  Maybe they weren’t tough enough.  They looked like they were, but you didn’t see a lotta action.  Toby wasn’t like that.  One day we were on our labor detail and I looked around—where’s Toby?  Then I saw, he was out behind some bushes, beatin on some slap that he’d had some trouble with.  He wouldn’t tell me what it was, so I guessed it was somethin about me.  But I don’t know.  I do know that he told me, “You gotta do that stuff so you doan leave any marks mon.”  But if Toby wanted to steal somethin for our stall, he definitely knew how to do it.  He showed me lots of things about that.  So we were eatin a lot better than we shoulda been!  What he said was, “You can do a lotta things if you doan mind bein punished.”

Which is a good time to tell this story that I’m about to tell.  A while after they put me in the stalls, Toby and me were out on the big yard doin some edging—not, not that kind, the kind you do next to a sidewalk!—and we didn’t see Mr. Sharma comin along the path.  Which maybe you could miss, cuz he walks real quiet, and Toby and me were both bent over, workin.  And right then Toby flipped some dirt up and it almost hit Mr. Sharma on the foot.  Oh shit!  At first all I saw was the dirt on the walk, and the civilian footwear next to it, but then I saw whose foot it was.  I did what Toby taught me—as soon as you see the Owner, you stand at attention and freeze.  Hands behind your back, eyes on the deck, don’t make a sound.  Toby saw me doin it, so he got up and did it too, and we were both standing there, totally frozen.  Then Mr. Sharma says to Toby, calm and even, “Grab your knees,” and he says to one of the slaps that were with him—cuz he always has a boss or a couple of his special slaps with him when he’s out in the yard, and they always have a paddle with them somewhere—“give him ten.”

So the slap, who was this big ugly guy named Champ, laid into Toby and paddled him ten times, hard, and then Mr. Sharma walked away, and the other slap, who looked a lot like the first one, just as big and just as ugly, so his name was Chimp, turned around and said in this growly voice, “Back to work.”  So they all left, and Toby straightened up and went back to work.  But I could see there was something in his eye, like he was crying a little bit, just from the pain, and I sorta felt like crying too!  One time Toby said I was “a cryer,” and I guess he was right.  But anyway, that was it, we just started in workin again.  Although Toby had trouble sittin down at chow and slept on his side that night, lol!  But that afternoon, I mean right after he got the paddle, while he was still sorta cryin, I kept lookin at his shorts, and dude! he had this huge hardon!  And so did I!  That’s what I mean when I say, you learn a lot when you’re a slappie.

The first time I got paddled, which was a little bit later, but so what, that isn’t important for the story, it was for gettin mouthy to one of the bosses, which was true, and I was definitely cryin– but no hardon.  And Toby was right there, but all that was goin on with him was what he said afterwards: “Sorry they hurt you.  You’ll get over it.”  It sounded pretty cold, from somebody that was your stallmate and everything, but when I thought about it—after my butt stopped aching!—I asked myself, do you actually want somebody that tells you, “Oh Joel, I am SO sorry! Where does it hurt?”  Jus make you weak mon.

But Toby’s attitude was always, like, no matter what you’re doin, it’s gotta be “squared away.”  One of his favorite expressions.  He’d tell me in the morning if my rack wasn’t “squared away,” and then I’d have to “fix it.”  His own rack was always squared away.  And even with crime–his stash would always be “squared away” too.  Pretty soon I was sayin it, and I was, like, proud to be squared away.  My tools were always in the right place, and I always got ALL the dirt off my boots, and if a boss came by to inspect me, I was always straight up and browns all smooth and boots all pointing forward and the best distance between.  So that’s what I got from Toby.  Which maybe I had anyway, but he’s the one that really got it out of me.

Toby didn’t talk much about where he came from or how he got to the stall.  I was the one that did all the talking!  I told him all the stuff I told you.  Almost all of it.  Not the part about him.  He just listened, and sometimes he asked a question.  Of course, I was always wanting to say something at the end of these long rants, like, “and that’s why I’m so happy to be here with you!”  But I didn’t dare, because I didn’t want to fuck things up just when everything was so great for me—I knew what I was and what I was doing, and I was like, so proud when everybody was sittin around after chow and chattin or whatever, and I was in my browns like everybody else, and Toby was sittin beside me, and he could’ve been a boss but it seemed like he’d rather just be gettin along day by day, like I was, so it was all good . . . .  And maybe if he was telling the story, he’d say it was better than good, it was perfect, having a stallmate like Jolt!  Lol!  But where could he get something better than me? 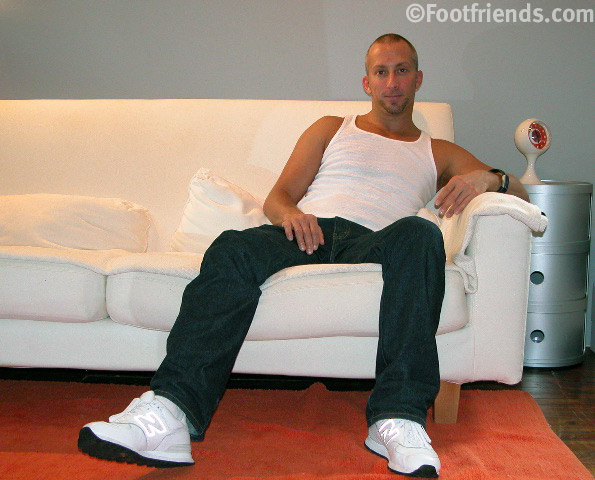