Oh fuck, indeed. This man whose boots I was licking was my business partner’s son? How the hell did that happen? When did he grow up? And how fucking hot is he? I had not seen him since he was a kid, and now that kid would be walking me? Damn. Again, how did this all happen?

As those thoughts swirled in my head, I realized that he had attached a leash to my collar and said, “Let’s go, boy.” As we started to walk into and around the woods, he reminded me that he believed that no dog should ever talk and that during our walks, which were scheduled for an hour each day this week, I would be rapidly punished if I said a word. However, that did not mean that he could not talk and, fuck, did he ever.

He discussed how hot he found it that he was able to walk a man like me and to help in me finding my proper place in life. He said that he and Todd met a year or two ago when he was owned by his first Master, a retired military captain, who wanted him to be further trained which is how he was introduced to Todd, who employed him to walk the dog he had been training at that time. He told me he didn’t like that dog, as he was a “twink with no soul that thought puppies should yap and wear clip on tails” but that he really enjoyed it later when “that twink was in all ways a dog never to even stand again,” but a job was a job, though he was much happier with me now.

This went on to a point where I was happy I couldn’t say anything because I didn’t have to pretend to even be listening, which, to me was a sign I was adapting to this mindset because I had no care in the world about what he was saying, caring only about my gait and my tail as most dogs do. That said, the one thing that was very clear is that he did not have a clue who I was and, apparently, he didn’t even care as, to him, I will always just be another man on a leash who was being transformed to meet the desires of his Master.

When we got back to the house, he walked me to the door, re-attached the chain running from the middle of the back yard and told me to be a good dog and that “Master Todd” would be back in about four hours. I had no idea how not to be a good dog at this point, so I went into the kitchen, drank some water and had a “treat” but went outside and went to bed, after I explored a very interesting patch of clover – again, wtf?

It was starting to get dark when Todd drove up the driveway and got out of his truck, walked past me saying “hey dog” and then went directly into the house. I have to say, being acknowledged yet ignored SHOULD have bothered me, but every single time he did that my dick filled the steel tube with rapid intensity.

It was maybe 45 minutes later when he came outside, clipped my leash and took me for a walk. I was hungry and he sensed that, but he told me that this walk was important. He was carrying a soccer ball, which intrigued me, but not knowing if I could talk now or not I decided to be quiet. This time was different because he unclipped me from my chain, however this time he didn’t attach a leash. He started walking, and I followed just like a good dog would. When we reached the clear area, he stopped and said that I had been on fours too long for my health and that I needed some time on twos to balance, make my muscles move and have blood flow better. He unclipped the bindings, removed my mitts and told me to stand. This one simple act was painful as I had gotten used to the new shortened me, but then he kicked the ball and told me to run get it and then lead it back to him. I chased each throw and the movement was fabulous, though running around upright, collared, hooded and naked in a field was not something I ever planned to do!

After about 30 minutes of this, he told me it was time to go home and put the paws and leash back on me for the all-fours walkies, but he left the hood off. He said that tonight I was going to have a new, unexpected challenge and then asked me about how I liked Cody. The very first thing that came out of my mouth was to ask him if he knew who Cody was and he laughed and said, “of course I do.” He said that he loved the fact that for the rest of my career that I would look at my business colleague and think about the fact that his son had walked me naked on a leash. I wanted to die, but secretly loved this fact. As we got back to the house he said that the unexpected was that Alan had texted and I had a client who was insisting on talking to me about his investment and was furious that I had not returned his calls, so I needed to be a businessman again, just for a bit. I assumed Todd was going to take my gear off and let me have my laptop and phone, but instead he laid a printout of the issue on the table, told me to read it and let him know when I was ready, and he left me in full dog mode as he placed the speakerphone in front of me and dialed my client. Still locked into the paws, I could not take notes, so Todd sat at the table ready to write when and if I needed it. I didn’t know how to feel about this as my worlds were colliding, but Todd soon dialed the number and I had no choice.

The call was short, clipped and my arrogant client was able to yell and me and then back off and allow me to solve the problem. Todd, who had obviously listened, said I handled it well and nobody listening would have ever known I had been transformed into a dog. We soon ate dinner and, when I thought it would be time to be sent down to my cage Todd said that one of my new routines is having a lack of routine and that on nights like tonight Alan may want to fuck or watch me get fucked so I needed to learn to adjust. He told me to walk into the den and get myself aligned to the metal contraption that locked me on fours and that I was going to spend the next three hours on the fuck machine when not being fucked my him or his guest.

His guest? What? He says things like this from time to time to just throw me, and surely that was all it was because he had also not put my hood back on me. I “walked” into the room, lined myself up and Todd locked me into the stocks and removed my tail, and a new, larger dildo began to slowly go in and out of my ass at a pace that left me crying for more speed. Todd sat down to watch TV and I stayed in my mind a bit thinking about how that call did not cause me to spiral into work worry like I would have just two weeks ago. I was quite proud of myself, actually, and had started really getting into the machine’s slow pace when suddenly there was a knock on the door. Todd walked to the door, stepped outside for a few minutes and then appeared again holding a leash with a naked man on two legs in the shadows. As he walked in he said, “James, you remember Cody don’t you?”

I was a bit shocked but even more so when Cody said, “Uncle James?”

Metal would like to thank Thunder for this story! 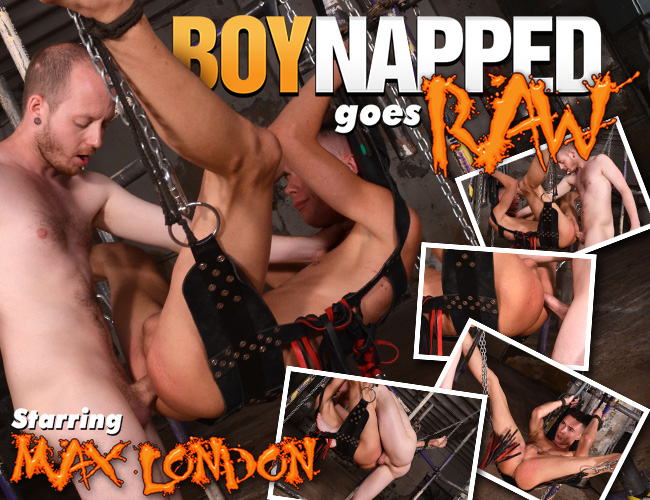