This is a true story from my college years when I was closeted and had joined a fraternity.

I decided to spend the night with my pledge brother, Chris Thompson. It was after an evening of partying at the frat house and his apartment was walking distance. I didn’t want to drive home drunk, but mostly it was mostly excuse to get him alone. I was curious about Chris ever since I heard the rumors from the other members of our pledge class. The story was, Chris was gay. What threw me off though was his persona. Chris was a recent Army discharge and he was a muscular, hyper masculine meathead.

I felt like he didn’t fit the stereotype, but then again neither did I. Was he a closet case like me?

At his apartment, we started to drink more beers from his refrigerator. We kicked off our shoes and watched UFC on the couch. I could smell the warm scent of his socked feet. Smelly socks were a big turn on for me! It was an aphrodisiac.

I was drunk enough to be bold yet sober enough to be manipulative at the same time. I wanted to see what I could start with him.

It began with some comments about his socked feet. I said how smelly they were, and I leaned in to take a whiff. We were seated on the couch. He said something about having worked all day in those shoes and socks at his UPS job and we wore for several days.

I mockingly said, “Poor Thompson had to work,” as I rubbed his feet a little.

“That feels nice, bro. You can continue,” he laughed taking a swig of his beer.

I didn’t hesitate to follow up with more massaging of his feet. As I dug in to them, his sticky sweat was coating my fingers.

Another one of my kinks was bondage. I had played tie-up games with my best friend since childhood and found it an avenue for intimacy with other guys.

I worked in a conversation about escape challenges, and who could get untied the fastest. To my delight, he was easily enthusiastic to the idea.

At my suggestion, he agreed to be tied up first. Chris didn’t have any rope, but we improvised. We pulled out some belts from his closet and some extension cords from his kitchen drawer.

I put him in to a hogtie, using a belt to restrain his wrists behind his back, a belt to bind his ankles, and an extension cord to tie the two together. I intentionally didn’t make the knots too tight because I wanted him to easily escape. His bondage was merely a precursor to mine.

I wasn’t finished, though. I returned to his kitchen where I had seen a large roll of duct tape. I yanked off one of my sweaty socks and tried to shove it in his mouth. Chris definitely didn’t expect that and spit it out in protest.

“Don’t put that fucking thing in my mouth!” he warned. I could tell he was serious about it, so I backed off. Truthfully, I had an agenda trying to gag him with my dirty sock. I wanted to see if he would try the same thing on me.

Unfazed though, I gagged him with duct tape, which he didn’t seem to mind as much. I wrapped several layers around the lower half of his face. “Mmmphhh!” he mumbled.

“Ok. You have ten minutes to get out,” I told him. “You’re just lucky I didn’t tape put my sock in your mouth. Now THAT would be torture!” Again, I was planting a devious seed.

Within a minute or two, Chris was breaking free. Easily in under five minutes, he was out of his ropes. He freed himself and yanked off the duct tape.

Before we tied me up, we both took a leak in his bathroom. The beers were getting to us. I figured this was smart because who knew how long I was going to be tied up afterwards.

When we returned to his living room, I told my pledge brother to not hold back and do his best.

Well, he did. It turned out, for whatever reason, Chris seemed to know a thing or two about tying someone up. His bondage work on me was pretty extreme. He made good use of the belts and extension cord. He even used some of the duct tape to wrap around my bindings so the knots wouldn’t be that accessible!

He was about to wrap my mouth with the duct tape when I boldly suggested an addition to my gag.

“Are you going to gag me with your socks?” I smiled up at him, rolling around in my hogtie.

“Oh, you want that, huh?” he laughed looking down at me.

“I get it, you little freak. You have a sock fetish, don’t you?” he exclaimed, slapping me around in the face. “DON’T YOU!”

Not wanting to admit it, I instead said, “For the fun of it. The torture. More incentive, right?”

Chris seemed all too eager and peeled off his black ankle socks, taking a whiff of them. Then he did something unexpected. He wiped them under his armpits for a few seconds.

“Open up, brother!” he laughed as he shoved his pair of nasty, armpit sweat-coated socks into my mouth.

I accepted them without a fight, letting the stinky footies sink past my lips, deep into my mouth.

As Chris started duct taping my face, forcing his socks to stay gagged in my mouth, he said, “You’re a kinky little fuck!”

Once I was bound and gagged, Chris delighted in tickling me everywhere he could. I broke out into a fit of muffled laughter, enjoying the attention as I was hogtied beneath him.

Chris tickled me for several minutes while I squirmed helplessly on the ground unable to fend off his attacks. I was loving it. In fact, I was starting to get an erection that was, for the time being, mostly camouflaged by my blue jeans and underwear.

He went back to watching UFC on the TV while he periodically assaulted me with tickles, pokes and prods. I pretended to hate every minute of it, but the truth was I loved it.

At one point, he had turned me to my side, which now put me in a precarious situation. My huge boner was causing a bulge in my pants that was now obvious to him. He didn’t say anything about it, though. Instead, he started to tickle me mercilessly in the inner thighs of my legs dangerously close to my crotch, which only made me harder.

I was breaking out in a sweat, and my face was turning beat red, all horned up and unable to stop his advances. Meanwhile, I was trying to get untied but genuinely unable to break out of the restraints. He did a first class job tying me up!

Chris eventually wound down from his attacks and talked about going to bed. When he asked if I wanted to be untied, I responded back by shaking my head no.

He picked me up and carried me upstairs to his loft bedroom. Chris placed me on his bed and went about preparing for bed. While he brushed his teeth and stripped out of his clothes, I struggled around on top of his sheets feeling so excited. I was even pre-cumming a little.

My super-hot pledge brother come back to his bed, only wearing his underwear so I could admire his fit, smooth body, as he climbed under the sheets next to me.

He was ultimately worried about me suffocating in the middle of the night so Chris unwrapped the duct tape over my face and gave me permission to spit out his dirty socks.

I spent the night tied up next to him, falling asleep with one of his arms casually draped over me, and his armpit so close to my face I was treated to its wonderful aroma. Periodically through the night as well, I would be awakened by the “casual” brush of his hand over my crotch, sometimes even grasping my nut sack through my jeans. This sent shocks of joy through my body and my heart racing. It was pretty hard to get a good night’s sleep with all that teasing.

When morning came around, and we were sobered up, Chris released me from the restraints. I was riddled with rope burn everywhere, but he helped massage my wrists and ankles silently.

With no words exchanged about what happened last night, we said our goodbyes.

Metal would like to thank SockgaggedJason for sharing this story! Please leave a message in the comments section below! 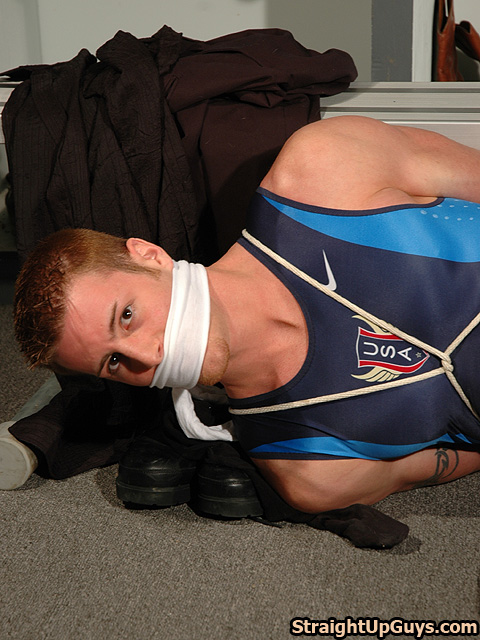 One thought on “My Night at Pledge Brother Chris’ Apartment”