It was day 314, and James was due for a pleasure session, having skipped the one due on day 284 because of Russell’s work with the director. What this session entailed, he did not know, apart from the fact that it will most definitely not involve any sort of sexual release.

There was no reason to believe today was any different, then. Spiritual pleasure, as opposed to physical pleasure it was.

Russell started off the day very standardly, helping James out of his fist mitts, allowing him to brush his teeth and lather on sunscreen for what would be a morning workout after a drink of a protein shake and more water. However, where normally his mitts would not come back on until after lunch, new ones came back on before he even left the cell in his typical attire of a blindfold, bit gag, collar and leash.

James was led to the sand track on all fours, to the place where he had walked laps pulling a rickshaw for most of the past year. There, his blindfold and gag were removed in the infield – as opposed to in the shade per the normal routine, and his hypersensitive eyes were assaulted by the desert sun.

Eventually, as he blinked away the tears and had his pupils acclimate to this extremely bright environment, he noticed Russell holding his leash in one hand and holding a dog toy, shaped like a bone, in the other.

“Today we’re gonna have some fun!”

James jumped and barked in response.

“Hand,” Russell said as he held out his palm for James to put his hand – or more fittingly, paw – on.

Russell would throw his bone out into the distance, sometimes having James stay before he was allowed to run to it and carry it back with the bone between his teeth. On occasion, Russell would pull a prank and throw the bone straight up after feigning to throw it in a more horizontal trajectory, and James would have a light slap on his ass if he fell for it.

The pair – master and pet slave – ran round and round the sandy infield, laughing and hooting at a most simplistic game of fetch.

The rest of the day was no less special than the session in the morning. Russell decided that for just this day, James would lose all his bodily functions other than pissing and shitting. He would remain blindfolded, have his hands mitted, and gagged whenever possible and safe until the next day.

Obviously, this meant James was rather restricted in what he was able to do. He relied on Russell to feed him his food, to guide him to the toilet, and to help him work out (he could only do weight training, and even then had real difficulties just getting onto the equipment).

Submissive training was made more difficult than usual, as he was hogtied and put in a cage. Even the leash around his neck was tied to a bar to force it to stay still. In this way, he may entirely keep his mind on his master.

In absolute darkness and enforced stillness, James drooled into his beard and reflected on the day.

True, it was infuriating to not even be able to eat his own food, or direct himself to the toilet, but he loved it. All this meant he had to rely on his master, really get the level of trust up, and so he did.

He just had to keep in mind that his master will always protect him and keep his best interests at heart. Even now, as his entire body ached in this cramped cage, unable to even twitch.

Sincerely, he thanked his master, Russell, silently, who he knew was watching over him and giving him this surprisingly rare calm moment to reflect and meditate. 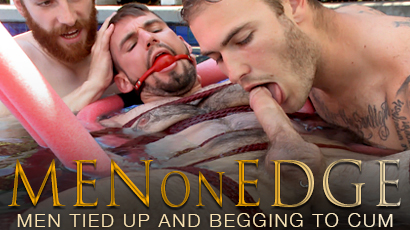