“Changed some stuff according to your comments,” Matt said as he drove Luke, who was deep in contemplation.

Luke met Matt in high school, and Matt was clearly a man of dreams, often big dreams, and too often pipe dreams. Naturally, he did not think he would return for another test.

That said, now that they were both 30, things were very different; Matt knew what he was doing.

Matt operated out of a house in an unstable environment. Situated in an area just between the high and mighty glass and steel skyscrapers and the crime-infested slums, nicknamed “The Twilight Band, the house had once belonged to two prestigious gang members, and most recently an infamously far-gone drug addict and smuggler on the side, who sold the house for cheap in order to sate his endless want for amphetamines and cocaine.

However, it was also this crossroads nature of the house that enabled Matt to work freely. Luke – who gets more tips if he strips naked by working as a trainer in a reputable gym he partly owned with a formal reception 102 storeys above ground level – could as easily visit the Band as a gang boss who threatened to kill their trainer because they “taught him wrong,” all without drawing attention.

As long as Matt did not order too much too quickly, he could even purchase semi-legal parts and code without getting scrutiny. While on their own, equipment such as neural interfacing headsets, large extractor fans, and extremely powerful computer parts are completely legal, it does get suspicious when these items appear consecutively on a shopping list.

Matt also made a lot of friends. Useful friends. His list of friends had grown quite venerably; city-level politicians, famous investors who wrote bestseller financial advice books, and top minds in the disciplines of engineering and neurosciences, all of whom could (secretly) back him in one way or another.

Luke feels slightly ashamed of this; the most exciting people who message him are nameless businessmen who order off the hidden menu – “private lessons” at double the usual hourly rate for “exclusive full coverage,” which paradoxically translates to “full nudity.”

“Also – you’re gonna love this – you’re seeing the final iteration of the UX! I’ve gotten rid of the whole UI for full immersion!”

The car ride was faster than Luke had anticipated. They were getting parked just as he was coming to his senses.

“So, today, we’re testing if we could use additional props. Let’s start with chastity.”

“I saved up for today though…”

“Even better!” Matt cheered. All of a sudden, his voice adopted an annoyingly posh and oldfashioned villain’s tone. “Oh, the realism…the immersion!”

…and back to normal, as Matt began stripping Luke naked and started to cuff him to the modified recliner.

Luke protested, to both the bondage and the chastity, but acquiesced as Matt threatened to boot him out of testing and berated him with matters of safety.

“Okay, first up, you were thrashing around last time, really can’t let the interface break. I put specific control circuits in the headsets that can ease you out of the simulations, but if those fail, your implant gets fried.

“Best case, you change your implant; worst case, you forget what reality is. You lose all your memories. Or something shorts and there’s thirty-something people mourning you because you died painfully with your brain burnt up.”

A shiver went down Luke’s spine. If that was the fate bondage would save him from, then bring it on, use another 20 straps and he would not complain a word.

“Besides,” Matt teased, more light-heartedly, as he rubbed a drop of Luke’s own precum on his beard, “explain this if you don’t like it.”

“Your name is Bruno, a slave used as a window display, prostitute, dancer, and backup labour at a club.

“Your safeword is ‘Deliverance.’

Bruno was completely naked as he struggled to stay still in his hogtie, having been placed face down on a low table in a VIP lounge. Despite his impressive musculature that could probably win him a few competitions, his owner harboured no sympathy for his reduced limb dexterity as he poured himself another drink while using his slave as a foot warmer.

Bruno estimated that he could hold this strict hogtie for another few minutes at most.

As his muscles ached terribly, he tried his utmost to breathe in a regular rhythm despite the ball gag in his mouth, and his immense body weight resting on his front.

“Yeh-her,” Bruno squeaked as he tried to say “yes Sir.”

It took a while, but eventually, Bruno was out of the punishing bondage bar the gag, and per his training, stood straight with his arms behind his back, legs apart, allowing his locked cock to dangle however little it could.

He was whimpering a bit from the chastity. He was used to having his constantly erect cock face at and draw attention from whoever was talking to him. Now, he was locked in a cage which turned his 7 inches into basically nothing.

Bruno knew he was getting punished, but a part of him still maintained a certain pride – the pride of a bodybuilder that kept him training, that puffs his chest out even further. This body was his no longer – the buzzcut and the clean chin were not of his own volition – but he did make it what it was today, mountain of muscle and all that.

The owner clapped his left hand on his left knee twice, indicating that Bruno was to lie face down over his lap, where he was then ungagged.

“This is your body, you should know.”

“If you were having a bad time, you wouldn’t have disagreed so much with us getting another slave to make your work easier.” Another smack.

Bruno tried rationalising his attempts to give himself pleasure with reasons such as “the customers were difficult” and “you haven’t played with me for a whole month,” all of which were met with painful spanking and led to Bruno shouting louder.

A relative silence followed. Bruno, his ass red with palm marks and his face flushed equally red from the shame he had brought on himself, collapsed flat onto the sofa his owner was sitting on, panting heavily.

“Fine, I’ll let it slide because why the fuck not. All I ask from you is a little bit of discipline and trust.

“You’ve disappointed me, slave. And still…”

There was a pregnant pause as Bruno was awkwardly manoeuvred into a traditional hug position.

Bruno was now resting his head on his owner’s shoulder. Knowingly or not, he was clutching tightly. That he was sold to a buyer who cared for him as if he were more than just a very large slab of meat, that he could keep his massive body well fed and well maintained, were each miracles themselves.

Stockholm Syndrome or otherwise, Bruno loved his owner, and his owner clearly loved him back.

The puddle of sweat on the recliner was still present, but was noted to be a bit smaller. Evidently, this scenario seemed to be a bit less intense; the daze Luke was in last time was simply not present. In fact, he was greeting a chuckling Matt as he came in.

“…I love that scene,” Luke said, slightly timidly, as if afraid he would shatter something delicate. “…but?”

Matt took some time to look at the bodybuilder trainer cuffed to his machine. Oh what fun it would be to play with him, and play with him some more.

After some careful deliberation, Matt gave the naked bound man on his chair an invitation. 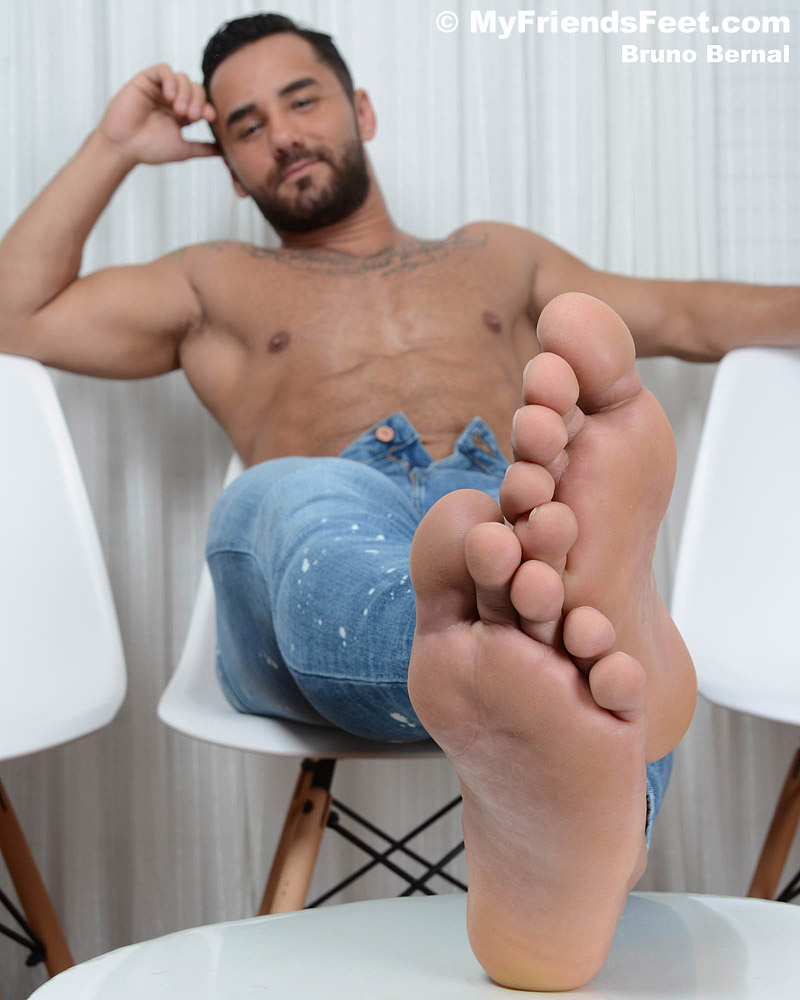