PC Keith Phillips checked his watch and sighed – still an hour to go before the end of his shift. Tonight had been a long, frustrating evening and while he had been busy earlier, the last couple of hours had been quiet and he had been patrolling on foot on his own. The usually busy streets were empty due to a combination of a fine drizzle and the fact that it was three days before Christmas. He sighed again as he turned to head back towards the station. On nights like this, he really wished he had a police dog to keep him company.

Keith took out his phone in the forlorn hope that someone would have texted him – no luck. Everyone he knew apart from work colleagues was probably asleep. As he resigned himself to a miserable trudge back through the silent streets, he caught sight of a car’s headlights shining out from a garage block. The block was at the end of a narrow, darkened lane and he had often found people up there shooting up. At this time of night, any light was unusual so he squared his shoulders inside his stab vest and walked up the lane.

As he approached, he couldn’t see anything past the headlights as they were facing directly down the lane. He raised one hand to try and screen his eyes, but it didn’t help and he had to walk past them in order to see what was going on. Once he was beyond the glare of the headlights, he could see that the vehicle was a black BMW, all four doors and boot open and the engine running. Keith could see there was no-one inside and the keys were in the ignition. The inside of the car looked immaculately clean.

Keith took out his torch and used it to check the area around him. He couldn’t see anyone and there didn’t seem to be anywhere anyone could he hiding. He walked around the car and as he did so he could see that the boot was empty except for a small black box sat right in the middle of it. Satisfied that the driver of the car wasn’t around, Keith checked the number-plate of the BMW, intending to call it in but it was jet black with no number on it. He leaned into the car and opened up the glove compartment – which was totally empty. The inside of the car smelled – not that “new car” smell but something else. It was an odd smell, slightly lemony and he couldn’t put his finger on it. He quickly searched the inside of the car but couldn’t find anything in it. So, he returned to the boot.

The black box was about 6 inches square and seemed to be right in the centre of the boot. He couldn’t see a catch on it, so Keith leaned in and lifted the lid. It opened easily but Keith wasn’t sure what it was he could see inside. The box seemed to be full to the brim with a shiny black substance. As he leaned in for a closer look, he got a much stronger blast of the smell. He took a pen out of his stab vest and pushed it into the substance. It gave way like a thick viscous liquid and as he pulled the pen out a thick clump of the substance came with it. Keith tried to shake it off, but it wouldn’t go, so he took an evidence bag out of his pocket and used it to slide the substance off of his pen.

He lifted up the evidence bag to look at the black blob inside. “What the heck is this?” He decided the time had some to call this in and put his pen back in his stab vest so that he could radio it in. Keith didn’t realise that there was still some of the substance on the pen and a large drop of it fell off and landed on the toe of his combat boots. As it hit the leather, it spread and everywhere that it went, the leather was transformed into gleaming black rubber. Keith didn’t notice as he was trying to call the control room, but all he was getting over the radio was static. He carried on trying as one boot was transformed and some of the fluid slid onto the opposing boot. A shiny patch appeared on his stab vest over the pocket where he had put his pen. A small amount of the substance was still on it and soon the cover of the pocket was turned to rubber.

Keith was still trying to call control room, unaware that both his boots were now made of rubber. The substance then slid under the cuffs of his combat trousers and started to move upwards. As it did, the cloth of the trousers was dissolved revealing the flesh beneath – flesh that quickly turned black as it became rubberized. That flesh was soon covered again as the boots started to grow up Keith’s legs, forming sheaths of thick rubber over his skin. Keith could feel something was wrong and looked down. “What the fuck?” He reached down with his right hand to touch one of the boots and, to his shock, the rubber substance flowed onto his hand.

Keith stepped backwards, shaking his hand to get the substance off. All that succeeded in doing was spreading it over his hand and he felt the rubber forcing his hand into a fist shape. Before he knew it, his hand was covered in a featureless ball of rubber and it was moving up his wrist. He reached up with his other hand to press the emergency button on his radio, to find that it was covered in a thick film of the substance. Parts of his stab vest started dropping off as the substance changed some of it and discarded the rest. In seconds, his mundane vest was replaced with a thick rubber sleeveless top, secured at the sides with buckles and straps. Keith could feel the substance working on his body underneath the vest. His waist slimmed down, while his chest expanded and the vest adapted to make sure it was tight around his newly muscled torso.

Meanwhile the rubber working up his legs was making changes too. The boots stopped just short of the knee, but it continued to change his skin to gleaming rubber. Muscle piled onto his thighs and Keith dropped to his knees as they seemed to be unable to support his full weight. The combat trousers were mostly dissolved, leaving him with a skin-tight pair of rubber chap shorts. Keith made the mistake of using his free hand to pull at the rubber vest and soon both hands were helpless rubber balls. The rubber flowed smoothly up his arms, and he cried out as his pecs bulged with new muscle. Keith started to yell for help, just as the rubber flowed up over his head. It flowed inside his mouth, gagging it shut and thickened around his neck to form a heavy rubber collar. The rubber completely covered his head, with only two holes for him to breath through. Inside the hood, Keith felt things plug his ears and lights shone into his eyes. They pulsed in patterns that confused him, but for some reason he could not stop watching them. His struggles ceased as he watched the patterns that were starting to re-write his personality.

Outside the rubber had reached his crotch. Sliding over his cock and balls, they swelled and grew, hanging down beneath him. Thicker rubber formed around the base of his cock and behind his balls, ensuring Keith would remain erect. The rear of the chaps shorts extruded in two directions. One pushed its way deep inside Keith’s arse, filling it with a heavy plug that rubbed against his prostate. The other extruded a rubber tail that wagged to and fro with every movement Keith made. The tail ended up nearly 2 feet long.

Keith’s skin was now totally covered in black rubber and rippled with new muscle. Inside the hood, the person that was Keith Phillips was gone and the lights changed as he was given a new personality. His kneeling pose changed to a more natural one on all fours. As he moved, the hood changed too. The ears grew until they were long and pointed and the mouth extended into a proper muzzle, lined with rubber teeth. A red rubber tongue lolled out of the side of the muzzle. Under the hood, Keith’s head had transformed as well and, for all intents and purposes, the hood was now his head.

The lights stopped and eyeholes opened in the hood. The rubber dog looked out on a monochrome world as a man dressed in a leather uniform walked out of the darkness and clipped a leash to the dog’s collar. He reached into the boot of the car and closed the box. “Come on, boy.” He jerked on the leash and the rubber dog obediently followed him as he walked off. He whistled to himself as he walked away – a night patrol was always better with a dog to walk with.

To read MORE from this author, click for Corporate Takeover 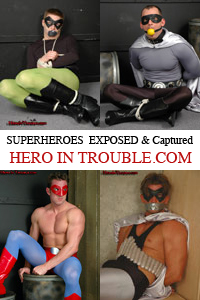