David stood in his complex’s lobby, staring down anxiously at his phone. On it was the logo of the Game, along with a countdown: “00:00:01;24”. That damn timer had been ticking down for what felt like an eternity. For David it practically was; he’d been waiting for his chance to compete for almost 4 months now. 4 months of evenings filled with cruel tortures, mind-numbing tasks, and above all the aching, unrelenting pangs of horniness. This month had to be it. It would finally be his chance for release, he could feel it!

His heart raced as the timer ticked down to the very last seconds: three, two, one…

Stand by for orders at 20:00 hours, EST. Failure to report is punishable by a penalty month; repeat offences will result in automatic forfeiture.

David’s heart sank. Another month of waiting! How long until he’d be able to get even a chance at his freedom? Dejected, he headed for the stairs.

Once in his apartment, he stripped; it was Game day, and no doubt there would be operators behind the camera at the main entrance. He looked in the full length mirror to his side; his cock was still encased in that damnable chastity cage, emblazoned with a large 21 on the front of the tube, with a smaller Game logo above it. Moving up past his hairy abs and toned chest, his collar gleamed as it caught the light; the heavy silver lock bore another 21. A quick glance at his phone told him it was already 8 o’clock. The Gamemasters frowned on idleness; David needed report as soon as possible to avoid another penalty. After taking a moment to relieve himself, he headed into his “living room”, really just a yoga mat lying in front of his laptop. He knelt down, woke the computer, then put his hands behind his back. The Game’s software started automatically, piping out a familiar synthetic voice.

“Participant 21 verified. You will need: nipple clamps, large butt plug, wrist restraints. Gather your equipment and return to ready position. Stand by for further orders at 20:00 hours. The first stage of this month’s Game will commence once all participants are ready. The last Participant to be ready will receive a penalty month.”

David let out a sigh. At least this month’s task seemed relatively tame. As he got up and gathered what he’d need, he could only wonder…

“Which one of those lucky bastards is getting out this month?”

Thanks to Metalbond reader Jim for this story! If you like it and want more, be sure to let him know with a message in the comments, directly below! 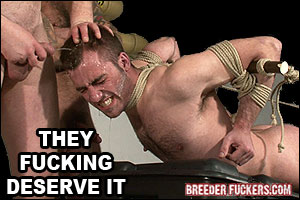