After several weeks we had managed to sort things out and got our new family structure working for us. My Sir decided that his boy and mine would wear leather jocks and Wesco’s when he was around. My part-time boy was a little relieved considering my Sir was his father.

Sir usually spent the weekends with us and on his second weekend we sat down as a family and decided that it was time to sort out the living arrangements as we basically had taken over my part-time boy’s house. So after a lively discussion, we decided as a group to purchase a new house in this city and that my full-time boy and I would sell our current house and relocate. Since we both worked from home it would be no problem for us to coordinate this with our work. My part-time boy would continue to live separate for now until he felt ready to commit to the family full time. We all agreed as we all wanted him to be happy and since it was his father that was my Sir we knew he had the most to adjust too.

The next few days were spent looking at homes that might need our needs and we settled on a large Victorian home near a small stream on the outskirts of the city. The paper work was completed and my boy was sent back to our house and arranged with movers to get it packed up and put on the market. The house was sold after 4 days on the market so we were able to get an early close on the sale.

Several days after we had sold one house and bought another I was told to report to my Dr. for a follow up. My boy was to come as well but he was still out of town. After another anal exam, i was told I was good to go. The Doctor saw my collar when I took off the paper exam gown and asked what the hell was going on. I smiled and gave him the short version. He laughed and told me that I certainly lived an interesting life. I nodded and said it was only getting more interesting.

After leaving the Dr.s office, I sent my Sir a text telling him that I had been cleared for full duty. He responded and told me that I had better be fully prepared for action. I laughed and headed home. As it was Friday, I knew Sir would get to the house for the weekend around 6 or so and I headed home. I pulled the Harley into the garage and ran into the house. I told my part-time boy the news from the Dr. and he laughed when he saw the text I had gotten from Sir. I went to the bedroom, stripped and went to the bathroom. I gave myself enemas until I was running clear and then grabbed the trimmers and trimmed my hair and beard.

Sir decided he liked me with a buzz cut so I had to keep it that way. My heavy dark beard was kept trimmed so it was about ½ inch long. I finished with the trimmers and hopped in the shower. After showering, I toweled off and pulled on my leather jock. I worked my cock and balls through the opening on the back plate of the jock and then snapped on the heavy leather pouch. I put on a pair of boot socks and then my Wesco’s.

I headed downstairs and then to the dungeon. I picked up a lube injector and filled it and inserted it in my hole and pumped lube into my ass. I grabbed a butt plug and worked it into my hole and it finally slid in and seated itself. I was not used to wearing plugs so it felt strange as I walked around. I grabbed a towel and wiped my ass down and took it with me so I could sit on the towel if needed and not leak lube onto the furniture.

I got back upstairs just as Sir walked into the house. I dropped the towel and quickly dropped to my knees and greeted him by kissing the toes of his shoes. He rubbed my head and told me to get up. I stood with my hands behind my back as he leaned in and kissed me hard. I responded and after a couple of minutes he broke the kiss. My part-time boy came down the stairs and was given a hug and Sir checked in with him for a few minutes to make sure he was doing good.

Sir then looked at me and told me to get my ass down to the dungeon and strip. I was to wait on my knees for him. I turned and headed for the dungeon and got ready. He went upstairs and went to the bedroom we shared when he was staying with us. He stripped, and put on a pair of police boots. Then he put on his new chaps and a bar vest. He walked down and his son was in the living room and told his father that he looked hot and to enjoy himself. His father laughed and said that he would try.

I heard his boots on the stairs and knew he was coming. I shifted position so I faced the door and he walked in. I looked up and saw that he was wearing chaps and a vest. His dark furry body looked fucking awesome in the leathers, and his cock was standing straight out and a bead of pre-cum slowly dripped from the head.

He looked down at me and told me to get my ass over to the fuck bench. I stood up and got over to the bench and got on it. He followed me over and strapped me down. He walked behind me and spread my ass cheeks and saw the butt plug in my hole. He asked me what the hell was that and I told him it was a butt plug to help open my ass so he could fuck me. He pulled the plug from my hole and told me that I was not to use a plug again.

He wanted my hole tight and I nodded. He picked up a leather strap and began strapping my ass cheeks and telling me that I needed to learn a lesson about obedience. I groaned and he continued for a few minutes until both ass cheeks were dark red and hot. Then I felt his cock probing at my hole and I tried to relax it as much as I could so he could slide into my hole. I felt his cock slide into my hole and he kept pushing until he was buried to the hilt. I felt his balls slap my ass cheeks and he held his cock there till suddenly he became fucking me with long hard strokes. He rode my ass and I moaned and groaned as he pounded my hole.

I laid in the sling and he wrapped the restraints that were always kept locked to the chains around my wrists and then my ankles lifted and separated my legs. He grabbed the lube and greased up his cock again and shoved it against my hole. I relaxed and let it slide back into me and he began to slam in hard and deep. I laid there staring at the man who now owned me completely. I knew now that I was definitely his boy and that my ass belonged to his cock. He kept pounding me and then he moved his arms so he leaned forward and grabbed my nipples and began twisting them. I groaned and struggled in the chains as he kept pounding my ass.

Finally he stopped and began to pump another load deep in my ass. He leaned forward till his furry chest was resting on me. He rested there and then stood up and slid his cock out of my hole. Just then we both heard something and he turned around and smiled. His son, my part-time boy was standing in the doorway watching.

My boy walked over and gave his father a hug and then moved over to me and leaned down and kissed me long and hard. I responded and after tongue fucking each other’s mouths he stood up and moved away. He looked over at his father and told him that he was definitely a natural alpha and that he was proud to be his son.

He left the dungeon and Sir came back over to me and leaned down and kissed me and asked if I was up for another round. I smiled up at my Sir and told him he was the boss. He nodded and grabbed my left nipple twisting it hard and told me, “and don’t you forget it boy!” 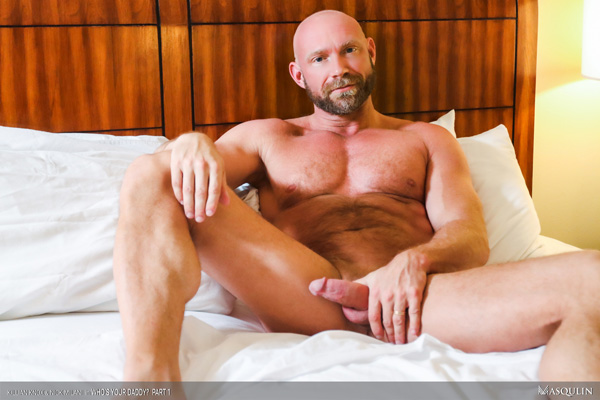