4798 stood in the middle of the 4 men who were now his personal tormentors.  As a prisoner who was locked in the Supermax wing of the Ferguson Correctional Centre, he knew he had no rights and now it was confirmed.  Total control of him had been given to these men by the Warden of the facility, Captain Ferguson.

The men stood quietly looking at their new piece of property.  One of them said he needs to be cleaned up as he is a filthy pig.  The others nodded and 4798 was quickly cuffed in the hinged cuffs and the lock box on the cuffs that were standard issue in this wing of the prison.  Two of his guards grabbed him by his biceps and he was marched or dragged down the main cell block to the shower room.  There he was sprayed down with liquid soap, scrubbed down by one of the men using a long handled brush and then told to stand under a shower head while he was rinsed off.  His beard, now grown in thick and dark as it had been weeks since he last shaved dripped water down his chest.

Once he had been cleaned up, he was marched back to his cell.  Once there he was put in the cell and the door clanged shut.  He sat down on the vinyl pad on his bunk and shivered as he was not given his prison uniform back.

He sat still and tried to think how many weeks left he had before his release from prison.  He estimated that he still had 5 weeks to serve before he was paroled.  He began to regret signing up for this experience as it was becoming way more intense than he had bargained for.  He thought it was going to be time locked in cells but it was now very real and very intense.  He had always been submissive but never thought of himself as a slave.

The lower slot of the cell door slid open and a prison uniform was shoved through.  The slot closed and he walked over and picked up the clothing.  It was a clean uniform with his prison number on it.  He got dressed and at least felt warmer.  He went back to the bunk and laid down and fell asleep.  He was deep asleep when he felt a hand covering his mouth and startled awake.  He tried to get up but was held in place by his 4 guards.  The men stood over him and held him down on the bunk.

They quickly fitted a set of humane restraints to the bunk and then locked him into the restraints.  The strap under his neck had a locking collar which was fitted and locked around his neck.  The wist belt locked around his waist and there were wrist cuffs attached to the belt which held his hands so they were now locked beside him.  The foot strap had ankle cuffs which kept his legs spread apart.  He was effectively locked to his bunk by the tightly fitted padded restraints.

His guards told him that except for his hour in the exercise yard or when he was working under their supervision, he would be locked to his bunk.  He nodded and watched as the guards left his cell and the steel door slammed shut.  He tested the restraints but there was no give in any of the restraints.

Time dragged slowly as 4798 stared at the steel ceiling of his cell.  He heard the locks on the cell door open and the door rolled open.  His guards entered his cell and unlocked him from the restraints.  He was ordered to his feet and they quickly slammed him face first into the wall and put on the handcuffs he always wore when taken from the cell.  He was walked to the door to the outdoor exercise cage and then into the cage.  The door was closed and he was alone in the exercise yard.  He walked around the yard stretching his torso and legs as best as he could with his arms cuffed behind him.  He knew he had to keep moving otherwise the guards who watched him in the cage through the security cameras would use the yard’s public address system to yell at him and threaten him to keep him moving.

Finally the door opened and he was yelled at to get back to the door and he walked over and he was grabbed by 2 of his guards.  He struggled a little but a riot baton jabbed into his gut quickly calmed him down.  His guards held him tight and yelled at him that he had earned a visit to a punishment cell once again.  He nodded and smiled at the guards which just angered them.

They dragged him down the main cell block and into a room at the end of the cell block.  The room was fitted out with a St. Andrew’s cross and a fucking bench.  His cuffs were removed and he was dragged over to the fuck bench and strapped down tightly.  One of the guards walked over to the rack on the wall and picked up a heavy rubber strap.  The other guards nodded and one said that 4798 deserved the prison strap.  The first guard moved behind 4798 and began to punish 4798.  After 10 strikes with the rubber strap, 4798 was dazed and overwhelmed by the pain in his ass.

One of the other guards walked over and after picking up some lube, grabbed a large butt plug and greased it up and shoved it into 4798’s hole and he groaned as his ass stretched and he was plugged.  He was unstrapped from the bench and he slowly stood up.  He was grabbed and held as he was fitted with a waist belt and strap between his legs which was locked on to hold the butt plug in his hole.  The guards then slapped his semi hard cock and then fitted a steel chastity device onto his cock and balls.  He was then told to pull up his underwear and pants.  He was cuffed again and walked through the cell block to a room when it was opened it was the guards lounge and break room.

The guards removed his cuffs and told 4798 to clean the room and the bathroom.  They sat down and kept their weapons at the ready.  He went over to the cupboard marked cleaning supplies and got out what he needed.  He did the bathroom first and when that passed inspection he moved into the main room and cleaned.  He was finished and the guards approved of his work.  He was cuffed and moved back to his cell.  He was uncuffed and shoved into the cell and told that he had earned some free time before his evening meal.

He sat down on his bunk and tried to get comfortable with the large butt plug locked in his ass.  He finally found a way to sit so he could relax a little but his cock was trying to get hard in the steel tube encasing it.  He slumped and just rested. He tried rubbing his cock but all he got was more frustrated by the steel tube.

He fell asleep and was jarred awake by the lower slot clanging open and his food tray sliding into his cell.  He picked up the tray and quickly ate the meager meal.  The meals were designed to provide basic nutrition but not enough to provide him with enough energy to resist.  He noticed that he was not as energetic but his mind knew he was being kept this way so he would be easier to handle by his guards.

The lower slot clanged open and 4798 slid his tray back out and when it was checked and found that he had returned everything, the slot closed.  Then the main cell door opened and his guards entered and told him to piss as it was time to be put into his restraints.  He obeyed and pissed and then laid down on the bunk and he was quickly strapped down to his bunk.  His guards left the cell and the door clanged closed and locked.

The lights in the cell went out and he laid there in the dark unable to move.  He began to think about what he could do to realistically push it with the guards and cause them to really work him over and into heavy restraints.  He came up with an idea as he fell asleep with a smile. 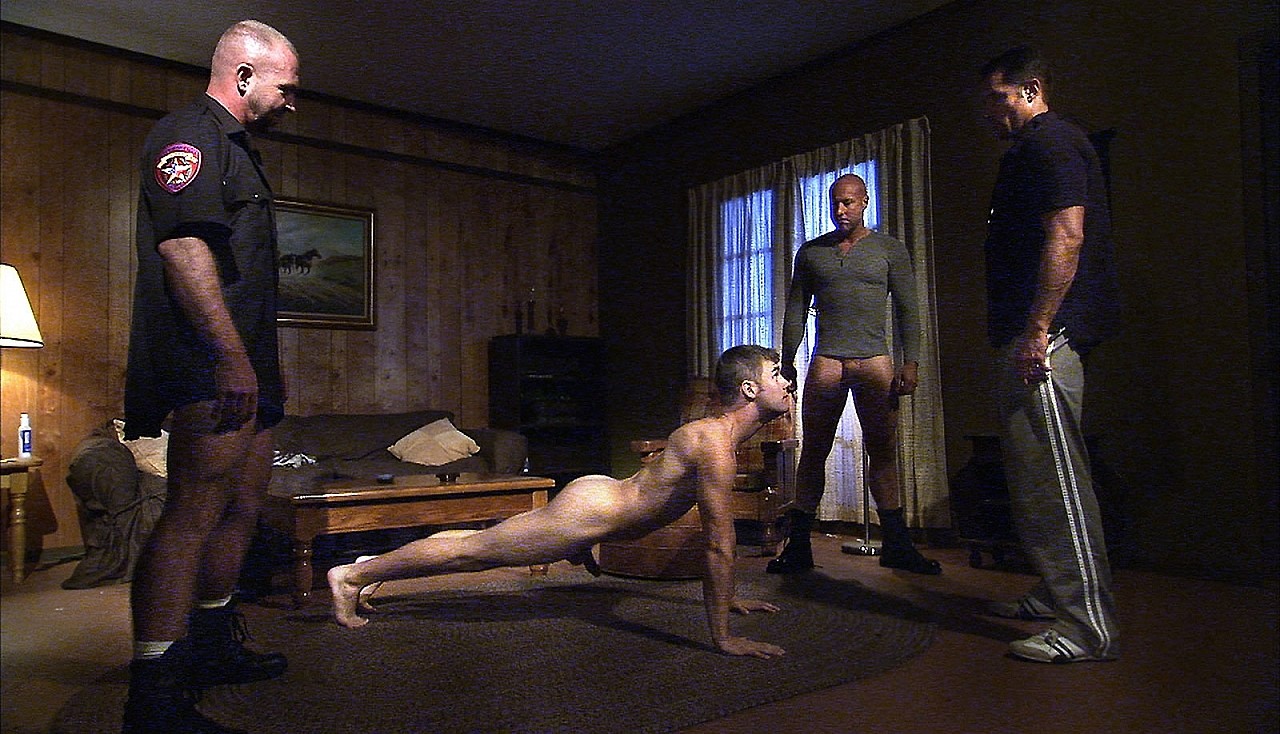