Needless to say, I was exhausted. I was glad that the next thing they did was to lock us back in our boxes and feed us another workie bar. I gobbled the awful thing down and fell asleep on my awful, horrible bunk.

But just because I was calling it a day didn’t mean that Boss Drum was. I don’t know when, because without any clocks or cell phones to look at I was losing track of time, but at some moment that was way too soon there was a bang on the door and a key turning in the lock, and I had to STEP OUT and LINE UP and STAND AT ATTENTION while Boss Drum introduced us to yet another workie who was appointed to order us around. This one was a young black guy, very precise in the way he talked, and he was there to “start you workies off on your on-the-job training for your future positions in life.” The name on his shirt was Grig, and our first on-the-job training was washing floors. “And I’m gonna go ahead right now and tell you about how to do that.”

Which he did, at length. He also told us what to do if an officer came by during the performance of our duties. “What you must do on that occasion is to IMMEDIATELY get to your feet and present your FACE to the nearest WALL, clasping your hands behind your back, and remaining in that position until the officer has passed or has given you orders.” He explained this with useful examples. Then he put us into nuts to butts mode and marched us down the corridor, where he opened a door that had J1 stenciled on it. “We have a number of janitorial closets and storerooms in the facility, and this is one of them. J stands for ‘janitorial.’” Inside room J1 was a sink and two faucets and lots of soap, all labeled “Industrial Grade,” and lots of buckets and brushes to go with it. Unfortunately, there were no mops in room J1. “We do not use mops on this work detail. It is important for workies to know how to do things without labor saving devices.” Like mop handles!

The short story is that I spent the next several hours washing floors with a brush about six inches long, and jumping to my feet every time a cop came by, so I could put my face on the wall and not have to be noticed as a living entity. Grig showed up frequently to tell us to do something over again. He had told us to maintain silence except when answers were required by such exalted persons as himself, but while you’re crawling on the floor naked to wash the same patch of concrete one more time (you hope), you would like somebody to talk to. So when Grig wasn’t around I dared to whisper to whoever happened to be next to me. The first was the bar fag, whose name I learned was Dylan. His ass was still red—and so was mine, by the feel of it!—so he was shaking with nerves whenever I whispered something. He didn’t want his ass to get redder. But he did answer my question about why he’d volunteered. “I wanted a man to buy me and keep me.” OK, that figured!

The other one I got to was the philosopher. His name was Victor. And I’d actually guessed right about his former occupation. Contrary to what Jerry thinks, I do know SOMETHING! I asked him WHY he’d dropped out of grad school and had volunteered to become a workie. “I was bored,” he whispered. I pointed at the suds he was swabbing on the concrete floor. “And this isn’t boring?” I said. “I guess you’ve never read Kant,” he said, and took another swipe at the floor.

Just when I thought my back was gonna break in two, Grig ordered us—at length, again, with all the details filled in—to empty, rinse, and stow our “cleaning tools” and prepare to be “locked in your boxes for the night.” Which happened. I never thought I’d look at a steel storage compartment as a refuge, but I did. I woke up when the third workie loaf of the day came through the hatch, together with a fresh bottle of water, to wash down the loaf and help to wipe my ass after I took my next shit. I was thankful for both. The loaf went down fast. So did I. Except for another late-night bout with the shit hole, I slept without thinking until the next morning, when the same workie food tumbled through the hatch and the same set of commands from the same boss workie and got me to shit and fold and turn out for inspection. The officers must have gotten tired of us, because Drum did all the inspecting this time. Then he got tired of us too and let Grig send us on our one-mile nude marathon. Because that’s what it was, a mile, when you do 20 laps like that! And on concrete! With bare feet! And your hands behind your back! Then Grig got to send us to the showers. Only this time it wasn’t with a hose, and the water wasn’t completely cold. We all pressed together under one of the 10 heads in the Shower Room—why waste water on a bunch of workies?–and Grig threw us a little bar of soap. But why wash us at the beginning of the day instead of the end–so we’ll get used to smelling like workies all night?

Then there was an instruction session about our next labor detail. Again, the session was administered by obviously-bucking-for-boss-workie Grig and involved “cleaning and SHINING” all the toilets and toilet holes in the facility—“all those toilets, that is, which are in current use. You are not required at this point to clean and shine the toilet holes in boxes that are not in use at the present time.” Thanks for clearing that up, Grig.

Cleaning the toilets didn’t provide as many opportunities for chat with other naked workies, but it did provide exciting encounters with cops. Such as cops in their Break Room (break from what?). When I showed up with my toilet cleaning apparatus, issued by Grig with great care from room J3, the cops were all laying back in their chairs with a pile of donuts in front of them. I immediately put down my pail and brushes and put my face on the wall. Big laugh about that. Then one of them yelled “Cmon, toilet boy. We won’t hurt you. Toilet’s in the bathroom. Over there.” But it took me a while to get to the bathroom. It seemed like every step I took, a leg would shoot out in front of me, and a cop would yell, “Whaddaya say, workie? Ain’t gonna apologize for hittin this officer’s leg?” So I’d have to stop and say, “Sir, please accept my apology, sir,” and then it would happen again. A lotta fun on a Sunday morning—much more fun than goin out to a great brunch at Melsado’s with Mike and our friends.

I know the cops were having a good time. You could have heard them laughing all the way to Mike’s house. On my way back through the crowd, it turned out that a few of them had those things that guys use in SM stuff—those little floggers. So while I came through with my toilet cleaning gunk in one hand and my brush and so forth in the other, I got the floggers on my legs and my butt and my back and even a sickening chop to my junk. “So long workie!” they yelled.

Then it must have been noon, because we were marched back to our containers and locked in and fed our workie bars.   I couldn’t sleep like I did the day before. Because guess what? I knew my 48 hours must almost be up. Now I had to get myself together so I wouldn’t come out of this like I’d lost the bet to Jerry. He had bet that I wasn’t strong enough for this, and of course he was right. So I’d have to make it SEEM that I was emerging victorious—self-confident, superior, HAPPY. I noticed that my hands were shaking. Also that I had a bruise on my balls from that flogger. All right, so what if Mike and I didn’t have sex for a while . . . . Wouldn’t be anything new. But big question: When would he come to pick me up? Four hours from now? Three hours? Two hours? He was supposed to pick me up at four o’clock. That was the end of the 48 hours. But maybe he would get there sooner.

A BANG on the door. Fuckin Grig summoning me to clean some more toilets. This time, the currently, and NOT-currently, used ones in the “boxes.” Seemed that some new workies were expected soon—convicts this time. Naturally, they needed their toilets to be clean.

Hour after hour, toilet hole after toilet hole. And those holes are really gross to clean. What fuckin time is it? At least you know that the longer it takes, the closer you are to getting out! But fuck! Can’t Mike get here a little early? I look at the other dudes, trudging around naked with their toilet-cleaning equipment. Pathetic! I’m glad I’m getting to see how pathetic some people’s lives are. I actually, really, didn’t understand that before. Now I’m gonna enjoy my life more. But where the fuck is Mike?

You know how it is when something’s supposed to happen and you keep checking your phone to see what time it is, so time slows down to, like, dead, and just stays that way? It’s a lot worse when you’re cleaning toilets and there aren’t any clocks.

About an hour after I thought that up—not a good hour for me–Grig found me in storage unit 27 and told me to follow him. “Hands clasped behind your back, workie.”

Grig marched me back towards the end of the corridor, where there was a sign over a door that said SALES DISPLAY. I could guess what that meant, but Grig made it pretty clear.

“You just been advertised,” he said. “And looks like you got somebody out there that wants to buy you. How did that happen?”

“Relatives are not eligible. Don’t try to fuck with that.”

“I think there’s somethin going on.”

That really fucked him over. But he had to unlock the door and let me in.

I heard the door lock behind me, and I was in the Display Room. It was all happening!

Metal would like to thank Joshua Ryan for sharing this story! It is being be serialized here with new parts every few days. 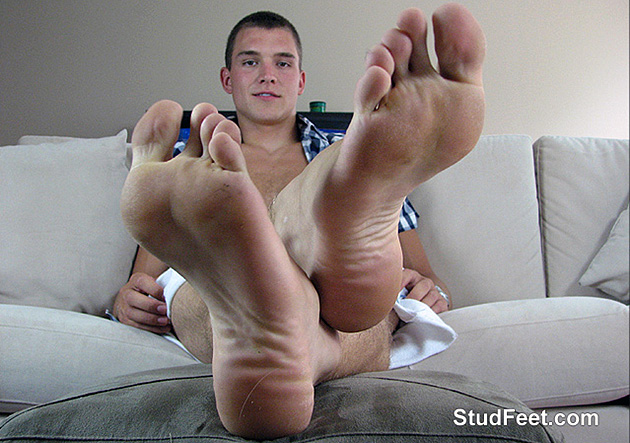