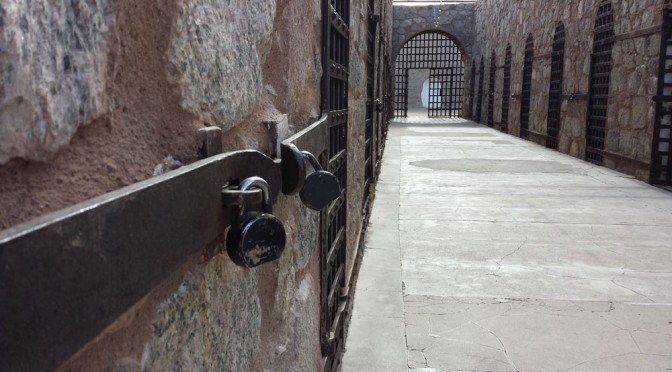 The Yuma Territorial Prison was used in the early days of the foundation of Arizona Territory. As you can imagine it was a brutal place to be locked up at during the long hot summer of the desert. Now a State Park, there is very little left of the original prison, but there are some parts — and that is what my photos show. Interestingly, there are still graffiti from the former inmates on some of the walls.

The place that struck me most was the Dark Cell. Entering a solid stone building one steps down a long hall where the light gets dimmer and soon enters a rather large room with no windows with only one door. The entre room is stone, walls and ceiling.

I stepped inside this lonely space and began to feel for those that actually spent hours, days or weeks in the solitary place. Since the door will not close today, I am not sure if there would be a sliver of light to keep one’s hope up. I felt uncomfortable as I took another step as I could feel the desperation and despair that a man would feel being locked in this space.

This stone prison sort of freaked me out, and I couldn’t step further inside.

I could only imagine a man in only his striped prison shirt and pant, perhaps in shackles, pushed into this space to never know when he would be released. I am sure it would be silent inside and one wouldn’t know what the outside world is experiencing. There was no place to go to the bathroom, so it must have become smelly as well as the air becoming stale. Being shackled and having to feel out where the room ended and knowing you had no chance of escape beyond these thick stone walls.

What would a man think inside such a place? Would they atone for what they had done? Would they only be more angry at the world and those who imprisoned them?

When I entered the prison through the visitor center I would have never thought I would have had such an emotional reaction to one dark stone room.   But here was one spot I could enter and share the emotions and thoughts of those who were once locked inside. 2 thoughts on “The Yuma Territorial Prison”