Through a chain of events, that were totally unexpected, i was asked if i would be interested in playing with a Top that is well known in the community, during his visit to the Seattle area. He was staying with a friend that had a dungeon. As communication continued, i found out that i had met his friend a couple of times and knew he was a great guy that i had enjoyed visiting. We had never played but had gotten along very well when we had met at a couple of local dungeon parties.

The Saturday arrived and i headed down to the Lars home. Larry was going to be late, because of a mix up in his flights. Lars and i had a great visit and talked about many things. He gave me a tour of his complex, a beautiful home, with indoor pool and a wonderful dungeon. The dungeon, which i would get to know intimately, was well laid out with many pieces of furniture that Lars had made himself.

When Larry arrived, we visited some as he rested a bit from the long drive from the airport. Then he wanted to get started. And who was i to disappoint him. We went to the dungeon and laid out the gear that was going to be used on me.

END_OF_DOCUMENT_TOKEN_TO_BE_REPLACED 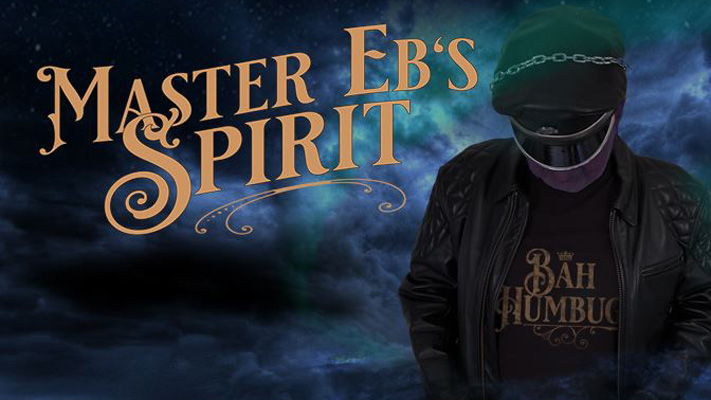 MASTER EB’S SPIRIT is an original play by Ty Dehner, set in the gay leather community of today. In this play, Master Eb is visited by three Spirits on Christmas Eve in this modern styling of Dickens’ “Christmas Carol.” 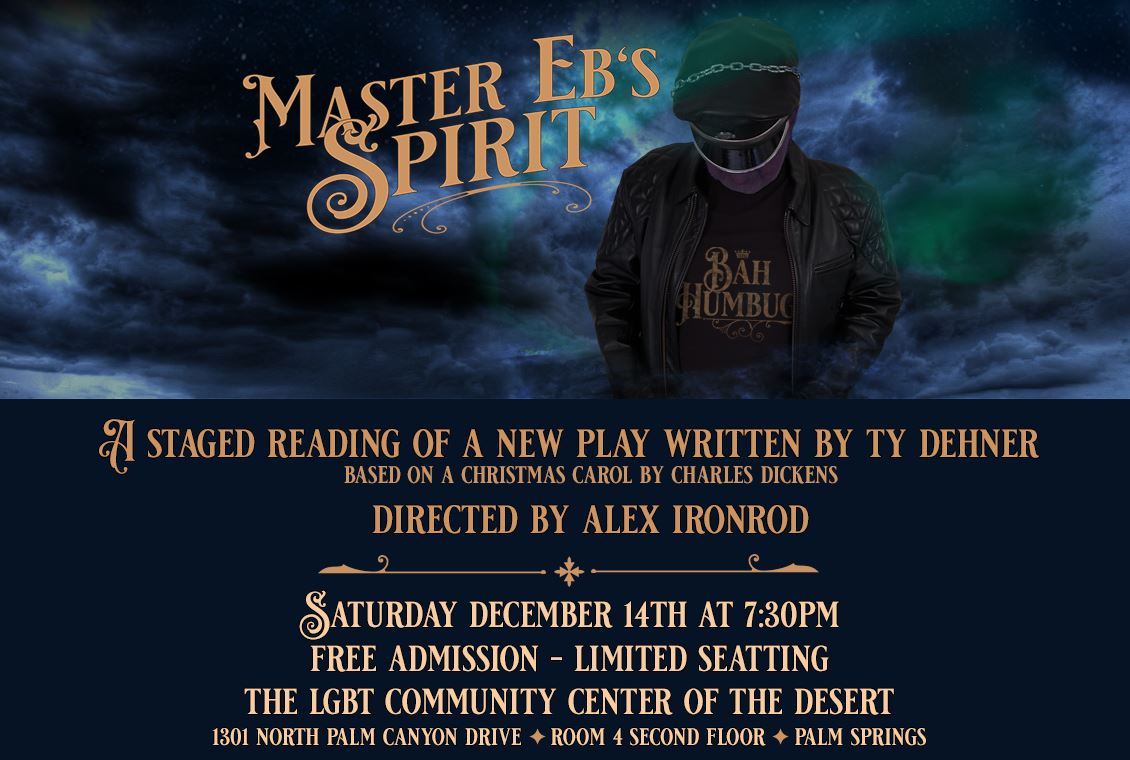 This will be a staged reading which is a theatre experience without sets or full costumes, with some stage action described. The actors retain their scripts, which they have studied and rehearsed with, as they move around and interact with one another. They make full use of their imaginations to bring the play to life. Members of the audience will be invited to use their imaginations in return.

This event will be in Palm Springs! 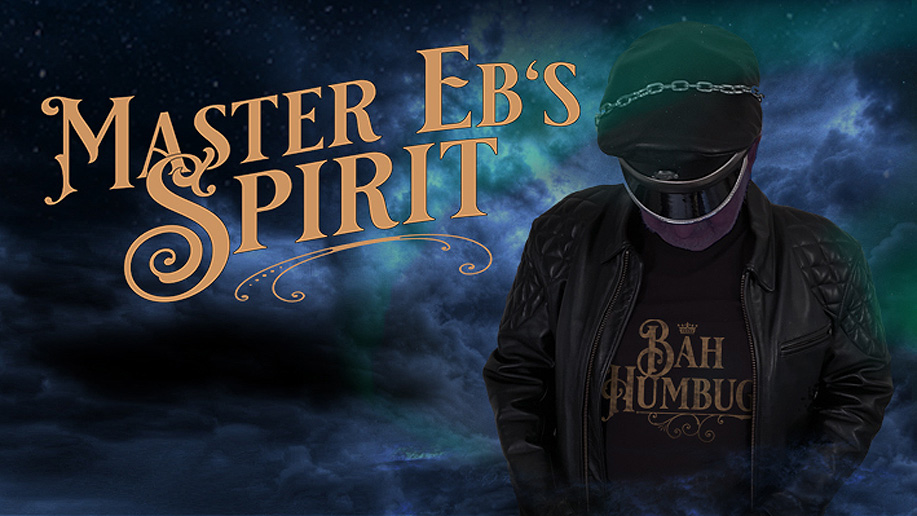 MASTER EB’S SPIRIT is an original play by ty dehner, set in the gay leather community of today. In this play Master Eb is visited by three Spirits on Christmas Eve in a modern styling of Dickens’ “A Christmas Carol.” The first Spirit presents him with a younger self already looking for perfection in everything from his choice of a slave to the leather he wears. The second Spirit shows Master Eb how his present selfish lifestyle is driving other men and boys away from him. The last Spirit points out a future that promises to be increasingly dark and lonely. Eb needs to change and to look for the true spirit of a Leather Master within himself. But can he begin to make this change after just one night?

MASTER EB’S SPIRIT also brings new and kinky life to such men as Bob Cratchit, Jacob Marley, Mr. Fezziwig and Tiny Tim. Yet they still retain some of Dickens’ character traits. These are some of the pleasures of this new and fascinating drama. 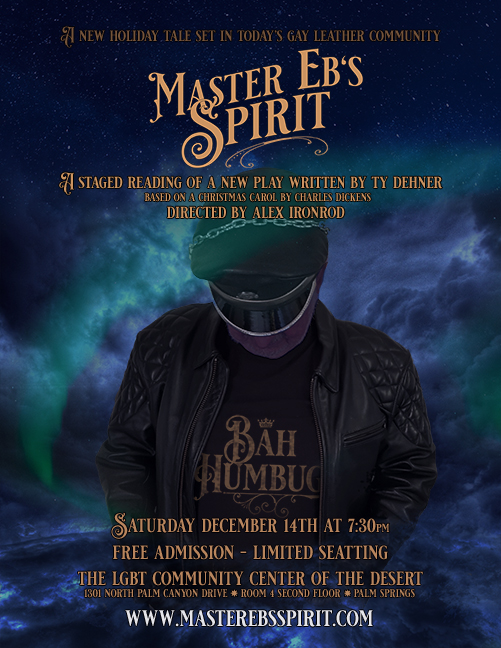 NOTE: On November 16th there will be auditions for the actors to appear in the reading in December. If you are an actor, or if you know of any actors who live in the Palm Springs, Los Angeles or San Diego area and would like to be in the production, please let ty know! The web site has all the information for the performance and audition.

The hotel room was dark, which didn’t mean much to me as I had been blindfolded and couldn’t see anything. The room was cooler so I could tell the sun had set. It must be very late, but I truly didn’t know what time it was. I would listen for some sort of sound but heard nothing. Just my breathing and the sound of the leather that encased me. I was slipping into a slumber as I was so relaxed and enjoying the smell of the leather. That is when reality came shocking back and my crotch was heavily shocked. I yelled into the gag and my body jumps in my confinement. It was then I realized that Jonas was in the room and I was safe.

“You’re still here fucker and you’re still trapped.”, it was Bart. Now I was confused.

“You’re mine now. Jonas has left.” There was a shock and I was getting worried. “Don’t worry I’ll take good care of you in the coming days.”

END_OF_DOCUMENT_TOKEN_TO_BE_REPLACED

We arrive in the neon city and I think about me surrounded by all the people and glitz and I’m wearing a full rubber suit under my cowboy outfit. Will anyone even notice. Jonas knows right where he is going, and we end up parking at one the big casinos. As I get out of the car, I am self-conscious but that doesn’t stop Jonas and he gives me a shock to remind me of his power.

We head into the building and it isn’t long before he is sitting in front of an electronic machine and pressing buttons. I stand behind and to the side so I can see but he knows I am there. Each spin ends with me getting a shock or not. It seems that he is losing more than winning and I am learning quickly how to hide the pain that my cock and ass are experiencing. It’s not like there is lots of time between shocks as each spin last just seconds and Jonas immediately presses the button to start a new game. At the same time, he presses the button on his remote and I am shocked. He pauses after a good half hour of play and looks at me.

“I’m not doing too good boy, but this is the most fun I’ve had losing! I can hear your grunting each time I shock you. I love it!”

END_OF_DOCUMENT_TOKEN_TO_BE_REPLACED

Even with the metal cage on my cock and the small spikes digging into the skin I was able shooting my load into the suit. I was just so fucking horny after all that I had been through that I just couldn’t get to sleep until I evacuated my balls. After coming down from a monster orgasm I fell asleep with my muzzle still on. I was exhausted from the long weekend and just ready to catch up on my sleep. As I woke it took me a moment to catch up on the events and remember how I was still locked in the suit and cage. As I got out of bed, the liquids that have mixed in the suit ran down to my feet. Since I couldn’t use the toilet I just pissed in the suit and then went to my computer. I left the muzzle on as it continued to make me feel submissive.

Sitting down at the computer I power it up and find a message from Jonas. Opening it he told me how much he enjoyed the weekend and that I really impressed him with all that I did. At the end of the message he provided the combination to the lock on the suit and instructed me to get out of it. I was to close it back up so that none of the liquids would escape and keep it in a safe place. On Friday he would contact me and tell me how to prepare for the coming weekend.

END_OF_DOCUMENT_TOKEN_TO_BE_REPLACED

In one’s life there are moments that change our way of thinking while moving us to a path we never thought we’d take. Many of them happen when we are young, some happen later in life and make more of an impact. This is my story of one of the events that changed everything.

Life was good, I was living alone with good friends and a good kink life while creating media for an online kink world. I had recently become self employed that provided me with new ideas to explore. One was attending an annual rubber gathering in Canada. It had been occurring for many years, but I never had the time or guts to travel across the border and experience it. This year was different, and I made the decision that I was going.

There was a theme to the event something like the future. I happened to have a black wet suit and a really cool full-face snow mobile helmet. So, I put together a pair of MX boots and gloves, added battery powered lights in the helmet and got myself a police duty belt and planned on going to the main gathering on Saturday night as a Cop of the Future.