The next morning the boys were again awakened by the sound of Alpha banging his police baton on the metal trash can cover and soon the slaveboy distributed the trays with their breakfast.

Fifteen minutes later Alpha released their ankles from the shackles, the slave distributed their towels and shaving gear, and the boys went to the bathroom to clean up. When they finished they returned to their cots and stood at parade rest following the lead the Colonel set the day before.

The Commander, Alpha, and the slaveboy came into the dormitory. The slave was pushing his cart which this time was piled with blue jeans and construction boots; Timberland-style yellow boots with brown padded leather around the ankles. Cody could also see a pile of steel restraints on the cart’s bottom shelf.

“Strip down and fold your prison uniforms and put them on your cots,” the Commander said. The boys obeyed and got back to parade rest.

The slave placed a pair of jeans, socks, and boots – but no shirt – on the floor in front of each boy and the Commander said, “Put on your work clothes.”

Wrestler, Cody, and Pretty Boy slid the jeans over their bare asses and then struggled to pull on their socks while standing. Each of them knew better than to sit on his cot with the Commander there. The Colonel had put on his socks first and then pulled on the jeans so he was already lacing his boots while the boys were still struggling to keep their balance as the pulled on their socks.

Eventually all four boys were in their jeans and boots and Alpha attached leg shackles to each pair of boots. The Commander ordered the boys to turn around and put their hands behind their backs and Alpha handcuffed each boy.

Alpha motioned for the boys to follow him and they exited the building into the hot sunshine and shuffled past the flogging stand to an open area of dirt. Four shovels rested on the ground about ten feet apart from each other and Alpha led each boy to a shovel.

“You will each dig a square hole, three feet by three feet,” the Commander said, “and I expect the ground to come almost to your hips when you are standing in your hole. When you have finished your hole you will extend it to the one next to you until the four of you have dug a trench.”

Alpha removed the handcuffs and the Commander ordered, “Begin.”

Each boy picked up his shovel and began digging. The ground was soft and the shovels dug in easily when the boys pressed down with their boots. “So that explains the boots,” Cody thought. But even with boots on his feet he very much like a prisoner, digging shirtless in the sun with shackles on his legs.

The work continued and the boys sweated, breathing heavily from the work. Even though the ground was soft this was turning out to be a lot harder than Cody expected when he dug his first shovelful.

The boys dug and dug and Cody occasionally looked around to compare his progress with the other boys. Wrestler was digging strongly like he was working out at the gym, which didn’t surprise Cody at all. Pretty Boy was doing the best he could but not hardly keeping up, which also didn’t surprise Cody. But the Colonel. Damn. He was working rhythmically like some kind of machine, with his hairy chest glistening with sweat as he made a series of identical movements one after the other. Cody, Wrestler, and Pretty Boy each occasionally stood up straight and arched their backs to stretch but the Colonel just continued to dig and toss, dig and toss, like some kind of digging robot. Cody noticed the slaveboy looking at the Colonel intently.

The boys were sweating heavily but if they paused too long Alpha would glare at them. One time Cody stopped to take a small rest and saw Alpha advancing toward him so he began shoveling furiously; Cody had felt the sun beating on his shirtless back and did not want to get flogged with a sunburn, that was for sure.

After what felt like hours – but wasn’t anywhere near that long – the boys heard the Commander announce, “Water break.” The slaveboy distributed a very large bottle of water to each boy and each drank deeply.

“If you need to piss, go ahead,” the Commander said. Cody unbuttoned his jeans and began to relieve himself in the dirt and he watched to see if Wrestler would pull out his beautiful cock to do the same. He did.

Pretty Boy didn’t need to go, but Cody saw the Colonel let out a very small stream. “That man knows not to miss any chance to eat or piss,” Cody thought.

As they took their water break Cody saw a man watching them. Pretty Boy saw him too; it was the gardener he had seen on the way to his Master’s trailer. At the time Pretty Boy was too terrified to think about the guy as a sex object for more than a few seconds, but now, no longer afraid of being hurt, that was all Pretty Boy could do.

Cody also looked at the guy in his dirty jeans and baseball cap and thought he looked like of of those hot rednecks from photos on the internet. Cody loved those photos, which usually showed some young guy holding a fish he just caught or posing with his deer rifle. For some reason the guys were always shirtless and they always had tight lean bodies with rednecky tattoos and a patch of hair between their pecs, or in a line down their abs. He remembered one particular photo of a hot shirtless guy holding a snake he just killed, and another of a thin but muscular guy proudly kneeling next to a dead alligator. The gardener looked just like one of those photos, Cody thought. He had the stance of a real man as he stood watching the boys, and with all the hard outdoor work Cody was sure he must smell fucking wonderful.

Cody noticed Wrestler staring at the gardener too, and why not.

And then Cody saw Wrestler pour some of the water in his bottle onto his smooth chest and slowly rub it over his pecs and abs.

“What. The. Fuck,” Cody thought. Wrestler was posing for the gardener. Jeez.

Cody just rolled his eyes, picked up his shovel, turned away from the gardener, and started to dig.

The boys dug for another stretch of time that felt like hours until the Commander announced, “Lunch break.” The slaveboy distributed a sandwich and a bottle of water to each boy and they ate and drank with their dirty hands. When the Commander saw that the boys had wolfed down their sandwiches he ordered, “Back to work” and the boys resumed their digging.

Eventually the trench was finished. The Colonel at the far end and Wrestler in the middle had dug their way toward Pretty Boy between them, doing most of Pretty Boy’s work for him. Wrestler had been showing off for Pretty Boy, leaving Cody to dig almost all the trench between himself and Wrestler. Cody just shook his head. But the job was done and when the Commander announced to the group, “Back to the dormitory,” they were the sweetest words Cody could imagine.

They shuffled in their leg shackles back toward the dormitory but the Commander stopped them just outside the building. The boys were a mess, covered with dirt and mud and sweat. Alpha removed the leg shackles from their boots and the Commander told them to strip.

The boys threw their dirty clothes and boots in a pile and the Commander ordered them to line up, put their hands behind their heads, and spread their legs. As Cody put his hands behind his head and spread his legs Alpha grabbed a garden hose attached to a tap on the outside wall of the dormitory. Alpha sprayed a powerful stream of water on Cody’s feet, then up his legs, then on his open crotch, and then up his stomach and pecs and straight in Cody’s face. Cody closed his mouth and eyes but as the water hit his nose he felt like he might choke. But even with water in his nose Cody kept his hands firmly behind his head; he did not want to piss off the Commander or Alpha; Cody knew his back was sunburned and the thought of a flogging terrified him.

Alpha hosed the dirt off the front of each boy one by one and the Commander ordered them to turn around. Cody immediately thought of his sunburned back and clenched his muscles, dreading the hard stream of water on his back. Cody’s relief was immense when he felt the water hit the bottom of his legs; Alpha had adjusted the nozzle to a soft spray and Cody breathed deeply with relief.

After they were hosed down the boys were led back naked into the dormitory and told to put on the prison uniforms they had left on their cots that morning. Cody dressed, lay on his cot, and felt exhaustion in every muscle.

This story is copyright © 2020 by AlphaMetal@Protonmail.com and is posted to the Metalbond Prison Library with permission. 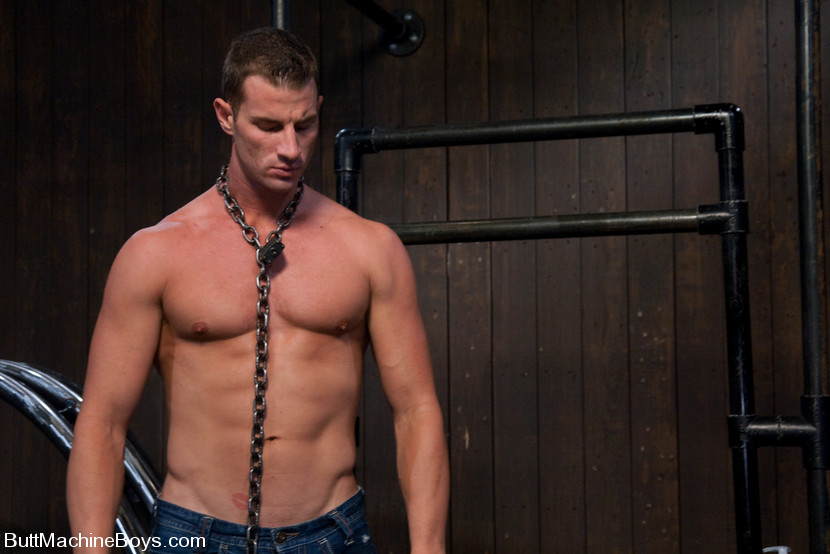 2 thoughts on “Training Week at the Campground: A Novel – Part 09”