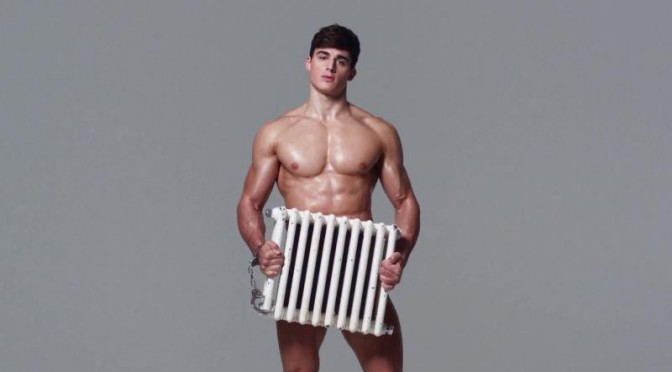 I got my first gig in the New York fashion industry when I was seventeen. I stood outside the entrance of Hollister on 600 Broadway in the summer months wearing sunglasses and swim trunks to bring in foot traffic off the street. I smiled and greeted all the girls entering the store and also their wary boyfriends.

I was still only nineteen when I got the first big break that was going to launch my career as a fashion model. I auditioned and scored a really high profile holiday ad campaign for Equinox. You might remember me – if you got one of those postcards in the mail last December? It had a color photo of a buff naked guy standing with a big smile, chestnut hair, and carrying an old-fashioned steam radiator chained to my wrist, tastefully hiding my junk. It said, “Happy Holidays from Equinox! We hope you like nothing.” Then on the back, it had a coupon for a zero first month down payment on a membership. That was a very successful campaign for them, and they really liked me. When it ended, I started asking my agent if he could, maybe, on the strength of it start sending me out to try for something more ambitious, like a Calvin Klein billboard or even a Nasty Pig. I would smile sweetly and knock out the next closest model with a baseball bat if it got me an underwear ad. However, men’s fashion is a very competitive business. In the try-outs for Calvin they said my bulge was too big; so, that door didn’t open for me.

END_OF_DOCUMENT_TOKEN_TO_BE_REPLACED

Fluffypuff was supremely irritated. I could distinctly hear her little cat paws scratching at the bottom of the closet door. I could hear her pushing her front paws under the door and trying to stretch them out into the hallway, as if she entertained a desperate hope to somehow squeeze the rest of her fat fluffy body out through the crack. I could hear her pause, completely silent, pressing her face and her sensitive ears into the crack under the door to hear some sign. Fluffypuff desperately wanted to be free of the closet, where she had been locked away. I was powerless to help or comfort her, but I completely understood how she must feel being locked here in the closet all day with me. Cats don’t cope well with captivity.

Another stream-of-consciousness monologue begins inside my head. This helps me to keep my mind active. And, it is saying, “Fluffypuff was supremely irritated…”

Me? I’ve been locked in this closet for – I don’t know exactly – but the air had turned cold for a while, then damp and humid, then muggy, now just dry. The last specific day that I can identify was in February 2014 when I lost a Superbowl bet. I have ever since been confined here, and I know that was a long time ago. I am locked in a box with my head sticking out of a hole in the top of it. There is a thick padded collar around my neck where it comes out of the hole. The padded collar supports my head and neck all around and keeps my chin up.

END_OF_DOCUMENT_TOKEN_TO_BE_REPLACED

Welcome to Indentured – The game of sex, humiliation, pain, bondage and tedious labor in 3,162,510 combinations

I am pleased to present to you this non-refundable one-of-a-kind copy of Indentured – the game of sex, humiliation, pain, bondage and tedious labor in 3,162,510 combinations. Every individual copy of Indentured is unique, having been designed specifically for you by my game development team based upon a personality profile that you submitted combined with my own internal research about you. Your presences on all social media have been reviewed, including the ones where you use an alias. I also purchased and analyzed the records of all your recent search terms from Google. A tremendous amount of time and resources were devoted upfront to get an intimate picture of you before I delivered your game. So, please understand that’s why I can’t offer refunds. Realize that you hold in your hands a unique crafted item, which will not only entertain you with its practically endless variations in gameplay, but it will also relentlessly challenge you and expand your mind, if you follow along and let it.

END_OF_DOCUMENT_TOKEN_TO_BE_REPLACED

“What a friggin’ ripoff. I was such a dumbass to fall for this.” I’d ordered the game online. When it came and I opened it up, it was an ordinary Poker deck with some typed instructions on paper stuffed in the bottom of the box. I was expecting something more like a disc I could play on my console, not a card game. This was not even a good card game. I wonder if anyone else was stupid enough to pay 50 bucks online for a Poker deck.

I didn’t even look at the instructions that go with it. I got online to the Indentured site and dashed off a flaming email to them about how this was a ripoff, and I wanted my money back. There was no immediate response, and I didn’t really think there would be. I might just have to eat this mistake.

I decided to also post these lame game instructions up on this bulletin board so that other people would be wise to it. Be warned!

END_OF_DOCUMENT_TOKEN_TO_BE_REPLACED 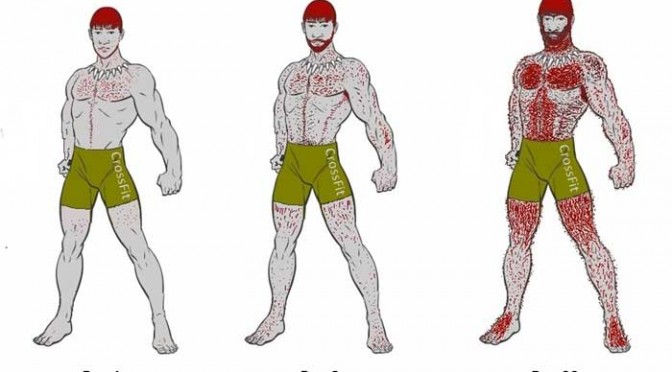 The bones of over four hundred neanderthals have been found to date. But, my roommate Garin is the closest thing to a living specimen.

My name is Adam, and I am a graduate student at The UCSC Paleogenomics Lab. Garin is my coworker at the lab. We spend just about every waking hour in the lab cataloging genetic sequences extracted from neanderthal bones. A huge open bone pit was discovered in the Atapuerca Mountains in northern Spain with the remains of at least 28 neanderthal individuals living there about 100,000 years ago – all of them male. It is a puzzle why there were so many males found living in one place together with no females. Garin and I analyze the bone fragments that our group leader sends back from the field.

Part of what’s done with them is to sequence genetic material in the bone fragments. Several research teams, including our team, had sequenced the genome of homo neanderthalensis.

END_OF_DOCUMENT_TOKEN_TO_BE_REPLACED

I hear but don’t see him come in. My blinders are on. He asks if I’d like a drink of water or anything, and I move my head up and down. Of course I do. I’m often thirsty and hungry and feeling dehydrated and can’t afford to miss a chance for a drink. He feels my forehead to see if I am warm. He pats my head.

I’ve been boxed up most of the day. I mean this literally. I am locked up in a box with my head sticking out of a hole in the top of it. There is a thick padded collar around my neck where it comes out of the hole. The padded collar supports my head and neck all around and keeps my chin up. I can move my head up and down a little for “yes” and right and left a little for “no.” The other one thing I’m allowed to do is sniff with my nose. Two sniffs means “thank you.”

END_OF_DOCUMENT_TOKEN_TO_BE_REPLACED

Mica surrendered his penis to his yoga instructor.