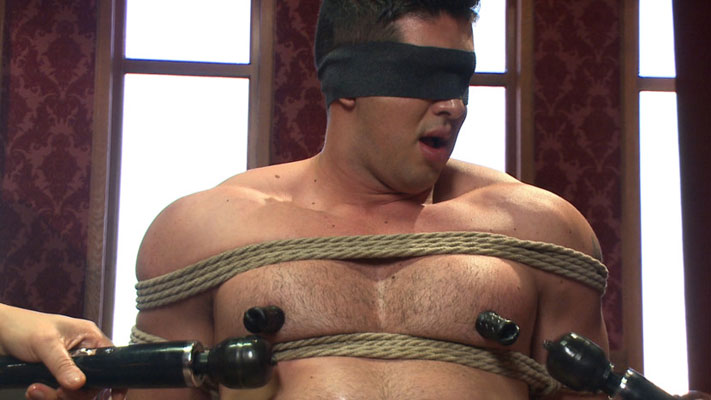 Liam Santiago is a straight stud who’s never been with another dude before, so they start him off with a blindfold to calm his nerves as he’s bound in the chair. John Jammen teases Liam’s nipples as Van whips out the stud’s uncut cock. They get him rock hard before putting tit suckers on his nipples, while driving him crazy with the hitachi’s. Standing up, Liam is bound with his hands behind his back as Van shoves John’s head down on the stud’s cock until he’s just about to blow. Back in the bedroom, Liam is bound to the bed as the two pervs tease his cock and finger his hole. Liam is tied down onto the bed, blindfolded and gagged while his hard cock slides in and out of the fleshjack. After relentless edging, Liam finally blows his cum onto his stomach before he’s finished off with some post-orgasmic tickling. Here’s another one from Men On Edge:

Jay Rising — Straight stud with a giant cock relentlessly edged against his will: