James woke on his 21st morning to a blaring alarm – as per usual – and a pleasant surprise – so far the only truly pleasant thing that has happened to him since he got here.

The cell door opened to reveal two men – Arnold and someone who looked like the sergeant-type guy who read him the rules, except he had a beard that made him seem more friendly.

“Slave, meet Russell. He’s the one who’s gonna deal with your hair every two weeks, though I messed up the scheduling so you’re gonna get a trim next week too, and then it goes back to normal again. He’s also helping me do a few things in my job.

“He’s been here a long time. Knows what he’s doing.”

Seemed. Arnold seemed easy-going but all James has gotten from him are punishments. Since these two were cooperating, there was no reason to conclude at this juncture that Russell would not follow suit.

Instinctively, James opened his mouth to say “thank you sir,” but the punishment the week prior – which mandated silence from him – did its number, and he stopped himself.

“Is this normal for him?”

“He’s scared of getting new punishments,” Arnold turned from his companion, and raising his voice, said, “you can talk now, slave!”

James’ voice was weak. He had not spoken in a week, and he had a serious case of morning voice to go with it. Besides, this was not to mention how he had associated talking with penalty.

To be fair, anything he did could warrant another punishment if Arnold so chose, such were the terms he agreed to.

A suspension bar was lowered from the ceiling, to which James’ hands were secured. The bar was guided to the nape. A rope around the neck and the bar would ensure it stayed there for the session. The setup was raised so that his back was upright, but he was still on his knees.

All left other than Russell.

Immediately, he set about removing the slave’s blindfold, gag and mitts. He sat in front of him, legs crossed.

“So how’re you feeling?”

“Rule two, you must listen to staff commands, so here. I’m a member of staff, and I’m ordering you to talk with me, and really be honest.”

James’ inkling that Russell was friendly was correct. He sighed with relief, and a touch of melancholy.

“The thing is, sir, I don’t know if you’re telling Arnold all this. I really don’t want another punishment.”

“You know what? Personally I think he’s treating you way too harshly. This keeps up and you’re never even gonna see the key to your cage.”

Russell got up and went to get his kit. He returned with some towels and some basic equipment for a haircut. He drew up a stool as well.

Instructing James to fall back slightly to raise his knees off the ground, Russell quickly slipped in two of the towels, folded up to allow for more cushioning.

No problem. James immediately felt a rush of warmth in his chest, and decided this was someone he could confide in.

It has been more than three weeks and this was the only time he has been treated well. These towels, that follow-up response to his “thank you” – rare comforts.

As Russell started on the backside with his clippers, he explained to James why he was there.

“So Director Preston originally got me on board as a hairdresser and I’m unofficially the counselor for the staff. They can’t like making you suffer so much that they forget to keep you alive and kicking.”

Russell chuckled and shook his head.

After a short breath, he started explaining the facility, deliberately slowing his progress dramatically to make more time.

“Not if you consider how we’re in the middle of the Mojave. We’re hours away from everything so everyone lives here. We even have a resident doc who’s gonna check on everyone once a month, and that includes you.

“We can’t rely on whatever city’s grid to run this place. We generate our electricity with an array of solar panels.

“As for water, we have lots of it in underground tanks. There’s a collection system for rain on the roof, and there’s a recycling system for everything; the showers, the sinks, even the toilets. It’s weird but we piss and shit in different toilets so that we recycle the piss while we flush the shit to compost bins where we use it to make fertilisers.

“Oh yeah, there’s a giant greenhouse-like farm a mile off that feeds this place and sells off the extras as a side hustle.”

“But what about me? Why do I use just the one toilet?”

“Make things simpler for you.”

James listened and processed this information in awe.

“We don’t get much of anything, and the only really nice things we get are surprisingly good Internet and radio. Video games too, if we’re somehow not spent after working the whole day.

“We buy in bulk what we can’t farm, like meat and grain, and we keep it in a refrigerated cellar the old-fashioned way. Some chefs ration and prepare it for us in the canteen, which you won’t see. And very rarely, if we’re feeling it, we send someone out to get beer.

“I don’t support them doing beer runs, because if they wanna drink their troubles away they could just work them off in the gym. Or I could give them a haircut, if they’re in the mood for it.

“Beer ain’t good for you anyway.”

Putting down the clippers, Russell switched to a pair of scissors as he moved to the front, deftly trimming away small bits at a time.

“Wow.” This was all James said.

“Heh, this place is a massive science project, no?”

After a moment, Russell set down the scissors and grabbed a beard trimmer and a comb.

In silence, he trimmed the beard, dusted off stray hairs and manicured the nails.

As he finished, he looked directly and intently into James’ eyes.

“Now, Arnold said I’d do part of his job for him. That means checking on your training progress.

James was told to recite the rules, something which he had done perfectly since the second day with no trouble. No exception here, and he was rewarded with a pat on the back.

Again, with ease and possibly vigour, seeing as this was the closest to sex he had ever gotten to in the past three weeks, James complied. His skills had markedly improved, evident from the number of lashes he got during training steadily decreasing, and Russell’s satisfaction, though he would pull out before he came.

James was blindfolded before being released from the bar and guided to sit with his legs crossed for the last 20 minutes of time with Russell, who instructed him to treat the time like therapy.

James confessed what he was thinking, how frustrated he was with everything – physical or mental, being unable to make any inroads to any semblance of comfort, or just contentment in general.

“I can’t make your life easier. What Arnold wants to do is his business and you agreed that he’d call the shots on the punishments. All I can do is listen to you talk about your problems.

“At least you’ll have someone to talk to.”

A notification popped up on Russell’s phone, signaling that their time was up.

Fastening the ball gag back into James’ mouth and the mitts back onto his hands, Russell said, gently, “I’ll see you again soon, slave James.”

That was his name, “James.”

This phrase echoed in his mind as he was whisked away unwillingly.

The week passed by without a moment not thinking of his next meeting with his barber counselor – the only person who offered him a helping hand and not a lash on the back in this unfeeling prison in the middle of a sundering desert.

After the meeting on day 28, the schedule was normalised. He lamented the impossibility of seeing Russell more than once every two weeks. 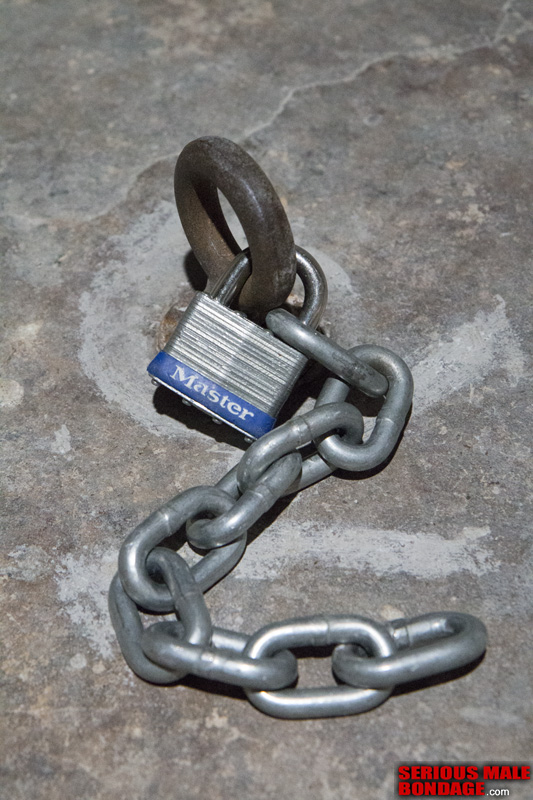