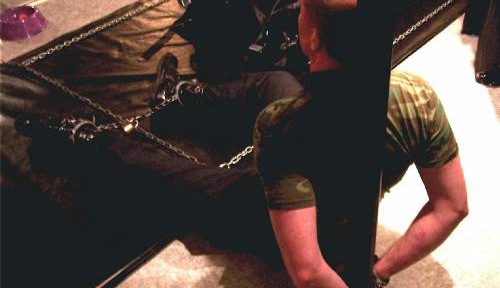 Some Metalbond readers have questions and want some help. Others have comments to share. See below:

I know your primary interest is metal bondage, but I’m hoping you can at least put me in touch with someone who can help me. Years ago (at least a decade), I came across a photo that I have fantasized over. I no longer have this image in my possession and really would like to track it down again.

It’s an image of a guy in denim, shirt unbuttoned to show a rope harness beneath. He’s beside a mud puddle and his lower body is covered in mud.

I believe it was partly associated with a story I had read which revolved around a bondage hunt where the subject was given a head start and his goal was to escape capture or be put into bondage. The guy lost.

Anyway, even if you can’t help me out, I hope you can point me in the right direction. Thanks.

I just blew my load reading the “Roger” series by David Sellers — one of the hottest stories I’ve ever read, maybe only second to “Ross.”  You provide a great service …. :-)

I’ll write for you again soon — just as soon as my life settles down a bit.

My novel is pretty much finished. I’m asking your readers if they’d be willing to read it for some honest critiqueing. I’ll send it to the first 3 people who send me an email at aqualaguy@gmail.com. Can you post something?

I don’t know anything about that play “Pig” – but it reads and looks interesting. Maybe something for your website??? https://buddiesinbadtimes.com/shows/pig/

There are one Sadistic, one Murderer, one Necrophiliac, one Zoophilic, one Pyromaniac and one Masochist. They are sitting in the garden of the psychiatric hospital. Without knowing how to occupy their time.

Bored, the zoophilic says: “Why don’t we fuck a cat?”

Then the Sadist says: “YES we fuck the cat and then torture it!”

Murderer Says: “YEEES! We fuck, torture the cat and then kill it!”

Necrophiliac Says: “OOOOH YEAAAAAAAAHHHHH! We fuck, torture, kill the cat and then we fuck it again!”

And say Pyromaniac: “YES, YES, YES! We fuck, torture, kill, fucking the cat back again and we set it on fire!!”

It makes a sudden silence, and everyone watches the Masochist and people ask him:

“What about you? Did not you say anything???”

And the Masochist says:  “MEOOOOWWWWWWW!”