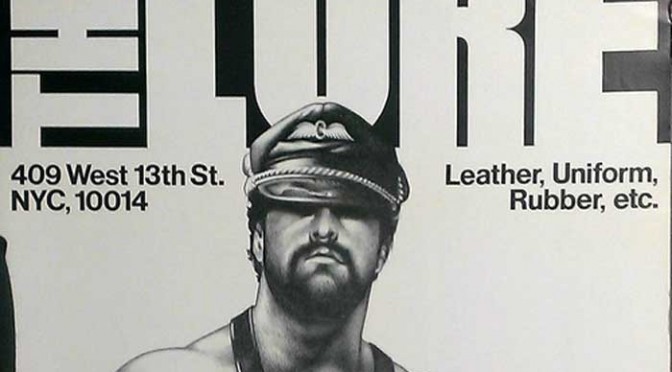 Does anyone remember  the LURE leather bar in NYC? I wrote the article below for GMSMA’s newsletter, NewsLink, back in 2003, after my favorite leather bar closed down. Farewell to the LURE

The LURE, New York City’s popular leather bar, closed on April 9, 2003, after nearly a decade of being the place to go for leather guys. GMSMA, the Renegades, Iron Guard and other local groups held bar nights at the LURE, and after the Manhole closed the bar became home to GMSMA’s Dungeon Demos. The LURE was also home to its own events such as the popular Pork on Wednesdays, regular rubber and uniform nights, foot fetish parties, and more.  You could shop in the Noose II store, and get your boots shined by the bootblack on duty.  The bar also popped up on HBO’s “Sex and the City,” when Samantha moved in upstairs.

The brainchild of the late Wally Wallace and bankrolled by a number of investors from within the community, the LURE (an acronym for Leather, Rubber, Uniforms, Etc.) opened in January 1994.   And while it did not actually turn a profit for its owners until several years later, leather men showed up in large numbers at the bar, which was jam packed every weekend in the early ’90s.

The LURE was a place to strut your stuff, to wear fetish attire of all kinds — leather and tall boots, cop or firefighter gear, rubber/latex, combat fatigues. Even guys dressed as gas station attendants were right at home there.  You could cruise for a hot leather daddy, collar a slave, or make out with a hot guy in the back.  And it wasn’t uncommon to see men there licking boots, torturing nipples, or even gulping down piss from beer bottles or glasses.

The bar was far from perfect — a dress code that was once enforced became somethig of a joke, as “tourists” and guys in sneakers would try to blend in with leather cops and rubbermen.  And that $7 cover charge seemed a little steep.  At least you got a ticket for your first drink.

As the rise of the Internet slowed business (who wants to schlep across town to pick up a trick when you can go online and “order in”?) attendance was way down, especially on Friday nights during the summer months.  When the Eagle re-emerged on West 28th Street, it drew many men away from the LURE, but most of the leather guys stayed.

In the end, some of the same forces that led Samantha to take that apartment upstairs contributed to the demise of the LURE.  Real estate in the Meat Market district became red hot as condos, nightclubs and restaurants started popping up like weeds.  The LURE’s lease was up, giving the landlord the opportunity to jack up the rent.  And when insurance premiums skyrocketed as well, it made the LURE’s existence at its West 13th Street location no longer finiancially viable for its owners.  There was talk of the bar relocating to a new space, but that turned out to be just talk.

Many of us will always have good memories of the LURE and the good times we had there over the years.   And we’ll also remember many of its former employees — Russ and John, the two bartenders who stayed with the bar for the whole run.  And Joey, one of the bar’s first managers, who was always there in full leather, rubber or fetish gear to greet regular customers with a smile.  And don’t forget Dominic, who with his tattoos and piercinngs was the most intimidating-looking doorman New York has ever seen.

So it’s the end for the LURE, at least for now.   It just goes to show that nothing lasts forever.  Just ask those who used to hang out at the Spike, the Altar and even the Mineshaft.