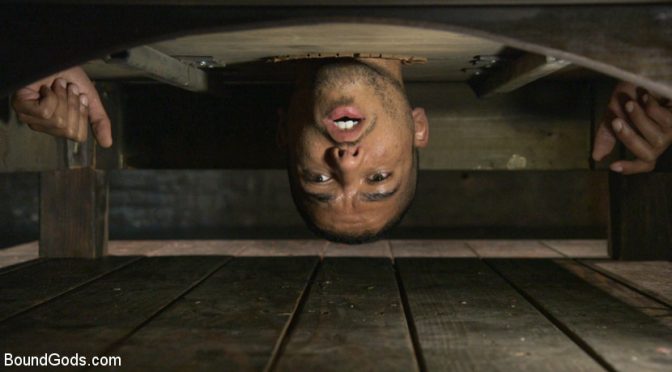 Click any of the pictures to go directly to the video: In this shoot from Bound Gods, Mike Maverick is slave #133, the new slave in Mr Sebastian Keys’ house. Mr Keys enters his new fuck slave’s cell and wastes no time playing with his hard cock. Mr. Keys tests his plaything’s ability to take a lot of punishment by tying him to the wall. Mr. Keys covers the pain slut’s tender body in clamps. #133 is able to withstand the intensity of the clamps long enough for Mr. Keys to reward him by whacking the clamps off with a crop. Mr. Keys then chains up #133, and unleashes his flogger on him. #133 begs for release by taking Mr. Keys throbbing dick down his throat. Mr. Keys then throws #133 off his cock and continues to flog him mercilessly. Mr. Keys likes to mix pain with his pleasure and gives #133 the privilege of taking Mr. Keys’ hard dick in his ass. #133 is locked in a stockade, while Mr. Keys canes him, while still pushing his cock down #133’s little hole. Mr. Keys approves of his new fuck slave and christens him with his hot cum. #133 is finally allowed to shoot his load all over Mr. Keys’ boots.