I’ve known Jake for several months online. We’ve chatted almost nightly but I’ve never had the opportunity to meet him. While he lives in the same city as me, Jake’s a trucker and his job keeps him away from home most of the time. When I receive his email saying that he will be in town Friday and would I meet him for lunch I jump at the chance.

Lunch goes well and we fall into an easy rapport like friends who have known each other for years. When the meal is finished Jake says, “Well – I have to get back on the road but first I have something to show you. Come out to the truck with me.” When we get to the truck he unlocks it and says, “jump in,” I climb into the cab and he takes his place in the drivers seat.

“Take a look in the sleeper,” he says. “I bought this with you in mind.”

END_OF_DOCUMENT_TOKEN_TO_BE_REPLACED 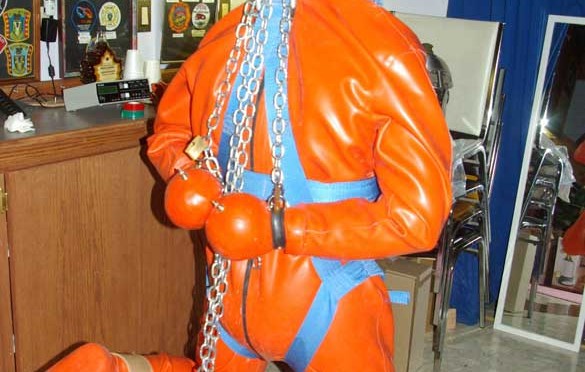 Having Fun With a Houseguest

I had a houseguest who brought several different outfits with him for me to try.  The one that really was my favourite was a Rubber Prison made by Studio Gum.  This incredible suit not only totally encloses the wearer in heavy rubber but also has locks built into every zipper pull so once in it you have no chance of getting back out without help.  Accessories include inflatable fist mitts, a number of different inflatable gags, blindfold and a gas mask that also locks onto the suit, rendering it impossible to remove the blindfold and/or gag.  Add a breathing restrictor or a rebreather bag and the possibilities are infinite.  The only thing I would change on the suit would be to add an air-tight zipper to prevent the sweat from leaking out.

I had decided to introduce my guest to electro that evening (I have an Erostek 312)  so I started off the evening by putting my guest into the Rubber Prison, with attached electro cock rings, a suspension harness and leg spreader bar all locked on.  He spent the next two hours just hanging around grunting and yelping as I played with the electro.  By the time I let him down he had a very good idea of how electro works.

As soon as he was let out of the suit the electro cock rings and a large, dual pole, butt plug was fitted to me then I was locked into the still warm and sweaty suit.  The suspension harness, fist mitts and spreader bar were locked in place and I was hung up with my legs pulled up to my back.  Just to up the anti an inflatable butterfly gag and blindfold were added and the gas mask locked on over them leaving me no other focus besides the ministrations of the Erostek.  I was left that way for two hours with the only changes being the varying cycles and intensities of the Erostek, the position of my hands and bouts of breath control.

When I was let down the mask, blindfold and gag were taken off and I was allowed to remove the electro but then the suit was locked back up and I was left to rest for an hour.

Then it was time for bed.  I was taken into the other room and helped into my leather combination sleep sack / straightjacket.  It was laced tight, the gas mask locked back onto the suit, then even tighter straps were all done up.  My arms were crossed and snugged down then every buckle (13 in all) had a padlock added to make sure I “slept tight”  I managed 3 hours that way then my own stupidity reared its ugly head.  Thinking of the lack of possibility of bathroom breaks I hadn’t drank enough before hand and dehydration started to create stomach cramps.  I was released from the sleep sack and mask and given ginger ale to drink, which settled my stomach again then was allowed to go to bed, still locked in the Rubber Prison.  I wasn’t released till after 10 the next morning for a total of more than 12 hours locked in the suit.  I LOVED it and really wish I could do it again, preferably locked in several layers of rubber sleep sacks this time.  Unfortunately, as the suit isn’t mine and the owner isn’t local there is very little chance of that happening again any time soon but one can always dream.  (Anyone else want to help with that one?)

I really want to give a heartfelt thanks to my guest for affording me the opportunity to try this and I hope that he enjoyed what was done to him that week as well. Thanks Collector2 for the pictures and information!

END_OF_DOCUMENT_TOKEN_TO_BE_REPLACED

I’ve been fascinated by the leather lifestyle and bondage for quite some time.  Unfortunately the few guys that I have gone out with have had no interest in it.  So I decided to try going to a leather bar I had heard about.  My first thought was “I don’t want to stick out” so a quick trip to the local B & D store saw me outfitted with leather pants and a harness.  I must confess that, even thought that is a fairly tame outfit, I felt uncomfortable in it.

END_OF_DOCUMENT_TOKEN_TO_BE_REPLACED

As I sit here, my back to the wall, I carefully survey the bar. I have very special plans for this weekend but they require the participation of the “right” candidate. So far no one suitable has caught my eye. Dressed in full leathers with a latex shirt I know I present an imposing figure. Very few even dare to approach me, which is the way I like it.