Nick slowly woke up and tried to stretch, but he soon realised he was still chained down to the bunk at the Dive Centre.  He really wanted to stretch, but the chains held him tightly in place on the bunk.  He looked around, and then the door opened. The Boss walked in.  He was wearing a pair of dark blue coveralls with the logo of the Dive Company on the left breast and heavy steel-toed work boots.  The boots thudded on the wooden floor as he walked over to the bunk.  Nick looked up and asked if he could get released so he could go to the bathroom.  The Boss nodded and leaned down and pulled the light blanket off Nick and unlocked the leather cuffs holding Nick to the bunk.

After Nick got cleaned up, they left the Dive Centre and headed to a nearby diner for breakfast.  The Boss told him to eat a big meal as he would not have the ability to eat again till evening.  Nick assumed that meant he would be going back into the dive tank and left there.  He nodded and looked over at the Boss and felt his cock arouse.  The short grey crew cut, the muscles, and the general build really got to him.

After finishing their meals, the two men walked back to the Dive Centre.  Nick was still wearing the clothes he arrived in, but he found himself wondering if he could get a pair of the blue coveralls like the Boss was wearing.  They walked into the Dive Centre, and The Boss led him to the gear area and told Nick to strip.  Nick quickly stripped off his boots and clothes and stood waiting.  The Boss brought over a package and told Nick to get up on the table and lay down.  Nick got up and laid down on the heavy table.  He watched as the Boss pulled on a pair of latex gloves and then picked up the package and ripped it open.  He pulled out a coil of tubing and laid it on Nick’s stomach.  He pulled out a tube of lube and opened it and squirted it into the piss slit of Nick’s rock-hard cock.  The Boss uncoiled the tubing and worked one end of it into Nick’s cock.  He kept up a slow but steady pressure as the tube slipped down into Nick’s cock.

Nick felt something pressing on his bladder, and then it slipped in and The Boss pushed a little further then stopped. He then picked up a syringe and pierced a fitting on the tube with it and injected the contents of the syringe.  Nick knew the liquid was most likely sterile saline, which would inflate the end of the tube to prevent it from being pulled out of his bladder.  The Boss put a clamp on the tube and then told Nick to sit up and get off the table.  Nick sat up and swung his legs over the edge of the table.  The Boss knelt and cut the tube and fitted onto a large clear piss bag, which he strapped onto Nick’s left thigh using a harness.  He stood up and told Nick that the catheter was going to stay in for the duration of Nick’s stay, and Nick nodded.

The Boss went over to where the insulated undersuit Nick had been wearing the day before and tossed it to Nick and told him to put it on.  Nick got into the suit and zipped it up.  He was then handed a pair of very thick wool socks, and he put those on.  The Boss walked over to a rack of gear and pulled a heavy white canvas suit down and walked over to Nick.  Nick recognized it as the suit usually worn with the heavy Mark V dive helmet.  The Boss spread the suit out and Nick inserted his legs into the neck opening of the suit and wiggled his body into the suit.  After a few minutes he got his legs into the suit and was able to stand up and between him and The Boss he finally got the suit on.  The sleeves had heavy mittens sealed onto them so he really had no use of his hands.  He shrugged and got the suit to settle better.

The Boss told him to sit down on the chair so he would finish putting the suit on him.  Nick sat down and the Boss walked over carrying the heavy brass collar and lowered it over Nick’s head.  The collar sat on Nick’s shoulders and Nick slumped a little under its weight.  The Boss worked pulling the heavy rubber seal of the suit onto the bolts on the collar.  There were 12 bolts on the collar, which held the suit and would provide the seal for the suit and collar.

The Boss brought over the seal plates and put them on the bolts.  He then picked up the heavy nuts and spun them onto the bolts.  Finally, he took the special wrench and tightened all the nuts and he used his strength to make sure the nuts were tight.  Nick sat there and looked down at the heavy brass collar bolted to his suit and knew that he was in the suit until The Boss decided to remove the collar.

The Boss told Nick to stand up and Nick did, staggering a bit under the weight of the brass collar and suit.  The Boss fitted a heavy canvas dive harness on Nick and the heavy single crotch strap was brought up between his legs.  He fed the strap into the buckle and tugged hard causing the strap to dig into Nick crushing his cock and balls.  Nick grunted from the pain but the Boss just nodded.

The Boss rigged the air lines and the communication lines and connected them to the heavy brass Mark V helmet sitting on the bench.  He picked up the heavy helmet and walked over to Nick who had sat down again.  The Boss lowered the helmet over Nick’s head and fitted it onto the locking threads on the collar and twisted it hard sealing the helmet to the collar.  The front view port was still open so Nick could breathe in air without the compressor being on.

The Boss instructed Nick on how to bleed air from the helmet and suit.  He was told to press his chin against the spring-loaded valve in the helmet.  Nick tried it and it seemed to work.  The Boss nodded and told Nick that it was important that he continued to monitor how much air was coming in as he could blow up and float to the surface.  Nick looked at the Boss and told him he would.

The Boss finished rigging the gear and then turned on the compressor.  He picked up the front view port and screwed it into the helmet snugging it tight.  He put on the head set and told Nick to stand up and walk over to the dive stage.  Nick struggled to stand up under the 150 pounds of dive gear he was wearing and thumped over dragging the heavy lead weighted boots.  He got on the platform, and the platform lifted up and swung over the dive tank.

The platform began lowering into the dark water and the air in the suit was compressed up into the upper part of the suit and the helmet.  The Boss told Nick to start venting and Nick quickly pressed the valve and the air was bled out.  Soon all that was above the water was Nick’s helmet and he stood on the stage wondering why the platform was lowering.  The Boss told Nick to vent the suit again as a precaution and Nick obeyed.  The Boss then told Nick to reach up and find the heavy air valve built into the air lines which was tied off over his chest.  Nick reached up and found the valve.

The Boss told Nick that by tightening the valve he would slow down the feed of air into his helmet and suit and this would help keep him from inflating.  But he had to be careful not to shut it down too much otherwise he would not get enough air to survive.  Nick told the Boss he understood and the stage began lowering again.  Nick kept his mittened hand on the valve and made small adjustments as he continued to sink to the bottom of the tank.

Once the stage thudded down, he stepped off and clumped over to the side of the tank and told the Boss that he was clear of the platform.  As before the platform raised up and disappeared.  He knew that there were no lights mounted on this helmet, so he knew he was staying in total darkness.  He moved slowly around the tank and found the bench and sat down which eased some of the weight of the helmet.

The Boss told him that he was down and would stay down for an extended period of time, and Nick asked how long and the Boss laughed.  Suddenly a dim light flashed on that was mounted to the side of the tank so there was now enough light for Nick to look around the tank where he was imprisoned.  His cock got rock hard despite the catheter inserted in it.  He rubbed his crotch pressing against the tight harness strap and the heavy rubber and canvas suit.  The air in the helmet smelled of rubber due the rubber lining of the air lines feeding his helmet.

He wondered how long the Boss would keep him locked down in the tank.  He sat back and rested his head against the cold metal of the back of his helmet.  He closed his eyes and just enjoyed the feeling of the suit and helmet and the pressure of the water pressing down on him.

He knew he was in bondage, but there were no chains or cuffs on him.  The sheer weight of the water and the heavy diving gear he was in was the bondage equipment.  He knew the Boss would protect him and get him up if he got into trouble.  He sat there and then he saw movement and he looked as the Boss in Scuba gear swam into view and came over to him.  The Boss motioned for him to stand up and the Boss swam over to a section of the tank wall and motioned for him to come over. Nick clumped over and the Boss picked up a length of chain that was hanging from a welded shackle on the tank wall and quickly looped the chain around Nick;s wrist and padlocked the chain.  He then swam over and pushed Nick hard against the tank wall, and while Nick stumbled against the wall the Boss chained his other wrist to the other side of the tank.

The Boss swam back and hung motionless in the middle of the tank.  He then nodded and headed back up to the surface, leaving Nick chained down to the tank.  Nick was stunned and struggled against the chains, but he was held firm.  After a few minutes, The Boss came on the headset and told Nick to relax and enjoy the bondage.  There was a click as the communication system turned off.  Nick stood there, his mind reeling from what just happened and his cock rock hard.  He could feel pre-cum dripping from his cock head around the catheter tube. He stood there knowing he was even more of a prisoner.

Metal would like to thank Rubrig for this story! 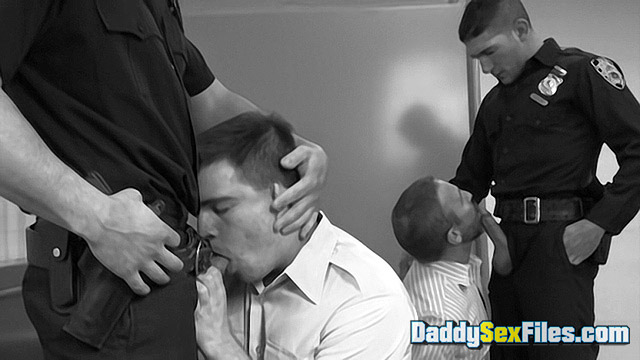