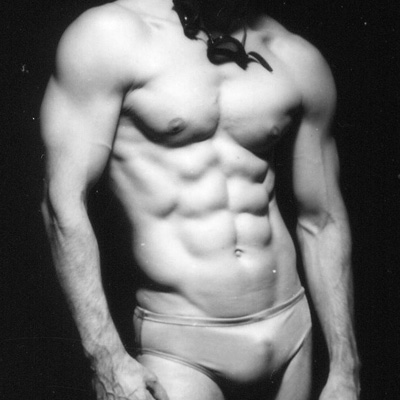 Seth did as he was told. He liked doing what he was told, even though his cock didn’t seem to need any help getting or staying hard. The ED cocktail was chalky with a faint taste of cherry. Seth wondered how long it would take before he felt anything. He didn’t have to wait long. Before the 3 minutes were up, he felt as though his cock was being forced to get even harder. He had never felt anything like this. He had lost all control over his cock. He liked having no control. He proceeded to B-3 and had to walk outside in the hall from B-2 to get there. His clothes had already been put in locker. Creighton told him he wouldn’t seem them again until the assignment was over. Thus, he had to walk through the hall from B-2 to B-3 nude and extra hard. Seth actually looked forward to this.

He entered the now familiar pressurized room and closed the pressure-sealed door. As soon as the seal engaged, audio instructions began. The disembodied voice told him to put the helmet on and be sure it fit snuggly and properly. Seth complied. He knew the drill. It announced that depressurization had already begun and would be concluded in 6 minutes. Same old, same old. It then announced he should move into the laser chamber. He would be asked to assume two positions, including the same position he had just shown Creighton and do so on the circular platform that had not been in the chamber during his prior visit. Also he wondered how the announcement – which must have been prerecorded – could have accounted for the pose he had assumed just 10 minutes ago. Nevertheless, he of course complied.

END_OF_DOCUMENT_TOKEN_TO_BE_REPLACED

Seth affirmatively responded without hesitation. He did want to hear more. He tried to suppress any apprehension about what additional expectations and requirements came with the “higher tiered work.”

Having gone through precisely this discussion with countless young guys before, Creighton loved the combination of ambition and fear that kept them listening without knowing what would be in store for them. He got off on the power this gave him over them. They were so easy to control and manipulate it almost wasn’t challenge any more. And this one seemed especially worthy. He had a superior body and the right attitude. He would fetch a high price and bolster Creighton’s brand.

Creighton began explaining that the additional requirements of tiers 3 and 4 were straight forward, but again, not for everyone. Tier 3 required the sketch model to be hairless from the neck down. Like an uncontrollably excited student who happens to be the smarted kid in the class and raises his hand immediately to broadcast to all that he knows the answer the teacher’s next question, Seth interrupted Creighton to remind him that competitive swimmers – like he had been – shave their bodies before swim meets. Though he hadn’t done that in a while, this wouldn’t be a big deal for him. Offended by the interruption, Creighton disdainfully explained that he wasn’t talking about shaving. That wasn’t good enough for the higher tiered work here. Seth was confused. Did Creighton mean body waxing? Seth had never done that, but he would be willing to try it, perhaps. Seth took care not to interrupt Creighton again and waited for him to explain further.

END_OF_DOCUMENT_TOKEN_TO_BE_REPLACED

Seth needed money. Well, more accurately, he just want some “walking around” cash so he could continue to socialize with the other college students who never seemed to care about the price of anything. That description fit maybe half the students at the elite New England college they attended. Seth belonged to the other half. His background was middle class. And he and his parents were pretty tapped out just keeping him in this obscenely expensive school. A little extra cash would help.

One day, after sitting through a brain-numbing solid-state physics class, he passed a room that seemed configured for an art class. Outside the door of this studio was an ad seeking male students to pose for a “live art” drawing classes, and most importantly, offering what seemed like an unusually large amount of money for something like this. Seth had no idea what the going rate for “something like this,” but he thought prospect of posing for some art students might even be fun in addition to providing some money.

The ad did warn that preferences would be given to guys in good physical shape, and noted that models could select among “tiers” of semi-nudity and nudity to track their particular comfort level or preference.