As soon as he said “compete”, Brian knew that was exactly what he wanted. If only he wasn’t gagged, so he could ask them about the “juice”. As he groaned into the gag, Dave walked back in and stepped between the two muscle men. “Hey, lad, I see you’ve met the Twins.” He smiled at each muscleman and gave each one a long lingering kiss. “Don’t worry, they’re not real twins – they just do everything the same way. The twins had a friendly chat with Dave and then left, leaving Brian alone with him. He reached up and unlocked the neck strap and gag. “The padlock on the neck strap stopped people taking liberties – well, maybe not too many liberties. Have you enjoyed yourself, lad?”

“Fuck yes.” There was a pause. “Fuck yes, Sir.” “That’s better.” Dave started to unstrap Brian, talking as he did so. “Shame this place won’t be open much longer. Some developer is buying this whole area to build a shopping centre.” Brian was hardly listening as he was released, rubbing his muscles to get the blood flowing fully again and looking at the marks that the straps had left on him. “Don’t know where people will go for this kind of fun when that happens.” Brian made a non-committal grunt as Dave led him back to the bar, which was now quite full.

Dave patted him on the back. “Right. I have some friends I need to talk to. I’m sure you’ll find someone to play with – if that’s what you want.” With that, Dave headed off. Brian was unsure what to do – he felt drained after the bondage, as well as excited. While he wanted to stick around, he wasn’t sure it was a wise idea so he headed back to the hotel.

He sat in front of his computer and called up a few sites. Two hours later, his research was finished. He had made some purchases and a lot of research – he now knew a lot more about bodybuilding competitions. He turned on the blu-ray and went to sleep.

The next day, the meetings went as before. He was still missing things and Quentin was picking them up each time. Brian could also see that Quentin was also desperate to talk to him about something. He could barely contain himself until after then first meeting finished, but he did so. As soon as everyone else had left the room, he came up to Brian and slammed a sheaf of papers on the table. “What the hell is this? Why are we buying real estate?” Brian looked at him calmly and sipped his protein shake. “It’s an investment. I’ve purchased them as Ormerod is looking to build a mall there.” Quentin paused. “Oh. So we’re going to let them jack the price up and make a huge profit.” He nodded. “Very astute.”

“No. We’re not going to sell. Ever.” “WHAT?” Quentin started to yell, only stopping when Brian leant forwards, grabbed him by the front of his shirt and lifted him off his feet. “Quentin, I tolerate you due to your efficiency, but never forget that this is MY FUCKING COMPANY.” He dropped Quentin down into his chair. “And never forget that I can fire you, Quentin. Now take my next meeting.” With that, Brian headed out.

He had no real plan for what to do, but he had got so enraged with Quentin that if he hadn’t left, he would have punched him. He stormed down to his car, made a choice and then headed for Cuir Experience. Parking up, he confidently pressed the entry buzzer and then walked in. Dave was behind the counter and smiled as he saw Brian. “Back again so soon? You are keen. What are you after today?” Brian walked up to him. “I have absolutely no idea. I just wanted you to know – Boltz is safe. The building is now owned by someone who won’t sell it.” Dave looked at him, one eyebrow raised quizzically. “Really? Who?” “Me.” Brian smiled at the shocked reaction. “Damn, Brian, I should have told you I wanted a Porsche! Now that requires a celebration – and a big reward for Brian.” The tone of his voice changed. “Go into the changing room, strip and wait for me there.”

Brian hesitated, then did as he was told. He stood naked in the changing room until he heard Dave’s footsteps approaching. The curtain was pulled aside & Dave thrust a leather item at him – a pair of leather chastity shorts. As Brian loosened the straps, Dave scooped up all of Brian’s clothes and took them away. Brian pulled the shorts on and tightened the straps on each thigh. He pulled his cock and balls through the front hole and secured them there with a small leather strap. He then zipped the front up, trapping his cock against him and tightened the belt. There were clear locking posts for padlocks, but he didn’t have any so he headed out to find Dave.

As he walked up to the counter, Dave was putting Brians clothing into a plastic bag which he then locked in the safe. He pointed to a container under the counter “I’ve put your phone, watch and keys in there so you’ll have them should you decide you want to leave before the safe unlocks.” “Unlocks?” “Yes. It’s got a security timer so can’t be opened until tomorrow morning.” Before Brian could ask anything else, Dave stepped out from behind the counter and tightened the belt and straps on the shorts. He then added padlocks, before rubbing the bulge that Brian’s cock was making in the front.

“You know what these are?”

Dave had clearly put people in the jacket before and he swiftly pulled it on before going behind Brian to secure it in place. He pulled the material together as tightly as it would go before securing the straps that held the jacket in place. Dave could see himself in the mirror and enjoyed the sight as the leather tightened around his torso. When he had the straps tightened to his satisfaction, Dave secured two crotch straps and then took a handful of padlocks and locked Brian into his leather prison. He then crossed Brian’s hands across his chest and secured them behind him, tightening the strap so that Brian couldn’t move his arms. A final strap around his arms at the front as well as ones over the biceps ensured Brian could not move his arms at all. Dave grabbed the D-ring at the front of the collar and pulled Brian in for a deep kiss. “How does that feel, lad?”

“You really are a good lad. Should I add these to your bill?” Brian nodded and watched as Dave rung up the amount on the till. “What’s your PIN?” Brian hesitated, then gave Dave the number. Dave smiled at the way the corporate executive was complying. “That’s convenient. I have some other items that I can add as the day goes on. Follow me.” Dave headed into the bondage area, trusting that Brian would follow him – which he did. By the time he walked in, Dave had selected a heavy leather muzzle from the display. “Open your mouth.”

Brian complied, then wondered why that would be necessary for a muzzle. Then he saw the thick cock gag inside the muzzle, before Dave slid it into his mouth. He then expertly strapped the muzzle in place and secured it again with a set of padlocks. Brian groaned as his mouth was filled and his head was restrained. “Should I add that?” Brian nodded without hesitation. “Good. Now to find somewhere to keep you safely while I work.” Dave led Brian to the back of the shop, where the larger bondage items were on display. “Sit there.” He pointed to a high backed steel chair that was on a pedestal. AS he walked up to it, Brian could see that it had a central hole in the seat and a metal contraption underneath it. Before he could look closer, Dave pushed him into the chair, pausing only to reach behind him and pull down the rear zip of the chastity shorts.

Dave started the slow process of securing Brian to the chair using heavy leather straps at ankle, shin, thigh, waist and collar. He then took two lengths of chain and, pushing them under Brian’s arms, secured them in an X shape across his chest, pulling him back firmly against the chair. “Like the chair, Brian?” Brian nodded and grunted around the gag. “Want to get the full experience?” Brian paused as he didn’t know what Dave was referring to – then he nodded. Dave grinned. “Good lad.” He went away and came back with a dildo that he removed from the packaging and then lubed before reaching under the seat. Brian expected to feel it pushing inside him, but instead Dave stood up and took a step back.

(lthrjock updated the above while wearing a posture collar, chastity cage and heavy handcuffs following orders from Metalbond) 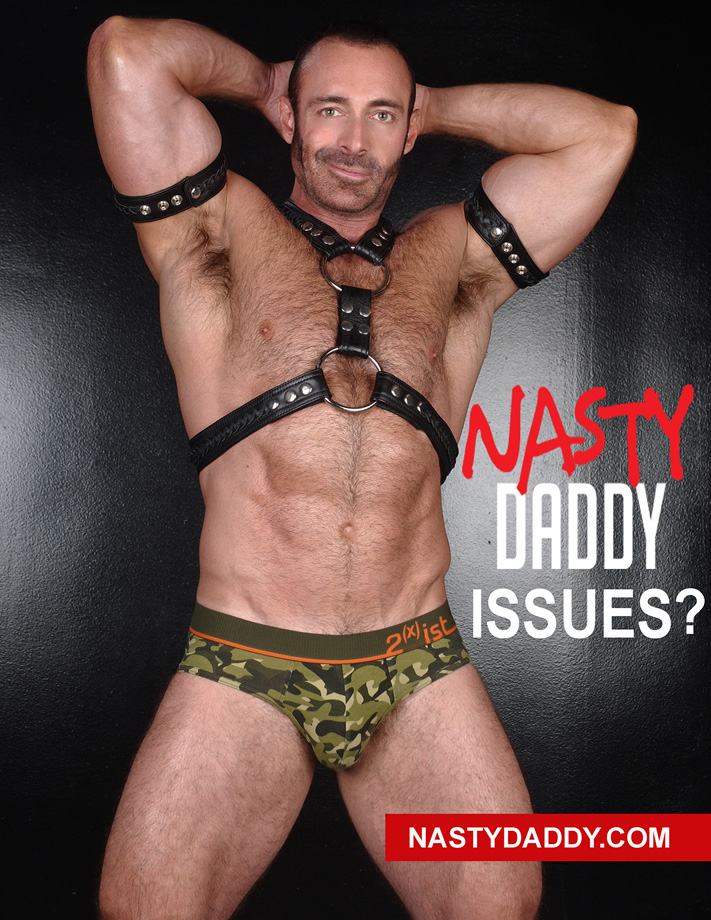