Hey prisoners! Are you enjoying ‘The WORC Program’ story series that has been running in the Prison Library? For those who can’t wait to find out what happens, here is a clue: There will be 26 chapters in all — with a new part coming later today.

All the chapters are available by clicking here.

Meanwhile, author Joshua Ryan sent the picture below, which he says is what the Workie uniform looks like! Ecxept minus the all-important name label: 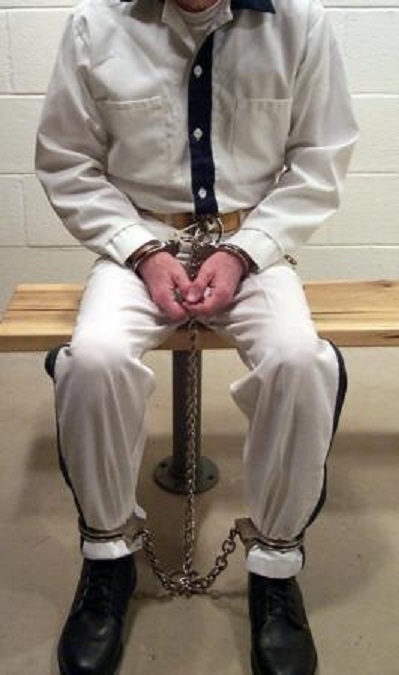 How many of you guys can picture yourself wearing a uniform like this?

Boss Web showed me to my new rack. This time it was a bottom, because Biff was gone. Biff was the one they sent up to the House to replace me. I don’t know how the boss chose him; probably because he was the faggiest and most worthless one he could think of.

Everybody seemed OK with having me back. I was another pair of legs on the coffle, and I wasn’t Biff. Their main idea was to make sure I was still just another workie like them. Of course the news had traveled about Mr. Hamilton’s “friend” being my “friend” before I put on the workie suit, and the decision that the kangaroo court had made, but I had to be stripped of any specialness that the story gave me, so everybody could see how I took it. It started right away. “Too bad brah! You’re back in the minor leagues.” “The problem with aging.” “Harem boys don’t last that long.” “Shouldn’t have changed your hairstyle.” “Another bad career move.” And a lot more.

END_OF_DOCUMENT_TOKEN_TO_BE_REPLACED

The rest of the winter … What happened? Nothing. Not even another trip to the bedroom. Bottom line: I was still a workie. I was still a house servant. I was owned by the current partner of my former partner. They had their breakfast, lunch, gym, dinner, movies, friends. I cleaned up after them. I also got up on the long ladder and dug out the gutters. I dragged the dead possum out of the storm drain. Cicero paddled me for stealing a cookie that was supposed to go on Jerry’s birthday cake. My only hope was that Mike and Jerry were hazing me, using me, shaming me, until one day they’d decide to let me go. If I could have shamed myself more, I would have, just to get this to end. I would have worn a leash every day. I would have slobbered at their feet. I would have begged them to rape me. But maybe that would just have made them want to keep me. Yeah, and maybe their favorite way of torturing me was to let me think they’d forgot all about me.

END_OF_DOCUMENT_TOKEN_TO_BE_REPLACED

I woke up the next day, and I was still a workie. The other workies knew what I used to be. My former friends knew what I was now. But nothing had changed. Nobody actually cared. After all, I was just a workie. I was a workie the day before; I was a workie now; I would always be a workie. Unless this was all a fuckin nightmare, and I was about to wake up. Or unless Mike and Jerry were gettin their rocks off, shaming me and hazing me, and when they got through, they would throw me out. That was my only hope.

I went back to washing the floors and scrubbing the toilets, and the other workies went back to whatever. Marky and Mr. Meyers took me on their little trips into town. I got better at slogging workie suits from the washer to the dryer. The nights got cold, and the boss brought out a stack of colorful quilts for us to use on our beds. I was ready to puke, it was so faggy. I slept under my ratty old workie blanket, and froze.

END_OF_DOCUMENT_TOKEN_TO_BE_REPLACED

Back at the House, the atmosphere seemed to be changing.

Everybody noticed it  — things were different. Cicero was snapping at everyone, at least everyone whose existence he noticed. Sacky complained about “these constant ALTERATIONS in my menus” that were made by Mr. Hamilton and Mr. Thomasen. Marky complained about being rousted “in the middle of the night” — meaning his jerk-off time after dinner and Sacky’s kitchen wine — and having to drive Mr. H and Mr. T to the Parrot Lounge and wait in the car till they “came out with something or other,” a something that spent the night in their bed and was returned to obscurity the next morning, “after stinkin up my car.” Then it all stopped, as suddenly as it started. The Misters decided to try something else.

Late one afternoon, right before dinner, a new workie arrived in the back of a truck and was hauled out of its cage and led to the barracks. Its name was Jody, and it was a very cute young man, or had been before it got put in a workie suit. Clearly, it had done service in some other venue besides Hamilton Farms: there was fuzz on its head, and it still had eyebrows. But it had big brown eyes and a nice slender body. This was no field hand. Wherever it had been, it had been given easy treatment. To its body, anyway. The brain might be different. Its eyes were scared — very scared. Which is normal, when you’ve just been shipped somewhere in a cage. Cicero stood in the door of the barracks and told Nob to “take off its hair and move it up to the House. That’s where it’s gonna live.”

END_OF_DOCUMENT_TOKEN_TO_BE_REPLACED

So I spent a lot of days sweeping the drive and swabbing the terrace and crawling around getting all the dirt out of the travertine in the foyer, and lots more days hefting 65-percent-polyester-35-percent-cotton workie uniforms out of the washing machines. Not much to say about that. But I do want to talk about a special feature of this phase of my career, which was getting to leave the estate from time to time.

It was sort of like when I was in the coffle—they’d take us out for road work, but afterwards they’d bring us right back to the fences and the razor wire. This time, I was the most expendable part of the crew, so I was the one that was “permitted to accompany” Mr. Meyers and Marky on their shopping trips to town. Marky drove the SUV, and Mr. Meyers rode shotgun, and I was the package-carrier that rode in the back. Marky was a hot young workie and Mr. Meyers — who the workies called Mr. Nance, or just Nance, or Nancy — was always making comments that Marky was careful not to pick up on.

END_OF_DOCUMENT_TOKEN_TO_BE_REPLACED

I thought maybe the workies in Grounds would resent me for going up the ladder like that, but all they said was stuff like “Wish I could go with you — not!” and “Enjoy all the fags up at the House, mofo!” The only resentment I saw was when I passed Benson coming out of the house servants’ barracks and heading for Grounds. We were both carrying our boxes of gear, but I was happy and he was mad. At me.

So now I guessed I’d be seeing Mike and Jerry every day — which was completely gross, right? I mean, it even made me sick to my stomach that I was looking forward to a thing like that. But how could I get back to real life if they didn’t help me? And why would they want to help me if they didn’t remember me? And how would they remember me if they never even saw me? And maybe they’d satisfied their sadism and wanted to get this shit over with, finally.

END_OF_DOCUMENT_TOKEN_TO_BE_REPLACED

Here’s the way the place was organized. Jerry had a big “staff.” At the top was this Meyers guy, Steven Meyers — MISTER Meyers, the “personal assistant.” He wasn’t a workie. Maybe he should have been, but he wasn’t. I saw him from a distance, and I knew he was a faggot. The kind of faggot I’d been. Only I guess he needed a job. He slept in the House.

Everybody else was a workie. There were three types of workie.

First: House Staff. They were the head servant, Cicero, and the cook, Sacky. Cicero lived in the House, up in the attic. Sacky lived in the barracks, but he kept whatever hours were needed to satisfy the owner. He was the way we got all those great leftovers, and things that weren’t leftovers.