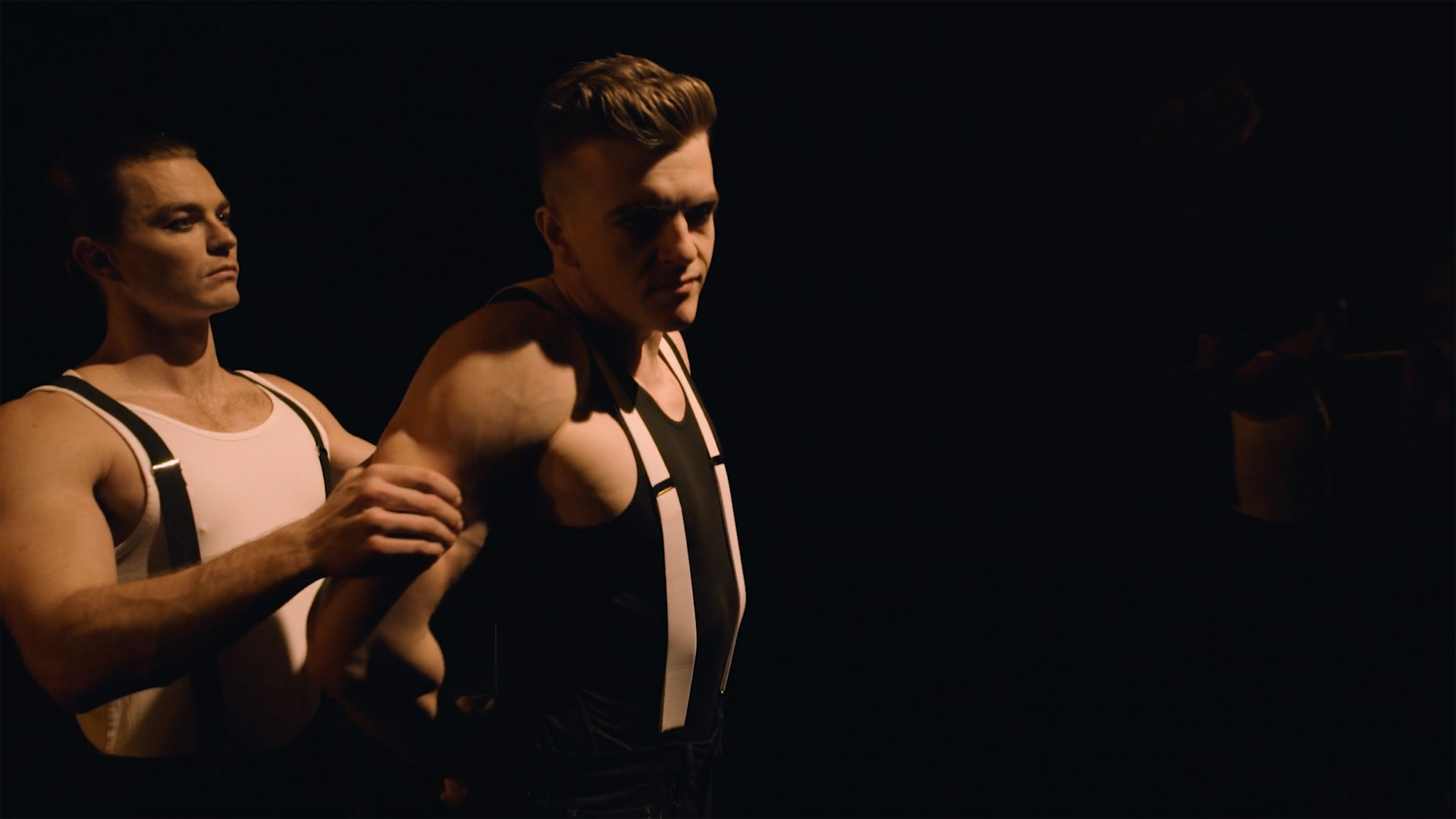 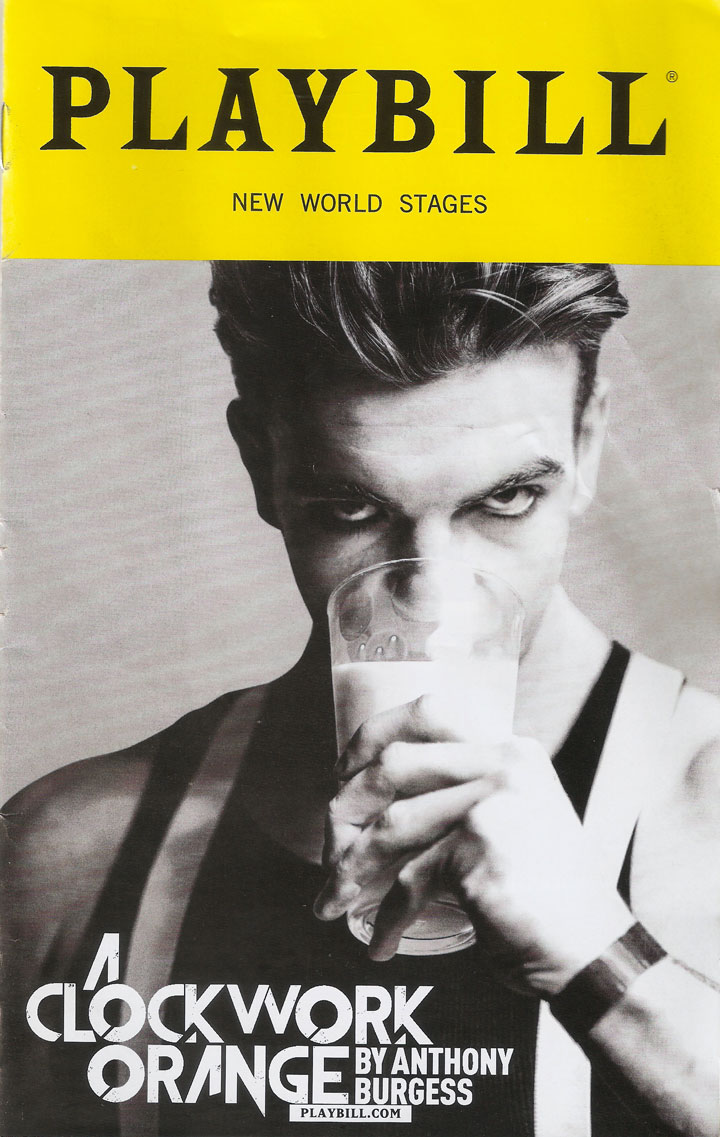 They come down the left aisle from the back of the theater. Four of them — “droogs” as they call themselves. Audience members have already been asked to turn off their phones, and I am glad I have mine off already, because these guys look dangerous. I would not want to get on their bad side. One of them is holding a club, another a chain. They are wearing black pants and tank tops and white suspenders — and they are hot and muscular and intimidating. When they get to the stage, it does not take long before they are fighting with a rival gang, then beating up a bunch of innocent citizens — robbing and raping and smashing things, as violent street thugs in a dystopian society tend to do.

It’s the Off Broadway production of “A Clockwork Orange” at New World Stages, based on the classic Anthony Burgess novel, and I am sitting in Row C with my friend Frank, a fellow homo and bondage freak, and we are totally into this.

Readers of the Metalbond site will be pleased to know that about a third of the play takes place in prison. There is simulated hands-behind-the-back restraint, and a chair tie (but no full-body casting). And for those who remember the cringe-worthy scenes from the 1971 Stanley Kubrick movie in which Malcolm McDowell’s eyes are held open with clips and he is forced to watch violent movies, in this staging it’s a muscular prison guard’s hands holding the eyes of Alex DeLarge — aka Prisoner 6655321 —open. 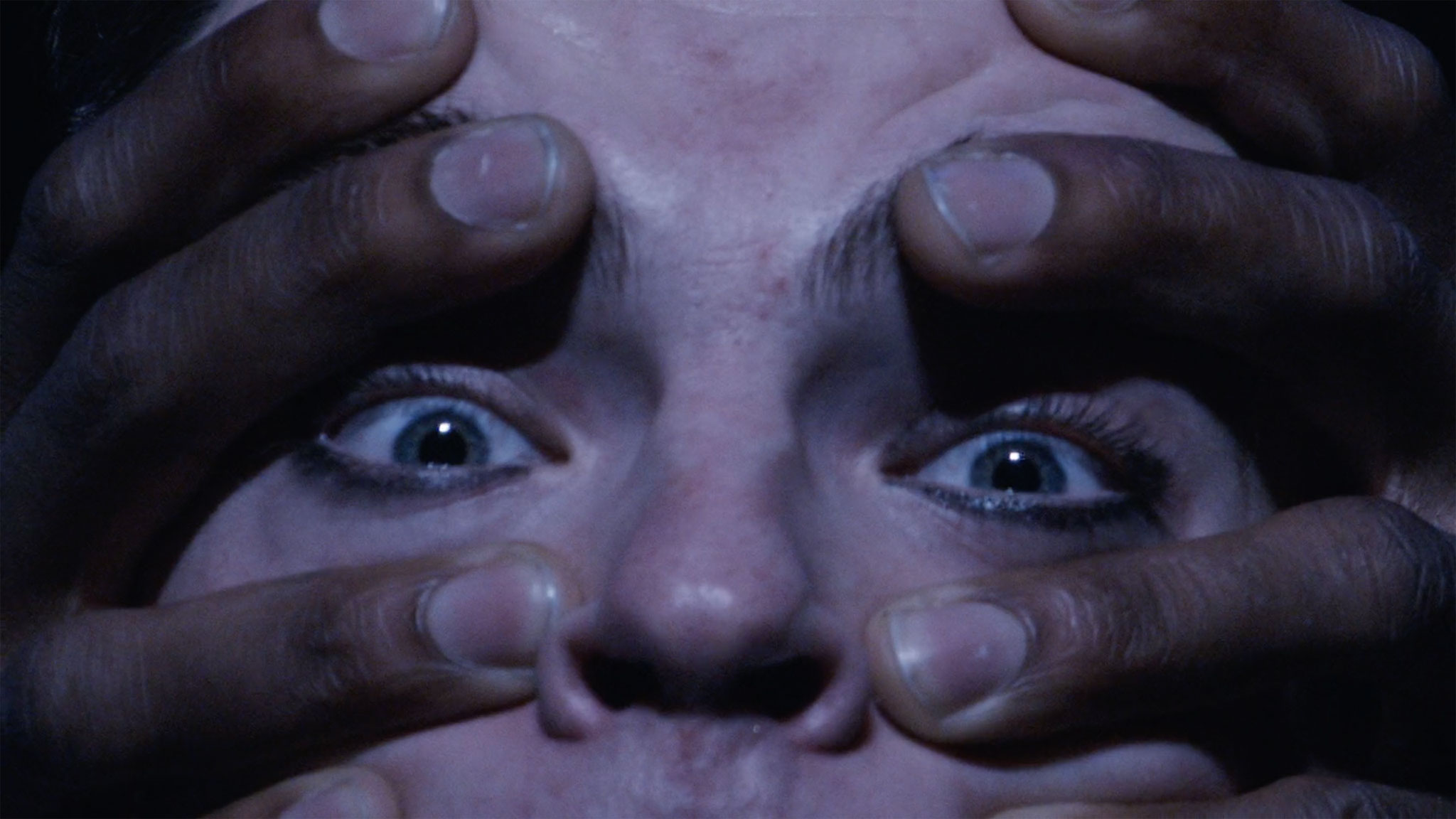 Guys into HOM/GOM (hand-over-mouth/glove-over-mouth) action will no doubt get excited in these scenes, as I did. But perhaps we’re going to need a new term — HOE (hands-over-eyes)? Or maybe we can call it “forced media consumption”? That’s a genuine kink, right?

As a night out with a bondage buddy who also happens to be a fan of the male physique, “A Clockwork Orange” is fucking awesome. The inventive staging, the music and the lighting, and the athletic choreography make it something to experience. It’s a cross between a dance routine and a high-intensity workout regimen. These guys are ripped. There’s lots of chest pumping and flexing. You can practically taste the testosterone in the air. It’s an all-male cast, but the characters they portray are both male and female, so anytime there is kissing or sex or simulated rape it is homoerotic, male-on-male action. Good thing the sophisticated West 50th Street audience members are comfortable in their sexuality. A closet case like Mike Pence would not be able to handle a show like this.

As a play, this was good enough to hold my attention, although I am really glad I read the book beforehand. Otherwise it would have been much harder to know what the heck was going on. Most of the actors play multiple roles, which can be confusing at times. The actors speak in slang called Nadsat, which takes a while to pick up on. These guys also speak in thick British accents, making it even harder to understand them. 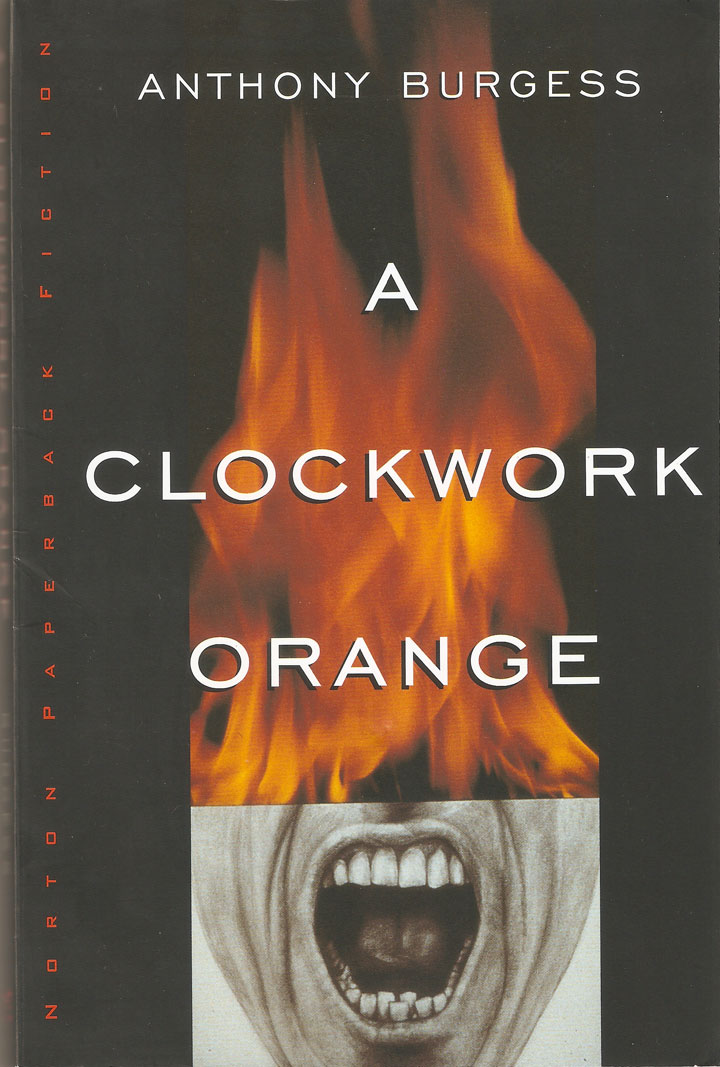 As I learned reading the novel, “droog” is a friend. To “viddy” is to see. “Horrorshow” is an adjective that means good. A “britva” is a blade, “krovvy” is blood, and “millicents” are police officers. “Cancers” are cigarettes, and “yarbles” are testicles. A “mesto” is a place, and “moloko” is milk. The milk that they drink is spiked with hallucinogens and stimulants.

Alex is played by Jonno Davies, who is the handsomest, hunkiest member of the gang. He is tied to that chair because he’s being treated with the “Ludovico Technique,” which is going to make him physically sick if he even so much as thinks about committing violent acts. It’s also, unfortunately, going to turn him into a “clockwork orange” — an organic being who is more of a machine because his ability to choose between good and evil is taken from him by the State. A further complication is that the treatment also makes him sick listening to his favorite music — classical, especially Beethoven (or “Ludwig van,” as Alex affectionately calls that hunkiest, most accomplished of composers).

The show is one act without an intermission and it is maybe about 10 minutes too long. It gets a bit preachy in sections. Most of the music is fantastic, especially the modern remixes of the classical, but I could do without that Frankie Goes to Hollywood song, “Relax,” which is so overused I can’t even imagine what they were thinking including that. And I was not fond of the dream sequence toward the end, mostly because in that scene Alex is wearing a hospital gown! I like him better shirtless. 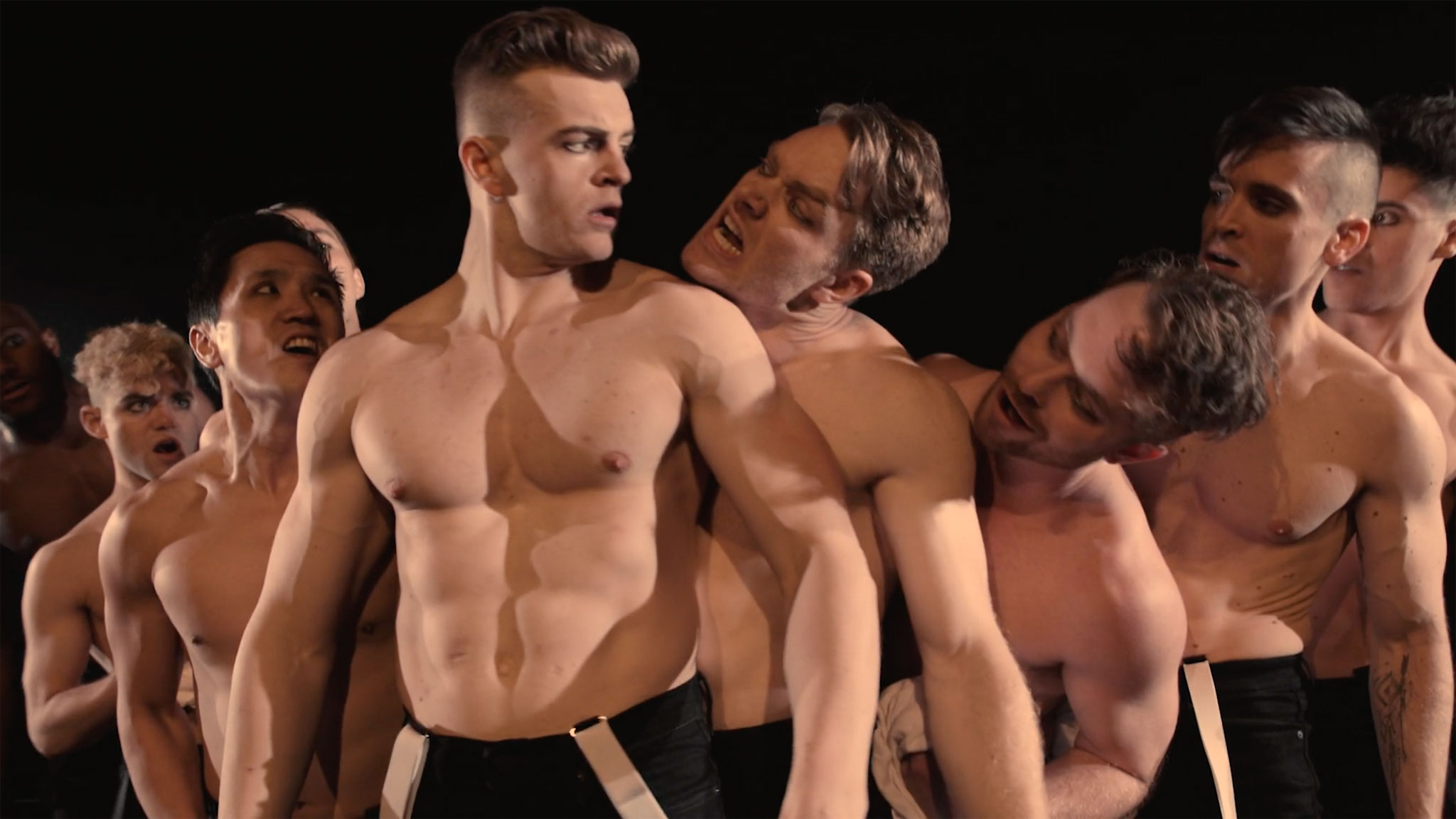 The show is playing a limited run through January 6. I want to go see it again. The official website is here. Their Twitter feed is here.

You can get the book on Amazon, or at any bookstore, or you can read the Spark Notes page, which explains all the themes and symbolism, by clicking here. The Spark Notes include a Nadsat glossary here — worth a glance if you intend to read the book or see the show.

There are also a whole bunch of videos floating around out there. One of the most interesting is the “jail scene” from the earlier London production:

There was also a segment on Spectrum Cable’s “On Stage” program of Oct 28, in which Jonno Davies talks about his workout routine: