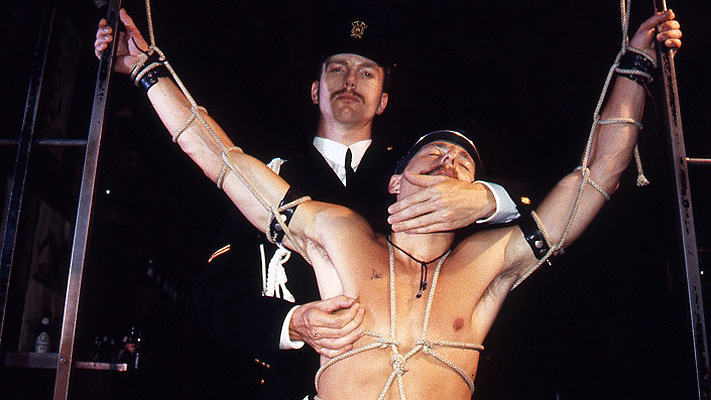 This vintage gay leather sex video, Argos the Sessions, from Roger Earl, is the first in the Bound for Europe series (gay leather, SM, bondage, fetish). Harry Ros, a topman, enters the bar and begins to terrorize a wimpy-looking guy, Paul V. Rooy. Ros slaps him in the face and then chains him up with a long set of links, adding extra clamps for his tits.

Ros and another top, James Bruce, who is wearing some kind of military uniform, do an elaborate bondage scene on Lance Evans before, as the February 1991 issue of Manshots says, they “fist his dick to a gushing finish.” In the dungeon, Gerard Jonkers and Bruce work over a pair of slaves, Frans Roest and Theun DeBoer. Roest shoots a big gusher after a session of bondage and tit play.

While Roest watches from his suspension bondage, Ros tops Gerard. He spanks and slaps with his bare hand, but he also uses a cat o nine tails and a leather strap. Jonkers shoots some of that gorgeous white stuff out of his pierced piss slit. 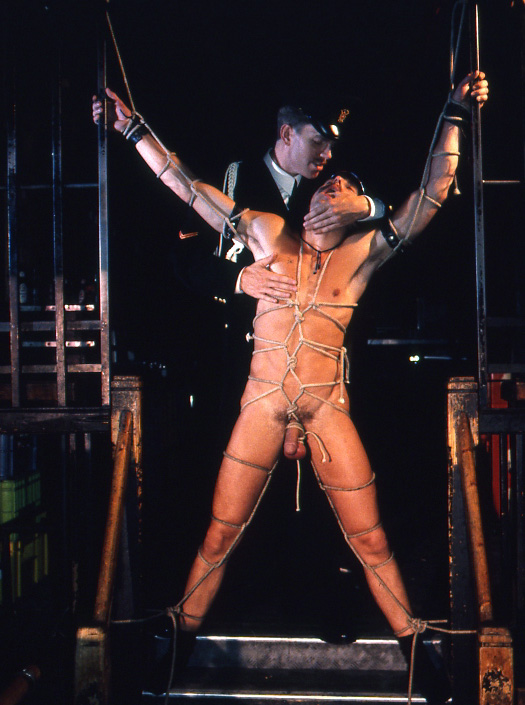 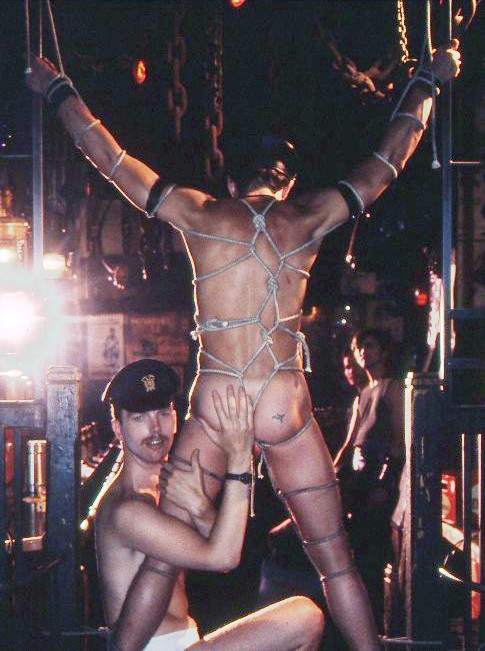 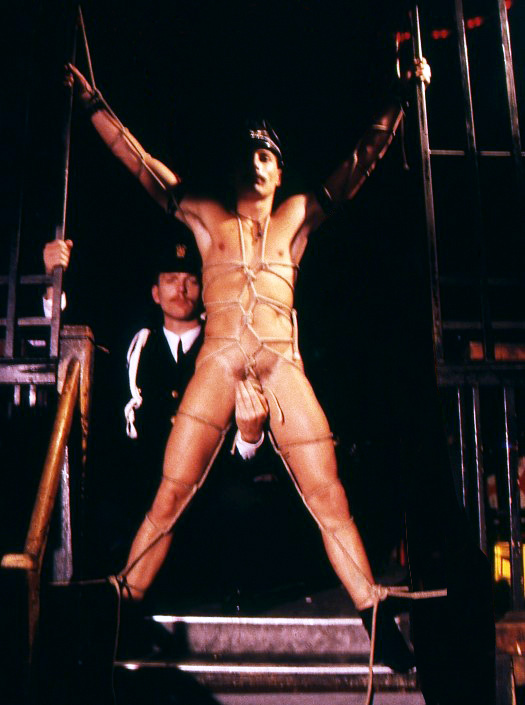 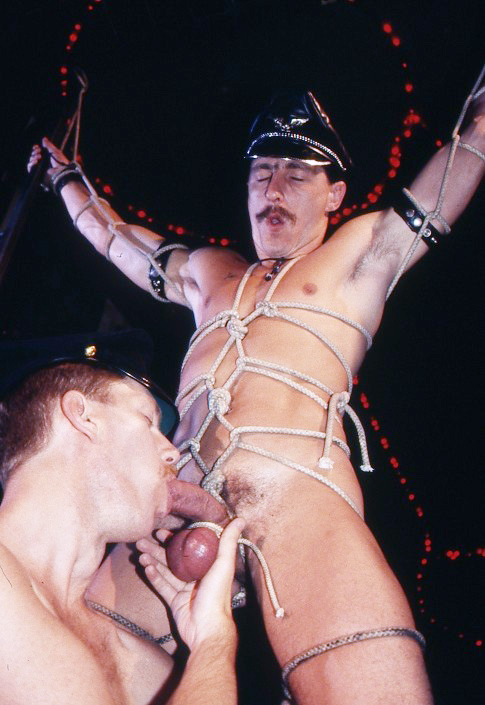 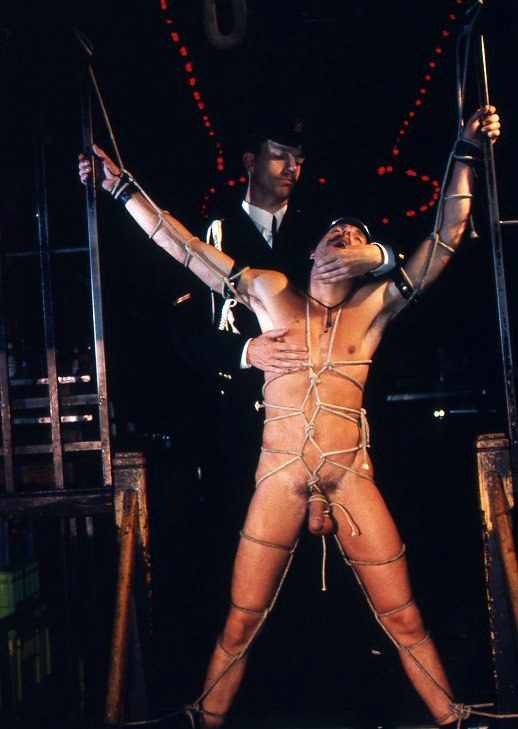 The first scene starts with Harry Ros, notable for his angular features and long fingers, assertively stomping into a leather bar. A bald guy, Paul V. Rooy, with a pierced nose, submits immediately to the slapping hands of Ros (Ros does love to work with his hands; sometimes that’s all one needs as a BDSM top). He chains him up, attaching the nose piercing to his tits and to the Prince Albert on his cock. V. Rooy must really be into humiliation, as Ros ends up making him drink beer out of a dog bowl. The camera work throughout is natural, unobtrusive. The viewer feels that the scene is really happening in the actual leather bar setting; it doesn’t feel staged at all.

A hot moustached daddy type in full leather (Lance Evans) then enters the bar, and interacts with a dreamy looking guy (intense eyes) dressed in what looks like some type of uniform (James Bruce). They make out, and the viewer seems shots of them doing it with their gear off, but not totally naked, an effective touch, but one could do without the ominous music at this point. Ros joins in, and he and the uniform stud end up disrobing Evans; the big bulge in Evans’ leather is quite noticeable.

In the next scene, Gerard Jonkers, a tattooed muscle stud, and Bruce work over two slaves, Frans Roest and Theun de Boer. The groveling Theun de Boer appears to be a major pain pig; though he doesn’t get flogged to the level of some of the other bottoms in other leather films, his writhing moans while chained to what looks like a tree trunk as the tops flog him, and his overall submissive attitude, make the viewer want to see him in some really heavy action. The scene really flows well, climaxing in studmuffin Roest’s cumshot while he is restrained to another pole and spanked and caned de Boer roughly flung down to the ground and used as a muddy bootwipe. Hot!

The front cover of the issue number 20 of Mach, a Drummer publication, features a scene from this film. The issue also contains stills of other scenes from the movie.

“Filmed, utilizing real masters and genuine submissives, in the famed Amsterdam bar, the Argos, this S & M videotape titled, simply enough, Argos: The Session is first rate in both the vitality of the performers and the capturing of their action on camera,” wrote Manshots, February 1991 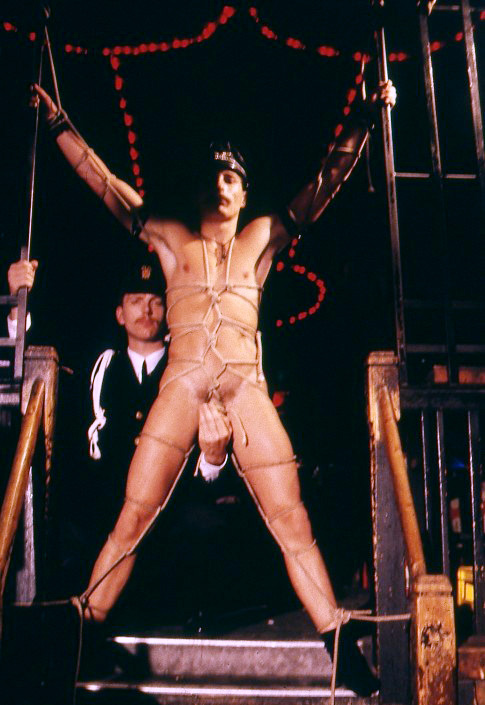