James was awoken at 8 am by all the lights of his cell – they turned on simultaneously and rendered the pitch black blinding white in an instant – and a blaring from above.

He pulled himself up, trying his utmost to shield his eyes with his mitted hands, which watered profusely, and let them adjust.

By the time he acclimated, Arnold emerged from the cell door, on the wall in front of him, and the blaring alarm stopped. A bottle of protein shake with a straw stood at the corner of his mattress.

James knew there was no way he could pick up the bottle, so he bent down and sucked on the straw on all fours. A pat of affirmation confirmed that this was the right way to do things.

“Slave, don’t answer me. Yesterday was a taster, since you only had basically half a day here. From now on, your life will become tougher.”

A bottle of water was produced. This time, James was fed.

What this meant, James was simultaneously fearful and eager to find out. Perhaps these are strong words, too strong. “Nervous” and “curious” would do.

James’ hands were released so that he could brush his teeth and be wiped down for cleaning. The fist mitts were cleaned up before he had them locked back on and was blindfolded and gagged, this time with a slightly chewy bit gag instead of the usual ball. Sunscreen was lathered all over, and he was walked to an outdoors compound, where he was given his facility of sight again.

A single axle flatbed trailer greeted his eyes. The connector reserved for connecting with a pickup was knocked out and a rickshaw-esque pulling bar was welded on in place of it. Luckily for him, a fabric was wrapped around the handlebar.

Let us just say naked metal in the desert sun does not go well with skin.

The sun bore down like it did yesterday – unrelenting and merciless, just like the staff who had gathered to see him suffer.

An athletics training compound seemed to be where he was. A sand track of traditional dimensions carved through the desert.

“Slave, you will pull this trailer around the track.”

James’ mind moved to address his cardio training problem; he had a previous injury that exempted him from running training.

“We know about your injury, that’s why you’re going at a walking speed, not running.”

James’ mitts were taken off, but his hands were at once chained to the bar, and a rope was noosed around his neck. He was commanded to hold it in a way that leveled the trailer as Arnold stepped on with a small stool, sitting where the rope dangled.

A lash of the flogger.

James grimaced at the pain and the heat. He had done nothing except stand and lift and he was sweating from head to toe already. The sand seemed to burn his feet and he shuffled about.

Another lash hit squarely on the nape.

It struck him, he had to move!

Panicking, James pulled the trailer with all he had and accelerated erratically. Almost at the same time, he was choked by what functioned as the reins, adamantly and successfully persuading him to slow down.

Arnold played the role of cart driver; he would rein his “horse” in if it got too fast, and he would use the flogger on it if it got too slow. In a most sadistic move, Arnold steered his cart all the way to the outside-most lane.

Two laps in, James felt a stir in his pelvis. Must have been from all the water and not pissing last night.

As if reading his mind, Arnold pushed rhythmically on the area just above the pubic hair (where the bladder was), like pumping a balloon.

James would have preferred not to piss at all, at least not in full view of anyone else. He fought the sensation, staving it off for a lap.

And yet, fate has a nasty sense of humour.

As he got to the home straight the next, where 20 or so people were watching him, the urge to piss came back with a vengeance.

After all, regardless of flexibility and tenacity, everyone has their limits.

He cursed to himself, angry that he did not give in and go on the back straight, and with that, he pissed himself, leaving a small patch of brown on the reddish yellow ground. Patch, not streak, because unfortunately for James, Arnold noticed when he pissed and slowed him to a halt in front of a hooting crowd.

The staff could control themselves no longer and approached James, teasing him for pissing himself, and touching and smacking him all over. Arnold moved to playing with the slave’s balls while keeping the noose pulled tight. All the above translated to precum, to everyone’s amazement.

Everyone, other than perhaps the slave and his handler, who may have experienced despair and (feigned) disappointment, respectively.

Arnold stepped off the trailer and moved in front of James to slap him in the face.

“You dirty, dirty boy, pissing during training and feeling good about it? You need to be punished.”

Through his gag, James muttered a “yes sir sorry sir,” with no more resolve in his eyes.

He learnt that Arnold liked to punish by flogging in the area which “did the wrong thing.” Case in point, he got flogged right under the throat on the chest for not sucking perfectly, and today he got flogged around the bladder for pissing himself. A crude and doubly cruel but effective way to train animals, and certainly viable for training a human.

He also learnt that he would be doing this everyday to get some sun and build muscle.

Now that it was 11 in the morning, James was walked back into the facility and wiped down first using soapy water, then clean water – his version of a shower. The 10 daily lashes as punishment for not reciting the rules correctly were delivered.

Once that was done, he proceeded as he did yesterday – lunch, workouts, submissive training, dinner, time with his handler, sleep. Even right down to being forced to piss as he walked on the track.

All this for another 12 days. 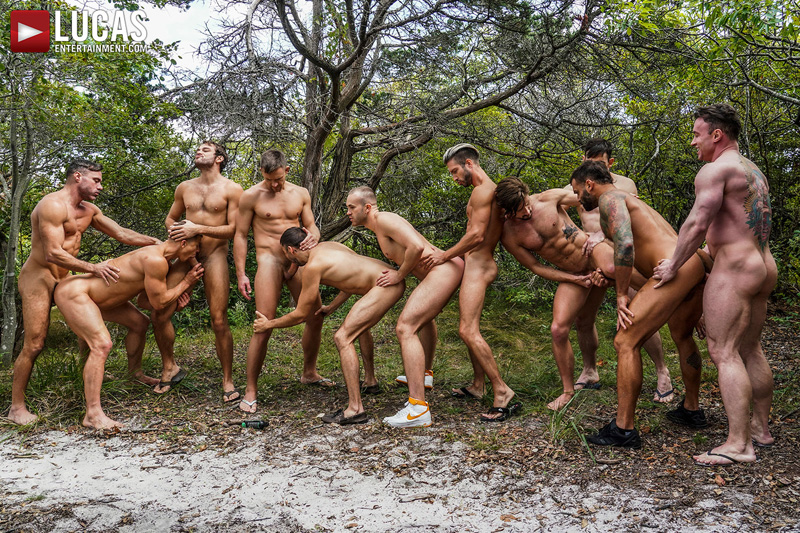