While I was thinking about all the things that could mean for my future (!!!), the dudes in jeans were putting me on the truck. I’m saying “on the truck” instead of “in the truck” because my place was in a cage attached to the bed. I would ride to the farm like an animal. No, not “like.”

The two five-gallon tubs of Slick It Off were nestling beside the cage. One of the dudes told me to stow my box behind them, and he unclipped the leash from my collar and handed it to the cop. I could see a lot of leashes hanging in the truck’s rear window; I guess they didn’t need any more. And was that a rifle sticking up between the seats? That or a shotgun! They’d be ready for me, in case I caused any trouble during my transport.

They opened the little gate to the cage, and I clambered in. You could tell that the cage wasn’t just a temporary part of the truck; it was bolted to the bed. There wasn’t enough room to stand up in, but there were little shelves on each side of it where somebody could sit. Just enough for four workies to be crammed inside. But today only one workie was out for delivery — me. I had the whole cage to myself.

END_OF_DOCUMENT_TOKEN_TO_BE_REPLACED

Nick Maduro is a hot, big-dicked cigar-smoking daddy, and Teddy Bryce love the smell of a daddy’s cigar. Watch Nick blow smoke in Teddy’s face before fucking him into submission

Saturday arrives, it is late afternoon as Sean is sitting on the sofa watching television in his apartment. He is waiting for the phone call from Lance as to where they are going to meet. Wearing his well-worn Levi’s 501 button fly in blue; he has on a plain black t-shirt under his leather jacket that he wore during their first meeting in the park, with a pair of black ranger style leather boots on his feet. His attention is not with the program on the television screen, his thoughts go to the man he met dressed in leather.

What could he want Sean to do this evening? There was something different about what has happened so far. Sure, Sean had played in the past, light bondage, some spanking and wrestling with a guy or two. Over the past few years, he’d meet a guy, get tied up and even fucked and sucked a guy off, but nothing ever seems to stick. It was more of a one-time event for them to each get their rocks off and then move on to the next scene with the next guy.

With Lance, Sean had a different feeling in his gut. That they are meeting again tonight means things are lasting longer than they normally do. Their conversation in the park was hours long and felt that Lance was seeking something long term. That is how Sean has been feeling as he has been getting older. There is time to be a kid and fuck around, then time to become an adult, getting serious about one’s life, to connect with someone and form a bond that will last.

END_OF_DOCUMENT_TOKEN_TO_BE_REPLACED

Before he could see them, Dylan smelled the stink of spilled beer and the sound of frat-boy stadium rock. As Colton turned a corner he heard shouts and cheers, and when Colton jerked Dylan’s leash and pulled him into view, the cheers became twice as loud. The Reds were having a blast.

The party was an obscene display of… stuff. Multiple boxes of uneaten pizza, bags of hamburgers and French Fries, and coolers full of beer bottles. Huge TVs hooked up to satellite boxes played some sporting event, though Dylan dared not look at it. Other TVs were hooked up to Xboxes.

But the Reds owned another type of “stuff” now, too. In the center of the room, a naked man was crawling on all fours. Costume dog ears were strapped to his head. Out of his ass protruded a leather dog tail, the other end of the toy jammed into his butt. A thick leather collar encircled his neck, and a loose leash hung from it that dragged as he crawled.

END_OF_DOCUMENT_TOKEN_TO_BE_REPLACED 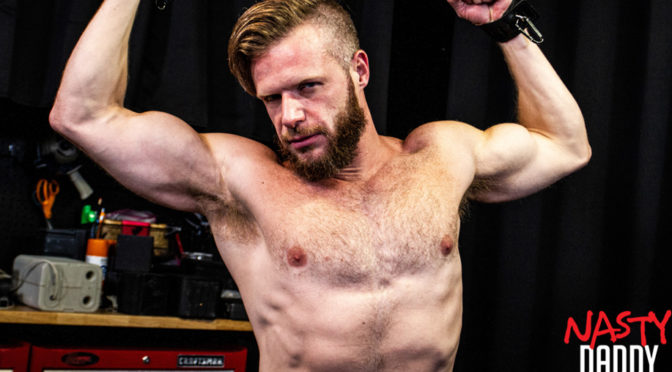 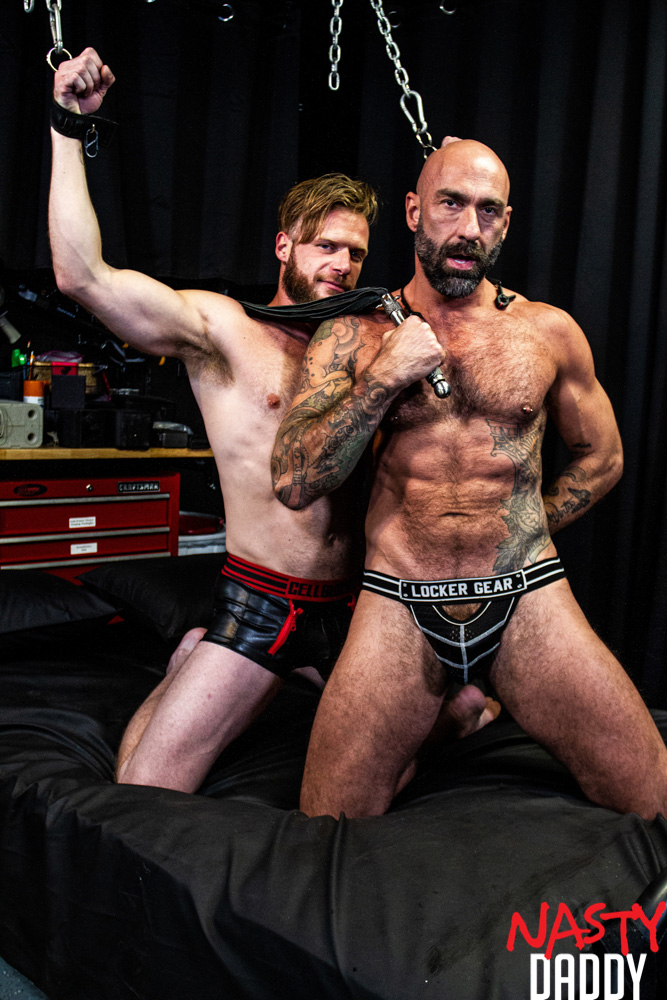 Meanwhile at Nasty Daddy, Brian Bonds has grown a scruffy beard, built up the muscles on that ripped body, and pulled on a pair of leather shorts … 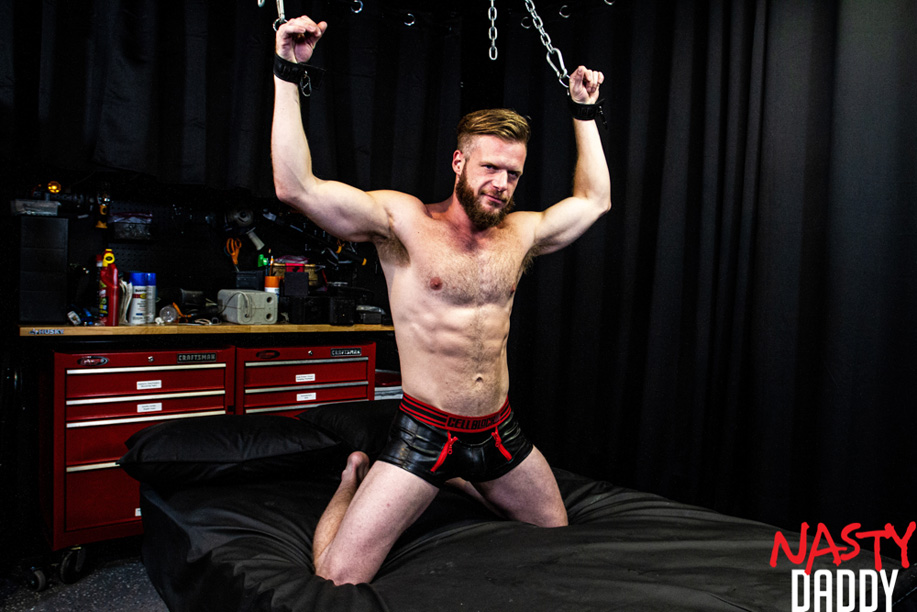 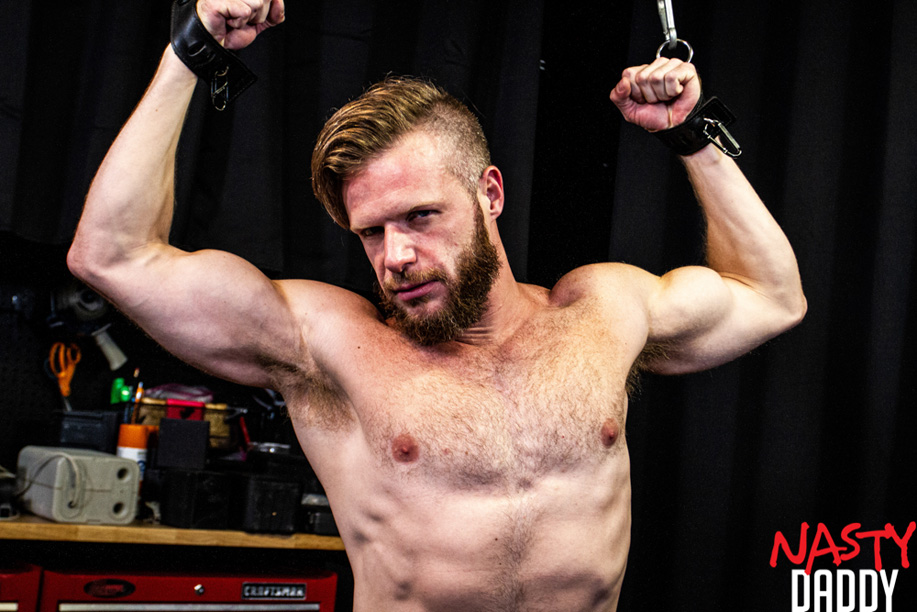 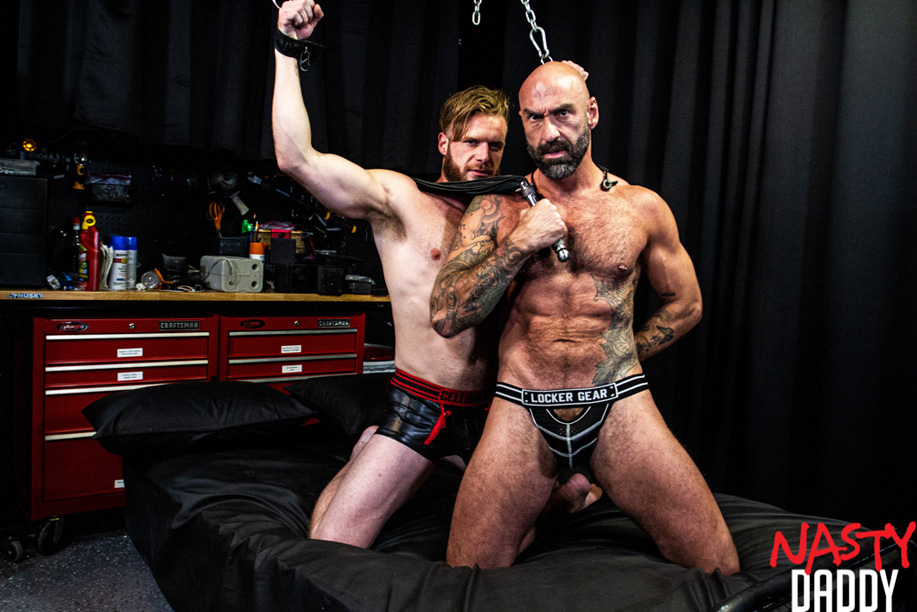 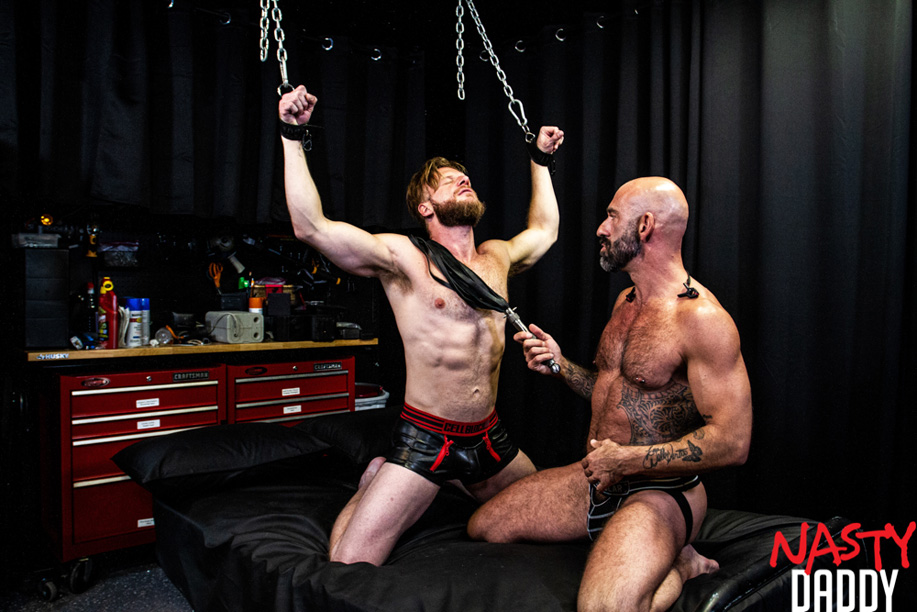 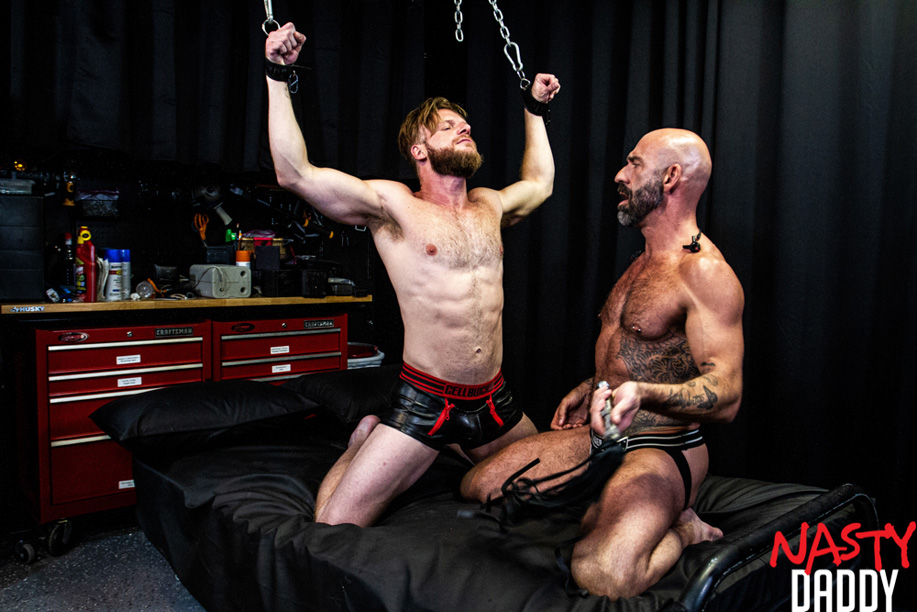 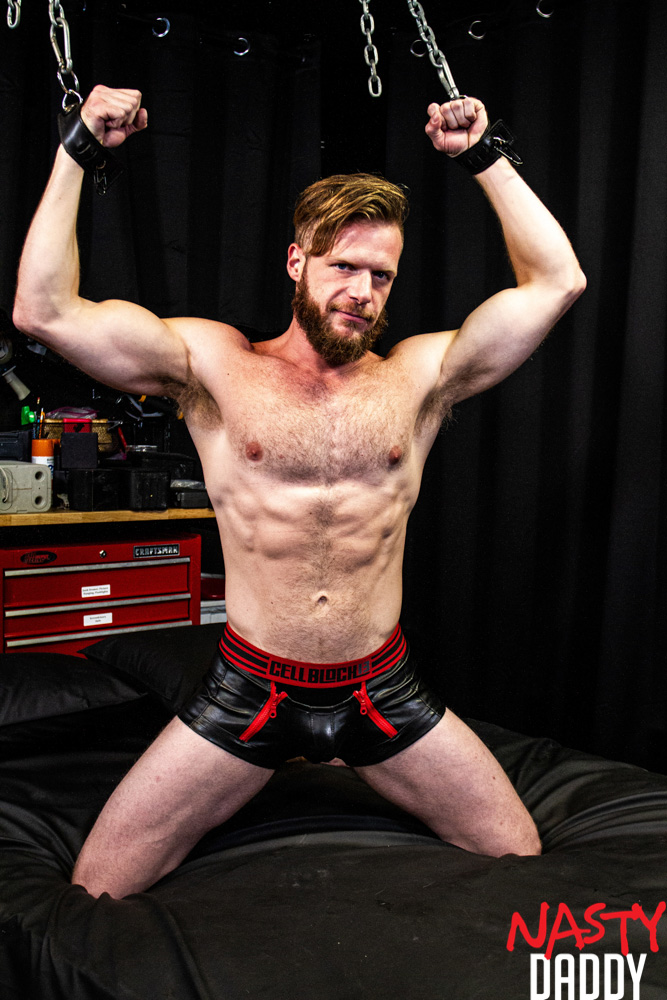 END_OF_DOCUMENT_TOKEN_TO_BE_REPLACED

Mike started to struggle out of the rubber t-shirt and as his accumulated sweat ran out from under it, decided to do this in the bathroom. He grabbed the straight jacket and hood and took them all into the shower, where under a stream of warm water he stripped naked and soaped himself clean of the mass of cum and sweat that was matting his pubic hair. He luxuriated in the shower, turning the heat up to massage his muscles that were aching after the extended bondage. As he did, he could see the red marks that the rubber had left on his skin. He ran his fingers over them and as he did he thought back to how they had been caused and he felt his cock rising again.

He ran water over all the rubber gear and left it hanging up as he stood in front of his bathroom mirror. Cleaning the steam off it with a swipe of his hand, he saw his shaved head clearly for the first time. His head looked strange and angular without his normal covering of hair, and made Mike look completely different. He hadn’t realised that Jan has also removed his eyebrows, which made his eyes stand out more. He ran a hand over his head and looked at the stubble on his chin which now looked incongruous on his hair-stripped head. Picking up his razor, he shaved his chin clean. As he put the razor down, he found another present from Gordon – a tub of some kind of wax. Taking some out, he smeared it over his head and then spent several minutes rubbing and working it into his scalp until it gleamed.

END_OF_DOCUMENT_TOKEN_TO_BE_REPLACED

Most evenings, with winter setting in, I walk back from Starbucks as darkness falls. I enjoy my few hours at Starbucks working on my writing and sometimes exploring new music and movies that are going to be released. On my walk home I pass by the city police stations and often see them coming and going to their patrol cars. A few of them look damn handsome in their dark uniform, and now that it is colder they wear their jackets over their shirts and heavy Kevlar vests. Sure I have a few thoughts of how I would like to serve a Cop Boss one day. I need that type of structure and control in my life, and I have a feeling there are several that would keep me well under their control.