I was never much of a jock.  Alright, to be truthful, I wasn’t athletic in the least.  I had never played any sports in High School – I was too small and too uncoordinated.  I hated gym class – it only proved the point and the other guys never failed to point out how inept I was.  They hated having me on their team as I was sure to screw up and cost them the game.  The football team was the worst at harassing me.  They would make sure that I was somehow tackled by mistake every time we played flag football in gym.

END_OF_DOCUMENT_TOKEN_TO_BE_REPLACED

Hey guys, here is a challenge from Metalbond and Mister-X: Read the story below and then post a comment or send me an email about what YOU would do, and what you would like to see happen next.

What would you decide to do?

Many of us who live alone dream about having someone always available at our beck and call to put us into bondage.  But how many of us, when suddenly given this opportunity, would trust a perfect stranger to now live in our home and perform this task?

END_OF_DOCUMENT_TOKEN_TO_BE_REPLACED

I learned today that Jim (Maurice) Stewart has passed away.

I had the pleasure of meeting Jim when he came to present at GMSMA in New York City in the mid 1990s. Since then, we had been regular correspondents via email over the years.

He will be missed. The guy who sent me this says it is of someone strung up in the Meat Rack at Fire Island: 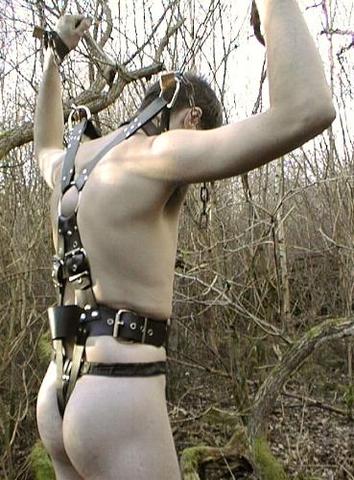 I don’t know. It LOOKS like the Meat Rack, but I never saw anything like this out at Fire Island, ever, when I was out there. Not that I spent much time in the Meat Rack, mind you.

I met Matthew during my first week at uni and discovered, much to my pleasure, that he was in all the same lectures as me.  He was a surfer type, 6 foot, athletic build, with long blond hair and piercing blue eyes.

At the end of lectures on Friday afternoon, he asked if I would like to drop by his place for a coffee.  I lived in a dorm on campus; Matthew shared a house with two other students about 10 minutes walk off campus.  He explained that his house mates, Nick and Brad had gone away for the weekend.

END_OF_DOCUMENT_TOKEN_TO_BE_REPLACED

Thanks to Dan Savage for launching the It Gets Better anti-bullying campaign — and thanks to RH for passing this particular video along!

The box sat in the middle of the room, nothing about it all that distinctive. The only thing that would draw attention to it where it placed next to another wooden box was the hooded head that poked out of a hole in the top. The hood that could be seen at a casual glance was a English s10 gasmask, it had been modified so that instead of straps at the back it was the front part of a rubber hood.

END_OF_DOCUMENT_TOKEN_TO_BE_REPLACED Did anyone ever see the movie Cruising with Al Pacino? Apparently this movie was quite controversial when it came out — according to the Back in the Gays website, some of the interior shots were made to look like the legendary Mineshaft sex club.

Anyway, a local friend of mine told me this true story of his PARENTS taking him and his brother (both of whom turned out to be gay) to see Cruising when they were kids:

My father, with the misguided idea that the movie was about “cars cruising” took my gay brother, my mom and me to see this movie. My brother and I had boners the entire film, and my parents sat there in utter shock. A great childhood memory!