Would you trade places with me if it meant I would not let you out? 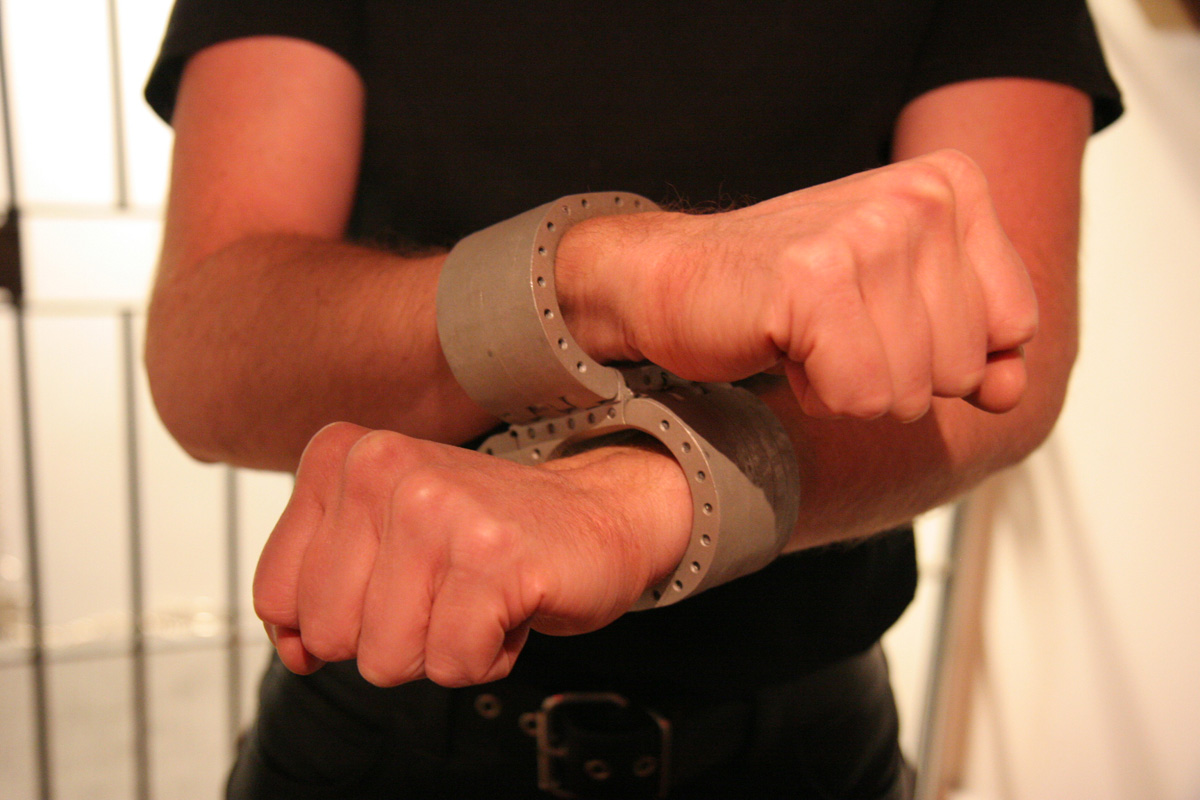 This time the darbies are for the wrists 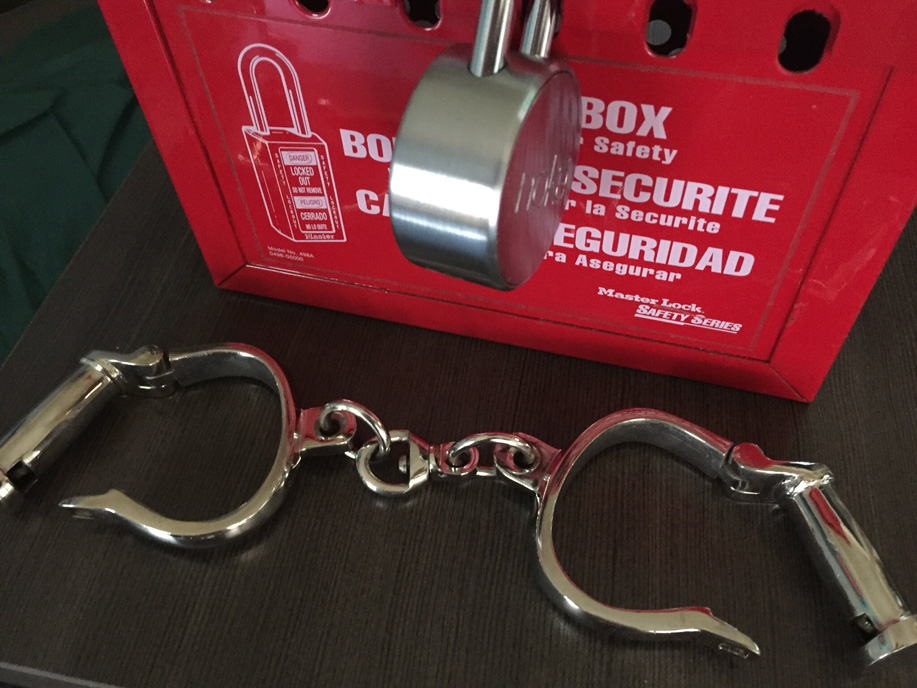 That’s a Bluetooth technology padlock on the lock box 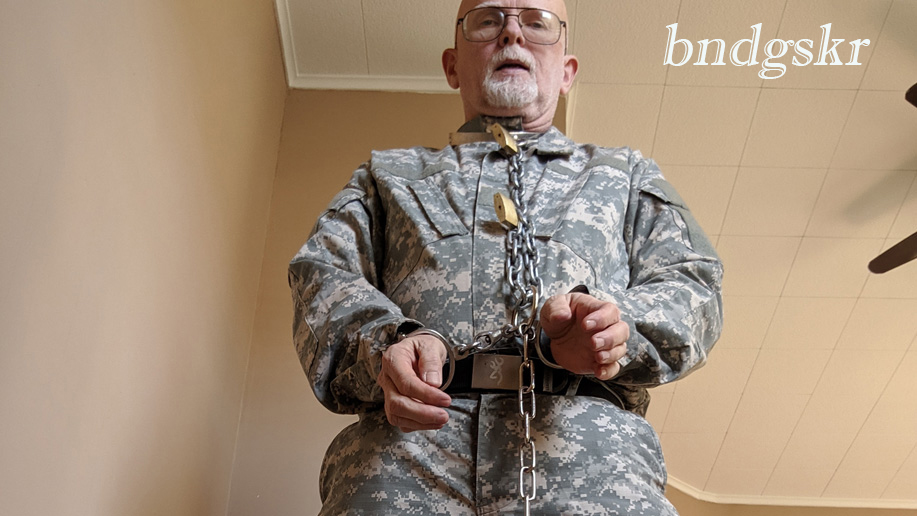 How are you guys handling lockdown these days? If you are doing some lockup during lockdown, that is a great idea! Like bndgskr from Recon, who sent these pictures of himself doing some solo play recently with locking metal restraints: 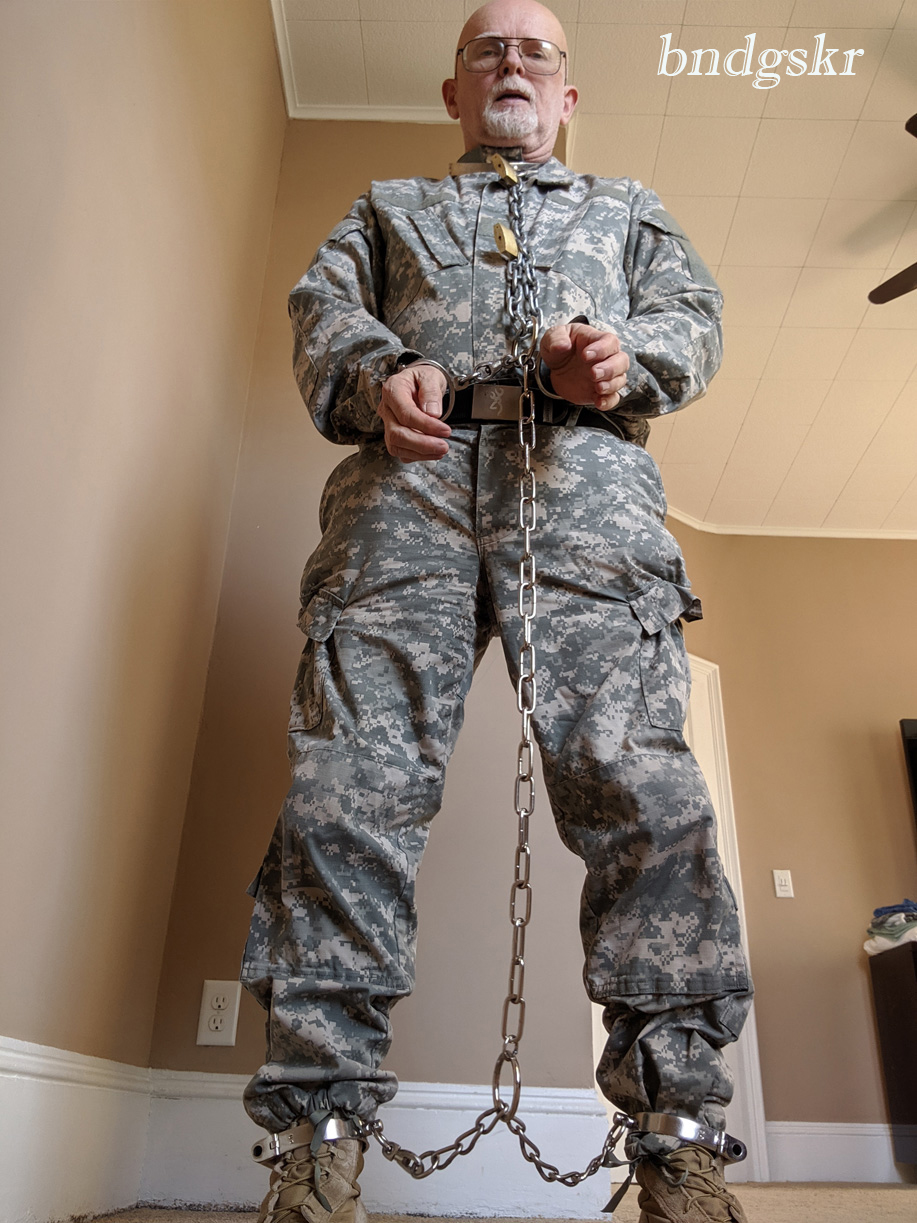 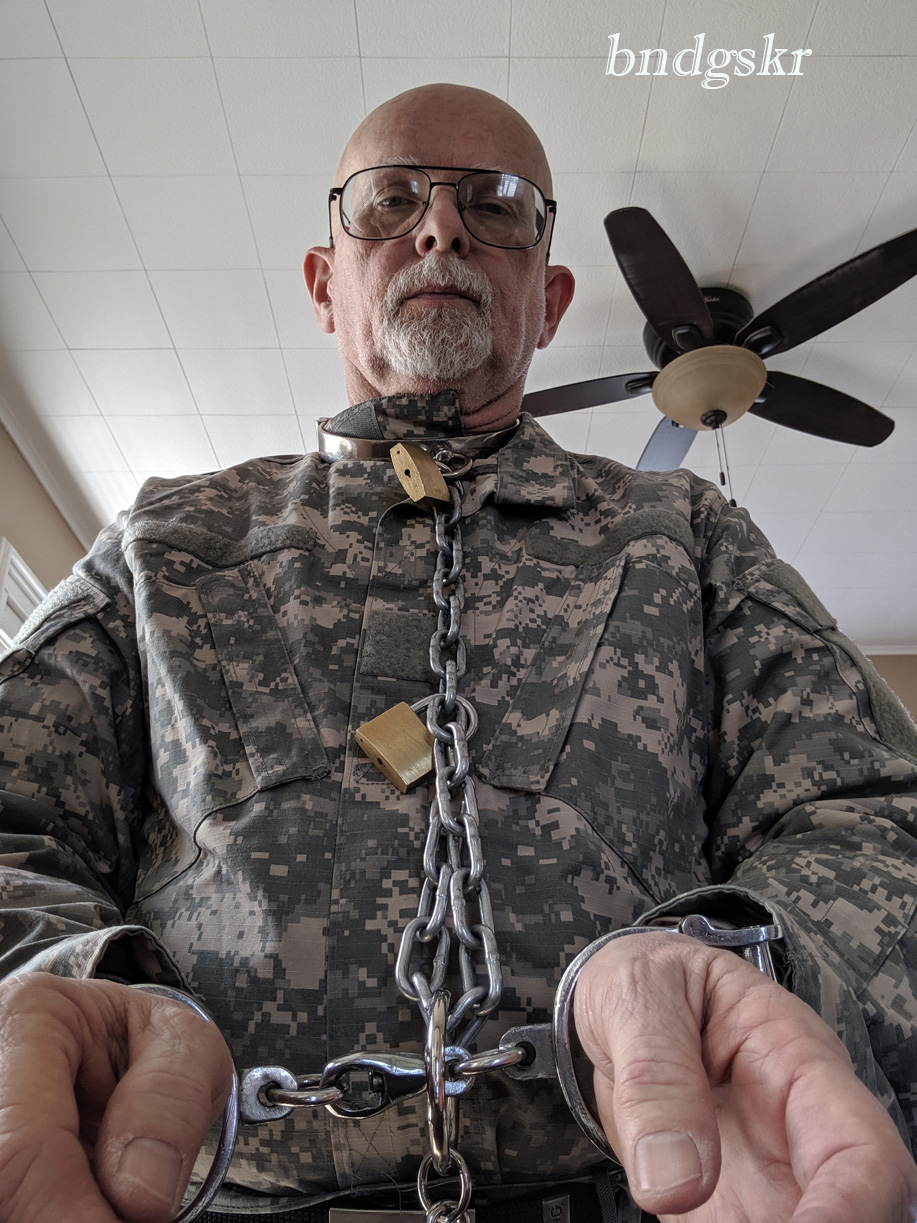 If you like, you can chat with bndgskr on Recon. Also check him out Men In Chains — where he has appeared in several videos under the name of Harold Monrow! 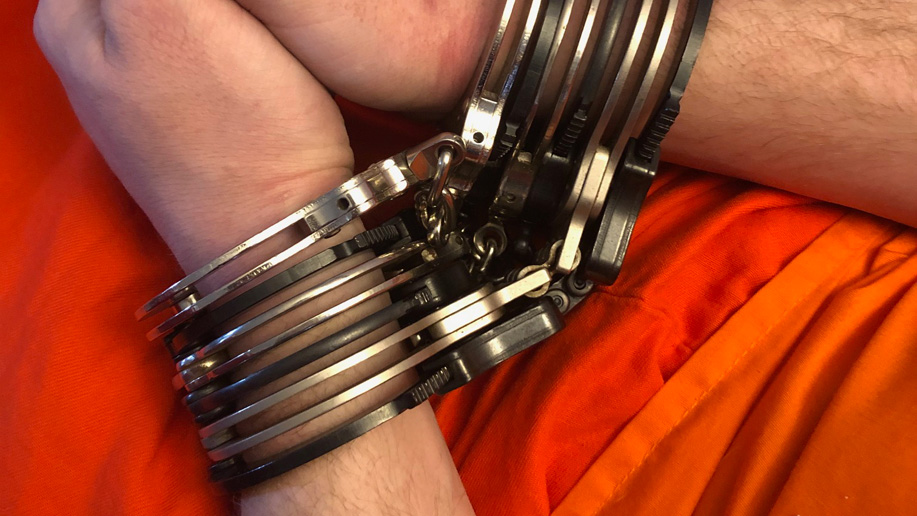 Check out these pictures from Cuffsandcops. He had a prisoner over, and he added another pair of handcuffs every 10 minutes until the perp was locked in 10 sets! Fucking hot if you ask me! 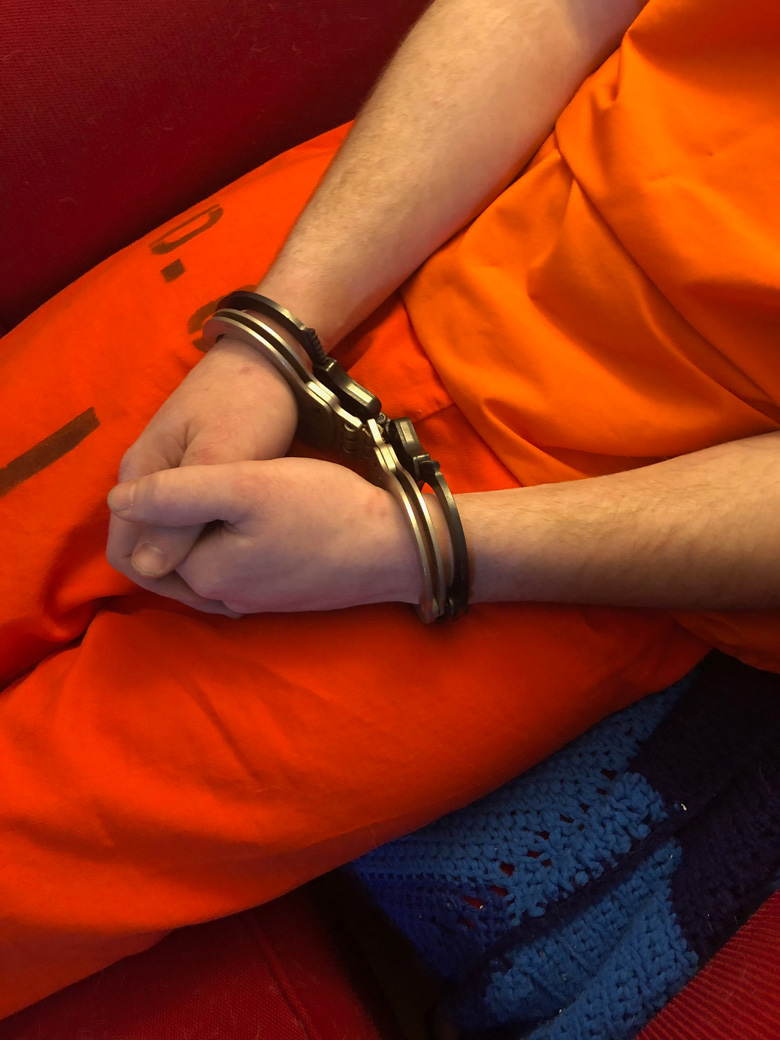 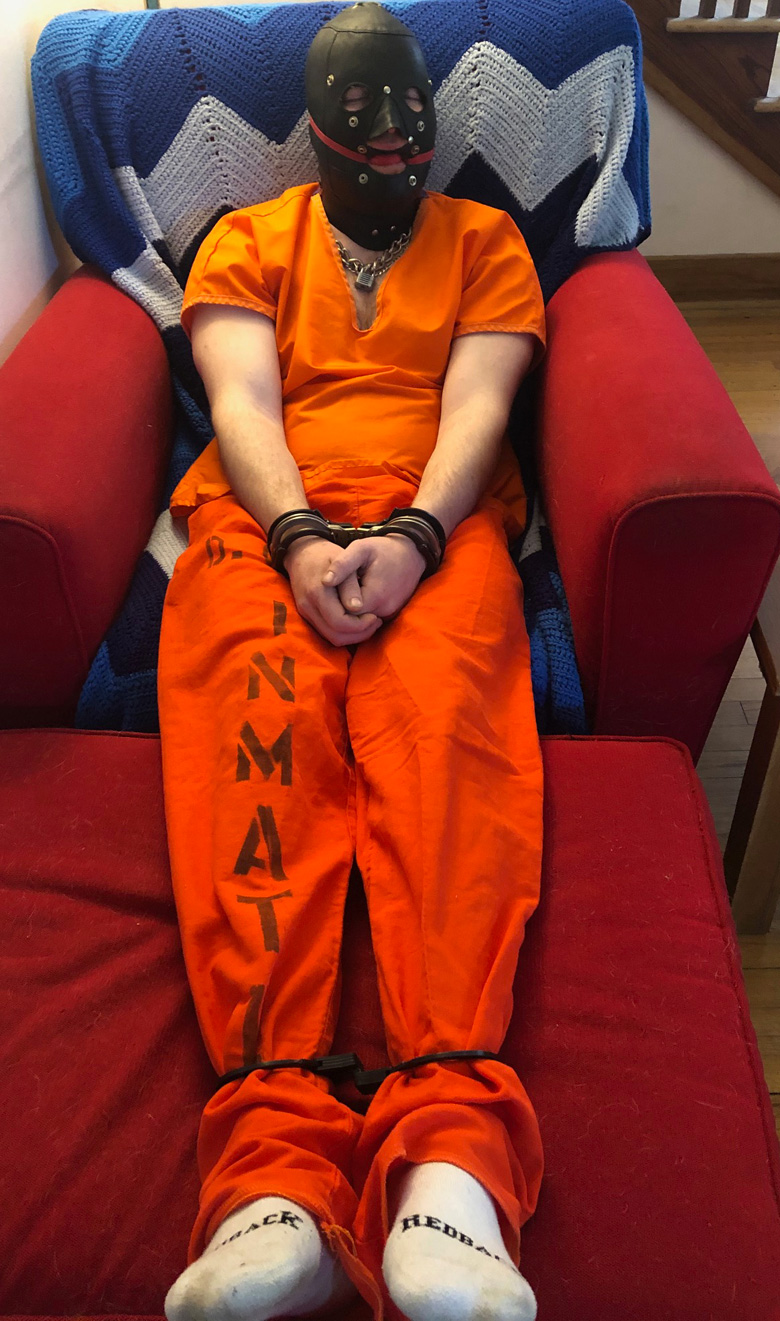 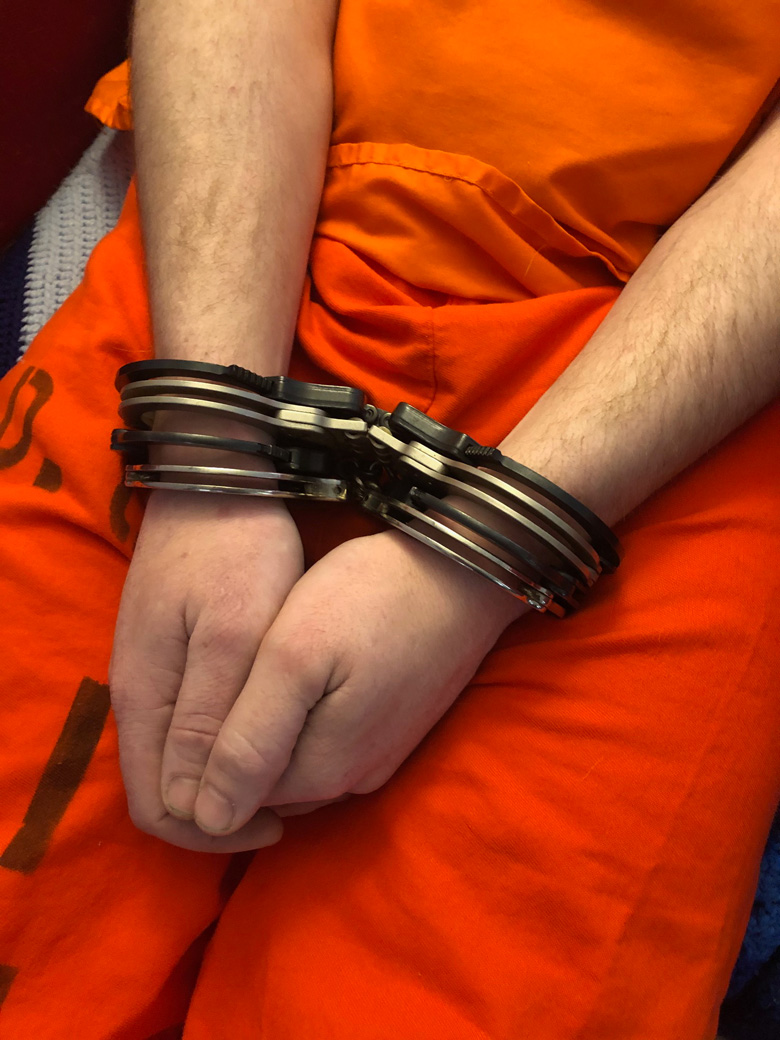 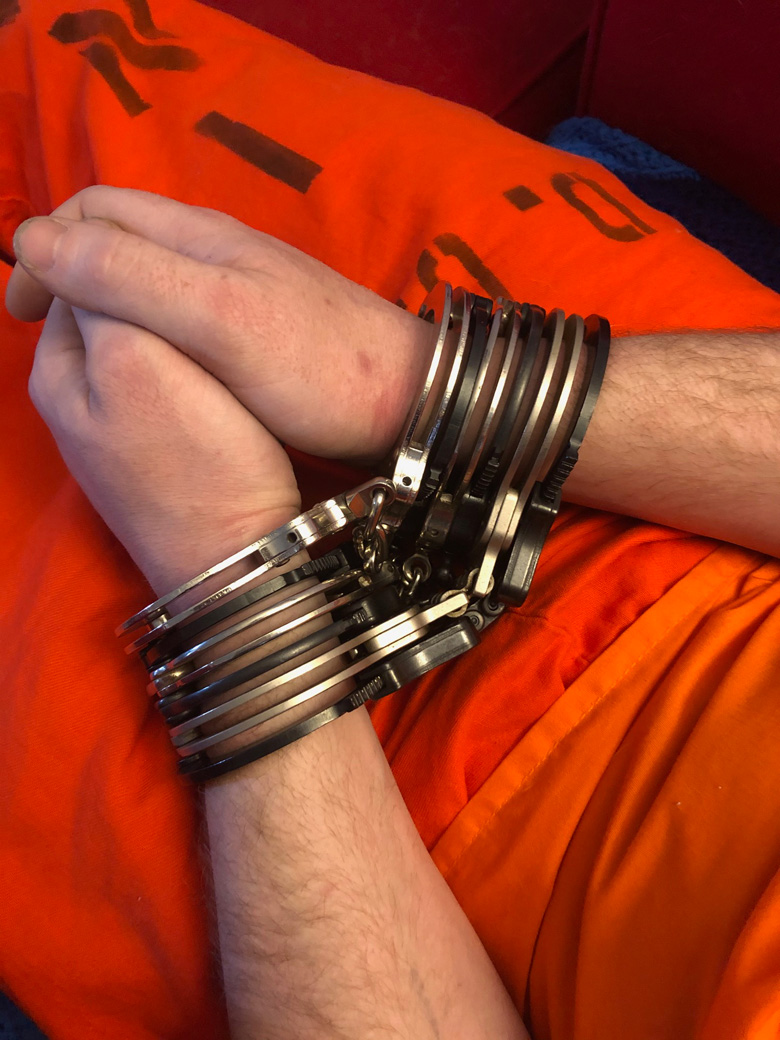 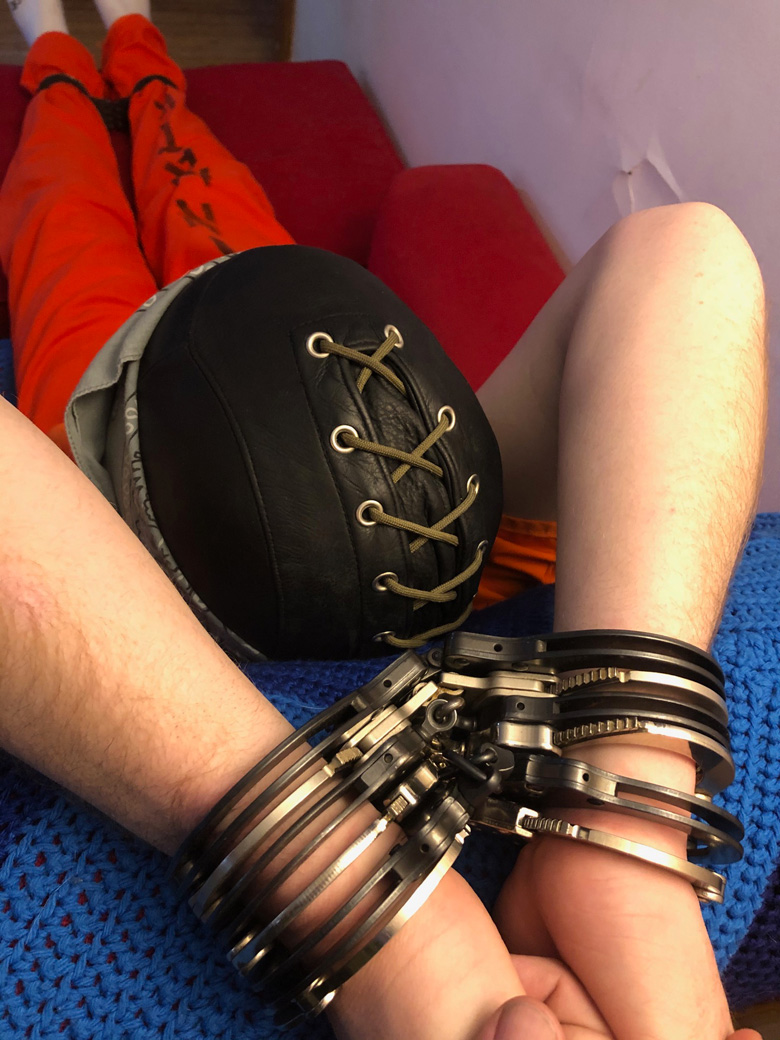 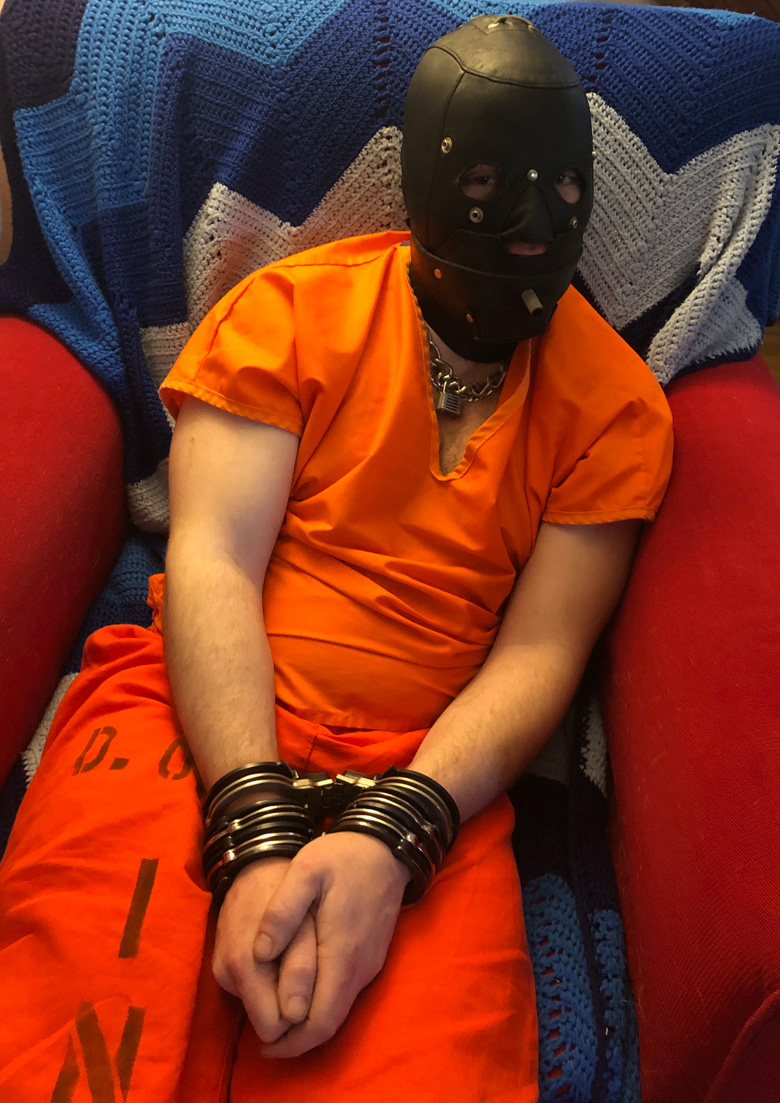 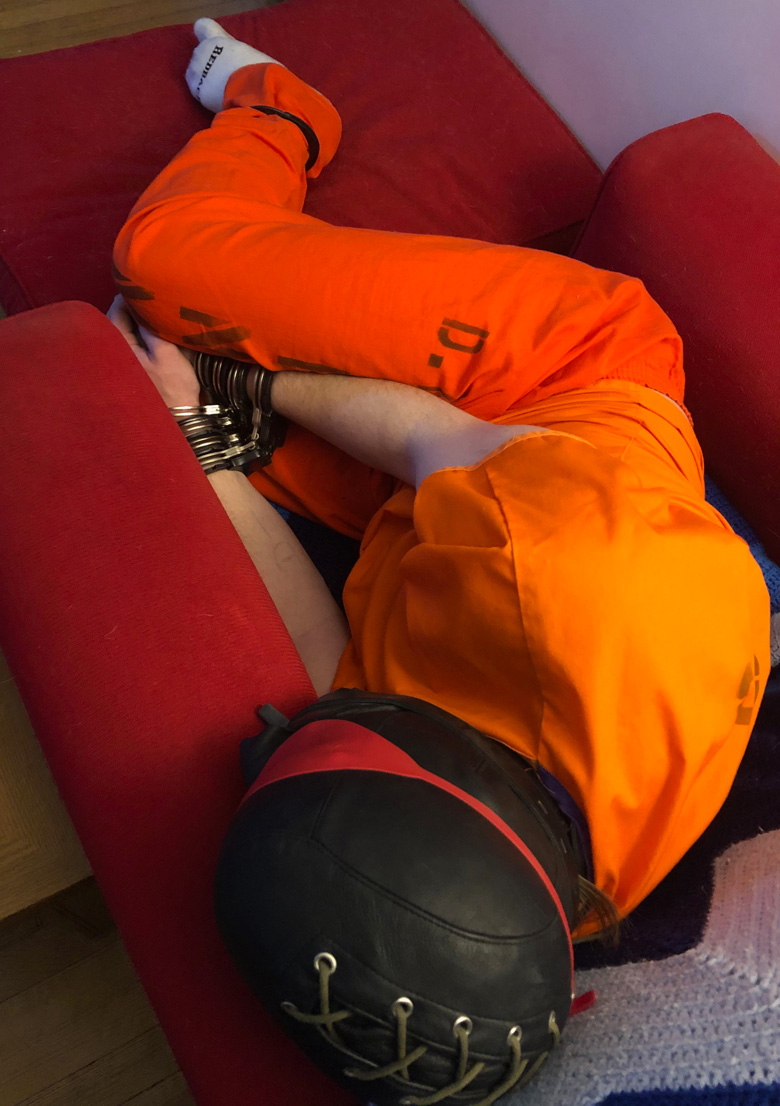 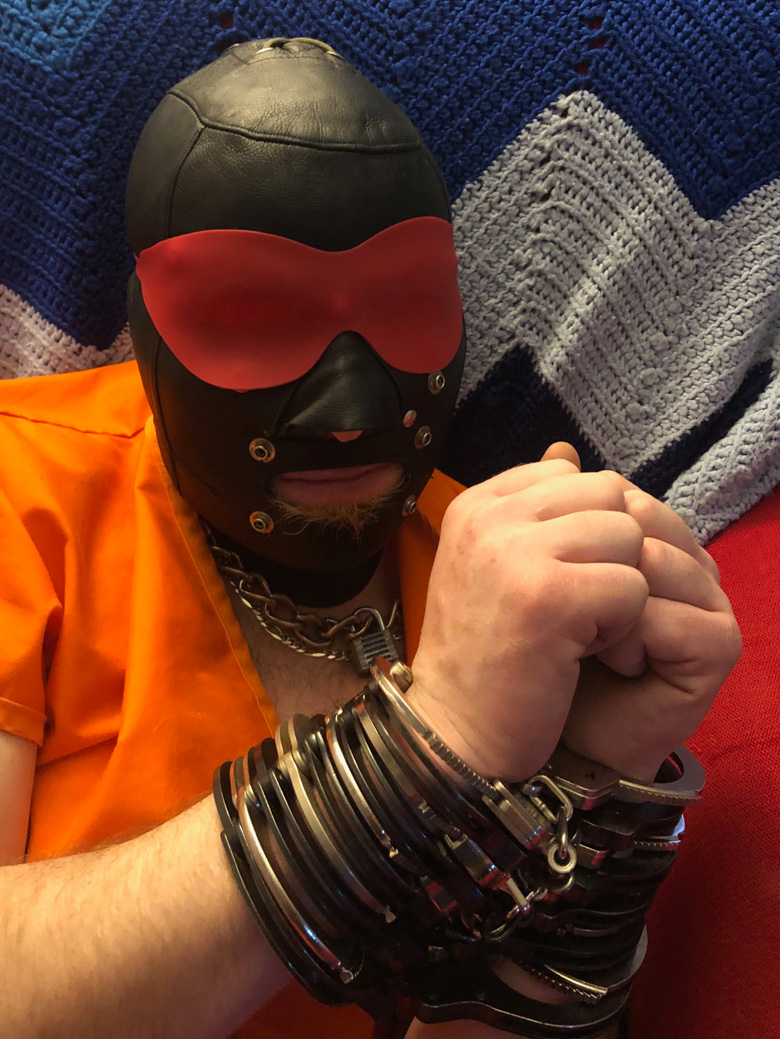 You can read stories by Cuffsandcops here, and also check out his Tumblr page here.

These are in the unlocked position 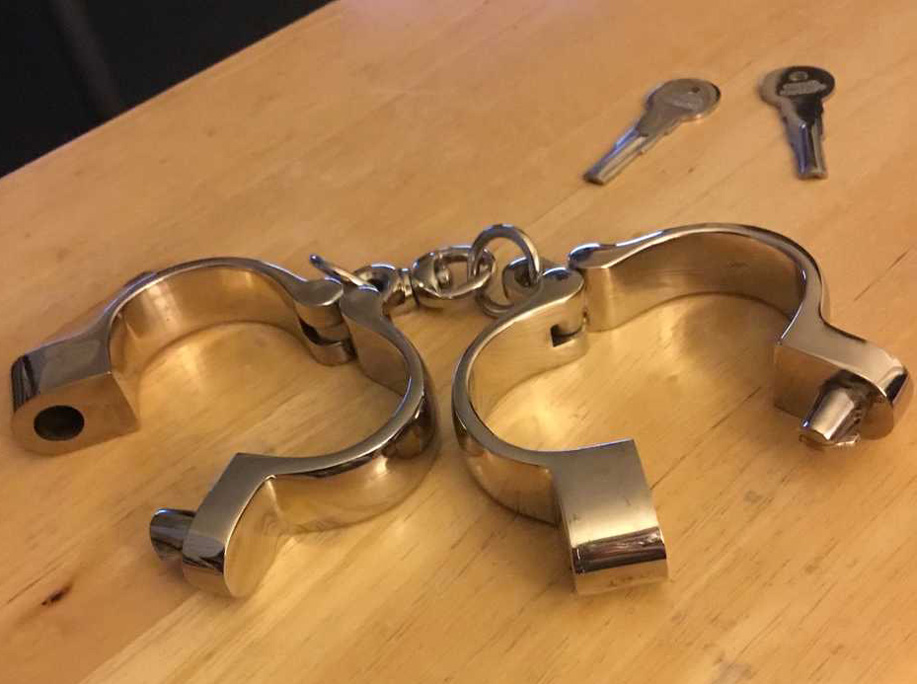 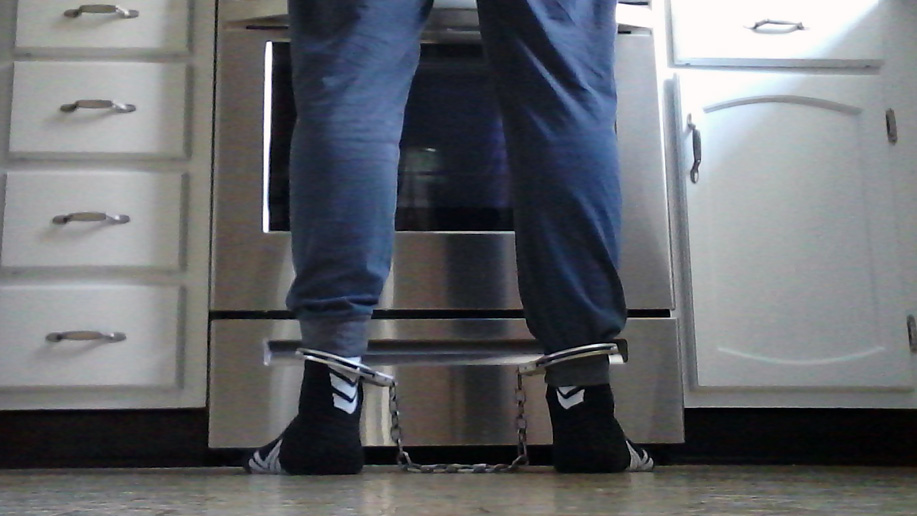 If you’re home this Valentine’s Day weekend, be sure you are properly restrained! Like Atlanta Stud, shown here! In addition to the leg cuffs, he says he’s also wearing chain collar and jailhouse chastity! He’s ready to make breakfast — and later maybe he will sit down to write more bondage stories! 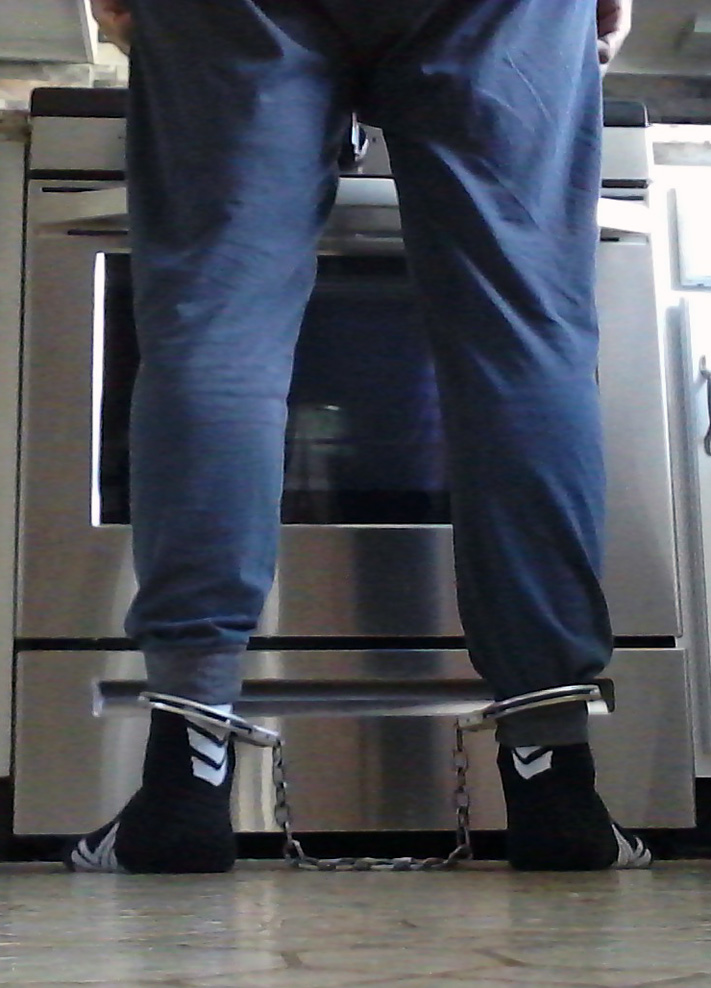 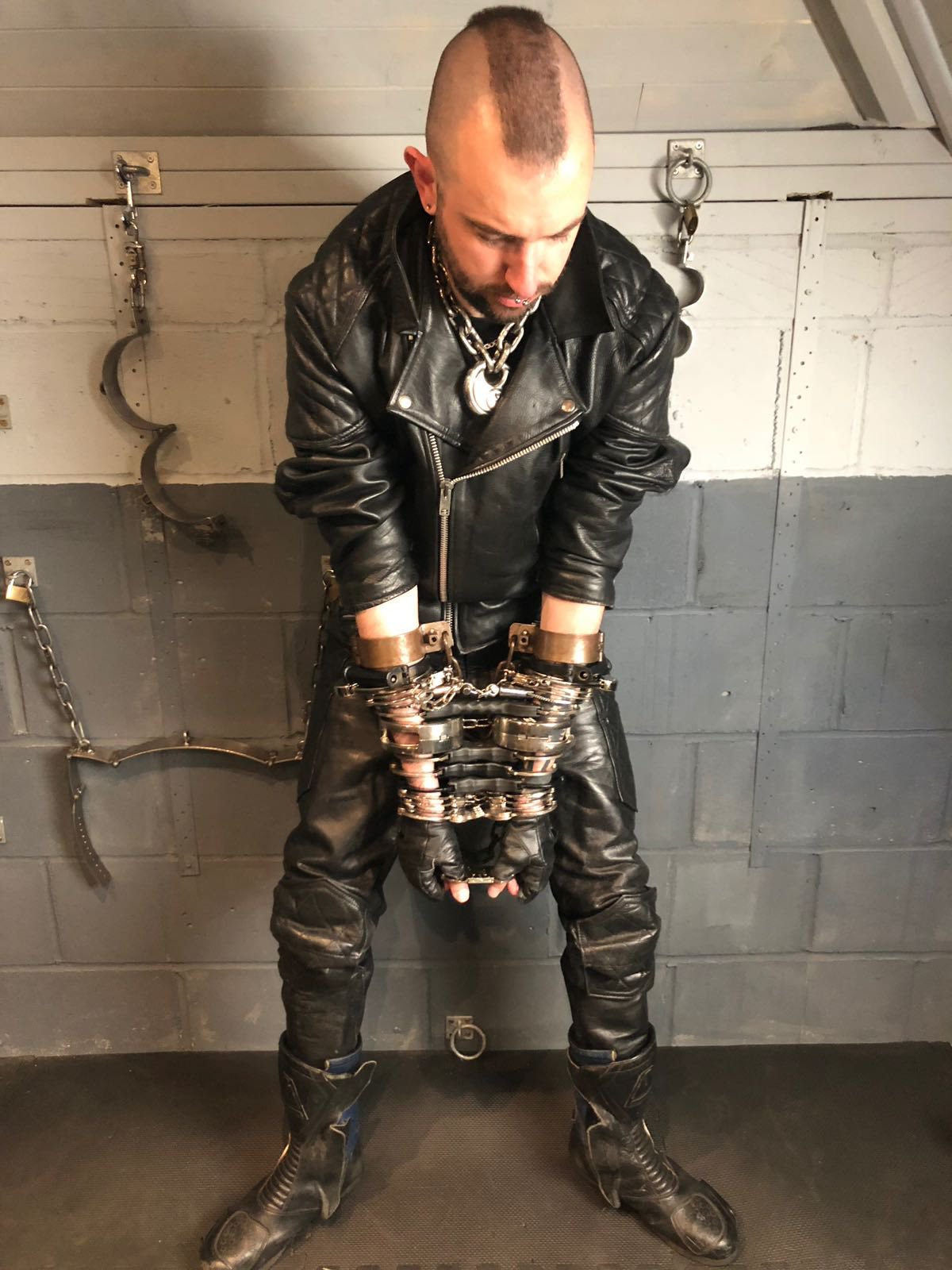 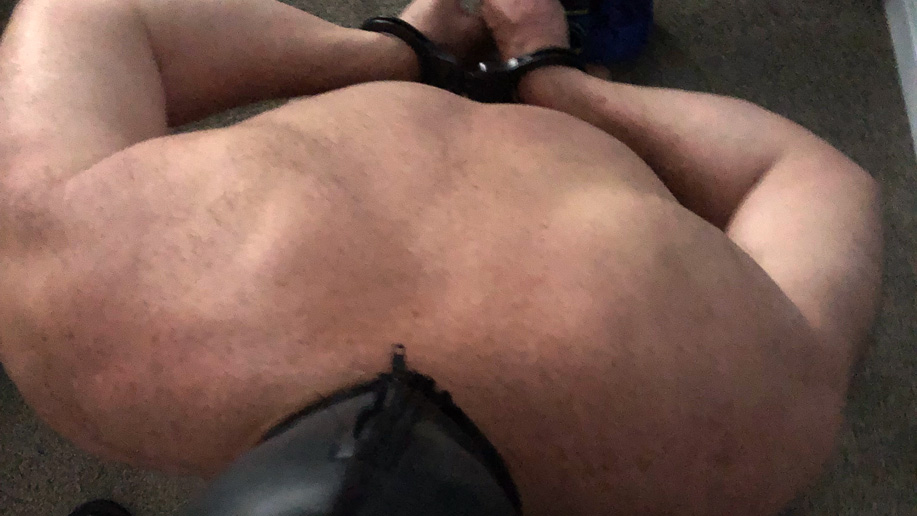 This past Friday, I visited a friend in Annapolis, Maryland. After grabbing some lunch, I set off to visit another friend in North Beach. He wasn’t arriving home from work for about an hour longer than the drive was going to take. I decided to pull over in a shopping plaza parking lot and open up the apps to see if there was anything interesting nearby. I threw out a couple of “woofs” after checking out some profiles. I don’t mind picless profiles. Sometimes you find some gems that don’t post pix for one reason or another. The wording in one particular profile caught my attention. Under the What I Do tab was the sentence, “I babysit society.”

My opening message was “I’m guessing you are fluent with handcuffs.” He responded with yes. I then asked if he wanted to lock up me and get serviced. He responded by saying he is a sub pig bottom. I came back with, “Can I lock you up and give you a load then?” I told him I had my own cuffs, but would prefer to take his off his belt off his body to lock him up. He said he didn’t keep his gear there. He stated that he liked boots and man scent. I told him I had boots with me and could use the underwear I had on all day yesterday to give him some scent. I also hadn’t showered.