This is a special adaptation of the opening chapters of “The Trainer” by Alex Ironrod for MetalbondNYC,com, posted here by special permission.

I owe my life to one man. my life – and much more. He saved me. He trained me. He educated me. He loved me and had to let me go. Shit, how much I regret never having told him I loved him – until it was too late.

My name is Dave Coyle. My real life started only a year ago, when I met Mike Harrow. I was a mess. I had been doing drugs, when I could find the money. When we met, I was homeless, living on the streets. One summer morning, I was desperate enough to try to hold up this convenience store. You know the kind. They sell everything from liquor to washing powder. Anyway, I stuck this thick stick under my grubby tee shirt, and picked a quiet mid-morning time, after the breakfast rush.

I was lucky, the place seemed empty. So, I marched up to the counter and growled at the clerk, “OK, this is a stick-up. Hand over your cash right now or I’ll blow you to….”

END_OF_DOCUMENT_TOKEN_TO_BE_REPLACED 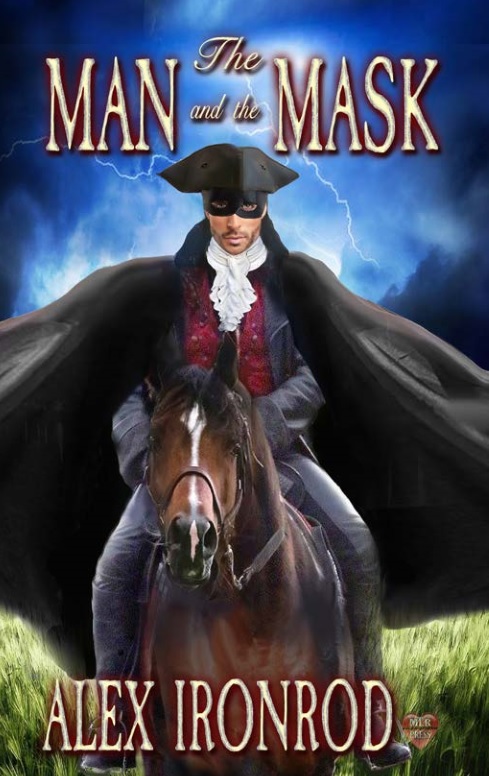 This novel is available as a paperback and as an e-book on both Barnes and Noble and Amazon.

His current series has led two young LAPD homicide detectives through the worlds of murder, fast cars, kinky lawyers and unusual businessmen. Starting with LEATHER NIGHTS and LEATHER DAYS, the detectives find a common interest in leather and form a leather relationship.  Danger and challenges lead them to leave the department and become private investigators.  DECEPTION-PALM SPRINGS and CAGES-CATHEDRAL CITY bring the two out to the desert resort area, where they find intriguing new problems and interesting new clients.

Alex likes to vary his genres.  He has written two historical novels. RED KNIGHT RISING is the product of his interest in life during the Middle Ages. The story follows the challenges that face two young gay men, as knights under King Richard the Lionheart, when they follow him across Europe and into battle during the Third Crusade.  Ironrod’s novel, THE HIGHWAYMEN, takes readers into the bawdy and dangerous world of London during the mid-Eighteenth Century.  Two very different men meet under surprising circumstances in the book. They bond together, but are forced to flee to the American colonies, when one is sentenced to death.  Additionally, Ironrod has two volumes of short stories set in different countries and centuries – THE IRONROD CHRONICLES, Part I & Part II.

Details of all his books can be found on at www.alex-ironrod.com.

Now semi-retired, the author relishes other activities, including acting and directing in theatre (Three Desert Theatre League Awards), researching projects, participating as a charity board member and mentoring aspiring young actors. He has a passion for western style horseback riding. Most important are the relationships in his life, particularly with his new partner Michael and butch, as well as enjoying the camaraderie and support of friends across the world.

THE IRONROD  CHRONICLES – PARTS I and II

It was not a good night’s rest; the hog-ties prevented that, but finally they both slept, exhausted from the day’s torments.

It was evidently morning when they were kicked awake by a group of warriors and their rawhide ties removed. There was no sign of Red Feather, but the interpreter was there to explain: “You will be taken out and purged, then taken to the stream for washing and cleansing. You must be prepared for this evening’s ceremony when the chief will fuck each of you in front of our community to show your slave position as his new squaw men. Now to work.”

END_OF_DOCUMENT_TOKEN_TO_BE_REPLACED

“God in heaven, Billy, what have I done to us,” the Lieutenant choked out. “I can feel things crawling all over me, and I’m erecting again.”

“Try to relax, Tom, “ came the grunting reply. “You need to keep your courage up as well as your cock. We have to bear it.”

He got only a sigh of despair and a groan of anguish from the head next to him, as Tom tried to move his body. Bright shuddered in turn; his back felt as though knives were cutting him, as the flies drank his slobber and the drying piss.

The soldiers lost track of time in the hot sun; men and women passed them by; some spat at them, one or two pushed them onto the thorns; the flying insects bit and crawled on their naked bodies. At last the group of Apaches returned, unpegged their ankles, untied their arms and pulled them off the cactus. Spaulding shouted in pain; the sergeant bit hard on the rawhide, as they were raised upright and allowed to stumble back to the chief’s tepee.

There they collapsed, shuddering, on the floor, with dirty fly-speckled chests and matted hair, and bleeding backs and butts. For a few moments, neither spoke as they tried to recover. Bright managed to undo the rawhide tightening in his mouth.

END_OF_DOCUMENT_TOKEN_TO_BE_REPLACED

His arms were tired; he’d been pulled along at the end of a rope behind the pinto horse for several hours, wrists bound with rawhide – chafing despite his heavy yellow deerskin gauntlet gloves. And his feet hurt. He cursed himself for wearing his good cavalry boots and spurs- they made him look great in the saddle, but pinched after an hour or so of stumbling along rocky trails. And his head ached from the bullet graze, which had got him into this mess.

He looked over his left shoulder at his companion. Sergeant Bright seemed to be faring better than his lieutenant was, although he too was bound behind another Apache horse. But Bright was rugged after years in the cavalry, and, at 6’ 2” topped Tom Spaulding by a good three inches. There was a sudden commotion, as the sergeant tripped over a rock on the narrow path and was being dragged along, scraping chest and legs over the uneven ground.. The leader of the Indian band of raiders snapped out an order and Bright was able to scramble to his feet, blood seeping down his arm again.

END_OF_DOCUMENT_TOKEN_TO_BE_REPLACED

The Iceni warrior, Vertigen, came to with a groan and an aching head, slung, bound and gagged, across the saddle of the Roman cavalry Prefect Marcus, who was walking his tired horse in the early dawn, accompanied by his giant decurion Maximus. Both soldiers had been captured in battle and tortured by the Iceni tribesmen in a revolt against the Romans – and the Brits had been winning. Marcus noticed the movement in front of him, “Well, he’s awake at last, Maximus. You must have given him a bloody good clout back at the camp, as we’ve been riding for hours. Good morning, my lord, how the hell are you feeling? I bet you don’t remember us taking you from amongst your drunken troops, and making our escape last night. Now, we can rest for a few minutes. I think we’re sufficiently far away from any pursuers.”

The decurion swung down and pulled the prisoner to the ground. “Take his gag out, untie his feet, and give him a slug of this foul honey drink of theirs,” ordered the prefect, climbing off the large grey, “Fortunes have turned again, Vertigen, and you’re my prisoner, as you were a few months ago. Now that we’ve fucked and forced one another, you could say we’re even in our sex war, but, as a Master, I can’t forget my treatment at your camp.” “You Romans are so bloody high-and- mighty, invading our country, insulting my Queen and raping her daughter,” snarled the prince.

END_OF_DOCUMENT_TOKEN_TO_BE_REPLACED

The Roman cavalry Prefect groaned under the weight of the heavy wooden yoke roped across his shoulders; his dirty, sweaty, naked body was still covered with splatters of blood from his murdered partner-slave and from the brutal whipping he had just received from the barbaric Iceni tribesmen who had captured them in the recent battle. Now he was being transferred into the hands of tall, tanned and tough Prince Vertigen, whom he himself had fucked when the Iceni chief had been his prisoner briefly, and who now smiled grimly at Prefect Marcus.

“Your stupid leader’s brutal treatment of Boadicea, my queen, has only served to unite the tribes of Britain against you pig-headed Roman invaders. We want revenge – and I’m going to exact a personal revenge on you for forcing and fucking me in your winter camp. If that’s the way you treat senior prisoners, then let me show you what we can do. Bring that giant oaf decurion with him and drag them over to this corner here.” Marcus was pulled along by the hemp rope round his neck and watched as his assistant was hauled to his feet in chains. The giant Maximus limped badly from a leg wound, which had hamstrung him in the battle.

END_OF_DOCUMENT_TOKEN_TO_BE_REPLACED

This story is set soon after the Roman army’s invasion of Britain, then an island on the edge of civilization. Details of the constant guerilla warfare and the revolt led by Queen Boadicea of the Iceni Tribe in 59/60AD are true; the Romans eventually won; the rest is my imagination.

Roman legions were great fighting machines, commanded by a Legate, who was usually a political appointee, as were many of the other senior officers. Centurions were the sergeant-majors, the backbone of the army, except in the cavalry, where the rank was Decurion, and the head of any cavalry outfit was ranked as Prefect. Man-sex was an established fact of Roman society at all levels, including the sexual master-slave relationship.

The whip cracked round the naked body chained to the column, laying another stripe across the prisoner’s buttocks. The man groaned again, but still did not speak.