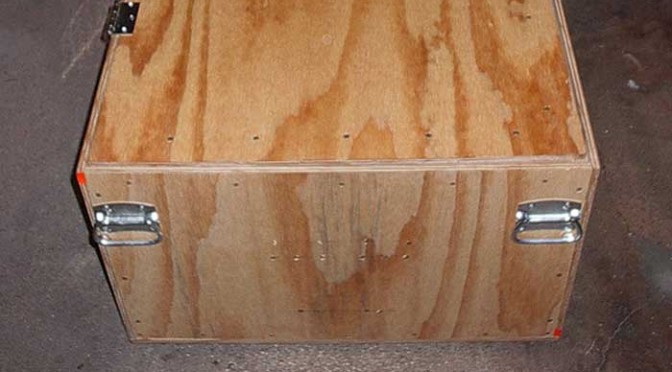 The builder of this confinement box sent the following information:

How did this all get started? A bondage buddy (BB) was coming to town and we usually have some good, intense bondage — switching out who tops the other. Summer is my busy season for construction, so I was hesitant to commit to more than a half day or overnight. But my body is always stronger and more aggressive in summer, and my hormones more active. So as usual, he talked me into more time. The next email planning effort with BB led to me agreeing to two weeks of self-enforced chastity and then locking into my metal chastity cuff the day before he arrives. By this point my hormones were swimming with arousal and I could be talked into far more than the frontal lobe would normally think smart. Knowing this, BB starts hinting that one of my fantasies about tight confinement in a coffin-like box could come true. All I need to do is build the box — after all, he said, “You have the tools and know-how, so how long could it take?” He was so matter-of-fact and what he said was ridiculously true, so I quickly said yes. For the next two weeks before his arrival, my hormones were roaring. He has talked me into a longer session, two weeks of not cumming AND talked me into building my own prison — a confinement box. Then he adds a requirement that anytime I work on it, I must be wearing my metal chastity cuff! So I cut, screw and glue together this box, all the while clanking my chastity cuff against it, and carefully plan out my air holes so I don’t suffocate and planning where the eye-hooks should go to allow him ample ways to tie me into it. See where he had my poor head going? Right where he knew my dick would take me — even deeper into something twisted, inescapable, confining and very dark. Of course I realized this but couldn’t do anything but admire him and quickly give into my bondage-greedy instincts. So the next feature coming to my head via my dick was a padded floor on the box so I have no excuse for “sore back” to scream “let me out.” Next my dick (thru a then empty vassel called “my head”) sends a signal to order lots of furniture foam off the web cause it’s cheap at it can be stuffed in on top of me and around me to make sure sounds are muffled, I can’t move and there is constant pressure on me. What a genius dick I have! Oh, but it’s not just my dick that is thinking here, it’s my buddy as well. He sends an email directing me to get some old boots and screw them to the floor panel of the box so that when I’m inserted, I can be laced tightly to the bottom panel — one-with-the-box! ‘GENIUS’ my dick thought while directing my fingers to search the web for a cheap used pair. Bingo. Boots found, attached and ready for feet — feet that thankfully don’t think like my dick or I’d really be in trouble. Last touches were a hinged lid with two big locking clasps on the opposite side and four carry handles on the outside. Oh, and finally, did I tell you that in the middle of all this dick-induced bondage-box building frenzy, my buddy got me to agree to a two-night session? Wish he had talked to me instead of my dick cause I might not be in this predicament right now.

This picture has been making the rounds on various sites lately. I have no idea of the original source. If anyone knows where this is or who built it, please let me know!

Check out the pictures that leatherdog sent: