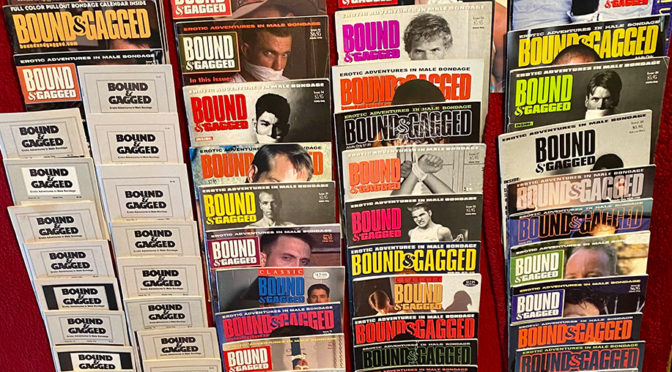 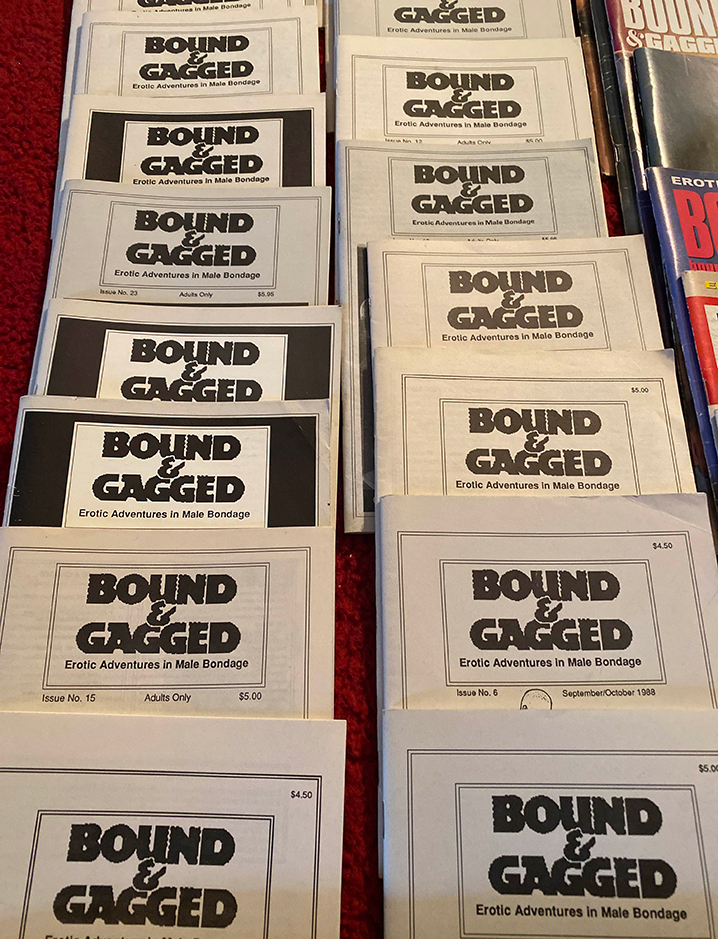 As well as what looks like a very large selection of vintage VHS male bondage tapes, including titles from Zeus, Grapik Art and others: 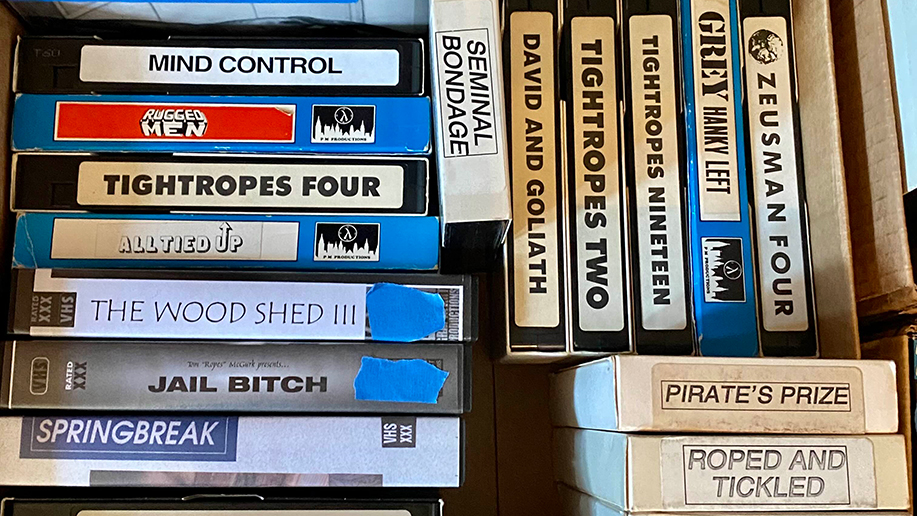 I don’t know who is selling these items, but I do hope they find a good home! 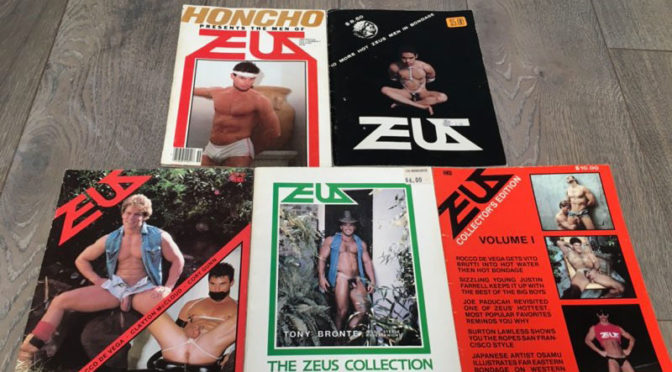 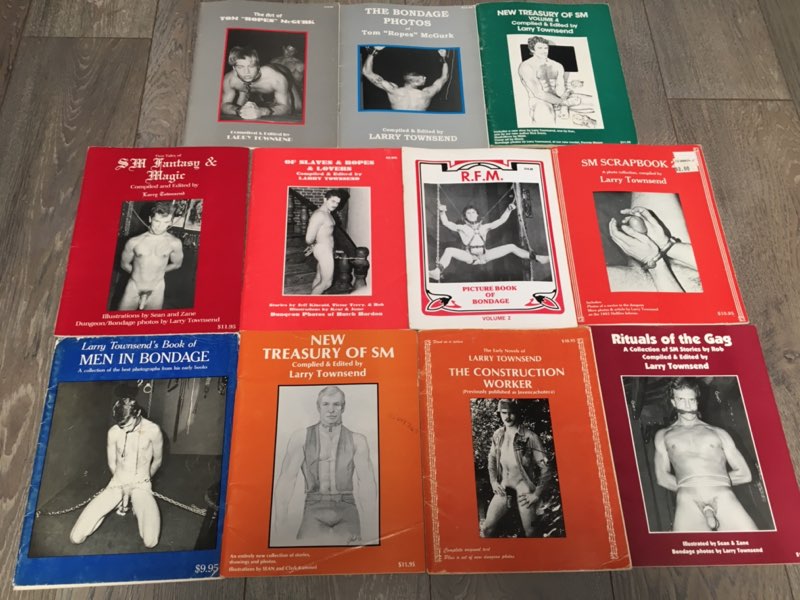 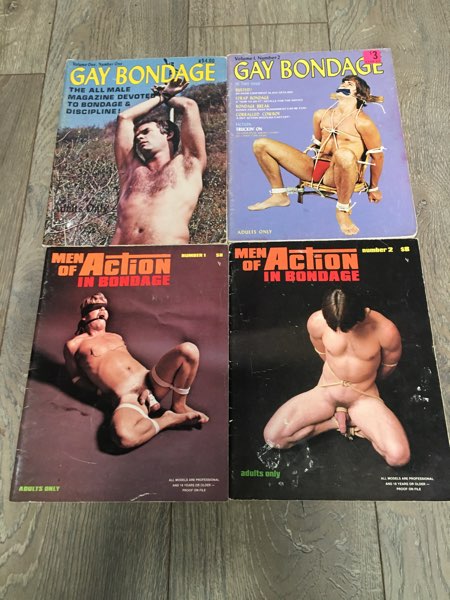 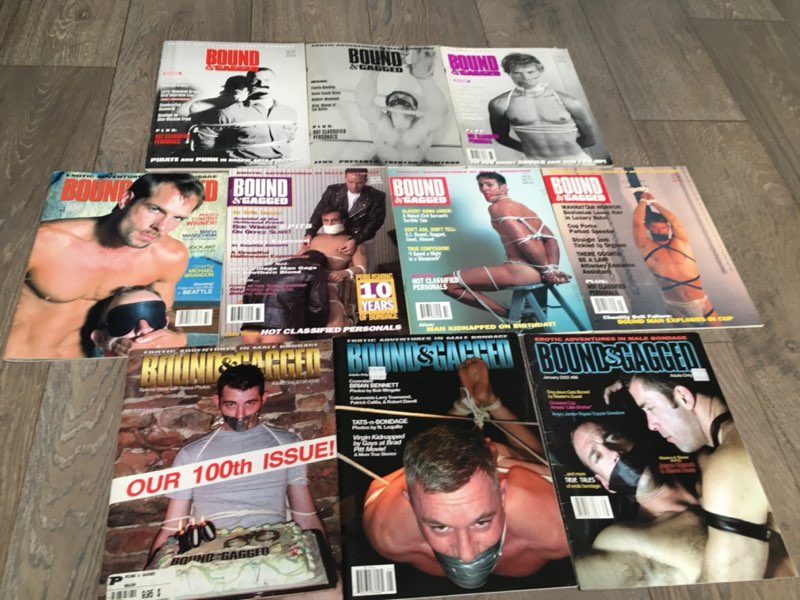 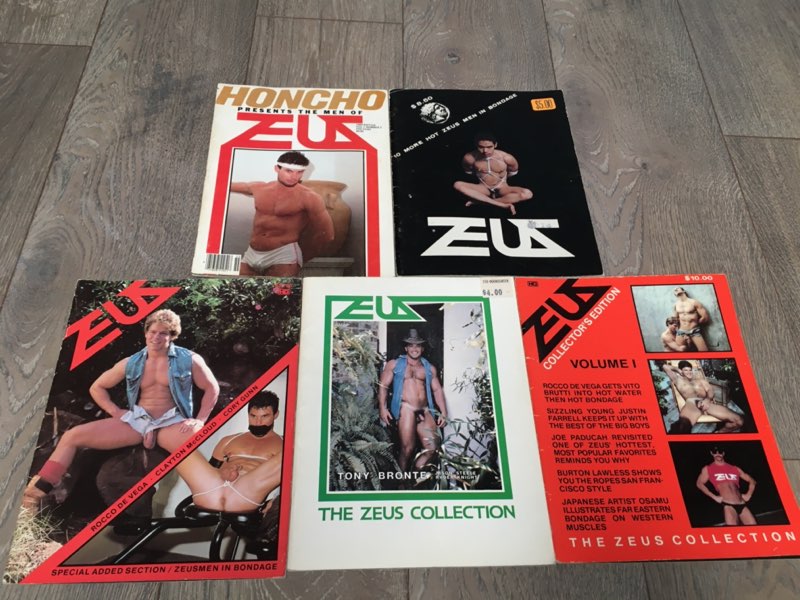 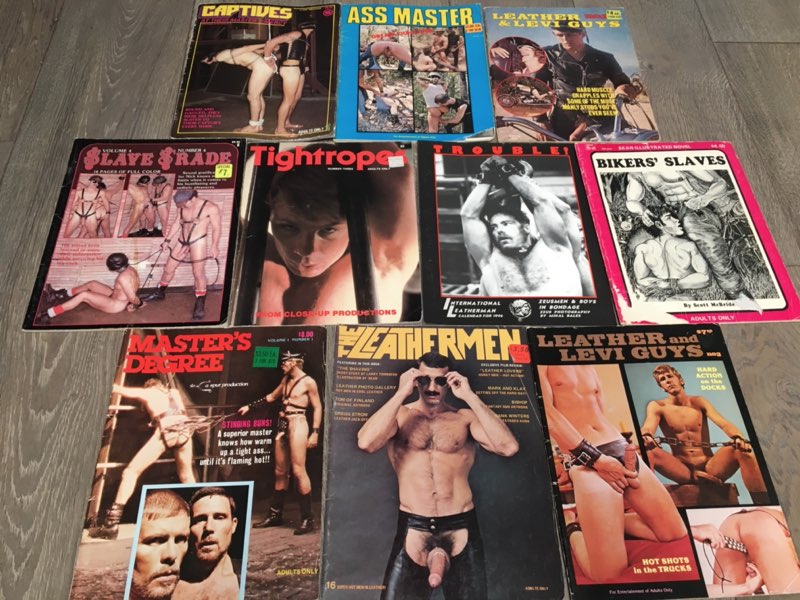 These magazines are from the pre-VHS, pre-INTERNET days — when the only source for such materials was to visit adult bookstores! Some time ago…

To inquire about this collection, visit ropesnyc on Recon 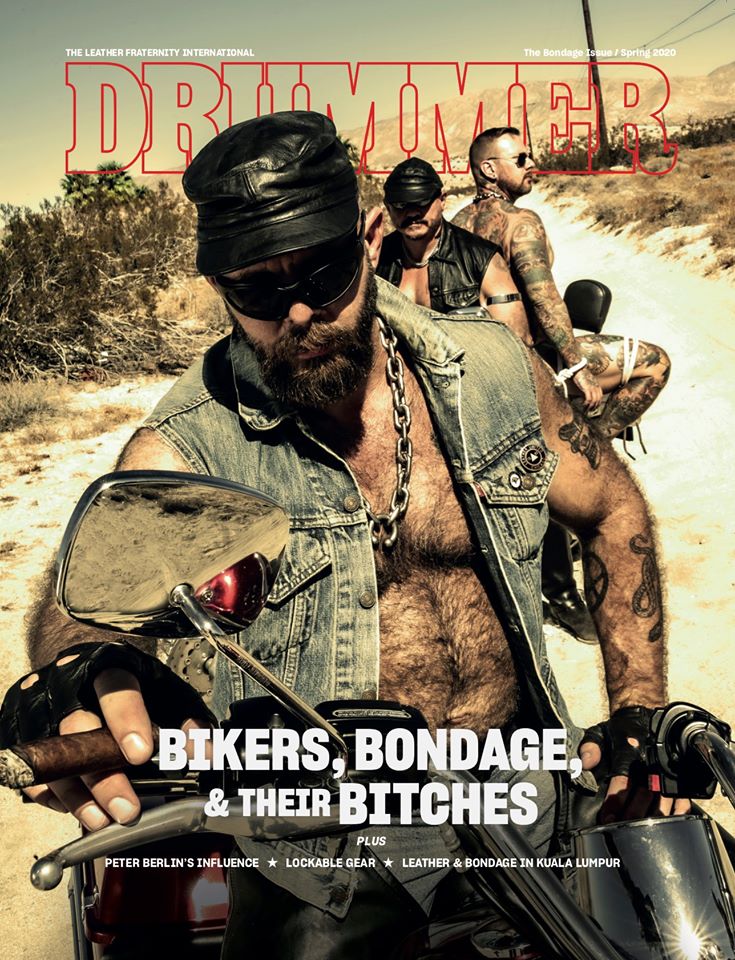 Click for Drummer. You can get a digital or a print subscription 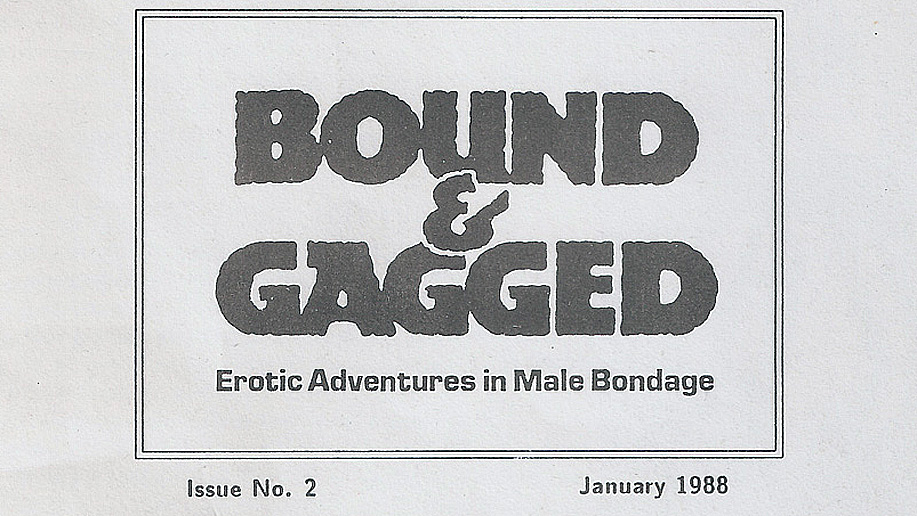 It’s impossible to describe the amount of excitement receiving a new copy of Bound & Gagged magazine in the mail in its discreet brown envelope caused me, every other month, back in the day. In addition to providing endless hours of jackoff material, this magazine literally changed my life. Learning about the existence of a bondage club with weekly meetings in NYC was a huge incentive for me to move here! And I met many men through the bondage club and in the Bound & Gagged personal ads — several of whom I am still friends with to this day. 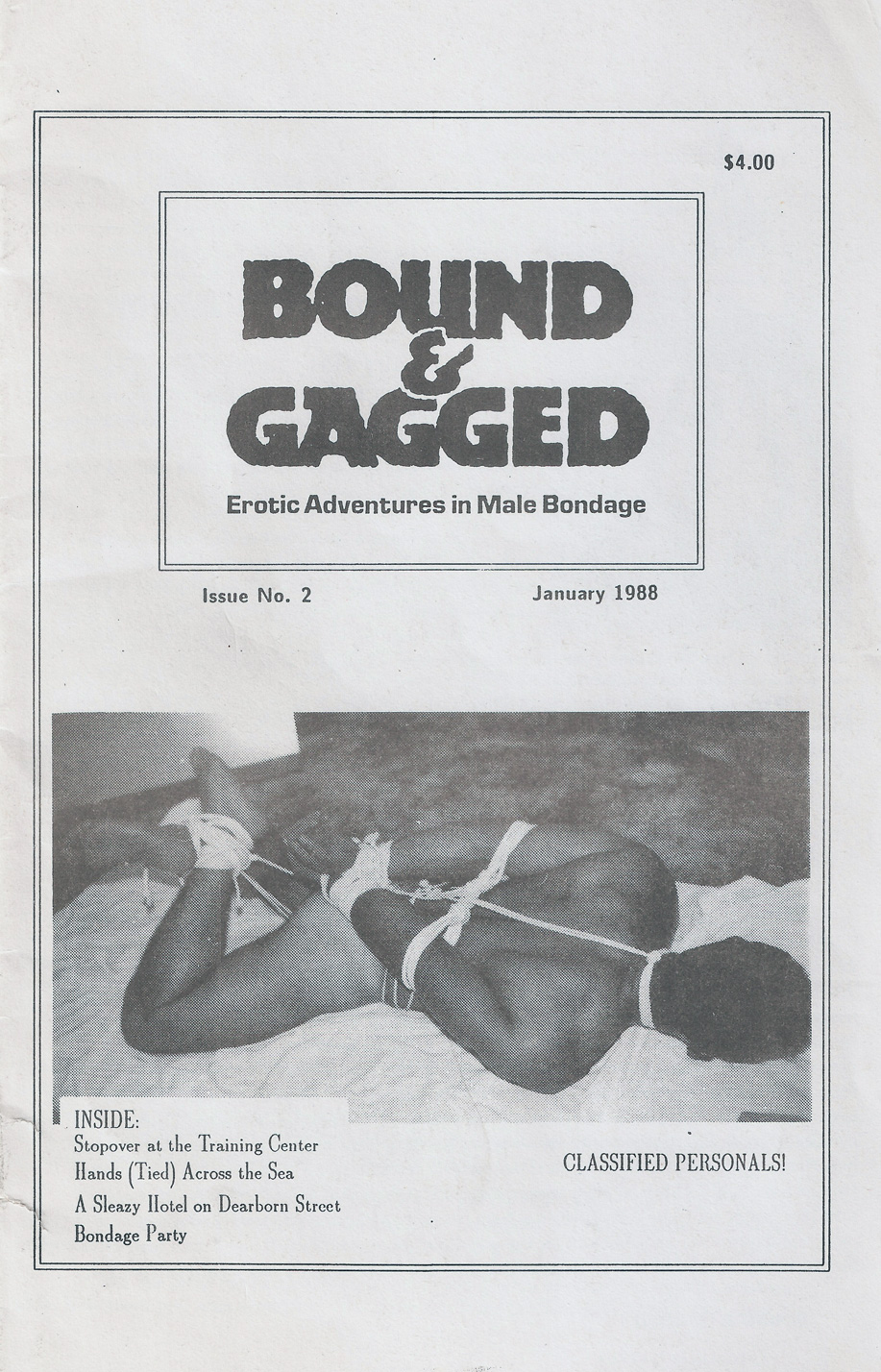 To my great delight, Bob Wingate, the editor and founder of Bound & Gagged and also the founder of the New York Bondage Club, recently revived his personal blog — located here — and he’s also started publishing eBooks — available here — with some of his magazine’s greatest hits.

Check out the cover of the new Drummer magazine: 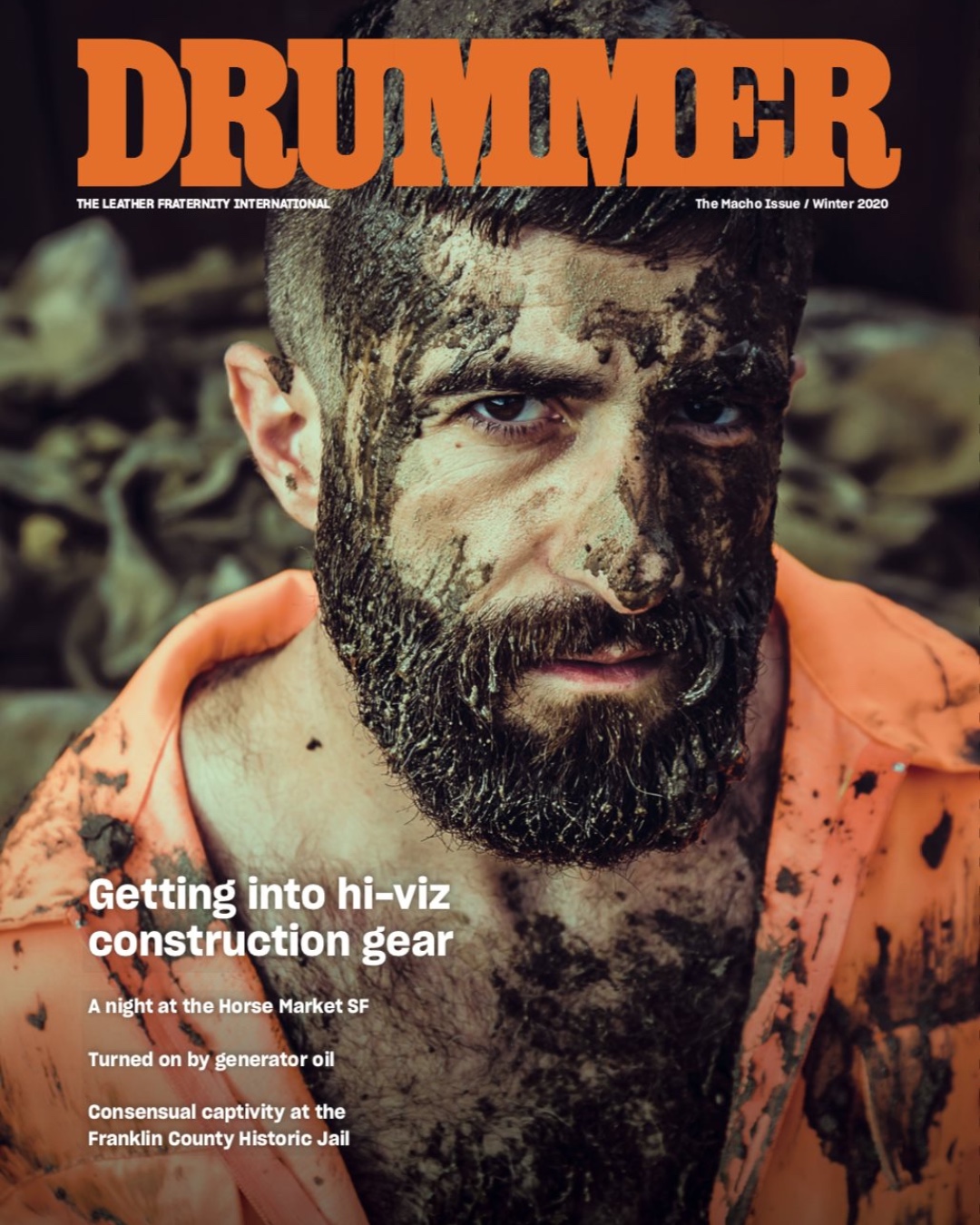 This heaviest of kink magazines is BACK! You can get a digital subscription or subscribe to it in print! You can even purchase a copy at various retailers, including The Leather Man in NYC, Rough Trade Gear in California, and others.

Article about some of their best vintage covers here 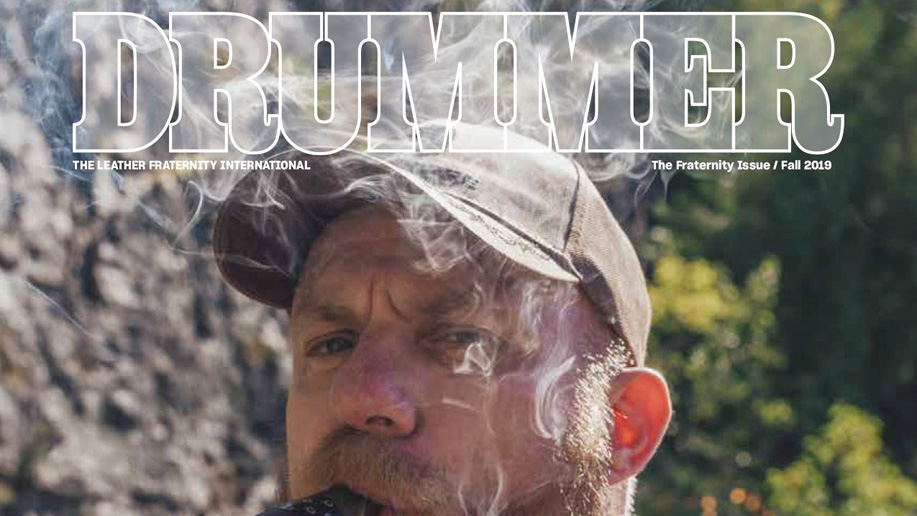 Drummer magazine is back! They just put out Issue 215, which you can download NOW for FREE from DrummerMen.com: 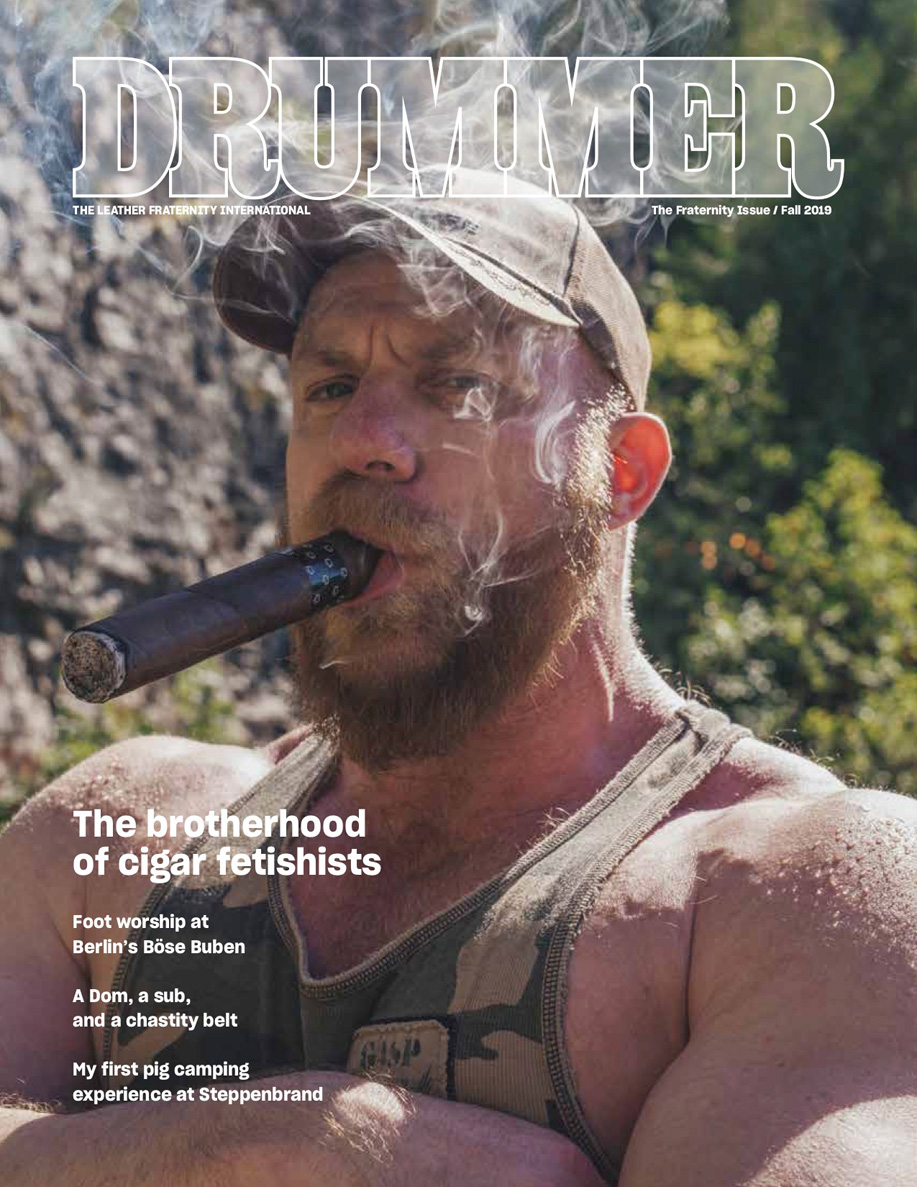 After this week, you can get an annual paid subscription for the digital edition. Fucking hot if you ask me! 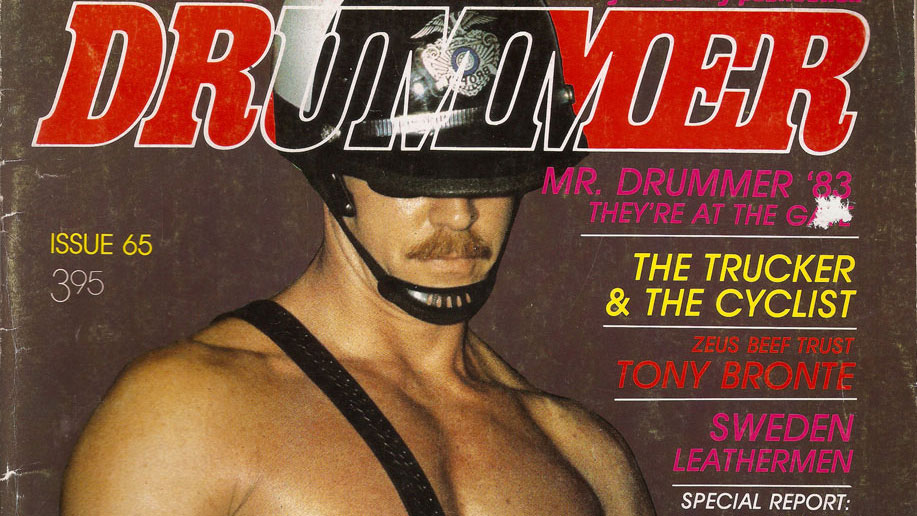 “If a man does not keep pace with his companions, perhaps it is because he hears a different drummer. Let him step to the music which he hears, however measured or far away.” 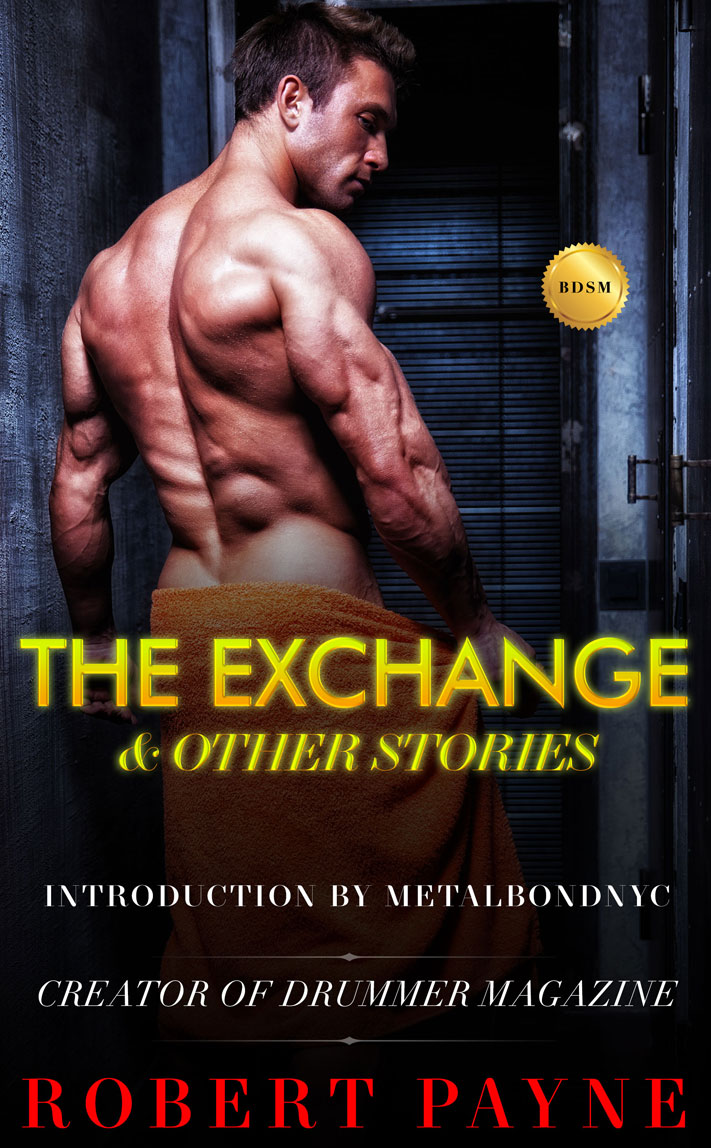 The stories you are about to read were written in an earlier time. In this prehistoric era there was plenty of BDSM-themed kink, but seeking it out was way more challenging than it is today. There was no such thing as a hookup app for your phone. Phones didn’t fit in your pocket back then. They were plugged in to the wall at home, and there were only two kinds: rotary dial and push button. Nobody had a blog or a social media presence.

People were concerned then with many of the same things as today, including the economy, pollution and crime. Because people tended to carry cash on them, there were more burglaries and muggings. No matter where you lived, everyone knew that Times Square was dangerous. Going downtown in any city was dangerous.

But if you were gay and happened to be excited by things like bondage and leather, venturing downtown at some point to try to find a magazine or two might be worth the risk. Growing up before the internet existed made exploring secret fetishes involving kink much more tricky. Before cable TV there were just three channels, and if you wanted to watch something different you had to get up and turn the knob. Every once in a while something listed in TV Guide would be the source of intense interest, such as a television special on Houdini. You might have grown up fascinated by the predicaments that the Caped Crusader and his sidekick found themselves trapped in at the end of almost every episode of Batman (the TV show, not the blockbuster movies of later decades). At the movies, “Cruising” with Al Pacino sure looked interesting — if it was playing in your local theater and you could scare up enough courage to go.

END_OF_DOCUMENT_TOKEN_TO_BE_REPLACED 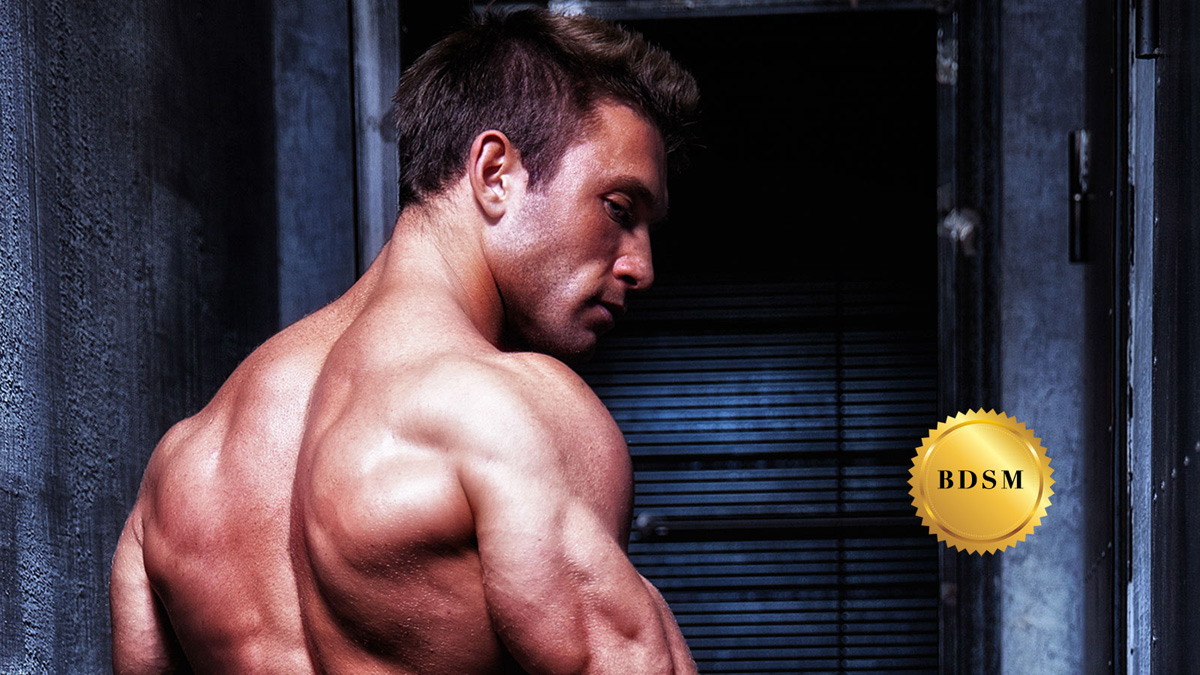 Robert Payne (aka John Embry, of blessed memory) was the founder of Drummer magazine, and he was also author of many male bondage stories. Now, one of his tales — “The Exchange” — is being published as an eBook. I was asked to write an introduction, which you can see in the “look inside” preview of the eBook, which is now available on Amazon: 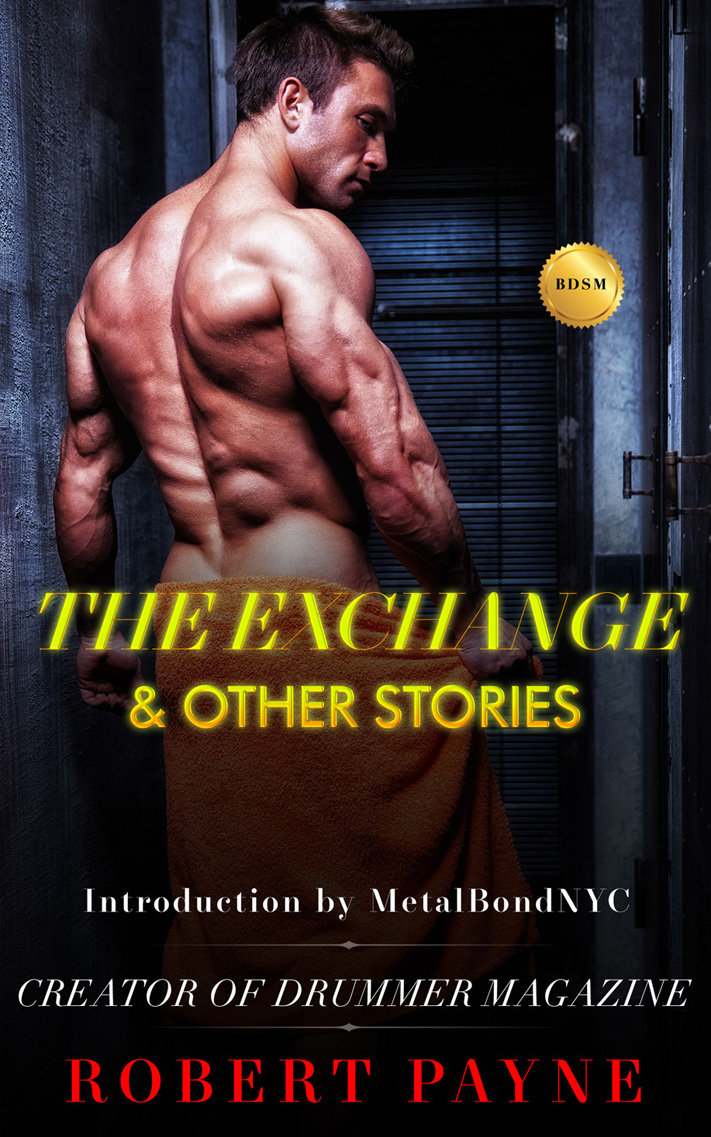